More expensive than competitors, but a solid service with some useful add-ons.

Founded in 1994, Giganews is another veteran in the Usenet space. It has accumulated 10 million users in 180 countries, with software and support in 10 different languages. Giganews offers some enticing extras that pair well with its standard Usenet service including a VPN, a Usenet browser, and a download accelerator. Let’s see how it stacks up against the competition for retention, security, settings, features, support, ease of use and pricing.

Giganews offers five different tiered plans. Only credit cards and PayPal are accepted, with no option to use Bitcoin or other third-party payment systems.

Our readers can get 50 percent off Giganews and its VPN in their first three months through this special promotional offer.

When it comes down to cost-per-GB, Giganews is more expensive than its average competitor.

A 14-day free trial is available, which includes a 10GB data cap, 20 connections, and the full retention period.

Giganews claims to have 120,000 newsgroups at its disposal along with with 2,367 days of binary retention. Text retention is even longer by a couple years. The company guarantees it can max out your connection’s download speed. Giganews says it writes all of its own server software to optimize performance.

Giganews states it offers 100 percent completion and uptime, with zero maintenance outages. That’s a big claim to make, one that the other big-name tier-1 Usenet providers aren’t even prepared to make (they instead posit 99 percent completion).

In our testing, Giganews performed as promise. We only ran into a single broken download, which likely occurred due to a DMCA takedown. Even files posted a few years ago downloaded with no issues. Download speeds were always maxed out.

The company operates its own servers in four countries in the United States and Europe, including the UK and the Netherlands. Giganews is based in the United States, making it subject to DMCA takedown requests on certain files. For this reason, we recommend Giganews customers at least purchase a backup block account from another provider on a different tier-1 network.

Every account can be used with Giganews’ Mimo Usenet browser, which makes it easy to search for and download NZB files all in one native desktop app. 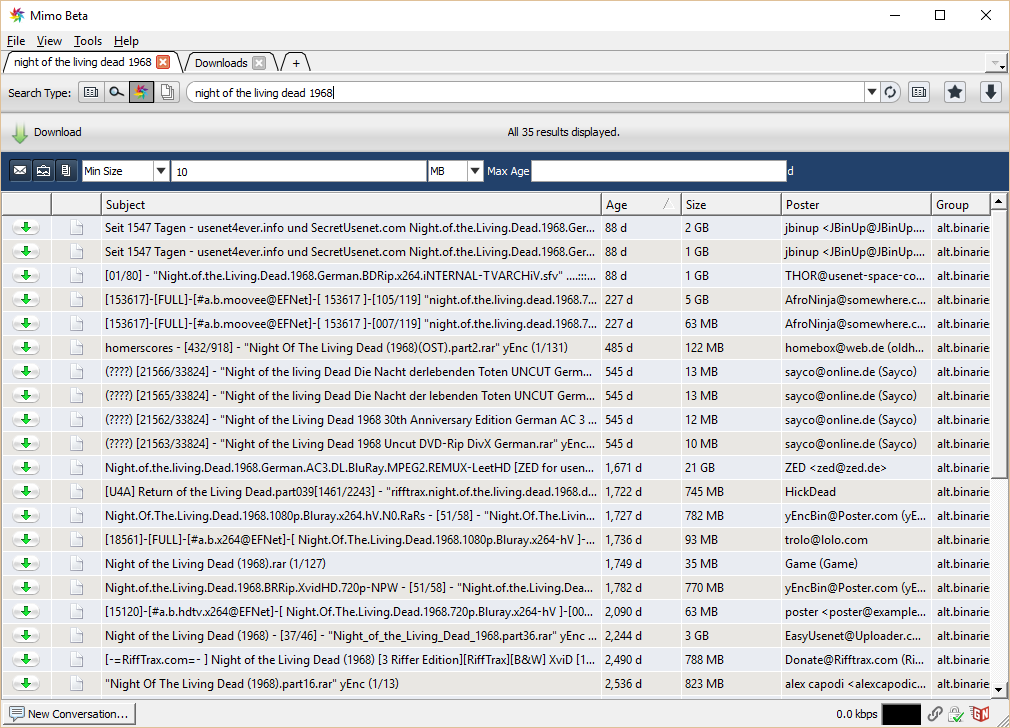 You might have spotted some older references to some Giganews accounts including free cloud storage via Dump Truck, another Golden Frog product. Unfortunately, Golden Frog has discontinued Dump Truck, so the offer is no longer on the table.

Giganews users can take advantage of 256-bit SSL-encrypted transfers, which prevent ISPs and other snoops from viewing what users are downloading.

The Mimo browser wraps an indexer, NZB creator, and download manager all into a single convenient program. Users can easily search for files and sort them by name, age, newsgroup, size, and poster. Age and minimum file size can be specified. SSL is enabled by default, and the Giganews Accelerator is enabled by default. Users can also bookmark their favorite newsgroups. Novice users will find having all these capabilities in one place extremely convenient compared to setting up a newsreader and registering with an indexer separately.

Mimo comes with a few hangups, however. First of all, search results can’t be sorted by the number of “grabs”, a loose term for the number of times a file has been downloaded by other people. This is often an indicator of a file’s quality, and without it finding reputable NZBs can be hit and miss. Also missing are file previews, which are useful for judging whether video files. When a file failed to download, its status in the download manager got stuck in a “pending” state rather than displaying a proper error message. 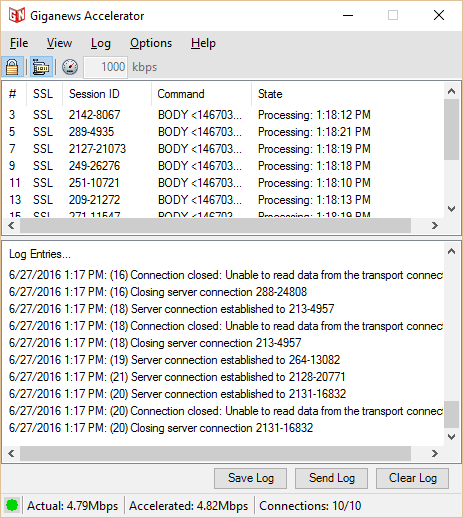 The Giganews Accelerator is built into Mimo, but can also be run as a separate process. Users can download it from the website and install it, after which it must be configured on localhost port 119 through an existing newsreader app like SABnzbd. Keep in mind that the Accelerator SSL-encrypts traffic itself, so SSL must be disabled in the newsreader. Once setup is finished, header files will be compressed to speed up downloads. The app also allows users to set a rate limit if they wish to save bandwidth.

The top two Giganews plans include a free VPN service courtesy of VyprVPN. The partnership between Golden Frog, VyprVPN’s parent company, and Giganews is an interesting one. VyprVPN has been known to terminate accounts of users who torrent copyrighted material and keeps an unseemly amount of logs on customers, yet it supports Giganews Usenet users who undoubtedly pirate a fair amount of copyrighted material as well. You can read our full review of VyprVPN here.

In 2014, a former Giganews employee alleged the company was at least partially run by the US Federal Bureau of Investigation (FBI). The employee leaked the information to several tech news outlets. Nick Caputo, the employee, alleged that he was instructed to remove child pornography from servers owned by Data Foundry, a data center company closely affiliated with Giganews. He was later reprimanded for doing so and the content was restored to the servers so as not to jeopardize ongoing criminal investigations. Caputo went on to claim that all Giganews users were being logged and all the content shared on the network was going through federal authorities.

Included in Caputo’s file dump was a list of employees, some of whom were allegedly employed by the FBI. Giganews called the entire scandal a hoax, and got the file dump removed using a DMCA takedown request of its own.

Comparitech feels it is our responsibility to inform readers about this scandal, however it does not effect our final judgment in this review.

If the Giganews Accelerator is enabled, change the server to “localhost” and the port to 119, with SSL disabled.

Giganews is one of the few Usenet providers that features actual 24/7 live support, and not just a ticket submission system. We tried it out for ourselves and got a representative on the line in a matter of seconds. However, the rep was unable to help us with our issue (some of our downloads were hanging) and quickly moved our issue into an email ticket instead. He said multiple experts would be able to review the problem this way. We were a bit disappointed that the live chat rep didn’t make much of an effort to resolve the problem himself. It took about four emails over 24 hours to come to what was a fairly straightforward solution.

The website contains a fairly par-for-the-course knowledge base, FAQ section, and documentation, but it’s not searchable.

We did not receive any unsolicited emails or other communication during our time with Giganews.

We didn’t find anything to abhor about Giganews. The 24/7 live support is a great bonus. We weren’t huge fans of the Mimo browser, but it’s not necessary to use the service. Files download fast and the completion rate is high. The biggest downside is that it’s more expensive than other services when it comes down to the amount of data per dollar. If you are considering trying out Giganews there’s currently a special offer running here.