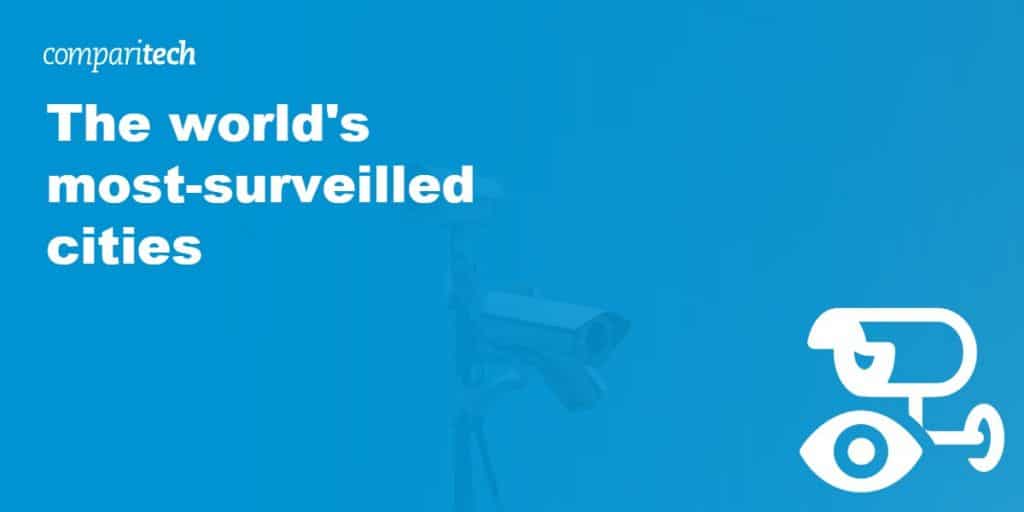 Cities in China are under the heaviest CCTV surveillance in the world, according to a new analysis by Comparitech. But globally, many more cities are under increasing amounts of surveillance.

In 2019, IHS Markit predicted that there would be 1 billion surveillance cameras worldwide by the end of last year (2021). According to the same report, 54 percent of the world’s cameras are located in China, which would equate to 540 million CCTV cameras as of 2021. With a population of 1.46 billion (based on the most recent UN estimate), this means there are 372.8 cameras per 1,000 people in China.

This year, we have used this ratio to create estimated CCTV camera figures per Chinese city. Due to wildly different estimates and old figures, this seemed the most accurate and fairest way to try and gauge the sheer volume of camera figures in China.

Comparitech researchers collated a number of data resources and reports, including government reports, police websites, and news articles, to get some idea of the number of CCTV cameras in use in 150 major cities across the globe. We focused primarily on public CCTV—cameras used by government entities such as law enforcement.

The 10 most surveilled cities in the world – cameras per person

Based on the number of cameras per 1,000 people, these cities are the top 10 most surveilled in the world:

*As mentioned in the introduction, our estimates for Chinese cities this year are based on China as a whole.

**Our previous studies have only found figures for London which may have included private cameras. In this study, we have found sources that have enabled us to create a figure based on public cameras.

As China dominates this list, we have included a separate table with the number of cameras per square mile of each Chinese city. Therefore, this list features the top 10 most surveilled cities in the rest of the world:

As most of the heaviest surveilled cities aren’t in the top 10 most populated cities, let’s see how the world’s most heavily-populated cities compare when it comes to their camera figures per 1,000 people and per square mile:

A primary argument in favor of CCTV surveillance is improved law enforcement and crime prevention. We compared the number of public CCTV cameras with the crime indices reported by Numbeo, which are based on surveys of that site’s visitors. 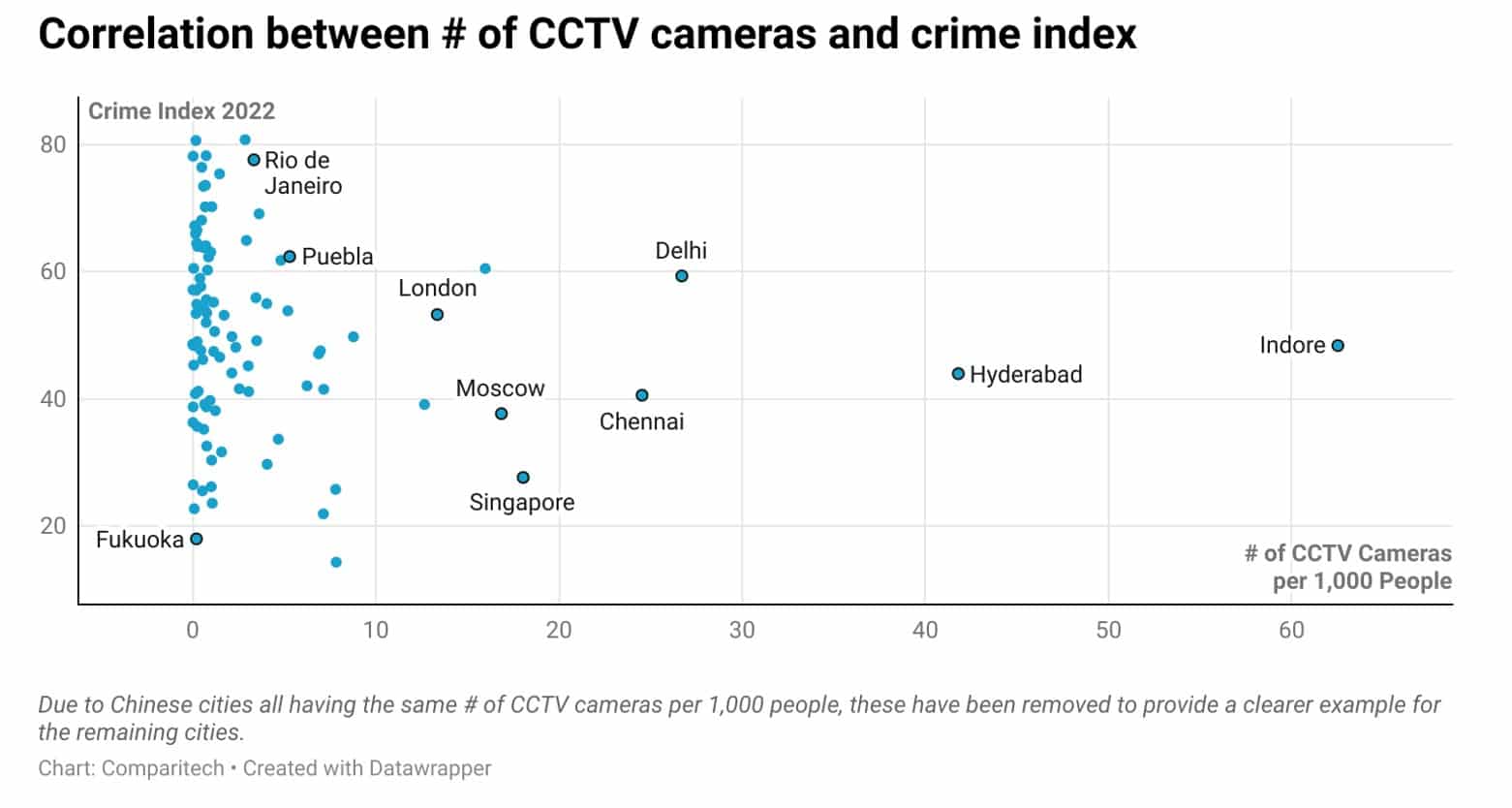 As you can see from the above chart, a higher number of cameras just barely correlates with a lower crime index.

Estimates vary on the number of CCTV cameras in China, but, as we’ve already explored, IHS Markit’s latest report estimates that 54 percent of the world’s 1 billion cameras are located in China, which equates to a total of 540 million or 372.8 per 1,000 people.

While astronomical, we can see that other estimates place similar–if not higher–figures on these cities. For example, in Shenzhen, it was reported that there were 1.34m cameras in 2017 with 16.68m planned (our estimate suggests there are currently 4.78m). And in Hangzhou, in 2014, there were reportedly 130 cameras per square kilometer. Based on a city size of 16,841 KM², this equates to over 2.5m cameras. Our current estimate places it at just less than 3m for 2022.

Furthermore, IHS has provided other higher estimates in previous years. In 2017, it was quoted as suggesting that China would have 626 million cameras within three years. This would create a figure of 432.2 cameras per 1,000 people. That’s nearly one camera for every two people.

Based on these projections, let’s look at the lower and higher estimates for each Chinese city:

While it goes without saying that the highest number of cameras are found in the most populated cities, we can see that some cities will have a far higher density of cameras than others (per square mile). Based on these calculations Shenzhen would have at least, 6,220 cameras per square mile, followed by Wuhan with 5,429, and Shanghai with 4,323 per square mile.

Comparitech researchers collated a number of resources to get an estimate of the number of public CCTV cameras in use. We focused on the world’s 150 most heavily-populated cities but omitted any city where we couldn’t find enough data. This year, the city of Sanaa in Yemen replaced the city of Milan in Italy. Delhi’s population is only for the metropolitan area which our camera figures cover.

Our city sizes were taken from government sources or citypopulation.de where we found the area size that correlated best with the population figures we have. Often, this is the metropolitan area rather than the city as camera figures spread into these areas, especially on subways and buses.

Due to new data from authoritative sources, some figures may be considerably higher or lower than our previous study which relied on some estimates.

Where possible, we have only included public CCTV cameras, including cameras installed on public buildings, cameras used by law enforcement, cameras installed on public transport, and traffic cameras with surveillance capabilities (i.e. automatic number plate recognition). However, in some instances, it may not be clear what cameras are included, meaning some private camera figures may also be included in the totals. We believe this may be the case for Indore.

Most of the data sources used are from the last few years but, in some cases, only older data sources were found. The dates of the sources are listed in our sources sheet.