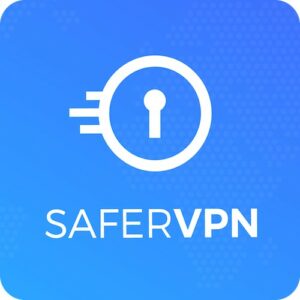 SaferVPN is an Israel-based provider that claims to be the “fastest and simplest” VPN service on the market.
It offers all of the key benefits we’ve come to expect from a reputable paid VPN: better privacy, improved security, and the ability to unblock content on the web.
But how does it perform versus the litany of competition?
We aim to find out…

I’ll cover all that and more in this review.

PRICE WATCH: SaferVPN is currently running a promotion which gives a 65% discount.

I spent a few weeks using SaferVPN and put it through a battery of speed, streaming, and security tests. I used it to secure wi-fi hotspots, privately download files, and unblock streaming sites from abroad.

I’ve summarized my thoughts below, but read the full review to get an in-depth look at SaferVPN.

SaferVPN is an easy-to-use VPN with a couple of handy features like automatic wi-fi protection and 24/7 support. But subpar speeds, limited ability to unblock streaming services, and severe security bugs make it difficult to recommend. It doesn’t work in China.

How does SaferVPN compare to other popular VPNs?

Here’s a table showing how SaferVPN’s key features compare to the competition:

Here’s a summary of what I liked and didn’t like about SaferVPN:

I’ll go into more details about all of these points in this review.

SaferVPN operates 1,300 servers in 50 countries, which is about average for VPN services at this price point.

Across all times and locations tested, SaferVPN average download speed was 36 Mbps. That’s quite a bit slower than average, as you can see from the chart below. 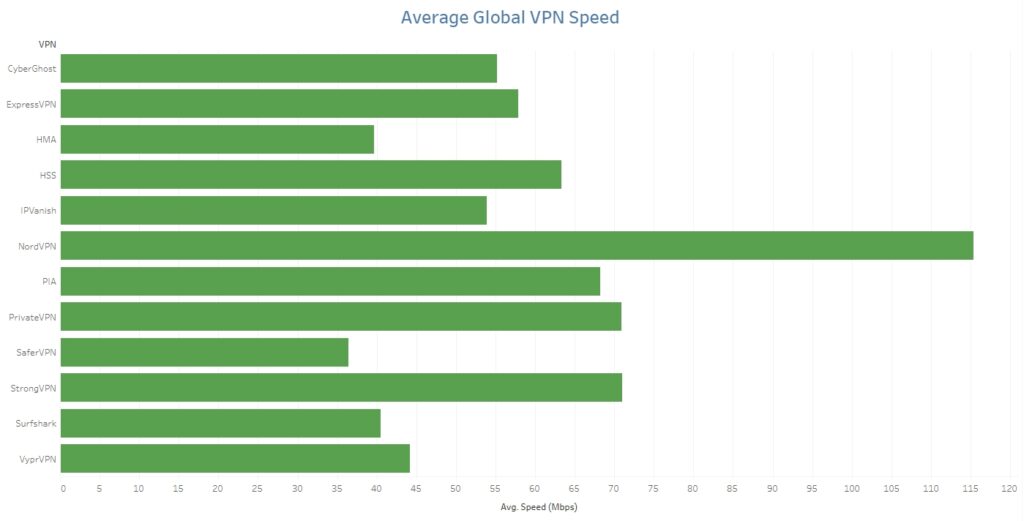 I ran speed tests on servers in North America, Europe, and Asia at various times of day. Here are the results for each region:

Speeds were still fast enough to stream HD video and torrent. I could play online games like Rocket League and Brawlhalla without too much added lag, but your ping time largely depends on how close you are to the nearest server. If you want to stream in 4K, live stream video in HD, or video chat in HD, then it might be best to look elsewhere.

Apps: What devices work with SaferVPN? 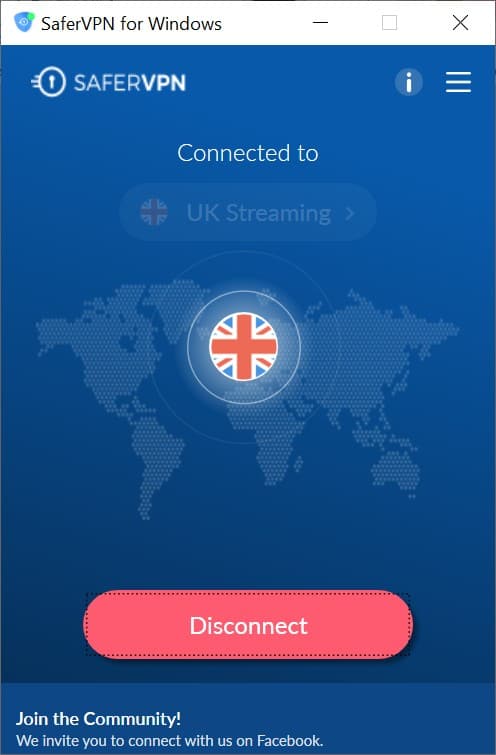 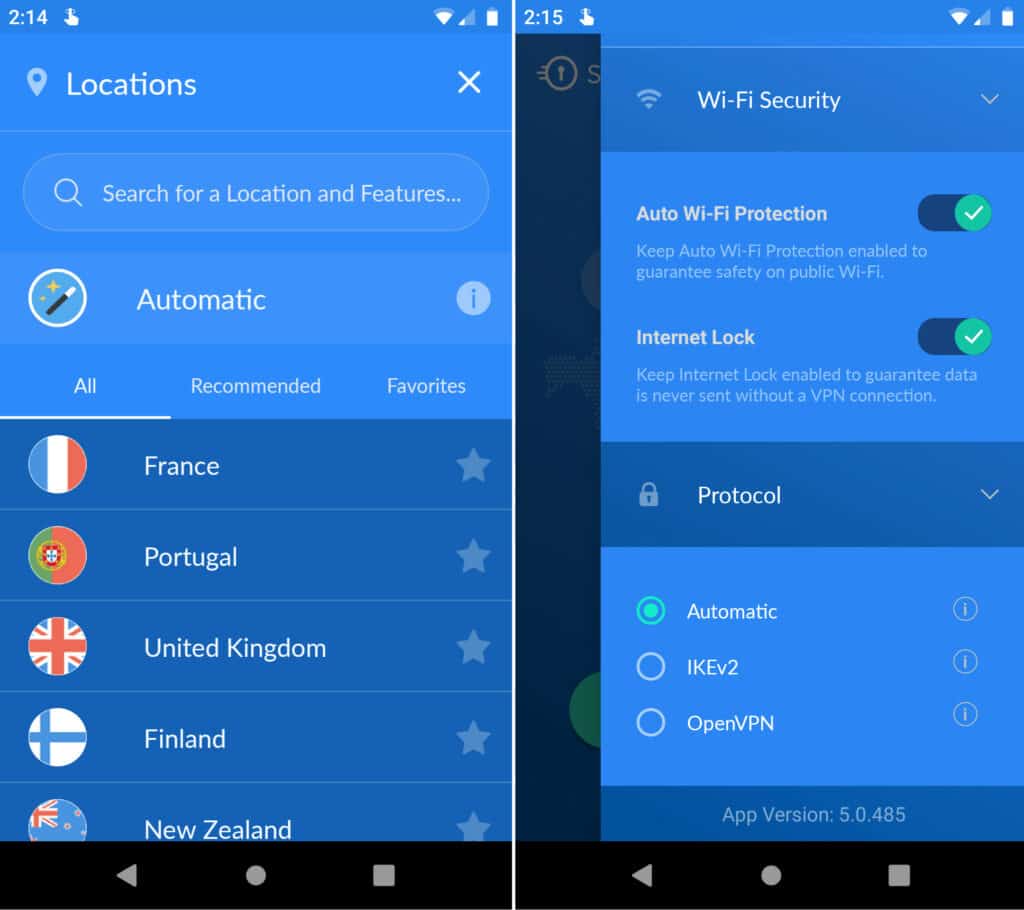 Customized VPN routers are also available, ranging in price from $199 to $299. If you already have a router with compatible firmware (DD-WRT), it’s possible to manually configure SaferVPN on it.

A single plan allows up to five devices to connect at the same time, which is the industry standard.

Yes! I unblocked Netflix US both in a web browser and on the Netflix mobile app. Both the US and UK versions of Netflix can be unblocked with SaferVPN. 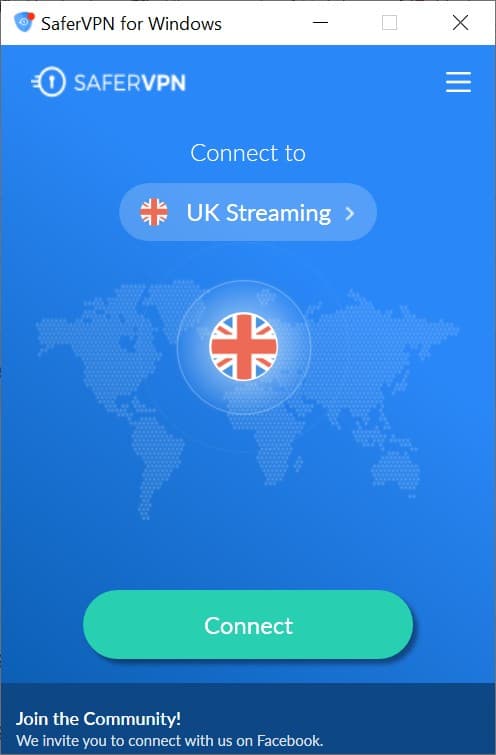 Unfortunately, SaferVPN didn’t fare so well when I attempted to unblock other streaming services. It was blocked by Amazon Prime Video, Hulu, and BBC iPlayer.

Kodi users will find SaferVPN a bit limited. There’s no Amazon Firestick app or Linux app, so you’ll have to use workarounds or manual configuration to get up and running. If you’re using an Android TV box with access to Google Play, you can use the Android app. It should be compatible with any Kodi add-on once set up.

“Use any torrent” is prohibited under the company’s acceptable use terms, as are several other actions, even though the company directs users to torrent on specific servers.

Torrenting is only allowed on the Netherlands, Canada, and Spain servers. While piracy isn’t legal in those countries, they are known for being more lenient to P2P filesharers. 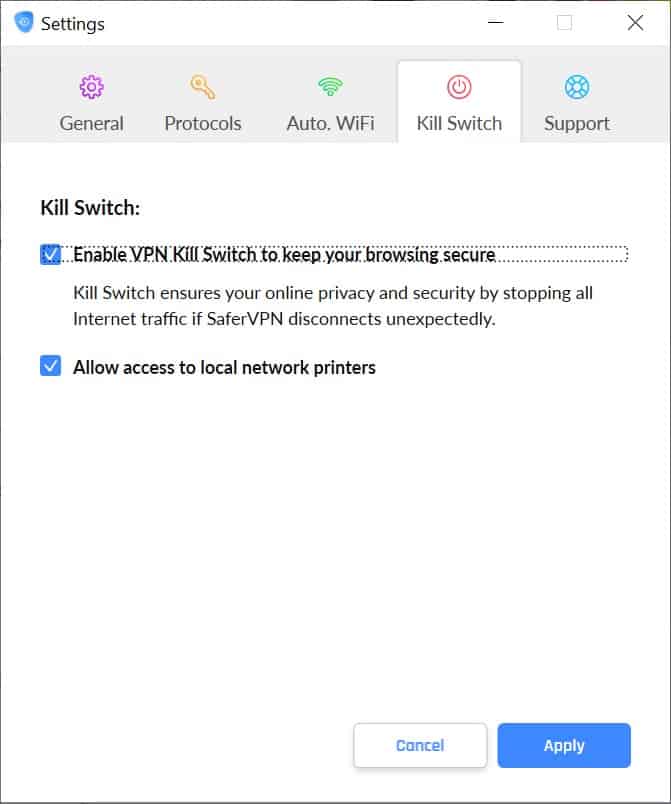 A kill switch can be enabled in both the desktop and mobile apps that stops all internet traffic going to and from your device if the VPN connection drops. This is important for torrenters because it prevents any identifiable data from leaking over a direct, unencrypted connection.

SaferVPN is based in Israel, which might put off some users wary of government surveillance and intelligence sharing with the USA and its allies.

SaferVPN doesn’t log any of my traffic or my IP address. It does store some minimal logs including connection timestamps, amount of data transmitted each session, which location (but not server) I connect to, and which country (not IP address) from which I connect. 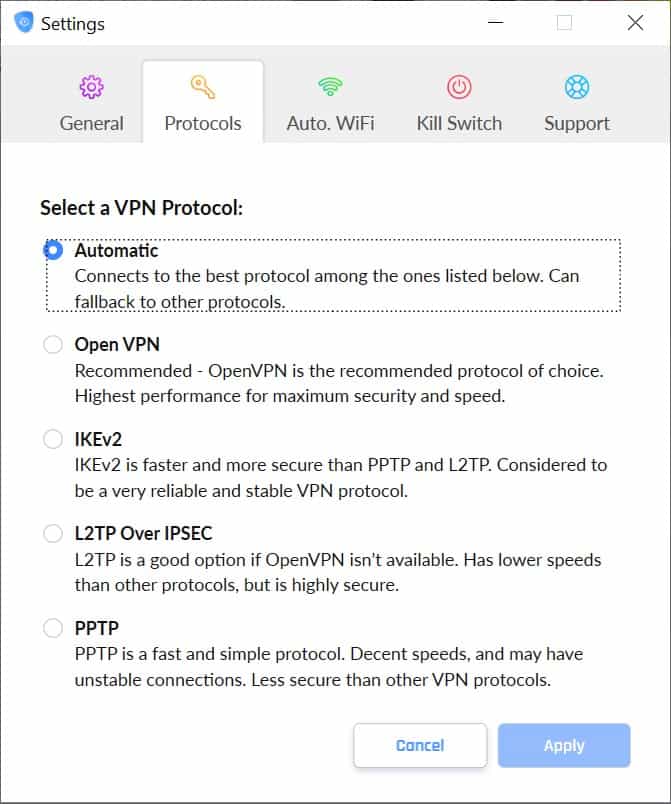 When connected with the OpenVPN protocol, the security is comprised of:

Unfortunately, it does not avail of perfect forward secrecy, so if a key is compromised then it can be used to decrypt traffic from past sessions.

SaferVPN struggles with DNS leaks. Some connections didn’t leak, but many did, defaulting to my ISP’s DNS servers instead of SaferVPN’s. That’s a serious problem if you want to unblock region-locked content, hide your real location, or prevent your ISP from seeing what websites you visit. 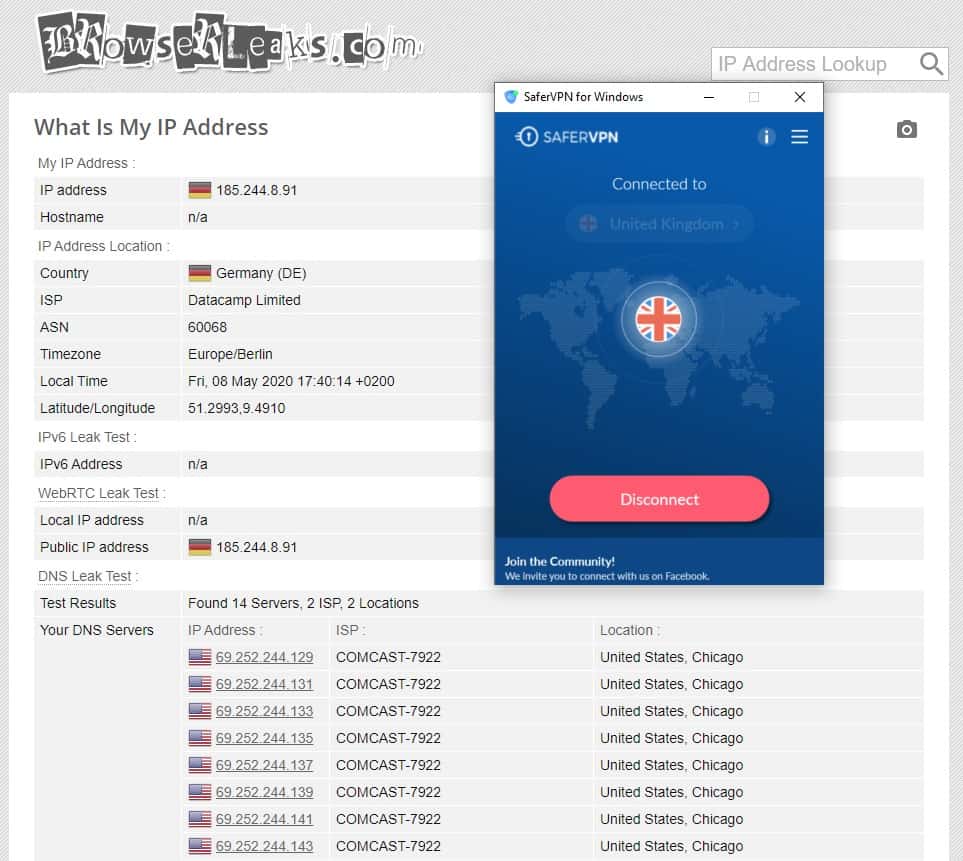 In some cases, the Windows app connected to the wrong country. In one instance, I connected to a UK VPN server, but received a German IP address. In another, it said I was connected to the UK but the VPN was not actually connected at all. These bugs pose a serious risk to users who might think their privacy is being protected. 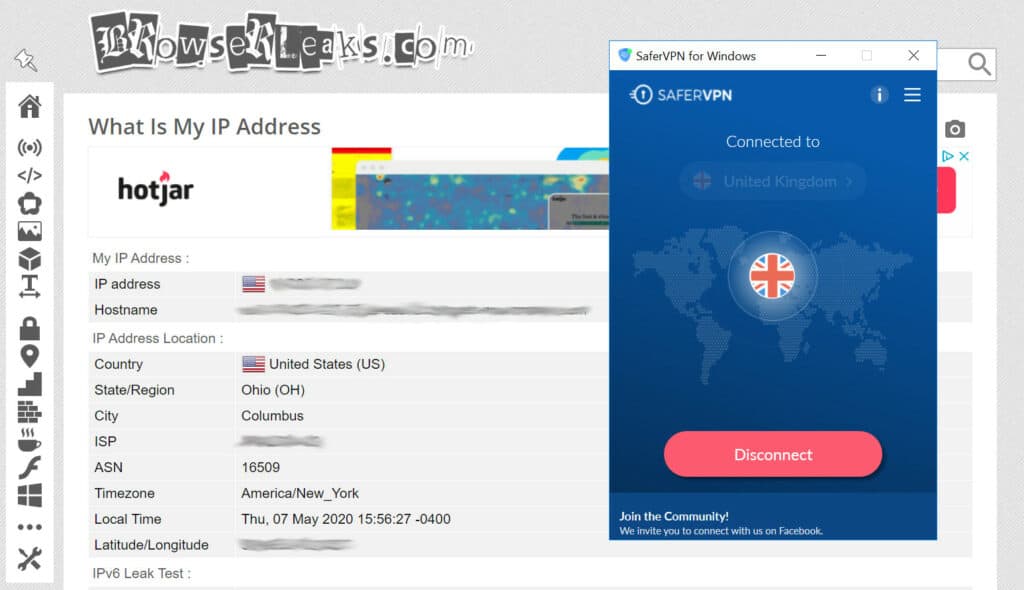 The Chrome extension asks for permission to “read and change all your data on the websites you visit,” which raises eyebrows. But the extension’s privacy policy says, “Unlike other VPN for Chrome, Chrome Proxy, unblocker VPN proxy service and Free VPN Proxy services, there are no ads, no logs and we’ll never sell your data to third parties.” 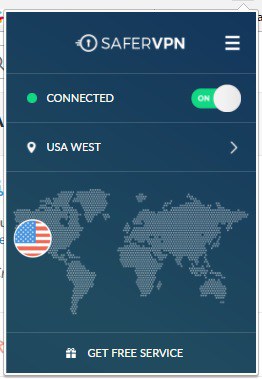 One of the more uncommon features built into the apps is automatic wifi security. With this enabled, any time you connect to an unsecured wifi network, the SaferVPN app will automatically detect that the network is not secure and connect to the VPN. It’s a handy bonus, especially if you’re forgetful or lazy about opening up and connecting through the VPN app each time you connect to the wifi at a Starbucks or the airport. Note that you need to have the app running on desktop, at least in the system tray, for this to work.

Does SaferVPN work in China?

No, SaferVPN’s apps will not work in China. You cannot unblock Facebook, Google, Youtube, Gmail, Instagram, Tinder, or any of the other apps and websites that are normally censored in mainland China.

SaferVPN should work in other countries with less strict censorship regimes, although we are not able to test them ourselves.

Is SaferVPN’s customer service any good? 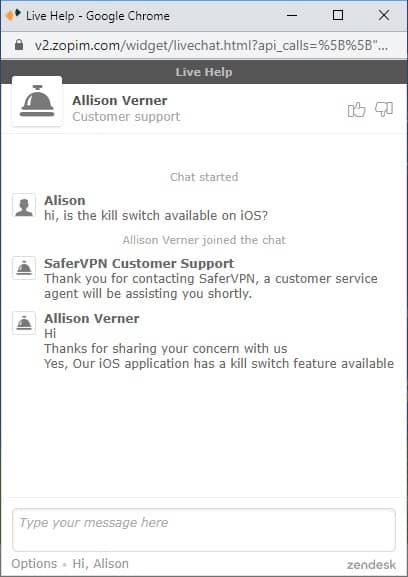 I used the Zendesk live chat on SaferVPN’s website to ask several questions about the service during the test period. In some cases, reps asked for my account email address, and other times it did not. Either way, support replied almost instantly with helpful answers, although some were clearly copy/pasted from a response book. It could be that they use chat bots in certain instances, but we’re not certain. Either way, responses came fast on every query we put forth.

I can also open a ticket if I want a more private option than Zendesk.

A searchable knowledge base is also available on the website, but it’s not as thorough as we’ve seen from rival competitors.

SaferVPN offers a single tier of service with steep discounts if you sign up for longer terms:

All plans come with a 30-day money-back guarantee.

SaferVPN accepts credit cards, PayPal, and two cryptocurrencies: Bitcoin and Tron. The guarantee is not available if you pay with crypto, though.

Do I recommend SaferVPN?

On the plus side, SaferVPN is novice friendly and offers good discounts for longer terms.

But those advantages are undermined by slow speeds, inability to unblock most region-locked content, and severe security bugs. It’s also useless for users in China to bypass censorship. Those glaring issues make it difficult for me to recommend SaferVPN over the competition.

If you’re on the move often and want automatic wi-fi protection, then it could be good for basic web browsing, accessing social media, and streaming Netflix.

SaferVPN didn’t impress me. But here are a few other VPNs worth taking a look at:

ExpressVPN is a premium option with fast servers, the ability to unblock almost anything, and servers in 94 countries. Support is available around the clock, it works in China, and it makes apps for a wide range of devices.

NordVPN is a solid budget option and earned the top spot in my latest round of speed tests thanks largely to its new NordLynx protocol. It’s good at unblocking streaming services and works in China.

Here’s a breakdown of how SaferVPN compares to two of the most popular services, ExpressVPN and NordVPN.