Norton, a brand operated by Symantec Corporation, is not offering a standalone antivirus program this year but its all-in-one security program comes in at a similar price point.
Looking like it may be a bit of a jack-of-all-trades solution, let’s find out whether it is master of none or all.

Norton lists the following as the minimum system requirements for running the program:

The process forces you to sign up for a Norton account during installation which is a minor inconvenience but that didn’t stop me from getting up and running in a matter of five minutes or so.

Annoyingly, the program then required a reboot but as I’m utilising a SSD that wasn’t a major issue. 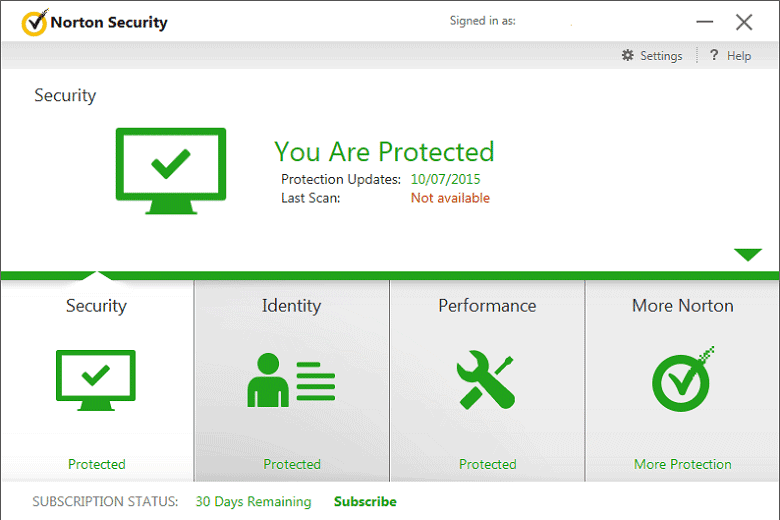 Norton Security 2016 comes with a clear and concise interface that features a predominantly white background overlaid with grey accents and a touch of green to pull attention to the really important stuff such as computer status (yellow means an update should be installed; red tells you there is a serious threat to deal with) and time remaining on your subscription.

Toward the bottom of the interface are four rectangular icons which grant access to the key parts of Norton Security: Security, Identity, Perfomance and More.

Clicking on any of these slides new options into view with some nice animation work.

Also available from the main screen you will find links to Settings and Help as well as a subscription link should you need to renew your protection. 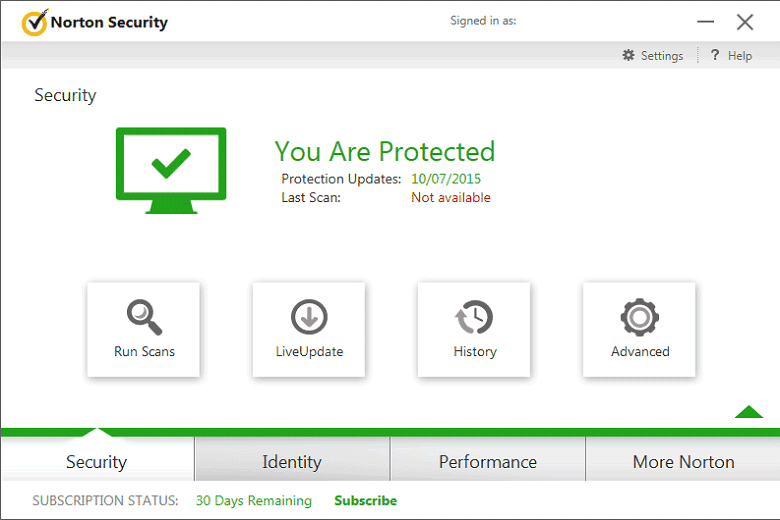 Like the majority of antivirus programs today, Norton Security 2016 detects malware by comparing suspicious files to a cloud-based database containing all the currently known malware definitions at its disposal or by analysing suspicious behaviour.

In its default state, the program will scan your system for malware once per week which ensures that anyone using has at least some level of security to fall back on. Those of you who feel more frequent scans are in order can order one up at will or schedule them for a convenient time, though you will have to rummage around a bit in either the Security settings or main Settings to find the latter option.

In other words, this program acts like a regular antivirus program and offers everything you would expect from the same.

But it also has more features… 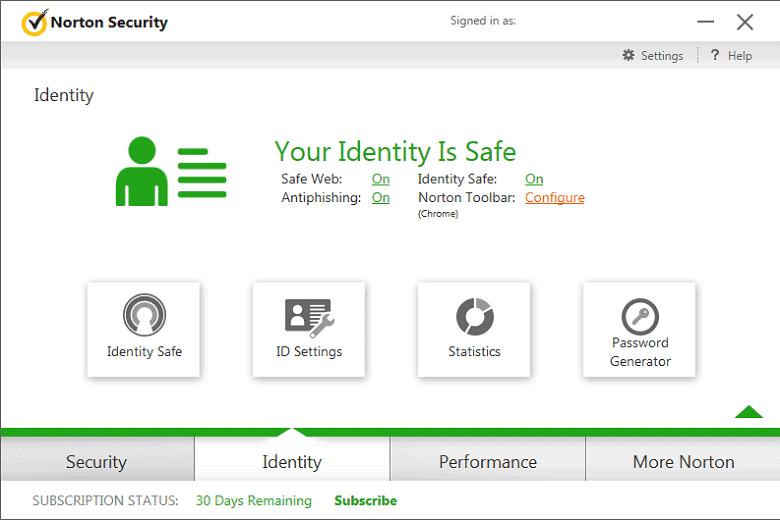 Given the nature of this product you may be expecting a whole raft of extra features and that’s OK, because Norton does not disappoint on that front. For the most part.

In addition to being able to scan your computer in a number of different ways, the software can also check your Facebook Wall for malicious links or scan your hard drive for pervasive browser hijackers and ad-ware that some antivirus programs tend to ignore.

Another scanning method – Norton Insight – identifies files it deems trustworthy and then omits them from future quick scans which speeds that process up noticeably.

Under the Identity heading, the program offers tools that can store your most sensitive of information – bank logins, etc. – in the cloud in an encrypted state. Here, you will also find anti-phishing protection, website safety features and a very useful password manager. 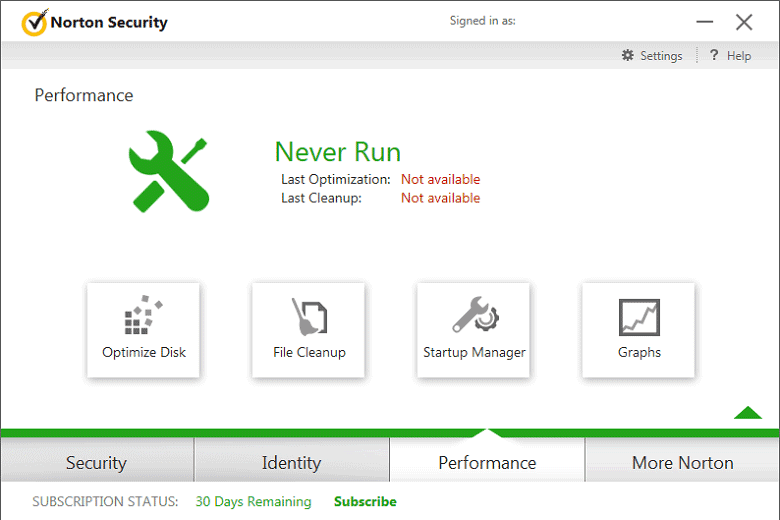 Diagnostic tools can scan your computer and make recommendations for how you can speed it up. It’s not something I’d use myself (there are other ways of doing this) but for a non-technical person it could be a handy little tool.

Other performance tools mirror features found in Windows or easily found via free optimisation tools such as CCleaner. I personally don’t find disk and file cleaners or startup managers particularly useful but they are there, in one place, and easy to use if you do like them. 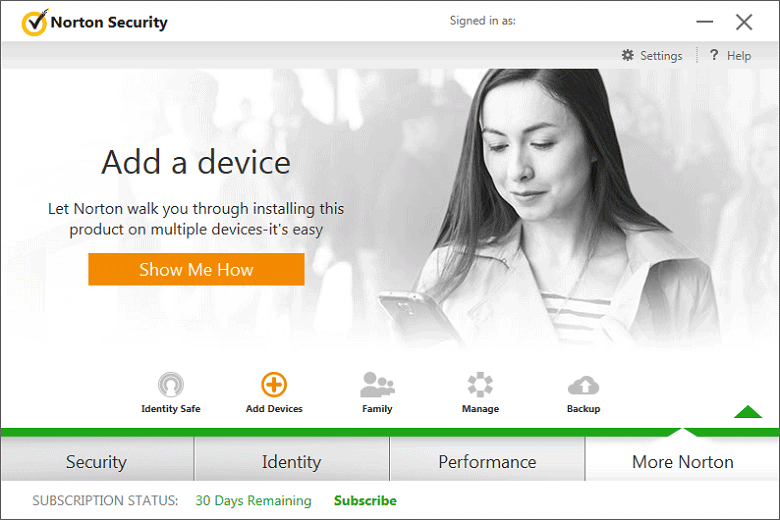 Of more interest are features such as Add Devices and Manage which handle all the devices you are protecting under your license, including other PCs, Macs and any iOS or Android devices you happen to own.

Backup, which sounds like it could be useful (essential more like), is a bit disappointing – instead of leading to some sort of included backup utility it instead prompts you to spend extra money on Norton Security with Backup – frustrating!

Another feature, History, is useful though – not only does it detail the security actions that have transpired on your machine, it also displays login and Wi-Fi data which some of you may well have a use for.

Lastly, the other tool of note is Norton Family, the company’s parental control feature. It sounds great – it can monitor your kids browsing activity, search history and Facebook activity all through a web browser or via a smartphone. Added to that, it can track the location of your kids devices which could be extremely useful, limit the amount of time they can use the internet and much more besides. The only snag: it costs more money (around $50 / £30 at the time of writing)

Given that this software isn’t cheap, and that its name implies it is something more than a standalone antivirus program, that’s a hard pill to swallow, despite the value and peace of mind it undoubtedly adds to those of you who have children to protect.

Despite packing an interesting number and array of extra features, the most important consideration for Norton Security 2015 is its ability to detect and neutralise threats to your computer.

How does it fare in that department?

Well, according to AV-Test, it performed admirably, scoring a detection rate of 100% when presented with common malware sample. That compares with an industry average of 98%.

When stacked against zero-days (newly discovered malware that security vendors may not yet have added to their databases) it also scored a detection rate of 100% versus an industry average of 94%.

In a recent report from another independent testing lab – AV-Test Institute – the program also achieved a perfect score, placing it on a par with the likes of Kaspersky and Bitdefender as a leader in the industry (read our Bitdefender antivirus plus 2018 review here).

Running on a low-powered core i3 NUC with 8 gigabytes of RAM, CPU usage was moderate rather than the expected high while running a scan. Combined with average memory usage, I found my machine to be fully responsive during both short and full scans to the point where I would not have been aware I was running them if I hadn’t initiated them myself.

Given some of the resource hogs I’ve used over the years, and the occasional slight lag noticed in some modern antivirus programs, I’d say Norton Security 2015 was ultra smooth in comparison.

Symantec offers an impressive list of support channels for its security programs including email, internet chat and telephone, all of which are available 24 hours per day, 7 days a week, which could be extremely useful to some people.

Additionally, the company backs up that support by making a promise: if you have Norton Security 2016 correctly installed and configured and still get an infection on your PC that it cannot remove, Symantec will refund the purchase price of the product. Nice one! 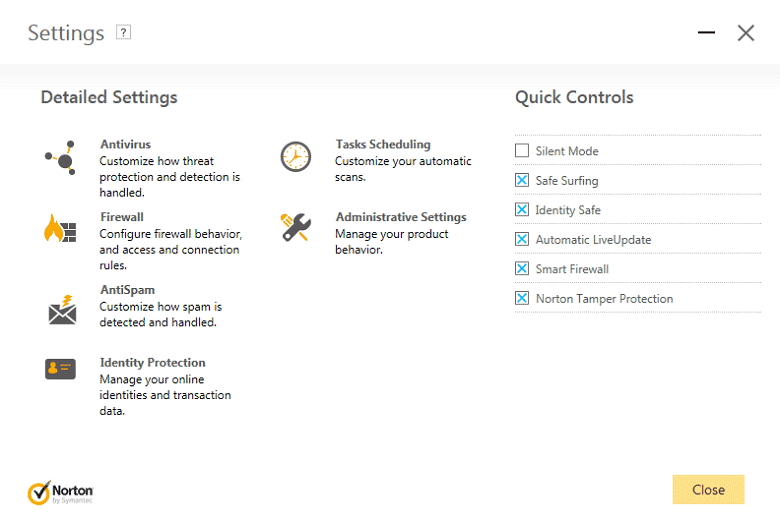 For an all-in-one security package priced at the higher end of standalone antivirus programs (you’ll need to shop around to get that price), Norton Security 2016 makes a compelling case for your money.

Many of its extra features are useful, including cross-platform support for Macs and Android devices and an ability to share the license between three machines, unlike some alternatives that allow only one installation.

The interface looks good and is easy to navigate, a password manager is a great addition and support is top notch.

But for a program that appears to be marketing itself more as a security suite than an antivirus program there is one glaring omission or, if you prefer, up-selling opportunity: parental controls.

As a parent myself, that is the only feature that would really pull me away from choosing a simple antivirus program as my security solution, yet with Norton it is missing… unless you want to hand over a sizeable amount of coin to add it in.

Other than that, I like this program. If the included features match what you are looking for and you have a few machines to protect then I highly recommend it.

On the other hand, if you only have one PC, or need family protection,  cheaper antivirus programs or other internet security software may be better choices respectively.

Rated: #1 out of 16 Antivirus providers