If you’re looking to get into ethical hacking, getting acquainted with Python is a great start. We discuss Python and ethical hacking and reveal the best online courses you can take to start training in the field.
Aimee O'Driscoll VPN AND CYBERSECURITY EXPERT 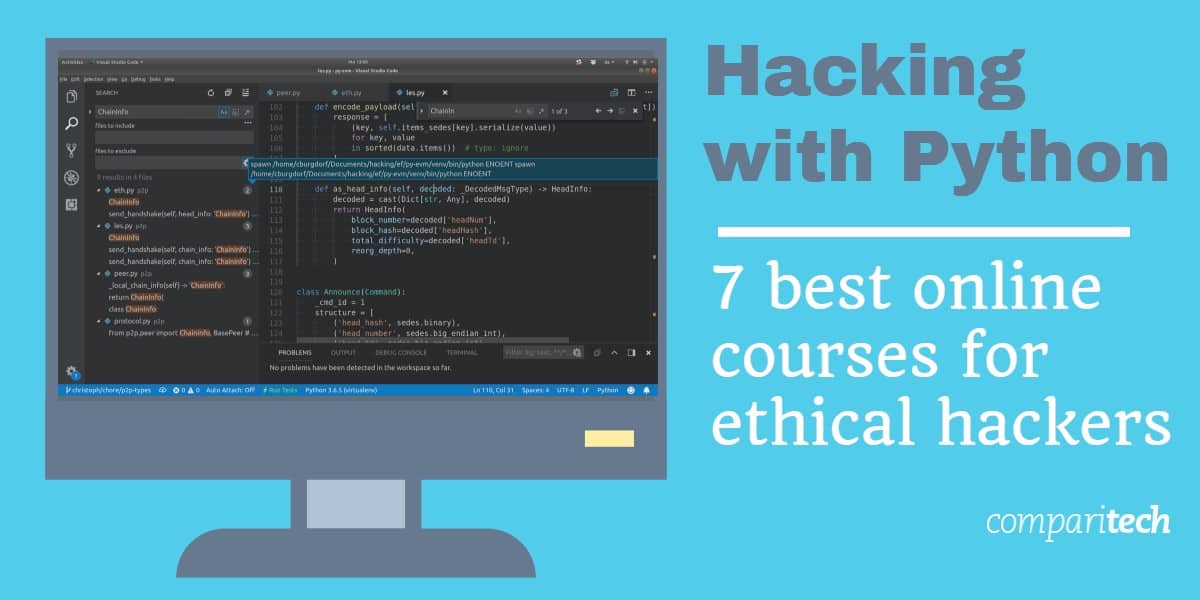 Ethical hackers play an important role in organizations by finding and fixing vulnerabilities in systems and applications. Python is a high-level programming language that’s ideal for security professionals as it’s easy to learn and lets you create functional programs with a limited amount of code.

There’s a decent selection of courses available to help you learn about ethical hacking with Python. However, not all are made the same. They vary greatly when it comes to program depth, suitability for various levels, accessibility, and price. We’ll go into more detail, but here’s a list of the best online Python ethical hacking courses:

Our selections for the best courses for hacking with Python were based on the following criteria:

Here’s our list of the best hacking with Python online courses for ethical hackers:

1. StationX: The Complete Python for Hacking and Cyber Security Bundle

Courses strike the perfect balance between the theoretical and practical components of hacking with Python. What’s more, they stick to the point, so you don’t get bogged down in unnecessary details that could be overwhelming, especially for beginners.

You’ll learn by example, writing your own hacking and security programs, modeling problems, and designing and implementing the corresponding solutions.

The courses included in the bundle are:

If you’re looking to start a career in cybersecurity or simply want to learn more about hacking with Python, this bundle could be a great fit. What’s more, StationX has a ton of other great courses and bundles available. You can even take advantage of its VIP Membership and get access to all courses for a low annual fee.

If you’re a high-level learner who just wants to learn the bare minimum, this one might be for you. Instructor Joe Perry keeps things simple in this course that’s geared toward non-coders. In it, you’ll learn the “must-know” aspects of Python rather than delving into its specifics.

Intro to Python contains around 10 hours of material covering basic concepts up to advanced scripts. Designed to prepare people who are considering a career in penetration testing and cybersecurity, it focuses on teaching the commands and functions most critical to the industry.

Once you’re finished, if you’re looking to expand your knowledge, Cybrary has plenty more courses to choose from, many of which are free. You’ll have to create an account to access any of the courses, and once you’re enrolled, you’ll be offered the Insider Pro package. This costs  $99 per month (or $83 per month when billed annually) and gives you access to more courses, a career pathway guide, and a mentor. It comes with a seven-day free trial.

Another popular offering on Cybrary is Developing Ethical Hacking Tools with Python. This course includes just over an hour’s worth of videos so is quick to complete, but packed with useful information. For example, it teaches you how to combine multiple Python libraries and automate information gathering. You’ll even learn how to code a keylogger and write a ZIP password bruteforcer.

Here are the modules included in this course:

This is considered an intermediate level course so some background knowledge in Python is needed. It might be a good idea to take the Intro to Python course followed by this one.

You’ll also have access to ethical hacking tutorials such as “Buffer overflow and exploit writing with Python” and “Syn Flood attack with Scapy.” The curriculum includes 23 lessons ranging from three to 36 minutes in length. Here are a few lesson examples:

The course is suitable for complete beginners, but it does become fairly complex and could teach experienced programmers a thing or two. Each lesson includes an exam, enabling you to identify gaps in your knowledge.

CyberTraining 365 offers a free five-day trial, so if you’re quick, you might be able to take this course for free. Once your trial is up, you’ll pay $9 for the first month and $59 per month after that. You can get discounts if you sign up for a six-month or annual term. If you’re only interested in this course, it’s also available on Udemy for $19.99.

Udemy’s popular Python 3 For Offensive PenTest course is for more advanced users. It covers in-depth topics related to ethical hacking and penetration testing but includes some real-world examples to help you see things from a practical perspective.

The cost of this course is $99.99. The total length of all videos is around five hours; this includes 58 lectures split into seven modules:

One notable thing about this course is it’s regularly updated so you can be assured lessons deal with the most current information and program versions. What’s more, the course instructor, Hussam Khrais, is prompt in responses to student queries and will even make updates to the course upon request. Udemy courses come with a certificate of completion.

As mentioned, this isn’t considered a beginner’s program and prerequisites include beginner-level Python (or another scripting language) and intermediate-level knowledge of ethical hacking and penetration testing.

This is another (somewhat pricier) course offered by Udemy, targeted at beginners. The course is new to the platform but is already proving a hit, having attracted thousands of students and racking up some great reviews. It takes things slowly and explains everything you need to know about setting up your environment and getting started with Python 3.

You’ll also learn about the basics of networking, including internet architecture and Python TCP connections. Practical lessons include setting up more than 15 Python 3 code application tools and networking applications, creating a man-in-the-middle Python 3 tool, and building a data scraping tool.

The course consists of 26 lectures (about six hours of videos) split into four modules:

It’s fairly pricey at $199.99 but Udemy does offer regular discounts so watch out for those.

Udemy offers many other cybersecurity-related courses, including more on the topic of hacking with Python. Here are a couple of others you may want to check out:

This free offering from MindsMapped is a two-part program. The course instructor is the founder of HackerSploit, a cybersecurity consultancy firm.

The two main modules are titled:

The first caters to beginners and starts with an introduction to Python, progressing to the creation of a brute force password checker. The second part of the course moves on to more advanced topics including creating TCP servers and understanding sockets.

The whole program can be completed in around three hours. After that, if you’re eager for more, Mindsmapped offers several other ethical hacking courses including:

Why get into ethical hacking?

The term “hacking” often brings to mind criminals sitting behind a computer hiding their identity and wreaking digital havoc. However, not all hackers are malicious (black hat) hackers. Ethical (white hat) hackers play an extremely important role in cybersecurity. They find and fix security flaws before malicious parties have a chance to exploit them.

With cybercrime becoming an increasingly prominent issue, it follows that the cybersecurity industry is growing. As such, there is a high demand for ethical hackers with the know-how and savvy to beat criminals to the punch. Some of the responsibilities of ethical hackers entail:

An ethical hacking career starts with a solid understanding of how to code followed by training in the specific areas you want to go into. You may wish to pursue a recognized accreditation in the field, for example, the Certified Ethical Hacker (CEH) certification.

Why use Python for ethical hacking?

Python is the programming language of choice for scores of ethical hackers. Indeed, a good handle of Python is considered essential for advancement in a cybersecurity career. One of the main draws is that you get a powerful language in a very easy-to-use package.

Python is flexible and functional while being intuitive and easily readable. It’s ideal for scripting small programs, which is a huge part of the role of ethical hackers. Plus, when you start using Python, you join a huge community of dedicated fans. This means that should you need any tips or advice or run into some issues, there are plenty of resources — including documentation and forums — to turn to.

Aside from cybersecurity, Python can be an invaluable language as part of a knowledge foundation in other careers too. Those interested in web development and testing, big data, game development, artificial intelligence, or smart device development can all benefit from a knowledge of Python.