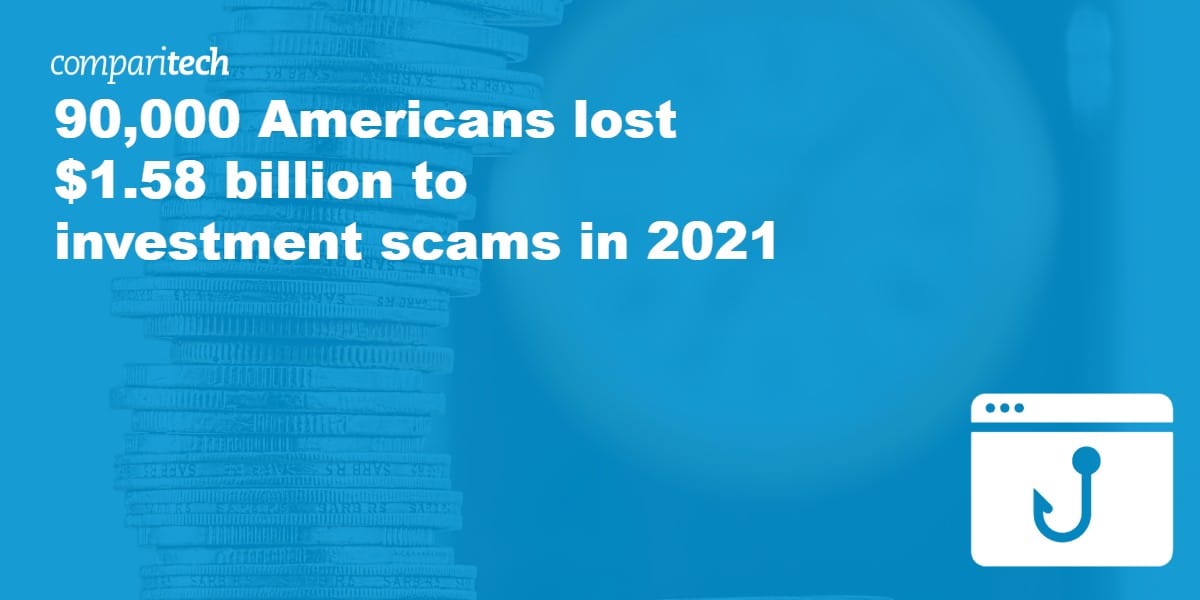 Investing money online is now quicker and easier than ever before. You’re often just a click away from investing your hard-earned cash into something that promises great financial returns.

All types of investments carry some risk– it’s not just the stock market you need to keep an eye on, but also who and what you’re investing in.

There are a number of clever, well-thought-out investment scams that aim to catch out people who try to “get rich quick.” From Ponzi schemes to advance fee scams, investment scams are often cleverly disguised amid a whole host of other legitimate offerings.

Here at Comparitech, our estimates suggest that just under 90,000 Americans were subject to investment fraud in 2021 with losses totaling almost $1.6 billion.

The Federal Trade Commission (FTC) describes social media as a “gold mine for scammers” with 54 percent of investment fraud losses originating on these channels. The top platforms identified in these reports were Instagram (36%), Facebook (28%), WhatsApp (9%), and Telegram (7%). In 64 percent of these cases, cryptocurrency was the method of payment with the FTC also noting a “huge surge” in bogus cryptocurrency investments (something we’ll explore in more detail below).

To get a clearer picture of the extent of investment scams on a state-by-state basis, Comparitech analyzed data from the Internet Crime Complaint Center (IC3), Federal Trade Commission (FTC), Better Business Bureau (BBB), and the Financial Crimes Enforcement Network’s (FinCEN’s) Suspicious Activity Reports (SARs) from 2019, 2020, and 2021.

States with the highest rates of investment scams per 100,000 people

As the above map also shows Nebraska is the only central state with high figures. The remaining high numbers come from Northeastern states.

States with the highest number of investment scams and losses

The top five states for the highest number of investment scams and losses are:

States with the highest and lowest average loss per investment scam

In contrast, the states with the lowest averages per investment scam were:

According to our findings, investment scam cases nearly doubled last year while losses were almost three times the amount lost in 2020. 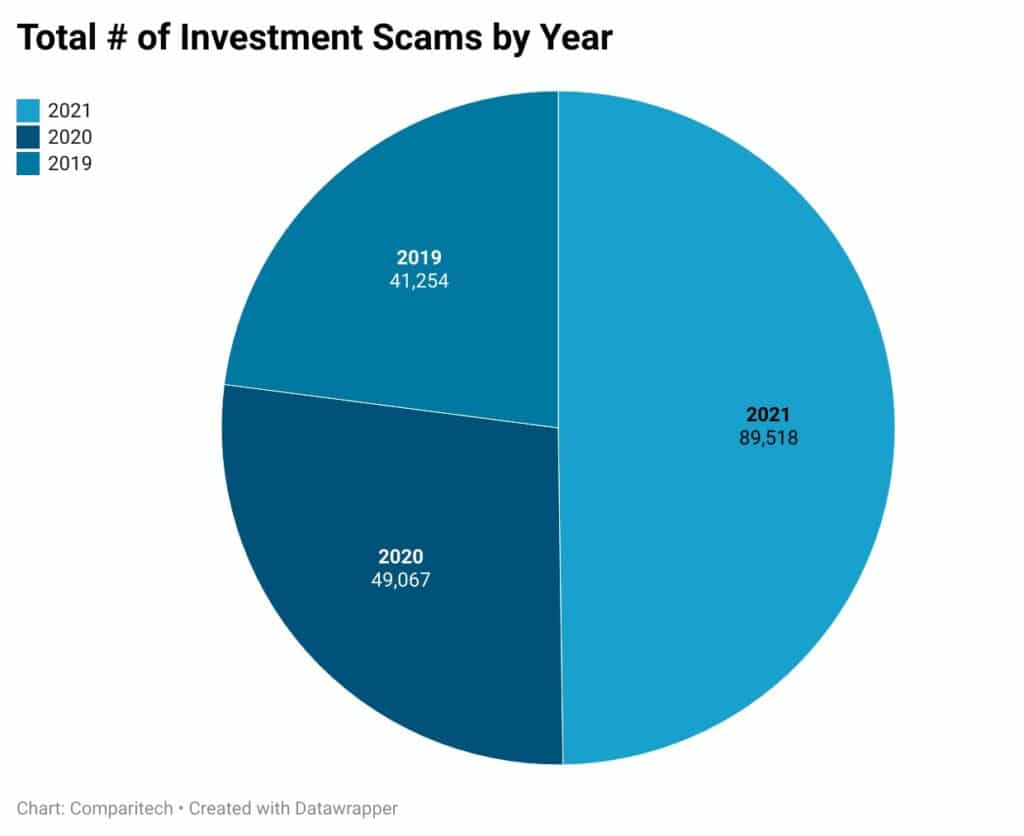 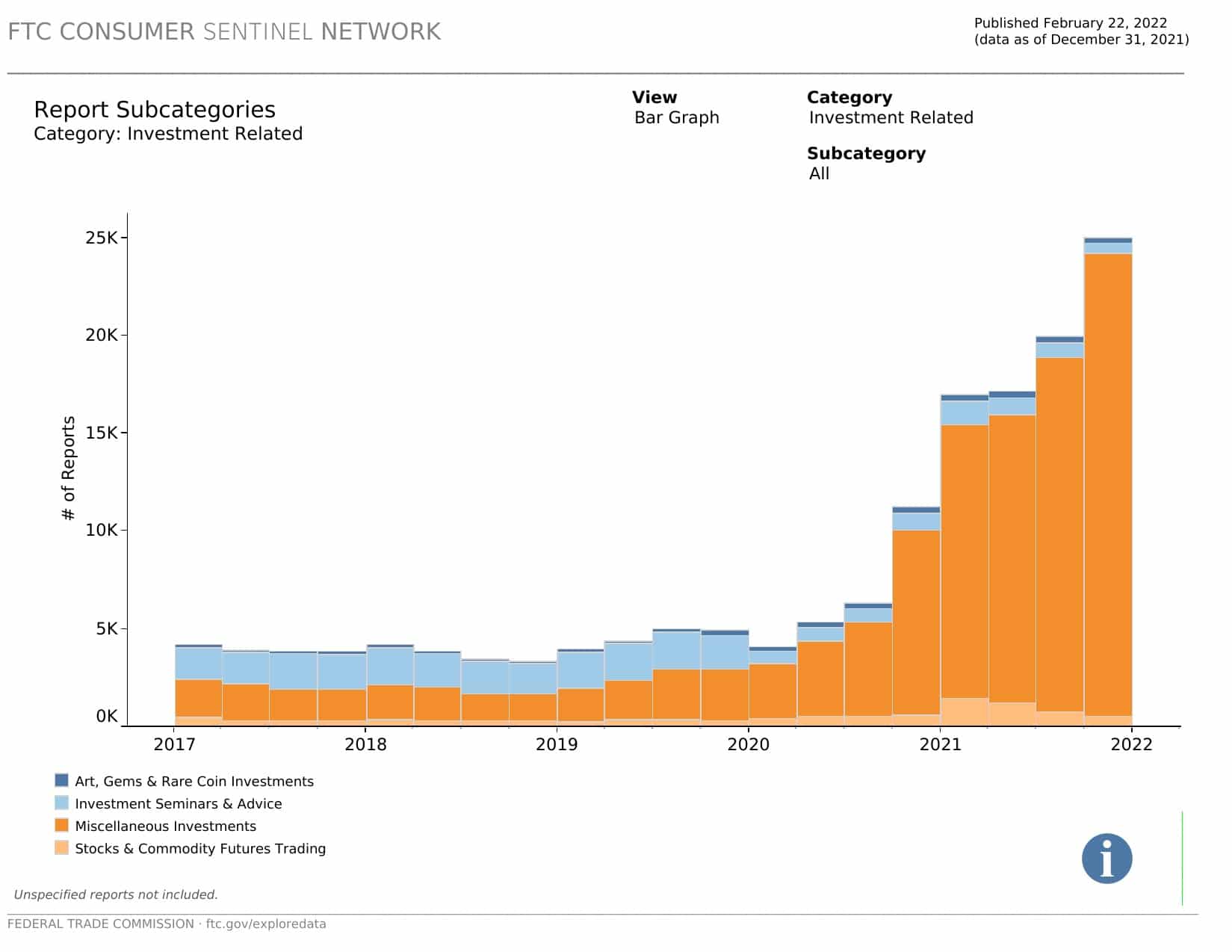 Please note: The total investment scam figures reported by the FTC and IC3 are always higher than the total of our individual state figures. This is due to some reports not being assigned to a specific state due to a lack of location data.

Interestingly, as we’ve already noted, the FTC saw a huge surge in investment scams involving cryptocurrency. According to its report, bogus investment opportunities involving crypto skyrocketed from October 2020 (to March 2021), with almost 7,000 reports of these scams and a total loss of over $80m. This represented a 1,000 percent increase in losses from the same period the year before.

The reported median loss to these scams was $1,900, which, while lower than the average investment loss in 2021 ($3,000), was higher than 2020’s average investment scam loss ($1,550). Over the course of 2021, the losses to cryptocurrency investment scams could have increased even further. This is demonstrated in the Q4 2021 statistics available through the FTC (for all fraud types) whereby $294.1m was lost in 13,383 fraud cases involving crypto, creating an average loss of $21,976. 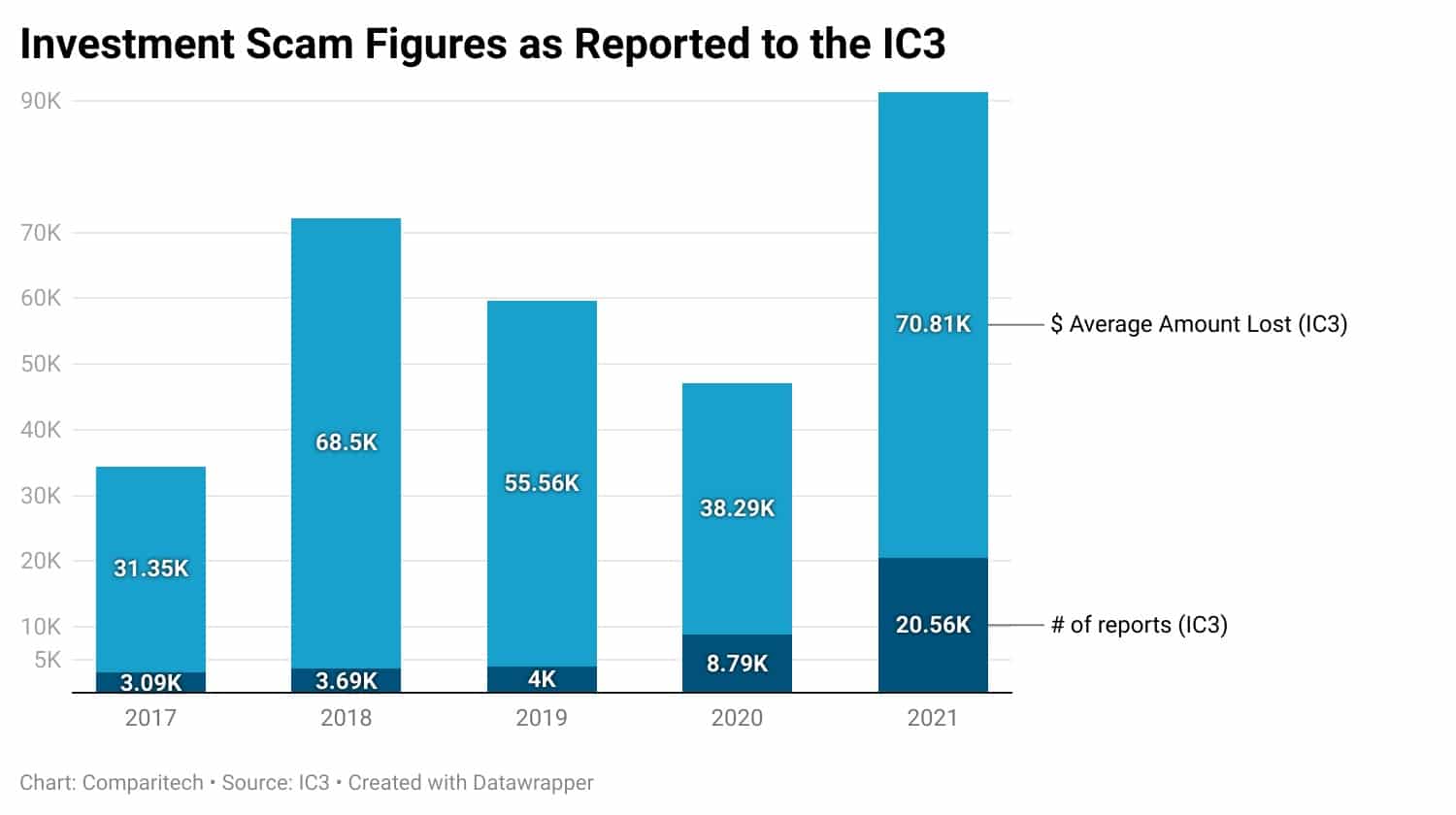 All four reporting avenues show a similar picture when it comes to investment-related fraud increasing each year. 2021 has been a record-breaking year, with the possibility of even more investment scams to come in the next few years.

The only data available for 2022 so far is in FinCEN’s Q1 SARs report. From January to March 2022, 4,312 investment-related SARs were filed. While this is slightly less compared to 4,917 reports in Q1 2021, this doesn’t necessarily suggest a decreased trend for 2022. As we can see from the FTC chart above, investment scams tend to see the greatest increases toward the end of the year.

The true cost of investment scams in 2021 could have been over $2.5 billion

While the figures mentioned above make for a shocking read of just how destructive investment scams have been, it’s possible they could be even higher with many scams going unreported.

A report conducted by the FTC found that only 62 percent of cases are reported when it comes to investment-related fraud. Based on the reported figure of 89,518 people being the victim of an investment scam and this only representing around 6 in every 10 cases, this would imply that nearly 144,900 people may have been subject to investment scams in 2021. And based on the total reported losses (of known cases) being $1.58bn, that would equate to total losses of around $2.54 billion.

What are some popular investment scams and what are the key warning signs to look out for?

The Suspicious Security Report (or SARs reported to the Financial Crimes Enforcement Network–FinCEN) highlights specific types of investment fraud. It found the most popular scheme (excluding a category labeled ‘other’) in 2021 to be advanced fee scams, which accounted for 4,706 reports. Other categories include market manipulation (4,127 reports), and insider trading (3,417 reports).

Below is a list of definitions for some well-known investment scams to be aware of:

If you are planning to invest your money online, and want to do so safely, be wary of who you’re handing your money over to, and look out for these key warning signs that might suggest a scam:

If any of these have happened to you during your time spent investing money, you can protect yourself by:

IC3 Data: Data categorized as “Investment” scams.” Reports are reviewed and researched before being passed on to federal, state, local, or international law enforcement or regulatory agencies.

FTC Data: The FTC doesn’t provide a full breakdown of state-by-state figures for investment scams and instead lists the top 15 states with the highest-ranked reports per million of the population. We made estimates for the other states by finding the average number of cases by the population total for each state.

For example, in Alabama, the population is 5,024,279 and the average number of cases for each state’s population came out to be 0.00014, which made the estimated number of investment fraud cases for Alabama 703.

The FTC reported a median loss of $3,000 which was then multiplied by the case numbers to get an estimated total $ amount lost. For Alabama, the estimated loss is $2,110,197. This was then applied to every state where data wasn’t provided.