What are macro viruses?

There are plently of viruses that target devices, but macro viruses target applications - typically Word and Excel. In this post we look at how macro viruses work and what you can do to avoid them.
Marc Dahan Specialist in online privacy 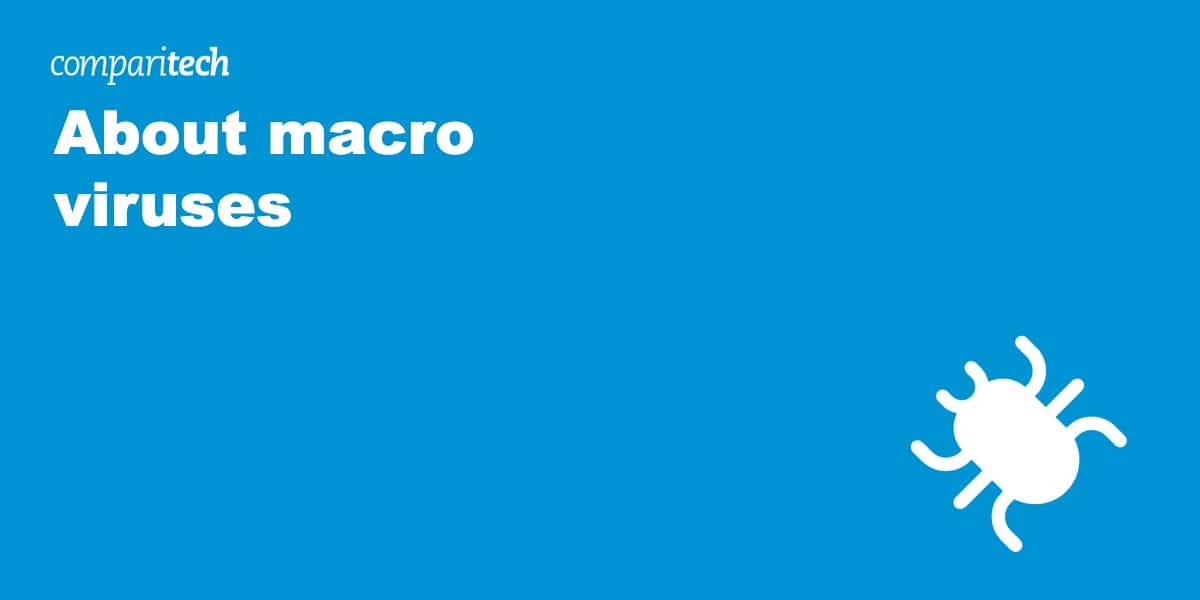 This post looks at how macro viruses work and provides real-world examples. We’ll then go over what you can do to avoid macro viruses and how to remove them.

Macro viruses typically spread by being embedded in documents and spreadsheets (typically Excel spreadsheets and Word documents). Macro viruses are written in a macro language, which is supported by the applications they infect. A macro language is a simple programming language that enables a user to write and execute automated tasks in sequence. That is called a macro.

Usually, a macro is written to make the user’s life easier by executing (usually) redundant tasks quickly, such as inserting a particular table into all the documents created from a specific template and connecting to a database to validate the table’s values. And it just takes a few key presses to trigger the macro. But a malicious macro won’t make your life easier – quite the opposite. A malicious macro could perform any action that’s supported by the macro language in which it was written. That means things like creating new files, moving text, sending files, inserting pictures or videos, or more destructive things like formatting the hard drive or corrupting your data. A malicious macro could even contact a remote server and trigger the download and installation of malware.

Because macro viruses are embedded within documents and spreadsheets, their attacks typically depend on social engineering. Malicious actors send emails or text messages to prospective victims, including the infected document or spreadsheet as attachments or a URL linking to the infected file. If the user opens the file, they’re dangerously close to a macro virus infection.

I say “dangerously close” because now, Microsoft Word and Excel have macros disabled by default. That wasn’t always the case. Microsoft chose to disable macros by default in reaction to the proliferation of macro viruses. So now, if a user happens to open an infected file, they will see a prompt asking them if they want to enable macros. Clicking yes triggers the macro, and the fun begins…

Macro viruses tend to spread easily because we’re so used to opening remote documents and most users expect macros to be present in spreadsheets – at least within a work setting. And suppose an infected file makes it onto a shared network drive within your organization’s network. In that case, the amount of damage the micro virus embedded in the shared document could be massive.

Also, macro viruses can be configured to run both automatically and silently, making it difficult even to realize you’ve been infected. And, as mentioned above, macro viruses are OS-agnostic, meaning they can infect any operating system that can host vulnerable applications. That’s pretty nasty.

The Concept virus is probably the most “famous” macro virus. It first emerged in 1995 and was specifically designed to infect Microsoft Word documents. This was also the first time we observed a virus in the wild spreading by attaching itself to a document rather than an application.

The Concept virus had the potential to cause massive damage, as it would infect any document saved using Windows’ ‘Save As’ functionality. The Concept virus also managed to infect the document templates that ship with the applications, infecting any new document created in the application. Luckily, the virus didn’t actually do much, and many believe it to have been more of a ‘proof-of-concept’ than anything else – giving credence to the idea it originated from a Microsoft employee, as well as a reason for its name. Still, it was very difficult to get rid of it once infected.

Four years after the Concept virus, in 1999, the world was introduced to the Melissa macro virus. Like the Concept virus, the Melissa virus could infect the document templates, infecting all subsequent documents created in the application. But beyond that, the Melissa virus was programmed to automatically send the opened, infected document to the first 50 contacts of the unsuspecting victim’s email address book. Needless to say, this virus spread faster than wildfire.

In 2007, another Microsoft Word macro virus was discovered. W97M/Marker would infect Word templates and documents and disable macro content warnings and virus protection in Microsoft Word. Once installed, the virus would be triggered every time an infected Word document was closed. Infected files would contain the string “<- this is a marker!”, which served as an infection marker for the virus and is also what gave it its name. This macro virus has multiple versions, but all of the different versions work in the same basic way.

In 2017, security experts discovered the first macOS macro virus. Though, thankfully, it was stopped before it could do significant damage. The macro was included in a Word document passed along to unsuspecting macOS users through phishing. Opening the compromised Word document would prompt the macro to contact a remote server and trigger the download and installation of malware. By the time the virus was discovered in the wild, the remote server had already been taken down, so security researchers were unable to determine what the exact malware was. However, we know that the macro’s code was derived from a spyware exploit kit, so there’s a good chance the goal of the attack was data theft.

The symptoms caused by a macro virus infection don’t really differ that much from the symptoms of other computer viruses. But there are some side effects that may signal a macro virus. This, hence, isn’t an exact science, but be wary of the following:

So lookout for the above. But pay particular attention to Microsoft Word or Excel prompting you to enable macros upon opening a file. While macros are disabled by default, you’ll be prompted to enable them if you open a file that contains any macros. Ask yourself whether or not the file you’re opening should contain macros. If it shouldn’t contain any, then, of course, don’t enable them.

How to remove macros viruses in Microsoft Windows

The proper defenses against macro viruses are different for organizations than for users. Though, of course, organizations should make sure their employees follow the security tips for individuals. These measures work in tandem.

Educate your organization about the risks of macro viruses

One of the best defenses against online threats is vigilance and mindfulness. Make sure you provide your workforce with adequate training on the different threats they may face and the relevant mitigation measures. That will reduce the odds of your organization falling victim to a macro virus attack.

Microsoft Office has some built-in controls that you can set via group policies to mitigate the use of malicious macros. Specifically, digital code signing is designed to block all macros not signed by a trusted entity. That should apply to the entire organization.

Use an Antimalware Scan Interface (AMSI)

Antivirus applications and other security solutions can use AMSI to scan macros and other scripts at runtime to check for validation. AMSI enables pretty much any security solution to have greater visibility into potentially malicious activity and can alert the IT department of any detected high-risk activity happening over the network. While this is a worthwhile step in securing your infrastructure from macro viruses, be aware that attackers are already leveraging publicly available AMSI bypass code to attempt to circumvent its use.

So that’s the lowdown on macro viruses. They’re somewhat of a unique flavor of virus, as they’re tied to a particular application rather than to a device. But given how ubiquitous the apps it infects are today, macro viruses have the potential to do serious damage. By following the above security tips, for both organizations and individuals, you and your organization can avoid them altogether – or, at the very least, know what to do if faced with a macro virus attack.

As always, stay safe (and virus-free).