Server-side request forgery (SSRF) attacks and how to prevent them

If your infrastructure is vulnerable to server-side request forgery attacks, the consequences could be devastating to your organization. We explain how SSRF attacks work and how you can avoid them.
Marc Dahan Specialist in online privacy 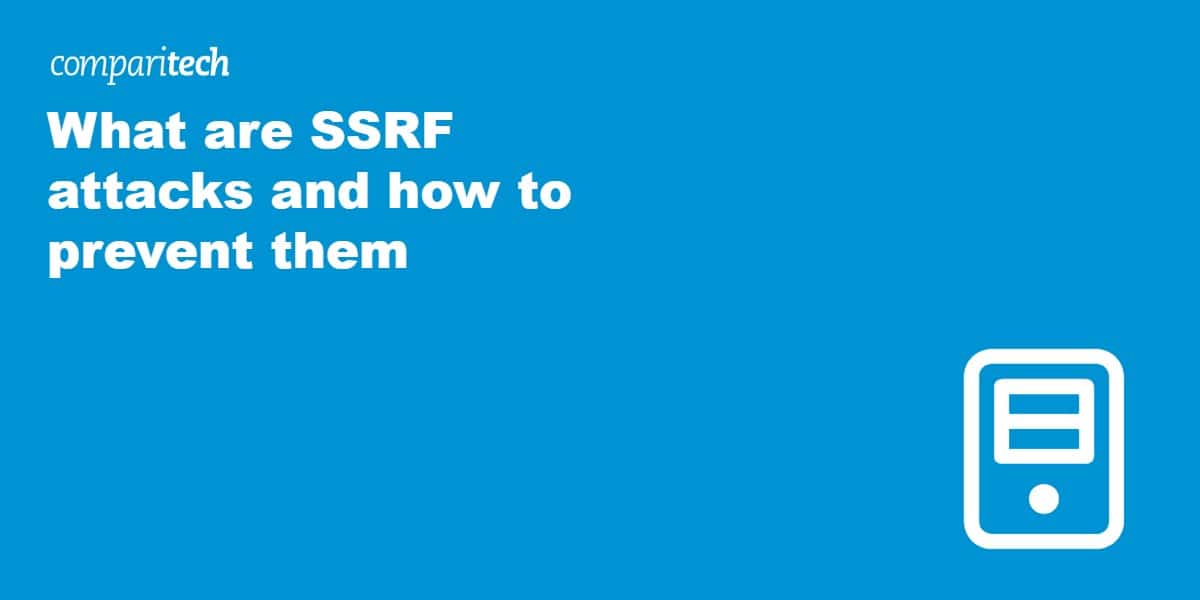 Server-side request forgery (SSRF) attacks exploit software vulnerabilities that could allow an attacker to trick the server-side application to allow access to the server or modify resources. The attack can be successful if the target application supports data import from URLs or reads data from the URLs without proper safeguards (more on that later).

The attacker manipulates the URLs to make HTTP requests to arbitrary domains of their choosing by tampering with URL path traversal or by replacing it altogether. SSRF attacks can exploit URLs linking to internal services within the organization’s infrastructure that should not be exposed to users or external systems that should not be accessible to users.

If successful, an SSRF attack can lead to unauthorized actions or unauthorized access to the organization’s sensitive data, such as login credentials, for example. These can affect the web application itself, the back-end systems it relies on, or external servers with which the application communicates.

While not necessarily the first exploit that comes to mind when thinking about online attacks, SSRF attacks are serious business. According to hackerone.com, in 2020, SSRF attacks ranked fourth (out of ten) in terms of the amount spent on bug bounties, coming in at just under $3 million. And its year-on-year growth is estimated at 103%.

There are different types of SSRF attacks. Let’s look at some of them in a bit more detail.

The key to an SSRF attack is to exploit the trust relationships the web application maintains with other parts of the organization’s infrastructure or with external services.

To pull off a server SSRF attack, an attacker attempts to exploit the process used by a web browser (or any other client app) to access a URL on the server. The attacker either modifies or replaces the original URL with a malicious URL they crafted themselves. The malicious URL typically uses the 127.0.0.1 IP address or the “localhost” hostname, which points to the server’s local file system. If the server accepts the request and routes it, the attacker has successfully penetrated the server’s filesystem, leading to all sorts of potential damage and data loss.

Here’s an example. Suppose we host a weather website. The way it would work is that the web application would query a trusted server for the current weather conditions of a given region and display them. This can be achieved by using a REST API, which passes a URL with an API request from a user’s browser to the server. The request could look something like this:

The attacker could change the above URL as follows:

The above would cause the server to grant the attacker access to the contents of the /admin folder. And because the request originated from within the server’s file system, it bypasses normal access controls and exposes the information despite the attacker being unauthorized.

As mentioned above, SSRF attacks can also target the server’s back-end component, with which it has a trusted relationship. That would be another machine located on the internal network from which the server fetches content. Suppose the server has full access rights once connected to the back-end. In that case, an attacker could modify the API call URL to gain access to sensitive information or perform any number of unauthorized actions. Back-end components typically have weaker security mechanisms in place because they’re considered protected by being located inside the network perimeter.

Building upon the above example, an attacker could replace the API call as follows:

The two above examples are examples of basic or non-blind SSRF attacks. What that means is that the attacker is getting feedback from the server in the form of visible data. In our first example, the attacker gains access to the /admin directory. In the second example, they access the /etc/passwd file.

Let’s take our second example above and adapt it to a blind SSRF attack. Instead of changing the API call URL to:

Let’s assume the attacker changed it to:

Depending on the server’s configuration, it may well repeatedly attempt to fetch this abnormally large file from the external server, which would eventually cause the web application to crash, resulting in a denial of service (DoS). This attack is considered “blind” because it’s not attempting to view any information but rather performing detrimental actions on the server’s behalf.

When successful, SSRF attacks enable an attacker to manipulate a web server into performing actions it shouldn’t perform or displaying information it shouldn’t display. Both of these outcomes can have serious consequences. Here’s a shortlist of some of the typical targets associated with SSRF attacks.

We’ve covered this already, but we’re still mentioning it because crafting a malicious URL to obtain sensitive data is probably the most common SSRF payload. Obtaining sensitive credentials can allow an attacker to wreak all sorts of havoc on the server. And the more permissions the credentials have, the bigger the risk. An attacker who manages to obtain the credentials of the server administrator, for example, could potentially take over the entire server.

As we’ve established, SSRF attacks don’t need to return any data to the attacker. However, specific metadata, such as response times to requests, can allow the attacker to determine whether or not a request was successful. If they can pinpoint a valid port and host pair, the attacker could port scan the application server’s network using this metadata in a Cross-Site Port Attack (XSPA).

The timeout for a network connection typically remains unchanged, regardless of the host or port. Because of that, an attacker could put through a request they know will fail and use this as a baseline for future response times. Successful requests will usually be much shorter than the baseline.

With that knowledge, attackers can fingerprint the services running over the network, allowing them to initiate a protocol smuggling attack.

A denial of service attack is an attack in which requests flood a server to the point that it can no longer cope with the load and crashes. There are many examples of these kinds of attacks in the wild – they’re pretty common. The SSRF version of a DoS attack would target the network’s internal servers.

We won’t dwell on this one too much, as it’s relatively obvious. But if an attacker gains access to your internal servers, through SSRF or otherwise, they can embed malware onto the servers and infect any machines that connect to the now compromised server.

Some modern web services are designed to be interfaced entirely via HTTP. Without proper safeguards over the control of URLs, an attacker may gain access to your servers by exploiting some of your running services. Gaining access to a server can mean, in certain circumstances, being able to execute arbitrary code (RCE), which could have any number of consequences – none of them good.

In 2019, CapitalOne fell victim to an SSRF attack. It remains one of the most well-known successful SSRF attacks today and it led to the leaking of over 100 million customer records. The attack was successful because of a mix of poor security practices and the presence of bugs within its infrastructure.

The CapitalOne site was hosted on Amazon’s AWS platform in which an SSRF vulnerability was present. The vulnerability allowed the attacker to obtain AWS credentials by using the application server itself, as AWS enables the application to obtain its own metadata. Once the attacker had secured the credentials, they could funnel the stolen data using AWS management tools, such as the command-line interface (CLI) and E3 storage.

A notable point about this attack is that the web application firewall (WAF) failed to identify and block the attack. We don’t know whether the attacker used a WAF bypass or if it was turned off. Couple that with the fact that the access credentials were too permissive, and you had the perfect conditions for a successful SSRF attack.

Here are a few things you should be doing to mitigate SSRF attacks effectively. As usual, this will not provide 100% protection, but it’ll skew the odds to something more in your favor.

Don’t trust user input – This is true for many different types of attacks. Do not allow user input without validating it first. Regardless of where it comes from: authenticated users, internal users, and public users treat it as untrusted input and perform input validation.

Perform allowlist checks – You should perform allowlist validation on IP addresses and DNS names to which your application requires access. That way, an attacker won’t be able to redirect requests to unauthorized locations.

Make sure only to provide users with the minimum necessary permissions to legitimately interact with the network.

Enable logging – Make sure your systems are configured to log any changes on the server. Also, make sure you’re able to track file change dates. That will help you detect any malicious code, infected files, and unauthorized access to your server.

Use proper threat/intrusion detection software – A threat detection application won’t necessarily save you from an SSRF attack attempt. However, such an application will alert you that something’s amiss much sooner than if you aren’t using one. The faster you get into damage control mode, the better off you and your organization will be.

Update your software – Always make sure to update your software as soon as the updates are available. Never use outdated or unsupported software. That will reduce the risk of your servers being compromised and make it more difficult for an attacker to exploit them.

Use a firewall – This one is quite simply unavoidable. Install a website application firewall (WAF) for your web server/site/application. It will help you prevent common automated attacks and may save you from more sophisticated attacks. Do not operate a web server without employing a firewall.

So that’s the lowdown on SSRF attacks. While they may not be the first attack you think of when hardening your servers, they’re nasty, to be sure – and they’re gaining momentum. Mitigating SSRF attacks is extremely important, especially given the rise in the use of APIs and webhooks. Hopefully, the above tips will help you secure your servers and safeguard your sensitive information and assets.