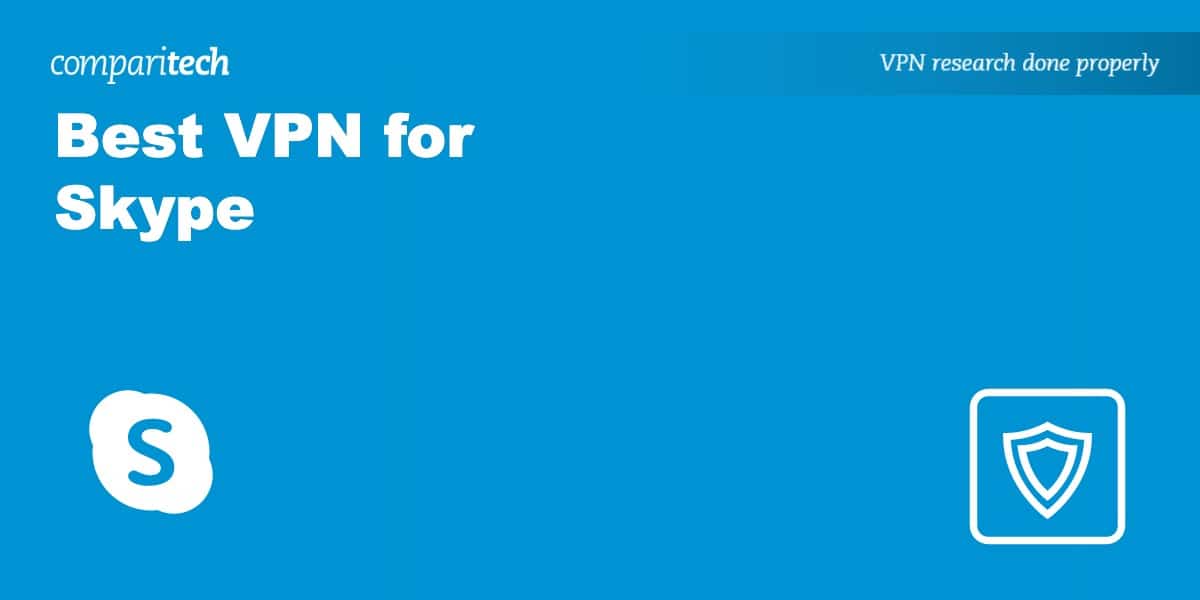 Skype has become the de facto voice-over-IP (VoIP) service worldwide for making voice and video calls over the internet. It allows anyone in the world to create an account and start making calls to other Skype users for free, and to mobile and landlines for just pennies a minute.

In many countries, however, using Skype is either prohibited or limited. ISPs block access to Skype either at the government’s request or for their own benefit. The reasons vary from country to country. In some places, like Belize, the big telecom operators don’t want competition from over-the-top (OTT) VoIP services like Skype. In others, like Egypt, the government won’t allow Skype to operate because they cannot monitor people’s communications. Finally, some countries make it prohibitively expensive and difficult for Skype to operate. In the UAE for example, Skype has been unable to acquire the proper telecom operator license.

No matter where you are, however, you can always access Skype with the help of a good VPN service. Short for a Virtual Private Network, a VPN encrypts all of a device’s internet traffic and routes it through an intermediary server in an online location of the user’s choosing. The encryption hides the contents of your online activity, and the server masks its destination.

We go into details on each of the VPN service providers that unblock Skype below, but if you don’t want to read the whole post, below are our top picks.

NordVPN is offering a fully-featured risk-free 30-day trial if you sign up at this page. You can use the VPN rated #1 for Skype with no restrictions for a full month. As such, it’s perfect for anyone hoping to stay in touch with friends during their travels abroad.

Your ISP cannot see that you are using Skype when the VPN is enabled, but we do not encourage you to break the law in countries where using a VPN or Skype is illegal.

To narrow down the list of the best VPNs for Skype, we chose the following criteria:

These are the best VPN service providers for accessing Skype from any country.

NordVPN operates servers locations in over 60 countries and allows up to six connected devices at once. Some of those servers are optimized for torrenting and improved digital privacy (Tor over VPN, double VPN). Strong encryption is used on all connections and the company is constantly enhancing its security offering. NordVPN maintains a strict zero-logs policy on both traffic and metadata. Apps are available for Windows, Linux, MacOS, Android, and iOS.

BEST VPN FOR SKYPE:NordVPN is our first choice. With a large range of servers and high speeds, this is a good all-rounder option that unblocks Skype and most other VoIP services. Great privacy and security credentials. Offers a risk-free 30-day money back guarantee.

Surfshark operates more than 3,200 servers in 60+ countries worldwide. It’s fast enough for most purposes (although there is the occasional slow server) and capable of unblocking Skype from almost anywhere. Your connection is secured with 256-bit AES encryption, protection against WebRTC, DNS, and IPv6 leaks, a no-logs policy, and a kill switch. Surfshark offers a NoBorders mode that lets you bypass country-wide blocking, and it even works in China. Apps are available for Windows, iOS, Android, Linux, and MacOS but it can also be manually configured for use with supported home routers.

ExpressVPN optimizes every one of its servers in all 94 countries it operates in, so you should never have a problem with call quality. The provider uses high standards of encryption and authentication, including perfect forward secrecy. It keeps no traffic logs and minimal, non-identifying metadata logs. Well-designed, easy-to-use apps are available for Windows, MacOS, Android, iOS, Linux (command line), and certain wifi routers. ExpressVPN works in countries such as China, the UAE and others where Skype and many VPNs are blocked from working. Great for video conferencing and instant messaging.

ExpressVPN is also a great option for streaming and works with major platforms including Netflix, Amazon Prime Video, BBC iPlayer, Hulu, Disney Plus and many more.

ANONYMOUS CALLING:ExpressVPN is a strong choice. Reliably unblocks Skype as well as many other VoIP apps. Top performer with unblocking streaming services. Hard to beat on online privacy and security. There is a 30-day money-back guarantee.

IPVanish also owns all of its physical servers worldwide, guaranteeing you speed with unlimited bandwidth and no data caps. It comes packaged with a no-logs policy and military-grade encryption. Users can enable some privacy settings including IPv6 leak protection, DNS leak protection, a kill switch, and traffic obfuscation. Apps are available for Windows, MacOS, Android, and iOS.

SECURE ALL YOUR DEVICES:IPVanish has a large network of servers. Generally solid for Skype users, and folks who need the highest standard of digital privacy, but look elsewhere if you want to unblock popular streaming content. 30-day money back guarantee.

VyprVPN owns and operates all of its own servers and network equipment, unlike most other providers who rent out from third parties. That means better privacy and performance, ensuring clear audio and video quality when using Skype. For those concerned about government surveillance, an optional “Chameleon” protocol promises a stealthier connection than what you get with the standard OpenVPN protocol. The company keeps no traffic logs but does store some metadata. Apps are available for Windows, MacOS, Android, and iOS.

Has an easy set up:VyprVPN is user friendly. Works well with Skype and other popular VoIP services. Good performer but a bit pricey. 30-day money-back guarantee.

PureVPN boasts a huge range of servers across 78+ countries. The company uses 128-bit AES encryption, which isn’t as strong as its rivals but it’s plenty strong enough for the vast majority of users. No traffic logs are stored on company servers. Connection speed is excellent and the apps are easy for novice’s to pick up quickly. Apps are available for Windows, MacOS, iOS, Linux, Android, and DD-WRT wifi routers.

EASY TO USE:PureVPN has a great app. Good for unblocking Skype connections. Offers strong security and privacy settings. It pegs some fast speeds but can have some connection issues. 31-day money-back guarantee.

How to unblock Skype with a VPN

If you’re in a place where Skype is blocked, follow these instructions to unblock it with a VPN.

Here’s how to unblock Skype from anywhere with a VPN:

Not just any VPN will work with Skype, especially if you’re traveling in a country where VoIP services are normally inaccessible. That’s why we’ve put together a set of strict criteria that VPNs must meet to even be considered for a spot in our list. You’ll find this below, along with a brief explanation of why each is so important:

Check out our detailed guide to how we test VPNs at Comparitech.

Will using a VPN with Skype protect me from government surveillance?

Skype calls and messages are encrypted, but not end-to-end. The service uses strong 256-bit AES encryption and unbreakable 2,048-encryption keys. Instant messages are sent using either TLS or AES encryption. The only thing that’s not encrypted is the part of a mobile or landline call that travels over ordinary phone networks (PSTN).

However, despite that encryption, reports have surfaced suggesting certain governments listen to Skype users’ conversations.

In 2013, Edward Snowden revealed that the NSA had widespread access to voice and video calls on the service which were presumed to be encrypted. Even before Skype was acquired by Microsoft, Snowden showed the company was working with the NSA. Since it was acquired in 2011, the amount of information being collected has tripled and now includes video.

We now know that American, Russian, and Chinese officials can eavesdrop on Skype conversations. While the exact method isn’t abundantly clear, we have a pretty good idea of how it works. Normally, when you call or message someone on Skype, that data is encrypted using a session key randomly generated on your computer. That key is sent to the recipient so that only they can decrypt it.

When a government authority requests, however, Skype can covertly switch the session key on your device for one generated on Skype’s servers. When the voice, video, and message data passes through Skype’s servers, they can then intercept it and decrypt it for the authority to see.

So, will a VPN protect you from this? Probably not, to be frank. It’s not clear what Microsoft’s procedure is on this. If you connect to a VPN and change your IP address to a country that’s not Russia, the US, or China, then it’s possible you would be exempt from being spied on. But it’s also just as likely that Microsoft will hand over information on demand no matter where you are located.

If you want to use Skype, your data must pass through Microsoft’s servers without VPN encryption at some point. There’s simply no avoiding this. If this is a deal-breaker, try an alternative VoIP service.

Note that this tactic is probably not used on a mass scale for bulk data gathering. It would most likely happen on an individual, case-by-case basis only when requested by authorities.

If you live in China and go to the Microsoft website to download Skype without a VPN, you’ll have a good chance to end up with TOM Skype. While it looks more or less the same, TOM Skype is a China-compliant version of Skype that allows Chinese authorities to independently spy on and censor conversations.

Instead, connect to a VPN and download the international version that Chinese authorities can’t crack, at least not without Skype’s explicit permission and assistance.

Tip: The Chinese government blocks many VPNs. We maintain a list of working China VPN services.

What countries is Skype blocked in?

Can’t I use a free VPN provider where Skype is banned?

Furthermore, free VPNs are not to be trusted. They often monitor users' activity while using the VPN and sell data collected to third-party advertisers. They impose bandwidth limits and data caps, and many are even known to carry malware.

Does Skype work in China?

Skype is intermittently blocked in China, including Skype's website and its actual service. Users report being able to use Skype in China without a VPN, though it is unreliable. A VPN will ensure you can call and chat on Skype without restrictions, and without worrying about government spying.

How to make Skype faster?

Skype call quality and reliability depends largely on your available bandwidth. If your calls are of low quality or are frequently interrupted for buffering, then your first step should be to increase bandwidth.

You can improve bandwidth by disabling downloads on any devices in your home, including streams and system updates, so that Skype has more bandwidth to work with. Turn off any apps or devices that Skype is sharing bandwidth yet.

All of the VPNs we recommend should give you sufficient bandwidth, but it will help to choose a server located near either yourself or the recipient of your call. This will reduce the time it takes for data to travel between you and the other party.