The Best VPNs for Dating Sites

A Virtual Private Network (VPN) can be used to unblock multiple online dating sites like MeetMe, OkCupid, Hinge, Zoosk, Match, and more. Found the best VPNs for dating and how to use them here.
James Milin-Ashmore 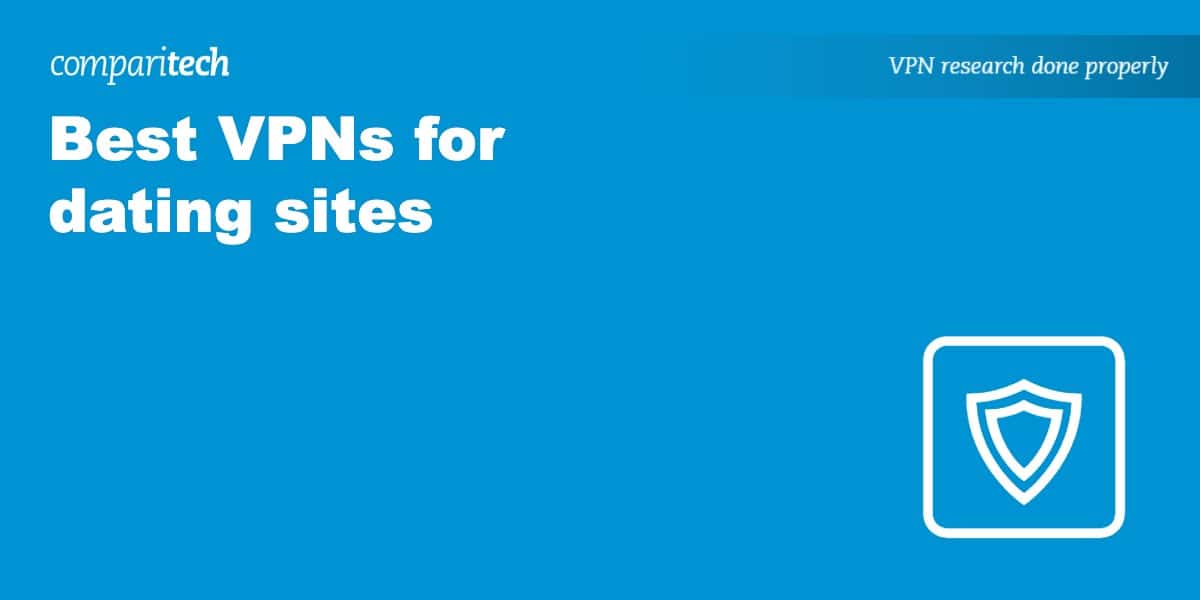 An estimated 8,000-plus online dating sites online, with the majority of users flocking to well-known options like Tinder, which controlled 32% of the U.S. market in January 2022. Although very useful for finding love, dating sites also come with risks. One way you can mitigate some of these risks is by using a VPN.

Virtual Private Networks (VPNs) will allow you to bypass restrictions with a number of popular dating sites, as well as offer the user improved online privacy at the same time. Many online dating services are blocked or unavailable in countries around the world, including Pakistan and Saudi Arabia. However, only some VPNs will be able to bypass blocks and work with online dating sites consistently.

We’ll take you through seven of the best online dating VPNs in more detail, but we’ve also included a roundup of the best options below.

Here’s a quick summary with some of the best VPNs for dating sites:

NordVPN is offering a fully-featured risk-free 30-day trial if you sign up at this page. You can use the VPN rated #1 for dating sites with no restrictions for a month.

The best VPNs for dating sites

We’ve picked out the best VPNs for dating sites according to the following criteria:

Here’s our list of the best VPNs for dating sites:

NordVPN is our top pick if you need a reliable provider for dating sites. The VPN has been operating in the online security sector for over a decade, picking up a wealth of experience when it comes to accessing blocked websites and services. It has over 5,500 ultra-fast servers in 59 countries, ensuring that local dating apps and sites will always be only a few clicks away. The same goes for a wide range of streaming services, including US Netflix, and BBC iPlayer.

It’s also ideal if you want to keep your dating life private. The service keeps no logs, and it uses 256-bit AES encryption coupled with 2,048-bit SSL keys. NordVPN offers DNS leak protection as standard, and can be used safely in regions like the UAE and Dubai.

As well as apps for Windows, MacOS, iOS, and Android, there’s Linux support, along with Chrome and Firefox browser extensions. Six devices can be used with a single account simultaneously.

BEST VPN SERVICE FOR DATING SITES:NordVPN is our top recommendation for accessing a range of blocked sites and services. Superb speeds and security features. Includes a risk-free 30-day money-back guarantee.

Read our review of NordVPN here.

Surfshark is a viable alternative if you’re looking for a budget VPN that ticks all of the boxes for online dating. With over 3,200 servers in 99+ countries, and exceptional connection speeds, it works to unblock dating apps like Tinder from abroad, along with various international streaming platforms like Hulu and BBC iPlayer.

Surfshark logs no identifiable data, and it doesn’t scrimp on security. Sturdy 256-bit AES encryption will keep your data secure. It offers malware scanning, as well as a kill switch, and protection against IPv6, WebRTC, and DNS leaks. It works in the UAE and China, so you’ll be able to connect to sites safely from almost anywhere in the world.

You’ll find native app support for MacOS, iOS, Android, Windows, and Linux devices, as well as Chrome and Firefox versions. Another perk is that it can be used with unlimited simultaneous devices, further lowering the cost of a single account if shared.

CAPABLE BUDGET DATING VPN:Surfshark will handle all of your VPN dating needs, and it’s hard to find many faults despite the low price tag. Comes with a 30-day money-back guarantee.

ExpressVPN is a brilliant all-purpose provider that never seems to come unstuck when accessing blocked sites or services. It’s perfect if you’re in need of a VPN for dating sites, even if the price tag is a little higher than the competition. One drawback is that you’ll only be able to use five simultaneous devices, but that’s offset by excellent speeds and numerous security features.

Based in the British Virgin Islands, the service benefits from servers in 94 countries, which allows you to access dating sites in a range of different locations. It’s one of the best VPNs for beginners, and comes with 256-bit AES encryption, a kill switch, DNS protection, and superb customer service.

GREAT UNBLOCKING ABILITIES:ExpressVPN is a reliable service for online dating, with quick speeds and the ability to unblock lots of sites and services worldwide. Offers a 30-day money-back guarantee.

CyberGhost has one of the largest networks overall, with over 7,000 VPN servers located in 90+ countries backed by speeds fast enough for 4K streaming. It’s a great choice for accessing online dating platforms, no matter where you are in the world.

It also scores highly in terms of privacy, with the company headquartered in Romania so it’s not subject to any mandatory data retention laws. CyberGhost uses 256-bit AES encryption by default, and keeps no identifying user logs. It has a kill switch as standard, and offers the speedy WireGuard protocol.

Customer service is top notch, while apps are available for Windows, macOS, iOS, Linux, and Android. CyberGhost allows for up to seven simultaneous connections, so you’ll be able to use an account with various devices. It’s also highly affordable when looking at its longer subscriptions.

BEGINNER-FRIENDLY VPN:CyberGhost is easy to use and has a large, speedy network of servers to choose from. Comes with a 45-day money-back guarantee.

IPVanish is a leading provider with 2,000+ servers that are optimized for streaming and stability. This makes it another viable option for accessing dating sites with absolutely no issues. Its server network spans 75+ VPN locations, and works to unblock platforms like Netflix and HBO Max with no hassle. It’s also one of the few providers that owns and operates all of its physical hardware, rather than renting it from a third party.

The service keeps no record or logs of VPN use, and offers DNS leak protection, unbreakable 256-bit encryption, and a kill switch to keep your dating habits private.

You’ll find IPVanish apps for iOS and Android, along with desktop clients for Windows and macOS. Best of all, you’ll be able to use one account with an unlimited number of simultaneous devices. It’s a perk not often seen with budget providers.

Read our full review of IPVanish to find out more.

PrivateVPN has opted for quality over quantity, with a dedicated selection of 200+ servers and locations in 60+ countries that can be used to access numerous dating apps, along with various other geo-restricted services. This includes the likes of Disney Plus and Netflix US, with impressive speeds that are more than quick enough for streaming.

The Swedish provider offers perfect forward secrecy, a kill switch (for Windows), DNS and IPv6 leak protection, and the choice between 128-bit or 256-bit encryption. A strict no-logs policy ensures that your data is safe and secure at all times.

Read our review of PrivateVPN.

Atlas VPN is arguably best known for its capable free tier. Launched in 2019, it has apps for PC, Mac, Android, and iOS, which can be used to access a range of streaming platforms, as well as popular dating sites. You’ll be able to use unlimited devices simultaneously with Atlas VPN, while benefiting from uncrackable encryption, and protection against IPv6, DNS, and WebRTC leaks.

Despite being a newer provider compared to the others on the list, Atlas VPN has extra security features such as MultiHop servers. It’s one of the fastest providers overall, and it comes with a strict no-logs policy. However, it only offers 750 servers across 44 locations.

You’ll be able to get in contact 24/7 over live chat, although it probably won’t work in China.

Find out more in our AtlasVPN review.

How to use a VPN with dating sites

It’s quick and easy to access dating sites with a VPN as long as the provider has the ability to bypass any blocks in the first place.

Here’s how to use a VPN with dating sites from anywhere in the world:

Methodology: How we found the best VPNs for dating sites

With so many VPNs to choose from, which is best for accessing blocked dating sites from anywhere with no hassle? Here is the criteria we used when creating our list of the best VPNs for dating sites, with a brief description of why each one is important:

Can I use a free VPN for dating sites?

The majority of free VPNs are blocked by dating sites, while speeds and bandwidth are likely to be capped to some extent if you do somehow manage to gain access. Of course, free VPN services can be tempting, but you might end up paying in different ways, such as if the provider sells your data on to third-parties.

Free VPNs may also inadvertently pose a security risk. Take Hong Kong-based UFO VPN, who were found to have exposed millions of user logs in 2020. The leaks included ‘plain text passwords and information that could be used to identify VPN users.’

Instead, we’d advise you to check out our recommended list of the best VPNs with a free trial.

Why use a VPN for dating sites?

A VPN will unblock dating sites and apps by encrypting your internet connection and assigning you a new IP address. You can then use the dating app privately and from whichever location your VPN server resides. This is ideal if you’re unable to access a dating site or service from abroad, or if you plan to meet up with people from a different region. A dating site might be blocked by your ISP or the government, or you might have been unfairly banned from a service.

You’ll also be better protected in terms of privacy, which makes sense given the personal nature of online dating.

Why do dating sites block VPNs?

Many dating sites will block the IP addresses used by VPNs. A service may want to verify that a user is using their real location data, helping to keep scammers off of their platforms.

Blocks may also be enforced by your internet service provider due to government censorship. The concept of online dating is alien in some cultures, and outright illegal in others.

Dating sites have started to crack down on the use of VPNs, especially if the IP address has been used for fraudulent means in the past.

Can I change my profile location with a VPN?

It depends on the dating site or app you’re using. For example, you used to be able to spoof your location on Tinder using a VPN, but the company attempted to put a stop to changing your IP when it introduced Tinder Passport, a paid feature that replicates this functionality.