Thinking about getting a VPN? Private Internet Access (PIA) might just be perfect for you. It’s a good time to sign up too; with PIA’s Black Friday and Cyber Monday deals (now live), you can claim a huge discount on your VPN subscription.
Mark Gill TECH JOURNALIST, VPN AND PRIVACY SPECIALIST 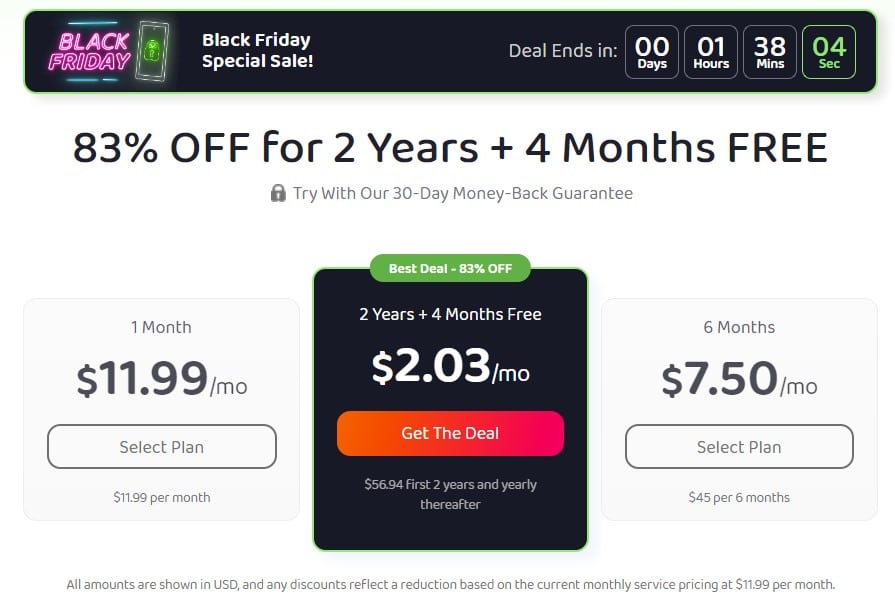 Save 83%:Private Internet Access is offering 83% off its 2-year plan as well as four months extra free.

Can’t decide which VPN best fits your needs? Perhaps the Black Friday promotions can help you come to a decision. There are a ton of VPNs with special offers at this time of year, so whether you’re looking to unblock geo-restricted websites or simply enhance your online privacy, there’s likely to be one that meets your requirements. Take Private Internet Access, for instance: it’s a high-quality VPN with plenty to offer, and thanks to its Black Friday and Cyber Monday deals (now live!), you can get a subscription at an even better price than usual.

You can now take advantage of the Private Internet Access Black Friday and Cyber Monday deals. This established VPN provider is offering four months extra with its two-year plan, plus a huge 83% discount. Instead of costing you $334.60 USD for the same length of coverage, you’ll now pay just $56.94 (GBP £49.72). This works out at only $2.03 (GBP £1.77) per month.

If you’d rather not commit to a two-year subscription, it’s worth bearing in mind that the six-month plan of Private Internet Access is also discounted. This is available for $45, which works out at $7.50 (GPB £6.55) monthly. When you compare these two Black Friday deals with the monthly plan ($11.99/month), it’s clear that the longer the subscription, the more money you can save.

Why should I buy Private Internet Access on Black Friday?

Much like with many other products and services on Black Friday, VPN prices see heavy reductions in price. This makes Black Friday (as well as Cyber Monday) an ideal time to buy, particularly if you’re looking at long-term subscriptions as they typically offer the biggest savings. These deals are only available for a limited time, so we’d normally recommend you buy before the close of Cyber Monday, after which prices will return to normal.

Private Internet Access is one of many VPNs offering a Black Friday deal. Unlike most of its rivals, though, it’ll be running this promotion until the end of 2022. We’ve found PIA to be a highly secure provider, which is just one of the reasons why it’s worth buying while available at the current price. Note that not all VPNs you’ll come across offer the same kind of value. For this reason, we’ve compiled a list of the best Black Friday VPN deals of 2022 to help you find the right VPN for your needs.

With Private Internet Access, you’ll be able to connect to servers in dozens of countries including the United States and United Kingdom. As such, you can use this VPN to unblock a wide range of region-locked websites and services from abroad. It offers unlimited bandwidth which makes it a good choice for streaming and torrenting. Speaking of torrenting, it also supports P2P.

One area in which Private Internet Access particularly stands out is security. For starters, all of your internet traffic is secured with 256-bit AES encryption. Also included is DNS leak protection and a kill switch, plus this VPN doesn’t keep any identifying logs of its users. It’s also possible to sign up for Private Internet Access anonymously. That’s because, unlike the vast majority of VPNs, you can pay with a gift card.

This VPN is suitable for beginners thanks to its apps for Windows, Mac, Android, iOS, and Linux as well as browser extensions for Chrome and Firefox. If you have multiple devices to secure, it’s worth knowing that Private Internet Access lets you have up to 10 simultaneous connections (more than most VPNs). Better still, this VPN comes with a 30-day money-back guarantee so you can try it risk-free. If unsatisfied, you can simply request a full refund.

Features offered can vary from VPN to VPN. This is therefore a good way to separate one service from another and potentially make a decision as to which is right for you. Here are some of the key features included with Private Internet Access:

Worried that the current deal offered by Private Internet Access will disappear following Black Friday? There’s good news! This VPN promotion actually runs until the end of the year, well past Cyber Monday (November 30th). As such, you have a little bit of extra time to make a decision. However, we don’t recommend that you take any longer than that because normal pricing will resume shortly after. Black Friday and Cyber Monday is therefore the best time to get a great deal.