Private Internet Access not working with Netflix? Here’s what to do

Private Internet Access not working with Netflix? We'll show you why PIA can struggle with Netflix and provide some solutions.
Ian Garland Streaming, Kodi and VPN Expert 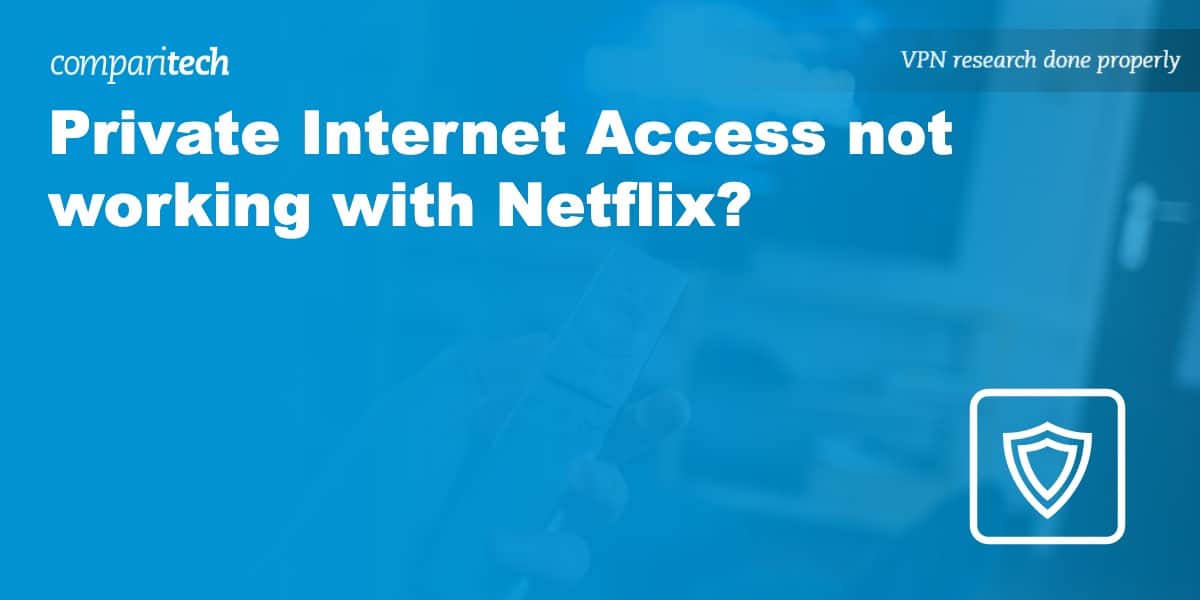 Like most major streaming platforms, Netflix geo-restricts its content. In theory, this means that users in specific countries can only watch some shows and movies. In practice, though, it means that travelers visiting other countries often find themselves unable to continue watching their favorite shows.

It’s possible to securely access Netflix from anywhere using a Virtual Private Network (VPN) but many providers no longer work with this service. Usually, if you try to use Netflix with a VPN active, you’ll see the following error: “You seem to be using an unblocker or proxy. Please turn off any of these services and try again.”

As we’ll explain below, while PIA can help you securely access Netflix but it’s not the most reliable VPN for the job. For this reason, we recommend using NordVPN or ExpressVPN instead.

WANT TO TRY A BETTER ALTERNATIVE FOR FREE?

NordVPN is offering a fully-featured risk-free 30-day trial if you sign up at this page. You can use this top-rated VPN with no restrictions for a month—perfect for anyone interested in seeing what other Netflix libraries have to offer.

There's no catch—just contact support within 30 days if you decide not to continue with NordVPN and you'll get a full refund. Start your NordVPN trial here.

How to securely stream Netflix with Private Internet Access

Private Internet Access currently offers servers in 78 countries worldwide. To test this service, we connected to a server in several of these locations (clearing our stored cache and cookies after each step), then attempted to use Netflix.

We found that while it’s possible to securely access a handful of libraries, in most cases, users will trigger an error when they attempt to watch anything. Like several other VPNs, PIA has focused only on providing access to only the most in-demand Netflix libraries, and as such, the vast majority of its servers will not allow users to stream Netflix abroad.

The table below shows which versions of Netflix we were able to access via PIA servers during this round of testing:

While PIA works with a few regional Netflix libraries, it might not be the most reliable way to access the service abroad. Company representatives have publicly mentioned that Netflix blacklists PIA’s servers and IP addresses, which might explain why PIA sometimes struggles with catalogs that were previously accessible. PIA also has fairly inconsistent speeds, which means that the quality of your experience is dependent on the server you use and how far away it is, and the time of day.

If you can’t access a version of Netflix that PIA should work with, customer support may be able to point you to a server that still works. However, you may be better off with a VPN provider that works more reliably with Netflix. We found NordVPN to be the most reliable.

Which are the best VPNs for streaming Netflix abroad?

Netflix is one of the world’s most popular streaming platforms and can afford to devote a huge amount of resources to blocking VPN users. This means that VPN providers, especially smaller ones like PIA, often find it difficult to keep up. However, there are a few VPN services that work reliably with Netflix, and we’ve listed the best of these below. It’s worth noting that we tested just 30 different regions, so the number of libraries they can securely access could be even higher.

RELATED: Best VPNs for Netflix (what we learned from over 5,000 tests)

Can’t I just watch Netflix with a free VPN instead?

Free VPNs can be tempting, but they come with several major disadvantages for anyone looking to stream. For example, these services usually don’t have enough servers to accommodate all of their users. This means you’re likely to experience slow speeds, which leads to low-resolution video streaming and frequent buffering. Further, your chosen service might not have servers with local IP addresses in your required country, and there’s no guarantee it will even work with Netflix in the first place.

Finally, there’s no easy way to tell if you’re actually using a legitimate free VPN or just one of the many malware-carrying apps lurking on popular app stores. Your chosen VPN might not be safe even if it doesn’t contain malware: recent research found that 18% of tested apps never encrypted user data at all, and 66% were vulnerable to DNS leaks. Well-known services aren’t necessarily safer, though; back in 2016, Hola was caught selling user bandwidth to help run a botnet.

To stay safe online, we recommend using a VPN with a good reputation and a history of standing up for its customers’ online privacy.

Will using a VPN slow down my network speeds?

You can expect a slight reduction in network speed regardless of which VPN you choose. It’s worth noting that your speeds are also influenced by the protocol and type of encryption used, as well as the current server load and its geographical distance from you. However, even before taking these factors into account, some services have more of an impact on your internet connection than others.

Generally, you can expect to lose about one-third of your internet traffic speed when using a VPN. Netflix recommends a download speed of at least 3 Mbps for streaming standard-definition video, but you’ll need higher speeds for HD and 4K content (around 5 Mbps and 25 Mbps, respectively). As of 2017, the average internet connection speed in the US was around 18 Mbps, but as long as you get 8 Mbps or so, you shouldn’t have any issues streaming Netflix with a VPN.

Which shows can I watch abroad with PIA?

Although PIA can’t help you securely access many different Netflix catalogs, it does work with some of the more popular ones. Below, we’ve created a short list of the content you’ll be able to watch from abroad with PIA:

You likely already know that VPNs encrypt your traffic. However, if your connection to the VPN is interrupted and you have the kill switch turned off, you’ll just be browsing like you would normally. This could potentially be a real problem if you were in a country like China or the UAE, where internet usage is heavily censored and under surveillance. In contrast, a kill switch would prevent you from browsing until you could reconnect to the VPN.

Like many other providers, Private Internet Access offers a kill switch. However, this one is slightly different, allowing you to choose between three modes (Off, Automatic, and Always) instead of just off or on. The automatic mode only blocks internet traffic if you were disconnected unexpectedly, while the always setting only allows you to browse when connected to the VPN. This is likely overkill for most users, but it’s certainly a nice option to have.

How many devices can I use with PIA?

Most VPNs on the market allow users to connect around five or six devices at once. However, Private Internet Access stands out from the crowd by permitting up to ten simultaneous connections. This should mean that you can secure most, if not all of your devices, although if this still isn’t enough, or if you’d rather ensure every device on your home network is protected automatically, you can manually install PIA on select home routers.

Can I install Private Internet Access on my router?

It’s absolutely possible to install Private Internet Access on an internet router. In fact, this service even provides detailed setup guides to configuring it for use with DD-WRT, Tomato, LEDE, and ASUS-WRT routers, as well as pfSense gateways.

Router VPN installations are a fairly involved process, and there’s plenty that could go wrong. If you’re unsure of what to do, it’s best not to press ahead regardless. Remember: if you’re having problems, you can get help at any time, day or night, thanks to this VPN’s 24/7 live chat help desk.

There’s a pretty clear-cut answer to this in the Private Internet Access knowledge base. It says (emphasis theirs): “NO! PIA absolutely does not keep any logs, of any kind, period.”

Additionally, PIA has a history of looking out for its users’ privacy. After the Russian government seized its servers in the hopes of accessing user activity histories, the provider immediately stopped hosting servers in that country.

The only information that this VPN stores is your name, payment information, and email address (taken during registration). This is saved not to track you, but to allow you to login and have your payments processed by vendors like MasterCard or PayPal.

Why is PIA not working with Netflix consistently?

PIA should be able to securely access a few of the most popular Netflix libraries, but if you're having issues, there could be a few reasons why.

First, it could be that Netflix is using old location data. This could cause problems if it points to a different country than your IP address does. To fix this, simply clear your browser’s cookies and reload the page.

Your device itself may also be giving Netflix hints that you’re using a VPN. For instance, the Netflix apps have been known to use GPS data to cross-reference your location. This could mean you’re able to watch on PC but not on mobile devices. To resolve this, you’ll have to either find a GPS-spoofing app or use a VPN that takes care of this automatically.

Finally, it could be that Netflix has blacklisted the server you’re using. If so, switching to a new server in the same location should help. Failing this, it’s a good idea to get in touch with customer support and ask them if there’s a specific server that still works.

Disconnecting from Private Internet Access is very simple: just click the big green power button on the main page. In the unlikely event that the app has frozen, you can kill it from the task manager, then restart it before disconnecting as normal.