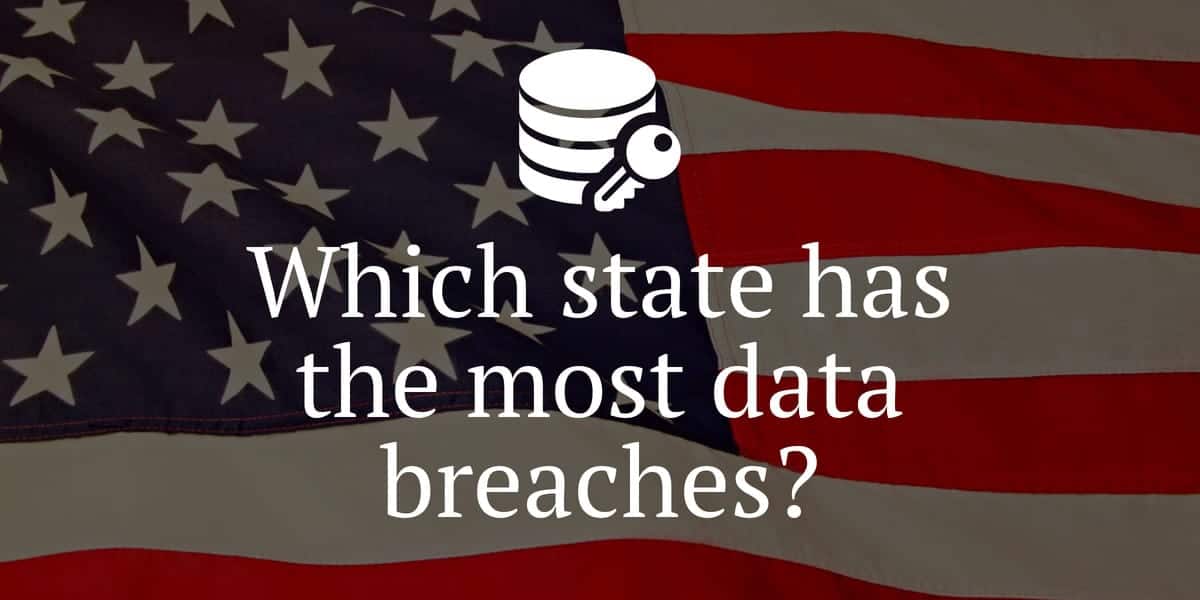 Data breaches are common in headlines these days, but they are not equally spread out in terms of location. Data breaches occur far more often in some US states than others, and the number of records lost or stolen varies as well.

Although we attribute breaches to the states where they occurred, the breached records often impact people in several or all US states.

US States with the most data breaches

It’s perhaps no surprise that California, a huge state and home to more tech and internet companies than any other, suffers the most breaches. California simply has a lot of data to breach. That being said it does take consumer privacy in other ways very seriously.

If a data breach occurs in the US, there’s a very high chance that the breached company is based in California. If not, then it could well have happened in a company incorporated in our next state…

Similar to California, New York is home to a huge number of companies with big, valuable databases. The total number of records exposed, however, isn’t as high as for some states with a fraction of the number of breaches.

Texas is the second-biggest state in the US by both area and population, and that comes with a large number of companies and their valuable data.

The majority of records exposed through data breaches in Texas came out of the Epsilon breach in 2011. The email marketing firm leaked 50 million to 250 million email addresses and names. It worked with several big-name US retailers and financial companies like Kroger, Walgreens, Marriott Rewards, Capital One, and Citibank.

While Oregon has a relatively low number of data breaches compared to the states mentioned above, it does have the second-highest number of records affected. The vast majority of the 1.37 billion records leaked came from one source: River City Media. The company’s breach in 2017 exposed 1.34 billion email accounts, representing one of the largest data breaches of all time. River City Media collected information on millions of individuals without their consent as part of its spam operation, and then failed to protect that data. That information included email accounts, full names, IP addresses, and physical addresses.

Bethesda, Maryland is home to Marriott International, which in 2018 suffered one of the largest data breaches in history. Of the total 388 million records exposed in the state over the last 10 years, the Marriott breach accounts for 383 million of them.

Marketing Firm Exactis is responsible for the bulk of Florida’s exposed records. The company’s 2018 data breach of 340 million records included names, phone numbers, addresses, email addresses, interests, habits, ages, and genders of the majority of Americans. Much of that data was collected and held by Exactis without the victims’ knowledge.

Georgia is home to what is possibly the most infamous data breach in history: Equifax. In May 2017, the Atlanta-based credit bureau announced a data breach involving 145.5 million Americans’ names, Social Security numbers, birth dates, addresses, and more. That doesn’t even include the non-Americans involved. Despite the breach having occurred more than two years ago, the data has yet to surface, leading some to believe it was a nation-state attack.

Privacy Rights Clearinghouse and Identity Theft Resource Center collate information for data breaches across the US. We used these as our primary sources, while double-checking the information and removing any duplicates.

Where possible, the figures for the breaches have been assigned to the state where records were exposed. However, in some cases, the figures will be allocated to the state in which the company involved operates its headquarters; this is due to several states often being affected and a breakdown of figures per state being unavailable.

If the data breach was US-wide, it falls under “US” as it cannot be pinpointed to a state.

Even when we know where data breaches occur, the people whose data was exposed could be from anywhere.

In some instances, the breach occurred in a prior year but wasn’t brought to the attention of the authorities until much later.

Not every breach report lists the number of records exposed. It might be unknown or below the threshold imposed by the state.

Data breaches by US state figures can be found in this spreadsheet.