The State of Data Breaches in the US: Report and Statistics 2020 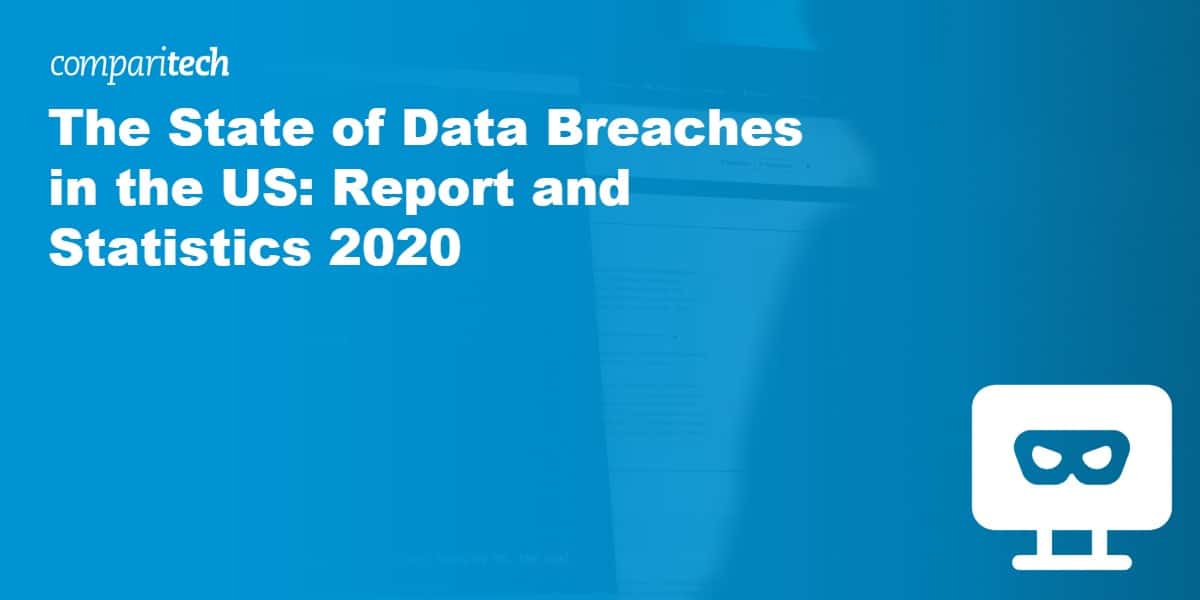 In 2020, the world entered completely new territory–in more ways than one. Despite the number of data breaches within the United States dropping by 19 percent from 2019, organizations began to face different kinds of threats, especially toward the end of the year.

With the sudden need for employees and students to work from home, and resources allocated elsewhere, cybercriminals were quick to adapt where companies perhaps couldn’t.

What happened with data breaches in 2020?

This report examines the costs and trends of data breaches across different sectors, the biggest attacks of the year, the impact working from home had on data breaches, and what action needs to be taken going forward.

Due to a lack of publicly available data, there is no exact figure for the cost of data breaches in 2020. However, IBM’s Security Report estimates that the United States has the highest global cost per data breach. At $8.64 million per breach, this is 77 percent more than the global average cost of $3.86 million.

Based on this figure per breach, that would put the total cost of data breaches to the United States at around $9.6 billion. While astronomical, this figure could be even higher, as state data breach notification laws often only require notification if a certain number of people are impacted (often 500 or more).

The IBM study also suggests that customers’ personally identifiable information (PII) is the most frequently compromised (and most costly) type of record. The average cost of a breach of this information is $150 per record. Across all types of breached information, the cost is only slightly lower at $146 on average. But if the record is breached in a malicious attack and involves PII, the cost goes up to $175.

Based on 300,562,519 individuals being impacted by publicly reported data breaches in the US in 2020, the cost of these records being exposed is estimated at around $44 billion (using the average cost of $146 per record).

How did it happen?

One ransomware attack can generate as much revenue in minutes as hundreds of individual identity theft attempts over months or years. (Notfied)

According to ITRC’s Notified report, cyber attacks accounted for the largest number of data breaches with 878 attacks and 169,574,338 individuals impacted. This was broken down by category with phishing/smishing being the most popular way of attacking (43.7%), followed by ransomware (18.1%).

Other root causes include :

Notified suggests that hackers predominantly preferred ransomware or phishing attacks because they “require less effort, are largely automated, and generate payouts that are much higher than taking over the accounts of individuals”. We can see this reflected in our own ransomware studies.

In 2019, there were 57 ransomware attacks on hospitals affecting 3,178,538 records. In 2020, the number of attacks increased by 61 percent to 92, and the number of records affected increased by 468 percent to 18,069,012. We estimated that these attacks cost healthcare organizations $20.8 billion in 2020 with hackers receiving over $2 million (this, however, is likely to be much higher but is based on actual reported figures–many organizations do not reveal figures so as to try and prevent future attacks).

Why the spike in ransomware attacks on hospitals in 2020?

With reports of hospitals being under enormous amounts of pressure amid the pandemic, they could ill afford system shutdowns. And with the average downtime from ransomware attacks (when no payment is made and systems are restored manually) being two to three weeks long, this perhaps increased the chances of ransom payouts being made.

Phishing attacks across all sectors may also have been more successful/effective due to pandemic-related issues. From employees working from home without the right protections to lack of attention due to higher pressures and stresses elsewhere, phishing attacks slipped through the net for many organizations.

In 2020, the FBI’s Internet Crime Complaint Center (IC3) received 791,790 complaints with reported losses of more than $4.1 billion. This was a 70 percent increase in the number of complaints from 2019. Of these complaints, over 30 percent were phishing scams (241,342) which resulted in losses of around $54 million.

Educational institutions were particularly vulnerable to phishing scams, too. Keith Krueger, CEO of the ed-tech advocacy group the Consortium for School Networking (CoSN), was quoted as saying: “In a school environment, about 3 percent of teachers click inappropriately on phishing scams. That was jumping to 15 to 20 percent from home, so a lot of cybercriminals are getting into the network.”

Why did it happen?

While data breach figures were lower in 2020, this doesn’t mean cybercriminals were quieter or any less successful than in previous years. Rather, they’d adapted to the pandemic and were targeting the most vulnerable–healthcare organizations under increasing amounts of pressure, educational institutions adapting to remote learning, and employees working from home/under new and unknown pressures. They exploited these vulnerabilities with specific attacks that would cause the most damage and provide the greatest financial gain.

Some of their success may also be attributed to organizations being underprepared for the changing working environments.

A survey conducted by Malwarebytes collected data from more than 200 managers, directors, and C-Suite executives in IT and cybersecurity roles in companies across the US. It found that when it came to preparedness for working from home:

A recent study by our researchers at Comparitech found that there were 46,866 unfilled “information security analyst” roles at the start of 2021. With the latest data suggesting that 125,950 workers are currently employed in these roles, this demonstrates that over a third more cybersecurity roles need filling than what are already filled.

This is reflected by the Bureau of Labor Statistics estimation that the number of information security analysts is expected to grow by 31 percent from 2019 to 2029. The average for computer occupations is 11 percent, while employment growth for all roles is a much lower 4 percent.

In an article in Forbes, Emil Sayegh, president and CEO of Ntirety, describes the current shortage of workers as a “cybersecurity talent drought”, suggesting it only got worse toward the end of 2020. He states that organizations need to have a 24x7x365 cybersecurity team in place to defend against attacks in real-time. By lacking in this, companies risk being exposed to threats, have inexperienced professionals trying to implement advanced security techniques, and lack knowledge when it comes to working with technology-based solutions.

What needs to be done?

There is no one-size-fits-all approach to shoring up companies against data breach attacks. But there are a number of best practices organizations can implement to better safeguard themselves from breaches and other cyber attacks.

At least 462 healthcare organizations suffered data breaches in 2020. Breaches spiked in September and October with 77 and 55 reported respectively (compared to around 30 to 40 in all other months). Aside from Blackbaud (which was significant enough to warrant its own section), some of the most standout 2020 data breaches in healthcare were:

There were 275 educational entities affected by data breaches in 2020, with the second half of the year accounting for almost 80 percent (218) of the year’s breaches. November was the hardest-hit month with 51 breaches in total.

Here are some of the most high-profile educational data breaches of 2020:

There were 66 government data breaches in 2020 with peaks in January (11) and May (12). Of significant size were the following:

During the month of May 2020, a professional ransomware group stole information from cloud provider company, Blackbaud, affecting 480 customers. The stolen information included personal information relating to more than 12.5 million people. This was later reported to have been destroyed by the cyber attackers after Blackbaud paid the undisclosed ransom.

Of the 480 customers impacted by the attack, Comparitech calculated that this included 100 US healthcare organizations and 12,328,221 patient records. 16 universities are also reported to have been affected along with numerous other organizations.

While the start of 2020 may have shown promise when it came to the low number of data breaches, hackers, like everyone, had to adapt to a wildly different year than we’d all anticipated. And the panic, uncertainty, and vast unpreparedness worked to their advantage. They exploited businesses’ vulnerabilities, employees’ lack of cybersecurity awareness, and organizations under pressure to make the second half of 2020 a “successful” year of data breaches.

And, as the pandemic continues in 2021, so too do the data breaches. As of the end of May, Notified had recorded a total of 1,019 data breaches, almost double what the figure was at this time last year (528). Perhaps more worrying was the peak of data breaches in healthcare last month with 139 in total. This is an 81 percent increase on 2020’s highest monthly figure of 77 (in September). Financial services also appear to have taken a hit in 2021, with 133 attacks to date (in 2020 they had just 30 more than this in total–163). This makes them the second-most-impacted sector for data breaches in 2021 (as it stands), replacing education which appears to have seen a decline in data breaches in Q2 of 2021.

So, with more companies and businesses moving online, it’s clear that cybersecurity is more important than ever. Businesses and the government need to prioritize cybersecurity funding to create secure systems, greater cybersecurity knowledge, and quicker adaptability to our ever-changing landscapes. Without this, personal data will remain a profitable business for cybercriminals, whether they can infiltrate systems to sell the data on the dark web or they are able to hold it to ransom.