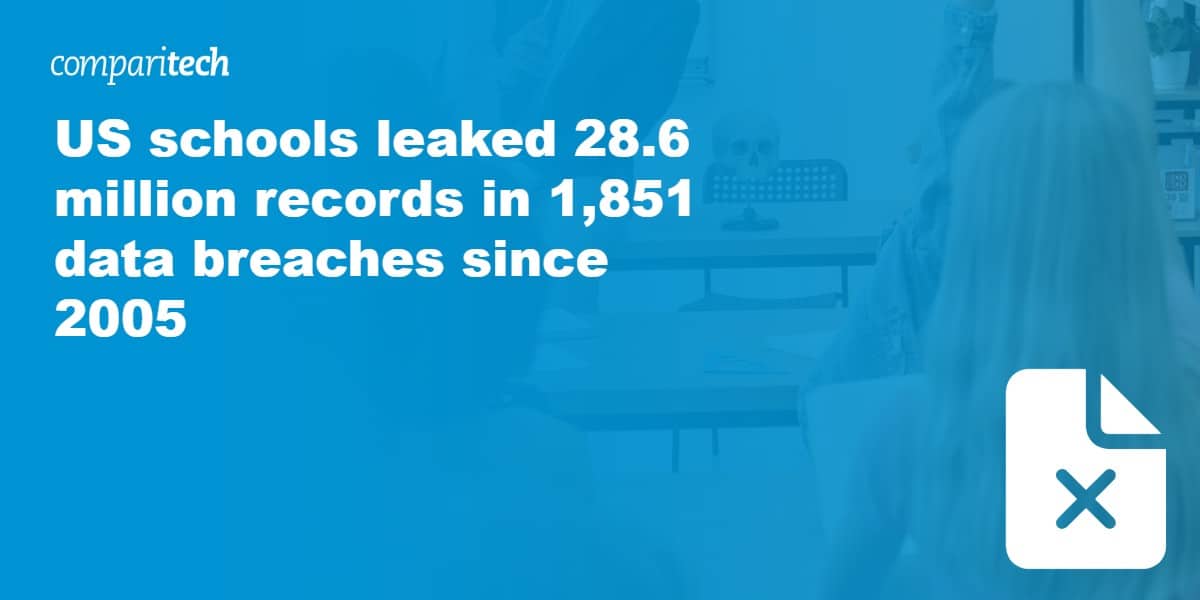 Since 2005, K–12 school districts and colleges/universities across the US have experienced over 1,850 data breaches, affecting more than 28.6 million records.

Our team of researchers analyzed data over the past 15 years to find out where the hot spots are, the biggest causes of these breaches, and how many students have been affected by each breach.

In our 2021 update, we’ve found that attacks on third parties can have a catastrophic effect on educational institutions and their data. This was particularly the case in 2020 with the widespread impact of the Blackbaud ransomware attack that affected over 200 individual educational institutions. Even without Blackbaud, 2020 was still a big year for education data breaches, despite many institutions being shut down for months at a time at the height of the pandemic.

*Most data breach notification laws, including those in Wyoming, were only implemented over the past few years. Breaches might have occurred before these regulations came into play and/or breaches may fall below the threshold required to report a breach (e.g. only breaches that affect a certain number of people require public disclosure).

In 2018, the US Department of Education strengthened its requirements for data breaches in colleges and universities. These institutions now have to report any breach, regardless of the number of records lost, but only if they’re a Title IV institution (they accept federal funding through the federal student aid program, which covers the vast majority of schools). The only schools that don’t accept federal student aid are a small minority consisting mostly of religious institutions.

If we take a look at the number of breaches by US states, we can see that California had the most by far, accounting for 239 of the 1,851 breaches (13 percent).

New York (121), Texas (98), and Massachusetts (88) are the other three worst-hit states. Florida and Illinois take joint fifth with 77 breaches each.

Wyoming remains the only state to have had no known or reported K–12 or college data breaches over the last 16 years.

Some of these numbers are not too surprising. California, Texas, and New York are among the top ten biggest US states and have large numbers of students and educational institutions. Massachusetts, however, is the 16th largest state by population and number of students in education. But with 88 breaches in total, it has had over 13 percent more breaches than Florida and Illinois.

Massachusetts is also one of the top five most heavily impacted states when it comes to the number of records affected in these breaches, too.

Predictably, California remains on the top spot for the number of records affected with over 2.9 million impacted in total. However, it is closely followed by Arizona where only slightly fewer people were affected–2.8 million in total. Both of these states’ record figures are around a million more than the other three states within the top five. Florida, Georgia, and Massachusetts have also seen around 1.8 million records impacted in educational data breaches since 2005.

Ohio, Washington, Texas, and Missouri are the only other states to have had over 1 million records impacted in these kinds of breaches.

The majority of these breached records (87 percent) were also within colleges/universities. For example, just 0.3 percent (7,986) of the records impacted within Arizona were within K-12 schools. California, Ohio, and Florida did see a higher proportion of records breached within K-12 institutions, however–22, 7, and 30 percent respectively.

Nevada had the highest number of K-12 records breached

In contrast to the above, the majority of Nevada’s impacted records (76 percent) were within K-12 institutions. Consequently, Nevada was also the state where the highest number of records within K-12 schools were breached.

A total of 717,626 records are reported to have been breached in K-12 institutions here (945,172 were breached in total). This stems from two particular breaches that impacted Washoe County (114,000) and Clark County (559,487) school districts. Both were hit by the Pearson Education, Inc. data breach which affected numerous schools across the US. A student assessment tool provided by Pearson’s AIMSweb was breached, leaving some personally-identifiable student information exposed.

Many of the breaches affecting K–12 schools impact an entire school district. It’s unclear how many schools within the district may have been impacted, however, so the breach figure remains “1.” Some community college systems also have this disambiguation issue.

North Dakota had the highest rate of students impacted

The above map demonstrates that North Dakota has the highest rate of students impacted, with over 2.3 records impacted per 1 student. While this doesn’t necessarily mean that each student has had their data breached twice, it shows that the proportion of records impacted to the number of students within the state is at its highest here.

According to our findings, there were ten breaches that have affected half a million or more records. These are:

According to the chart below, 2020 was the biggest year for education data breaches with 353 in total. This stems largely from the Blackbaud breach that affected 209 educational institutions (at least), accounting for 59 percent of the year’s breaches.

The 2020 breaches on the Metropolitan Community College of Kansas City (affecting 638,186 records) and one on the University of Maryland (affecting 309,079) contributed largely to the total.

The chart above also shows us how insider data breaches have become dominant in recent years. Insider breaches include an employee breach but also include third-party vendor breaches, e.g. Blackbaud. So, even though the third party is hacked, this is classed as an insider breach for the educational institution due to it coming from an inside entity within the school (the school itself isn’t hacked).

As well as Blackbaud’s breach in 2020, Timberline Billing Service, LLC was also breached and affected a vast number of school districts. Of these, at least 18 released data breach notifications that impacted more than 21,000 records in total.

As of September 2021, 65 individual educational data breaches reportedly affected 554,779 records. A number of reasons could explain the drastic decrease from 2020.

First, 2020 was the year of the Blackbaud data breach, which, as we’ve seen, affected at least 209 education institutions. Second, there are often delays in the reporting of data breaches, meaning figures could rise over the next few months and even into 2022 and beyond.

Furthermore, our ransomware tracking map, updated daily, shows the education sector is seeing an ongoing flurry of ransomware attacks (there have already been 50 noted attacks this year following 81 last year). As attackers continue to focus on organizations where they can cause mass disruption (e.g. Blackbaud) and hold data to ransom as part of a “double-dip” attack, it’s highly likely more breaches will be reported following these attacks. After all, the Blackbaud attack was a huge success for the hackers who received an undisclosed payout to supposedly destroy the stolen data.

To log all of the data breaches across educational institutions, our team searched through industry resources, state data breach notification tools, and news sources. Using this data, we were able to collate an extensive list of data breaches dating back to 2005.

Where possible the breach is assigned to the year in which it occurred. For example, a breach may have occurred in 2020 but may have only been disclosed in 2021. We would, therefore, allocate this to 2020’s figures as this is when the breach happened.

Some of the records included may be of employees at the facility. This is due to there being no breakdown between students and employees affected.

A vast number of the school-related breaches affected an entire school district, rather than a single school. However, as it is often unclear exactly how many schools within the district have been affected, the breach is classed as a single one.

While all 50 states (and the District of Columbia) now have data breach notification laws, these may not have been in place during each year of our study. Therefore, there may be some breaches that were not reported prior to 2018.