Which is the better VPN for most people: ExpressVPN or CyberGhost? Today, we’ll be pitting these two high-quality services against each other to find out how well each performs. By doing so, we’ll be able to fairly and comprehensively compare ExpressVPN and CyberGhost.

CyberGhost is the most inexpensive choice for long-term protection: its two-year subscription ($88.56) is almost the same price as ExpressVPN’s one-year plan. However, while it’s less expensive in the long run, it only offers one plan under a year long, so you need to be ready to commit to get the big discounts.

EXPRESSVPN DEAL: Get a 49% discount and three months free.

CYBERGHOST DEAL: Save over 70% on the 3 year deal.

ExpressVPN has exceptional multi-platform support, with apps for all the major operating systems, including Linux. It even offers apps for Amazon Fire devices and selected routers. In contrast, while CyberGhost has apps for the major platforms, it requires manual installation on a wider range of devices. CyberGhost works better as an all-in-one solution for less tech-savvy users, though. It includes automatic malware scanning and ad-blocking features designed to make staying safe online as simple as possible.

ExpressVPN caters to a more knowledgeable user base, with split tunneling functionality (the ability to only encrypt traffic from specific applications) built into its desktop apps. It also offers extensions for some of the most popular web browsers. These serve as an easy-access control hub for the main app, and automatically change your browser’s geo-location settings to match your current server. Also included is the ExpressVPN Media Streamer app: this is a Smart DNS proxy which bypasses geo-locking without encrypting your traffic, allowing you to compromise between speed and security as needed.

Both ExpressVPN and CyberGhost are capable of unblocking a wide range of streaming platforms. In fact, CyberGhost offers one-click unblocking for numerous platforms including Netflix, BBC iPlayer, and Amazon Prime Video — three services most low-cost VPNs struggle with. It’s worth noting that the table above doesn’t list every geo-restricted platform these VPNs can unblock; there are hundreds more.

ExpressVPN is capable of bypassing China’s Great Firewall. The government has blocked the service’s homepage, however, which means you’ll have to register on an alternative site. At the time of writing, get-express-vpn.com is still accessible from within China, although this may change as the country’s firewall is updated.

CyberGhost customer support was very open about the fact that their service rarely works in China. The website itself is blocked, and allegedly, local Internet Service Providers (ISPs) have also begun restricting access to the service. With no official mirror available, and no guarantee that CyberGhost will work anyway, we don’t recommend it when in China.

CyberGhost and ExpressVPN work as well on small screens as they do on desktop computers. Their respective mobile apps are easy to use and allow users to connect to the VPN with just one tap. CyberGhost even gives users additional information about servers before they connect. This includes, for instance, their current load and whether they’re intended for file-sharing. 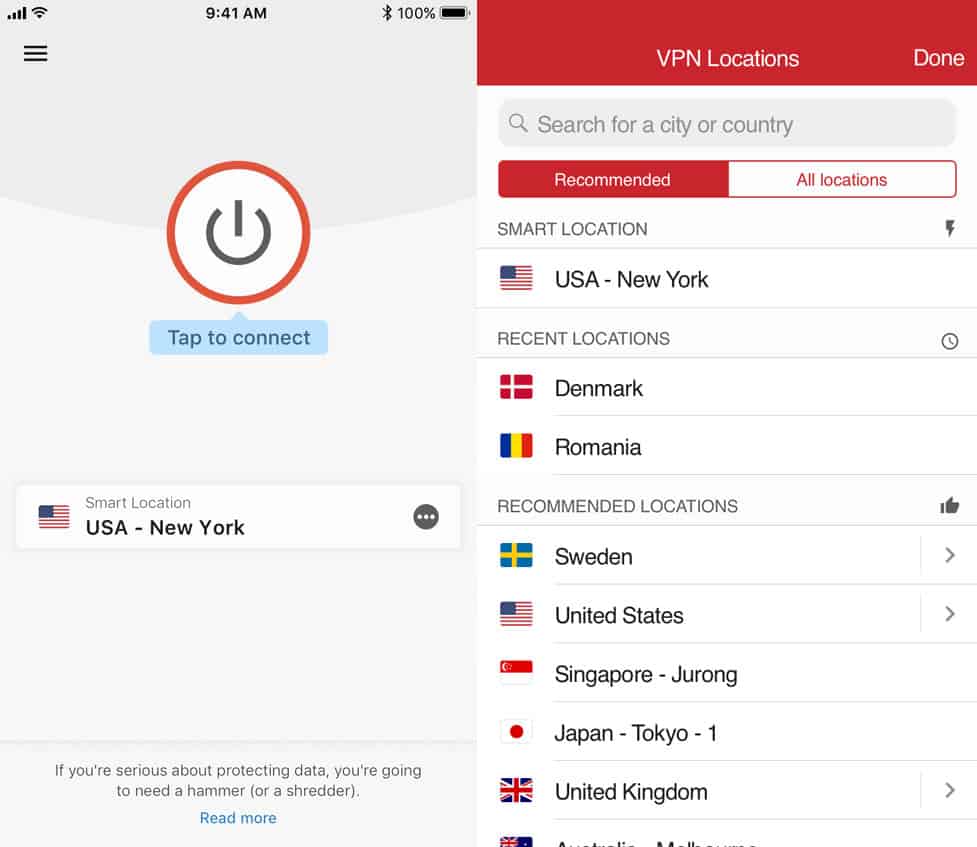 Instead of the tile-based interface used by the desktop app, CyberGhost uses a simple sliding panel to distinguish between servers intended for streaming anonymously and bypassing geo-restriction. It offers a stripped-down selection of options, however: users can only choose to automatically start the VPN when connected to a wireless network, block ads, or compress website content to lower costs when using mobile data. 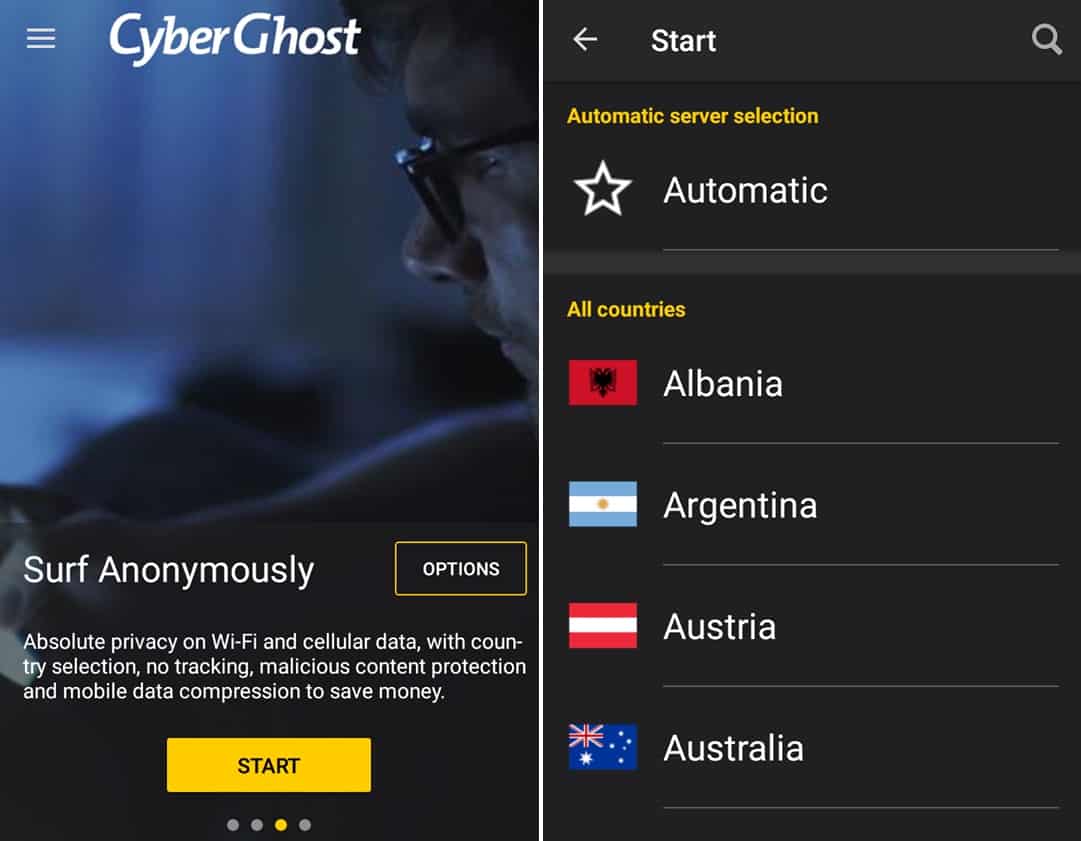 This isn’t unusual. Even ExpressVPN’s mobile app only offers a handful of options compared to the desktop version. In the desktop app, users can change protocol, set up split tunneling, or tell the app to start on boot. CyberGhost has a similar set of options, but also allows users to set exceptions or configure a proxy.

ExpressVPN has servers in more countries than most of its rivals, including CyberGhost. However, CyberGhost has more servers overall. ExpressVPN often has a single server for a given location, whereas CyberGhost has clusters, even in less commonly-requested places like Eastern Europe. This is likely due to their headquarters in Romania, but even in high-traffic regions like the US or Canada, CyberGhost’s servers outnumber ExpressVPN’s ten-to-one or more. 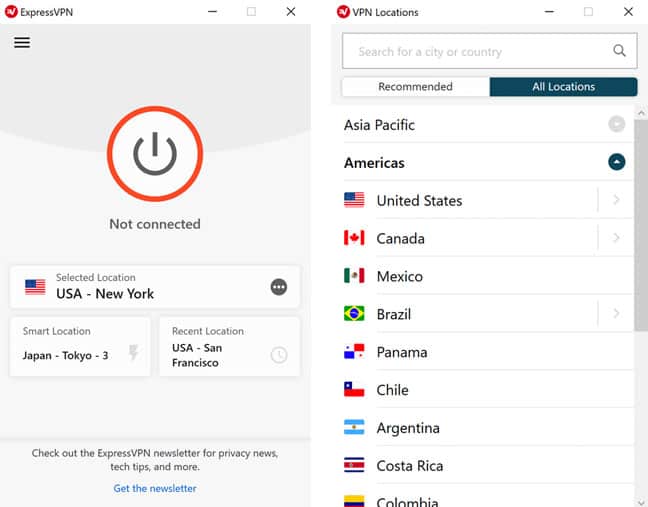 Users can choose not only their country, but in many cases, also the city they’d like a server in. Admittedly, there are often only a few cities to choose from in each region, but this allows you to bypass area-specific blackouts, like those used by the local TV stations and the NHL. 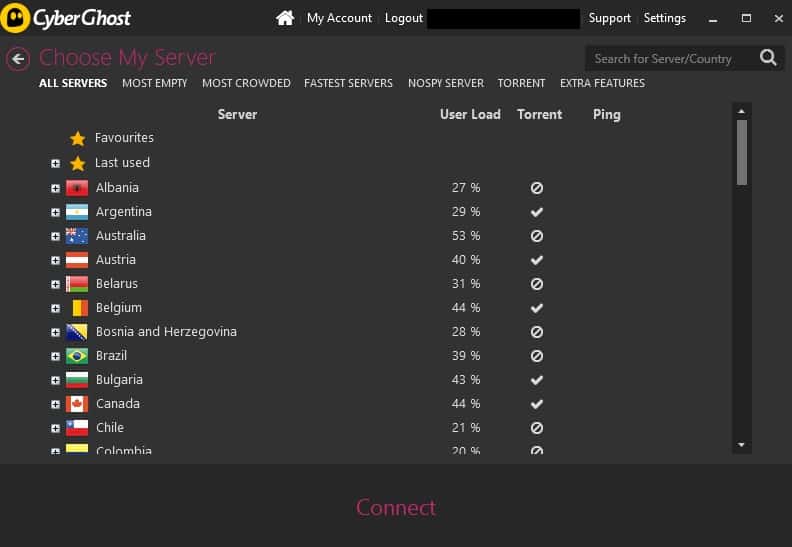 Take a look at the table below to compare ExpressVPN and CyberGhost’s server availability by country:

Both CyberGhost and ExpressVPN allow the use of the OpenVPN and L2TP protocols, but they each offer something the other doesn’t. In ExpressVPN’s case, this is the PPTP protocol, which offers higher speeds at the cost of security. CyberGhost, on the other hand, offers IKEv2, a fast and secure protocol suitable for use on many mobile devices. 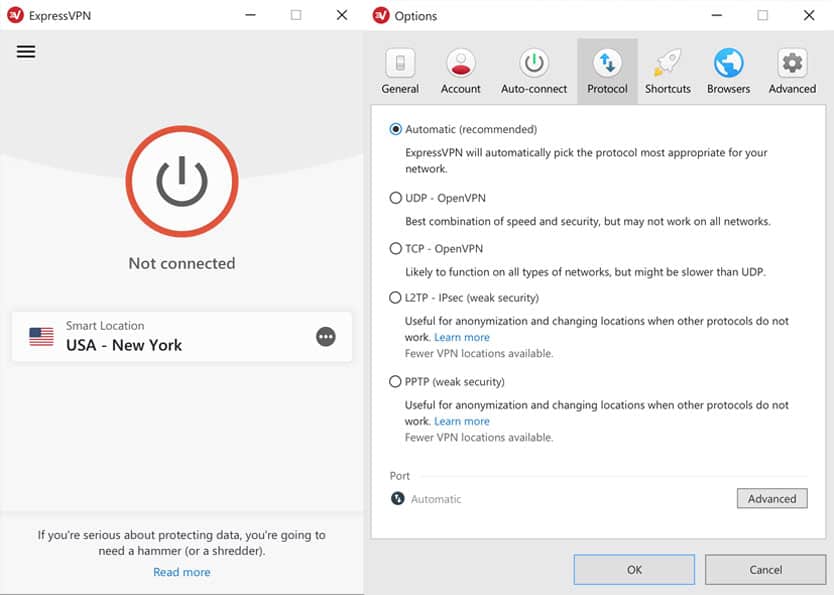 These services both utilize 256-bit AES encryption and 4096-bit RSA keys to keep your traffic private. ExpressVPN also uses cipher block chaining to help obscure the fact that you’re connected to a VPN; this will be especially helpful if you’re in a country with strict VPN usage restrictions. 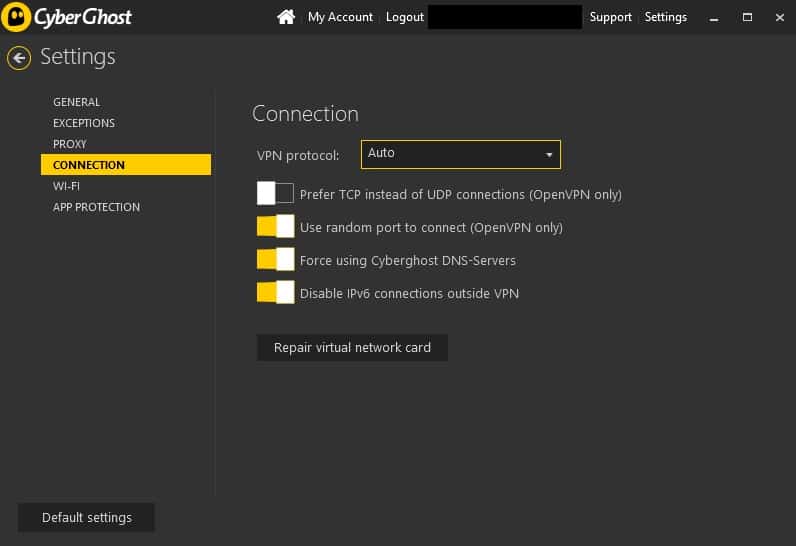 CyberGhost doesn’t offer any such cloaking mechanism, but it can be configured to automatically turn itself on when you connect to a wireless network. Also, it has a kill switch built into both its desktop and mobile apps. You might notice that there’s no way to turn the kill switch off: this is by design and ensures you never browse or stream unprotected. While ExpressVPN also includes a kill switch, it’s only available in the desktop versions of the app.

Neither of these VPNs is based inside a 5 Eyes country, which means that they are under no obligation to comply with requests for data from the UK, US, Australia, Canada, or New Zealand governments. ExpressVPN operates out of the British Virgin Islands, a location with no mandatory data retention laws, and CyberGhost is based in Romania, part of the European Union. In 2016, the EU deemed bulk electronic data retention illegal, except in cases where public safety is at risk. As both VPNs allow anonymous registration and don’t keep traffic logs, your activities cannot be traced back to you.

That’s not to say these companies don’t keep any logs, however. ExpressVPN, for instance, records the server you use, the date (but not time) you connect, and the data volume transferred. It does not log your real IP address, the sites you visit, or what you do on a particular site. Further, with the ability to pay via Bitcoin or Mint, it’s entirely possible to sign up and browse anonymously.

CyberGhost also keeps some connection logs. Once a day, it checks to see if you’ve logged in. This is for statistical purposes, and all record of your logins is deleted at the end of the month. Again, this service does not log the sites you visit, connection times or duration, your activities on a webpage, or source IP address. While it only offers a single anonymous payment option, it’s still absolutely possible to register and use the internet safely without giving up any personally identifiable information.

Both of these VPNs use shared address allocation, meaning every user who connects to a specific server at the same time is given the same IP address. This helps obfuscate your activities, effectively making it impossible to tell one user’s activities from another. It’s not possible to obtain a static IP address on either service, however.

While neither service has specific anti-DDoS servers, they do provide some level of protection. When using a VPN, your real IP address is hidden. This means that if you are attacked, it will actually be the VPN server that is flooded with requests. Companies are naturally reluctant to go into detail as to how they prevent these issues. That said, CyberGhost’s customer support revealed that if a DDoS attack is detected, the server simply switches IP address. This might result in a few seconds of downtime, after which you’ll be able to resume whatever you were doing.

Each of these services includes a NAT firewall. Your router already has one installed, but as your VPN traffic is encrypted, the router’s firewall can’t tell which device specific packets are intended for. This is where the VPN’s firewall comes in; it decrypts the packets, sends them to the relevant device, and discards any that seem suspicious. It’s important to note that while these filter out a large percentage of unsolicited traffic, it’s not foolproof. That’s why NAT firewalls work best when paired with a secondary, OS-level firewall.

CyberGhost and ExpressVPN both offer live chat functionality. We tested this at various different times of day and found that in almost every case, we received a response within seconds. Each also offers email and ticket-based support systems for less time-critical problems. ExpressVPN has a selection of video tutorials in its knowledge base, whereas CyberGhost’s use screenshots instead. There is a small selection of video walkthroughs on CyberGhost’s YouTube channel, however, these were uploaded years ago and may no longer be relevant.

We tested the response time of each service by asking three questions via email. Two of these are common enquiries which the support teams will most likely have pre-written answers for. The third, however, is intentionally a little vaguer and is intended to provoke a more detailed response.

ExpressVPN takes significantly less time to respond to emails than CyberGhost does. Initial responses arrived in less than an hour for each of our three enquiries. Its answers were usually in-depth enough to address the issue at hand, but not so detailed that an average person would be overwhelmed.

CyberGhost, on the other hand, regularly took several hours to reply. However, these replies included extensive background on the issues we were asking about, particularly regarding logging and encryption. This VPN didn’t even flinch at our more difficult question, instead,  providing a step-by-step guide to optimizing their service (and the user’s system) for a better experience. 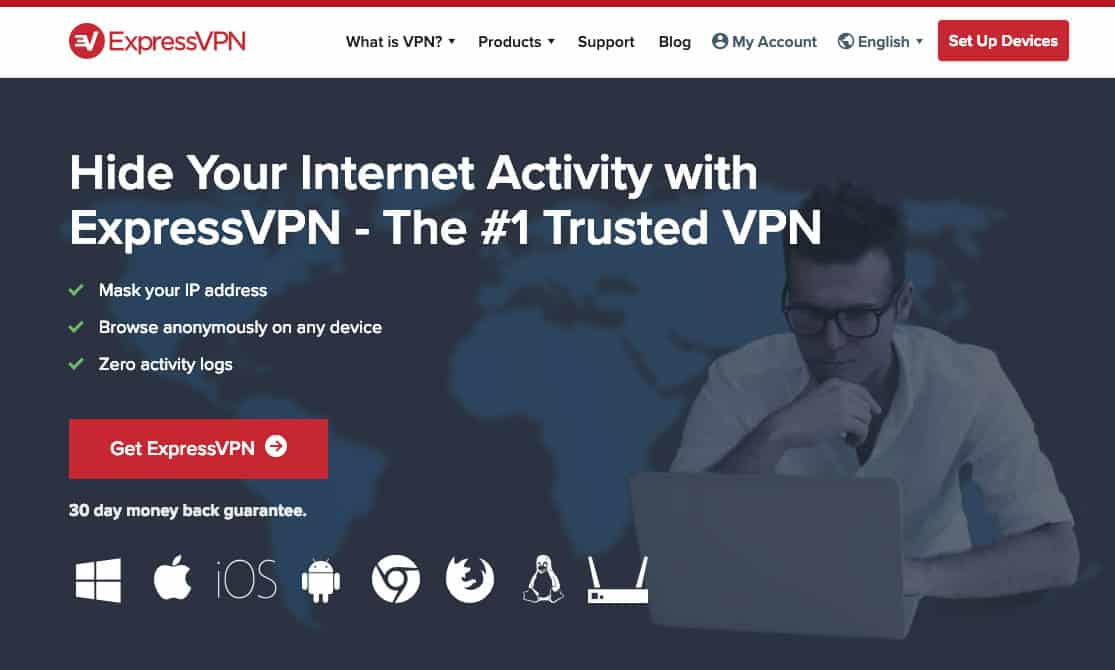 While ExpressVPN and CyberGhost are both exceptional VPNs, we believe ExpressVPN is the better choice for the average user.

With servers in almost twice as many countries as CyberGhost, it permits streaming from a wider range of geo-blocked services. Additionally, ExpressVPN can be used somewhat reliably from inside China, increasing its usability even further.

ExpressVPN’s ease of use is another deciding factor. You can quickly install it on your home router thanks to this service’s custom firmware, removing the need to manually configure each device. This helps offset the service’s low number of simultaneous connections — its only real weakness. Even if you run into difficulty, ExpressVPN allows you to get help at a moment’s notice. Its customer support staff are quick to reply and knowledgeable about the service. With video walkthroughs for the most common tasks, ExpressVPN makes it easy to protect yourself online, and even easier to get started.