ExpressVPN and IPVanish are both exceptional providers, but which is better for the average user? To find out, we examined both VPN services and compared their performance in several areas. This allowed us to accurately and fairly weigh the advantages of one against the other. Let’s take a look at ExpressVPN vs. IPVanish:

If you’re looking for short-term VPN coverage, IPVanish is the less expensive option. ExpressVPN closes the gap over longer periods, however, and both services have a very similar lowest price. On the other hand, ExpressVPN offers a 30-day money-back guarantee, giving you a whole month to test the service and see if it meets your expectations. On the plus side, both VPNs allow you to cancel within their respective trial periods and receive a full refund.

EXPRESSVPN DEAL: Reduce the price by 49% and get an extra 3 months free with ExpressVPN’s one-year deal.

IPVANISH DEAL: Save up to 60% on your IPVanish subscription.

ExpressVPN just about wins out in this category. IPVanish allows double the number of simultaneous connections ExpressVPN does, so may be suitable for families, but it has to be manually installed on a wider range of devices. Admittedly, there are IPVanish apps available for the most popular platforms, but ExpressVPN takes it one step further with an automatic command-line based Linux installer and custom router firmware. It’s worth noting that in both cases, a router counts as just one connection, but will automatically encrypt the traffic of any device connected to it.

Unlike most VPN browser extensions, ExpressVPN’s don’t work by themselves. Instead, they serve as a way to quickly switch servers without opening the actual application. They do, however, automatically adjust your browser’s geo-location settings in line with whichever server you choose. ExpressVPN also includes its Media Streamer app – a Smart DNS proxy that bypasses geo-restriction without encrypting your traffic. While this isn’t ideal for general browsing, it does allow you to strike a balance between security and speed.

Neither service allows for split tunneling across all of your devices: ExpressVPN restricts it to its desktop apps, while IPVanish only has this feature in its Android app. This can cause problems when multitasking; for instance, without split tunneling, users might run into trouble when attempting to access foreign geo-locked streaming sites while also downloading app updates from a source based in their own country.

While IPVanish is capable of unblocking a wide variety of streaming services, it struggles to beat the aggressive geo-restriction measures employed by larger platforms like the BBC iPlayer and Netflix. ExpressVPN, on the other hand, can unblock nearly any major streaming service, and of the ones tested, only failed to access ABC.

ExpressVPN works in China, although the service’s main website is blocked by the Great Firewall. As such, you’ll have to sign up from a different site; currently, get-express-vpn.com is still accessible from within China. Occasionally, there are outages due to new Chinese firewall updates, but this service is usually back online shortly after.

IPVanish freely admits that its service doesn’t work in China, although it provides connection guides for customers willing to try anyway. However, as IPVanish’s IP addresses have started being blacklisted by the Chinese government, the odds of getting a working connection are very slim.

Both the IPVanish and ExpressVPN apps work well on both large and smaller screens. They’re both very clean, with a one-click connection and minimal clutter. IPVanish excels in this area as it allows users to select their preferred region and server right on the app’s main screen. ExpressVPN isn’t much more difficult, with server switching only taking a single additional tap. 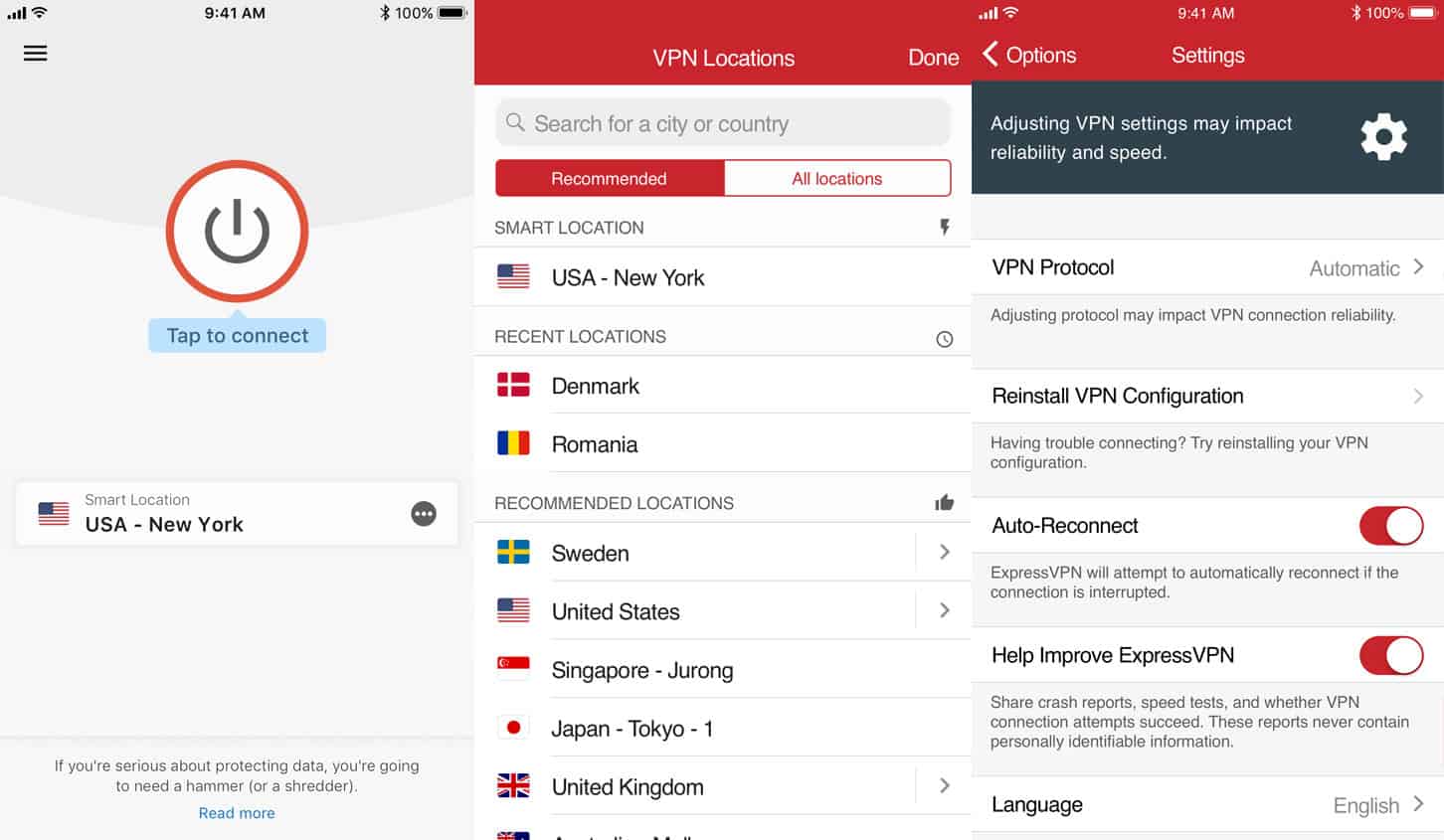 IPVanish provides far more security options for mobile devices though. Users can choose to scramble OpenVPN traffic, block LAN access, use split tunneling, and change protocols. By comparison, ExpressVPN’s barebones automatic reconnection and protocol choice options seem a little underwhelming. It does include a Smart Location feature, however, which automatically connects to the fastest server available. 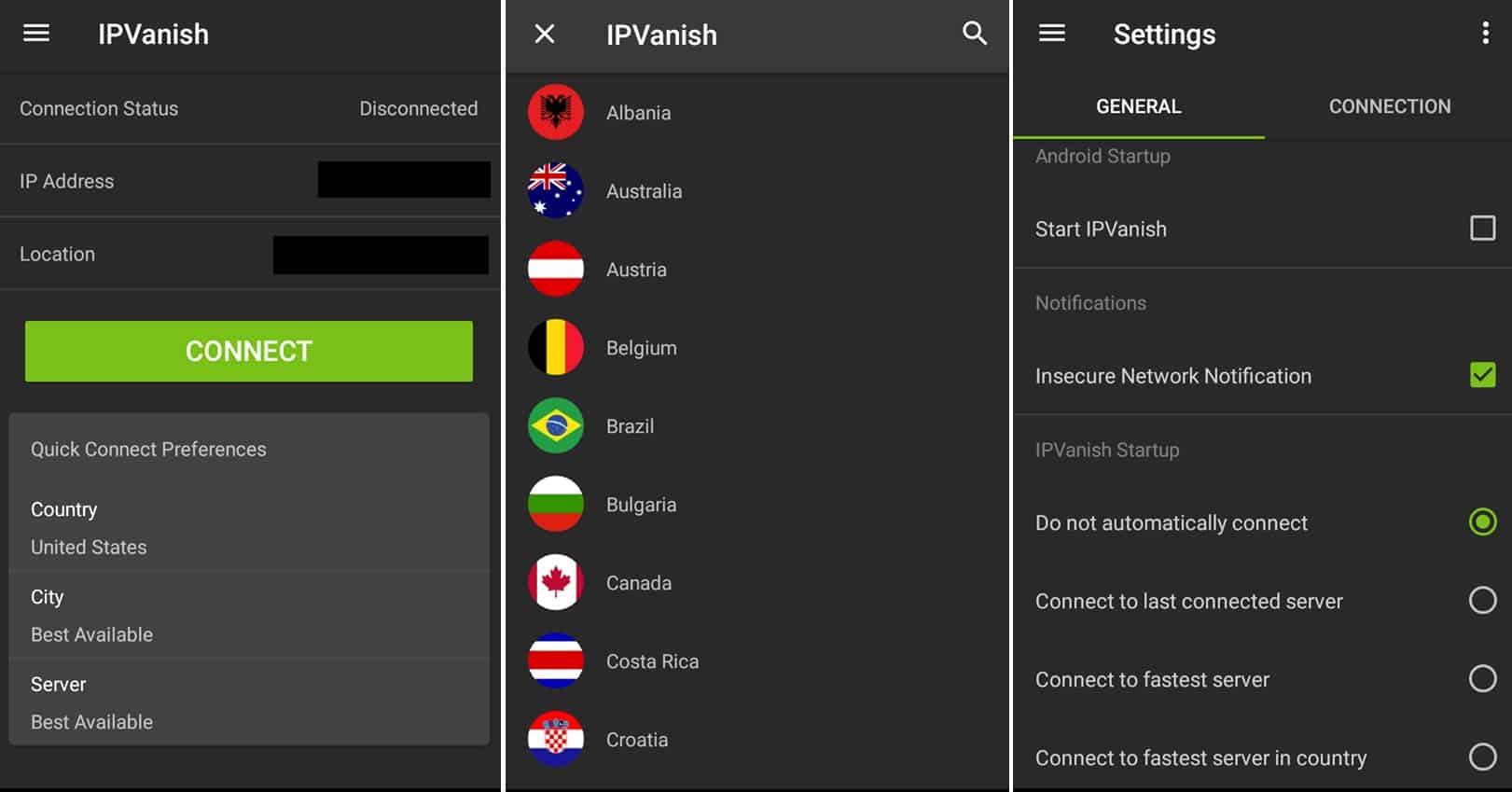 Of course, the desktop apps offer a much wider range of functionality. For instance, ExpressVPN allows you to use split tunneling and its kill switch to protect yourself when on a desktop computer. IPVanish’s desktop app allows you to switch IP addresses at predetermined intervals or configure third-party DNS.

ExpressVPN beats IPVanish handily here, with servers in almost double the number of countries. Also, ExpressVPN has twice as many servers, making a low-latency connection more likely. The two services have competing network principles: ExpressVPN has fewer servers in each location, but broader coverage, whereas IPVanish has server clusters in high-demand areas like Brazil, the US, and the UK. 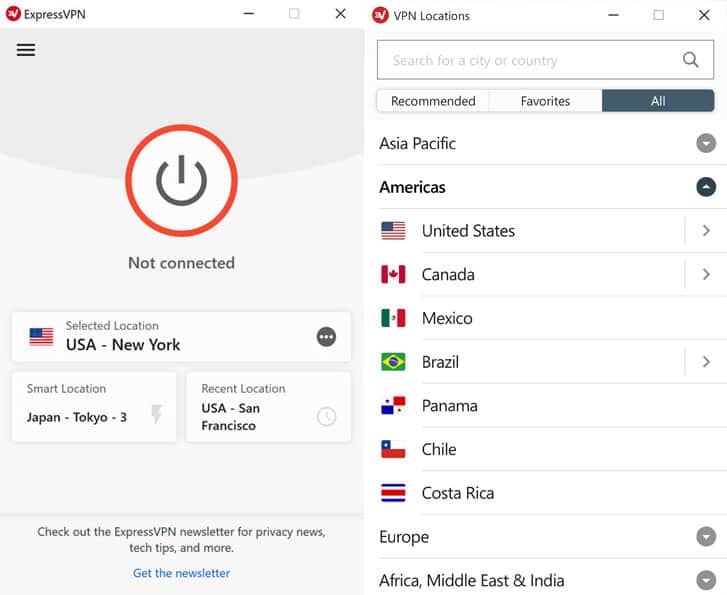 Both VPNs allow users to select not just a country, but also a specific city for the server they’d like to connect to. This is particularly useful for bypassing regional blackouts like those used by the NHL or accessing local TV streams online. 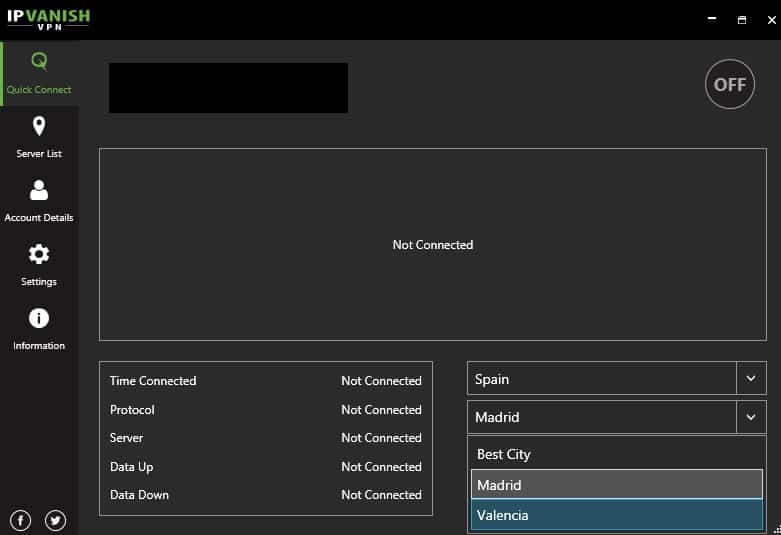 Below, we’ve listed the countries in which ExpressVPN and IPVanish have servers:

Both of these VPNs can use the OpenVPN, L2TP, and PPTP protocols, but only ExpressVPN supports SSTP. This allows you to bypass firewalls which are configured to block the more commonly used VPN protocols. 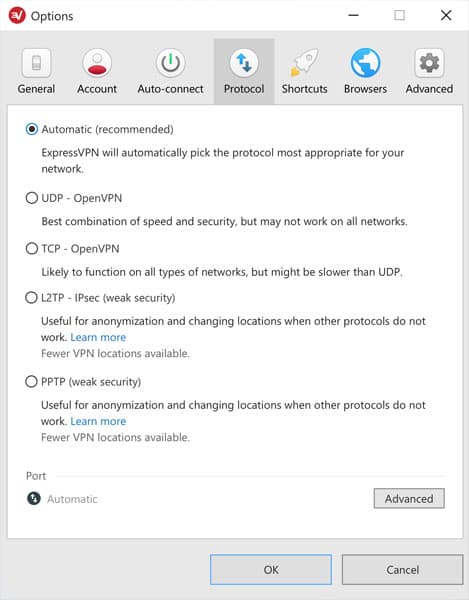 Both providers use the same 256-bit AES encryption and SHA512 hash, but ExpressVPN uses 4,096-bit RSA keys whereas IPVanish uses 2,048-bit. Additionally, ExpressVPN uses cipher block chaining to help mask the fact that you’re using a VPN at all. This is particularly useful if you’re in a place like the United Arab Emirates, where VPN use is restricted. IPVanish boasts the ability to scramble your OpenVPN traffic. Obviously this won’t help if you’re using one of the other protocols, though. 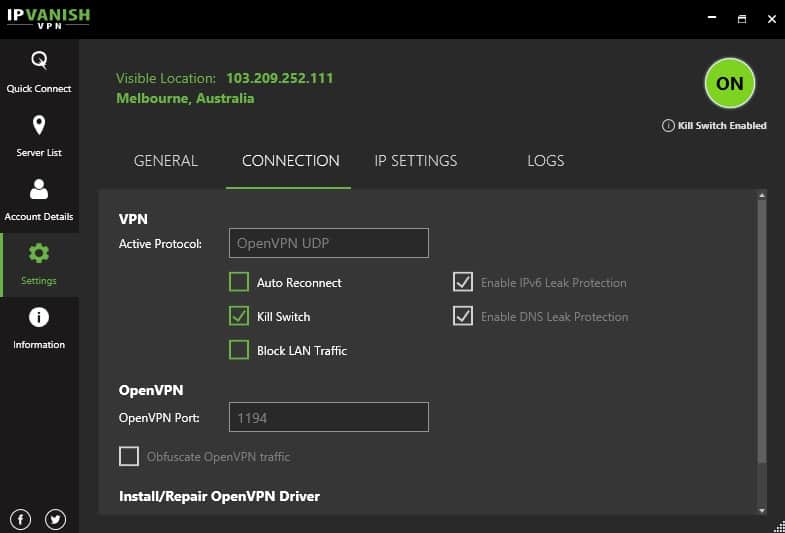 ExpessVPN and IPVanish each include a kill switch, but only in their desktop apps. This means that if you’re browsing on a cell phone or tablet and your connection to the VPN drops, you could find yourself accidentally sharing information you hadn’t planned to.

ExpressVPN is based in the British Virgin Islands, a location with no mandatory data-retention laws. IPVanish, however, is based in the US — one of the Fives Eyes countries. In practice, this means that governments in the US, the UK, Canada, Australia, or New Zealand could gather intelligence about each other’s citizens and share it with one another. However, this shouldn’t matter if a VPN provider has a solid no-logs policy.

ExpressVPN logs the date a user connects to the service, the amount of data transferred, and the VPN server connected to, but no timestamps or real IP addresses. However, ExpressVPN allows you to sign up anonymously using a throwaway email address and cryptocurrency payments.

IPVanish has claimed for years to be a “zero-logs” service, but this was recently thrown into doubt. After an information request from Homeland Security, IPVanish provided details of a suspect’s email address, account status, source IP address, and dates/times when said user connected. In its defense, IPVanish currently under different ownership and stands by its existing log-free policy. There is, however, no way to sign up anonymously for this service.

These VPNs have very similar configurations: both used shared address allocation and a NAT firewall, and neither offers static IP addresses or any kind of Distributed Denial of Service (DDoS) protection. Let’s break down what exactly this means for the user.

In shared address allocation systems, every user who connects to a particular server at the same time shares the same IP address. There’s no way to tell one users’ activities from another, even if connection logs are requested for a particular IP address on a specific date.

NAT firewalls are designed to block unsolicited incoming traffic. Your home router uses one to direct traffic to the device which requested it, but as VPN traffic is encrypted, your router can’t see which device these packets are intended for. This is where your VPN’s NAT firewall comes in; it can decrypt the packet headers, get the relevant IP address, and send your traffic where it’s needed. NAT firewalls also discard traffic which seems odd in any way. This isn’t a failsafe system, however. NAT firewalls work best when coupled with an additional firewall, like the one built into most major operating systems.

Neither of these services offers specific anti-DDoS servers. That said, you can hide your real IP address simply by connecting to a VPN. This means that anyone trying to flood your network with requests will actually be targeting the VPN’s network instead. Most major VPNs are large enough to handle this without any issues.

ExpressVPN offers users greater flexibility in how they contact support, with live chat typically responding in seconds. Plus there’s an extensive knowledge base which addresses some of the most commonly asked questions. You can contact the IPVanish customer support team by email. There are also in-depth tutorials, as well as a selection of video walkthroughs.

To test each service’s response time, we emailed them both three questions. Two of these were pretty straightforward, and the companies likely had prepared responses for them. The third question in each case was a little more difficult, and would require a more detailed answer.

ExpressVPN not only offered knowledgeable answers to our questions, they actually provided more detail than was necessary. IPVanish was a lot slower, but still provided enough information to answer the question. 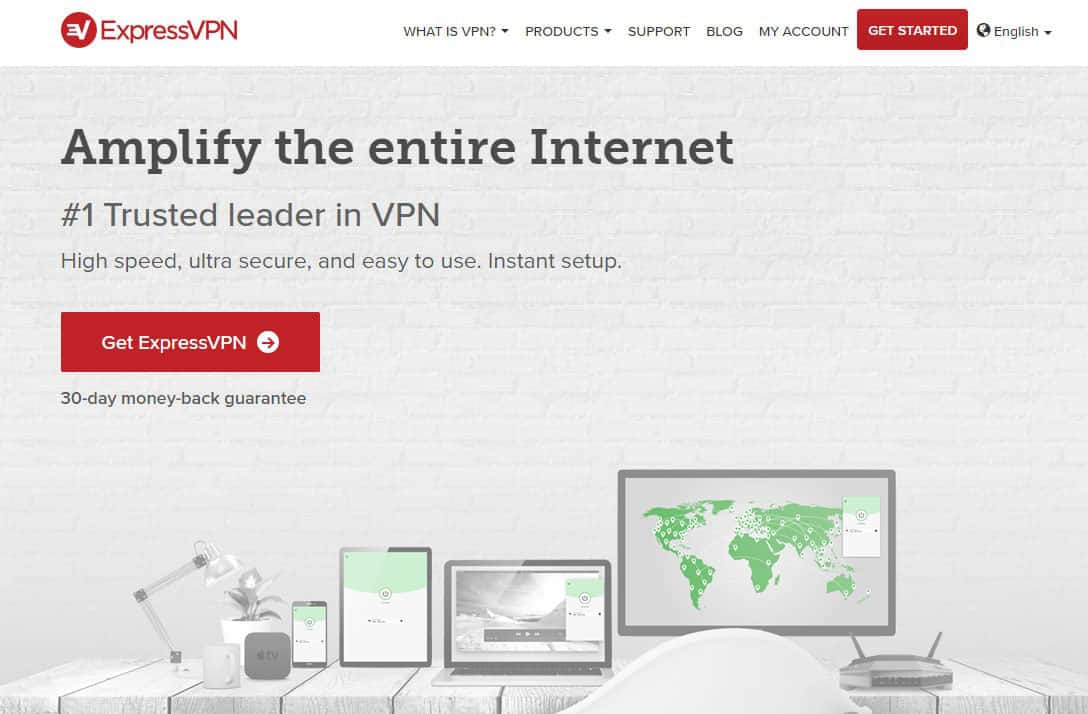 Let’s preface this by saying that both ExpressVPN and IPVanish are high-quality services. If you’re looking for an inexpensive, general-purpose VPN to install onto a wide variety of devices, IPVanish would be a strong choice. However, in a one-on-one showdown, ExpressVPN manages to edge the win.

Although this VPN has fewer servers in each area, its network covers a huge portion of the world and enables users to stream content from countries most other VPNs don’t. When you consider that it can unblock several of the most popular streaming platforms and even works somewhat reliably in China, ExpressVPN becomes the obvious choice for expats and frequent travellers.

ExpressVPN allows you to trial their service for longer. This gives you the chance to test it out on your usual streaming platforms and weigh up whether it’s right for you. There’s no risk whatsoever, and you can always claim a refund if you’d rather not subscribe after the trial ends.

Even if you run into problems, you don’t have to worry as ExpressVPN also has a far superior customer support system. For example, it can take hours to hear back from IPVanish support, but you’ll find that the ExpressVPN team respond via live chat just seconds after your question was asked. These characteristics make ExpressVPN the better choice for most people, but particularly novice users.