How to get an IP address for Iraq

Are you looking to acquire an IP address from Iraq to help you access geo-restricted content or login to your Iraqi bank account? In this article, we’ll show you exactly how to get an IP address from Iraq using a Virtual Private Network (VPN) and reveal the best one for the job.
Osman Husain Tech journalist, VPN and streaming expert 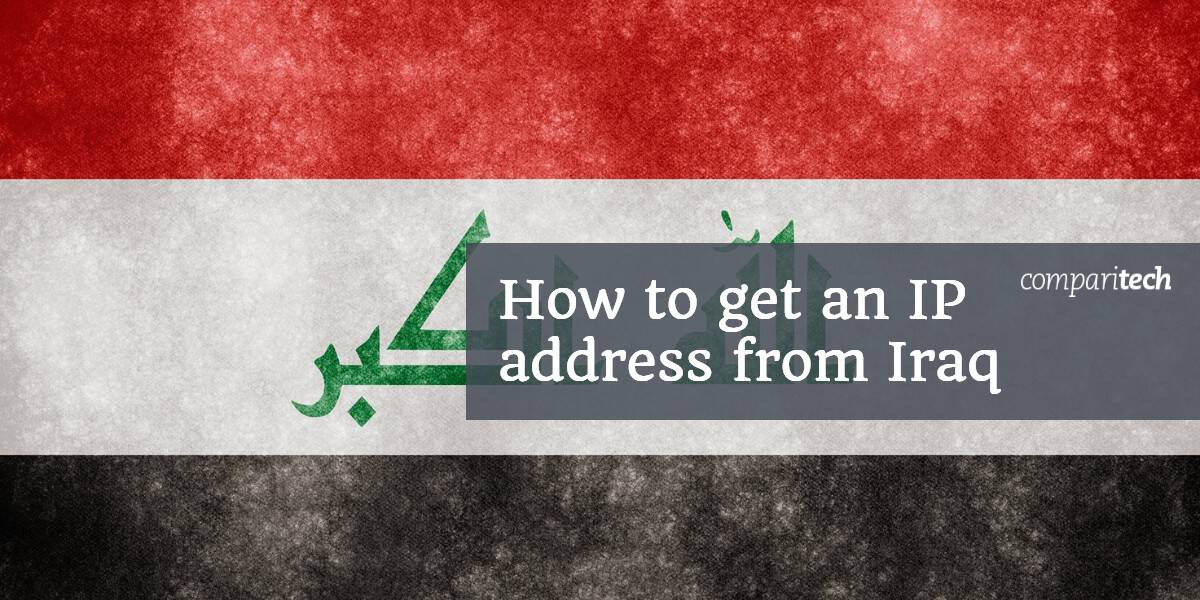 Iraqi streaming sites such as Baghdad TV, Nawa TV, Afaq TV, and WAAR TV usually only allow people armed with a local IP address to view their live streams. What this means is if you try to view the content with a non-Iraqi IP address, you’ll be blocked from proceeding further.

In a similar vein, an IP address from Iraq will also help you access online bank accounts from the Trade Bank of Iraq, Baghdad Bank, and the Commercial Bank of Iraq. That’s because a non-local IP address has the potential to cause fraud alerts within the bank’s network infrastructure.

A Virtual Private Network (VPN) can help. It encrypts all traffic flowing to and from your device and routes it via an intermediary server. If you connect to a VPN server in Iraq, your actual IP address will be replaced with an Iraqi one, spoofing your location. Host websites and apps will assume you’re physically located in Iraq. As a bonus, the encryption component makes your connection virtually impenetrable and safe from hacking or snooping attempts.

We explain how to get an IP address from Iraq and the best VPN for the job.

How to get an IP address from Iraq

Very few VPNs have servers in Iraq, but one reputable service that does offer Iraqi IP addresses is HideMyAss.

Getting started with a VPN is simple. Here’s how to get an Iraqi IP address:

TIP: WANT TO GET AN IRAQI IP ADDRESS FOR FREE? If you’re in the market for an IP address from Iraq for a month or less, we recommend you take advantage of HideMyAss’ 30-day money-back guarantee. Yes, an initial payment is required but this will be refunded as long as you initiate the request within the first 30 days. It’s a risk-free option.

What’s the best VPN to acquire an Iraqi IP address?

You’ll come across dozens of VPN services after just a cursory search on the internet. However, that doesn’t mean all of them are in a position to offer you an Iraqi IP address. Many don’t operate servers in Iraq and you’ll want a provider that has top-notch services, a stable connection, and fast speeds.

Our recommendation of the best VPN for an Iraqi IP address is based on the following factors:

Here’s the best and most suitable VPN to get an IP address from Iraq:

HideMyAss operates 930 servers in 190 countries including two servers in Iraq. Note that some locations, including Iraq, are covered by virtual servers. This provider is well-known among VPN enthusiasts because it’s been in the business for several years. In fact, one of its claims to fame is that it boasts 400 million users across its free and paid versions.

This provider allows users to choose servers dedicated to specific use cases such as accessing streaming sites or engaging in P2P filesharing (read: torrenting). It’s fast, stable, secure, and is able to unblock several geo-restricted sites such as Netflix, Hulu, and BBC iPlayer.

While this provider does log connection data (including IP addresses) by default, you can switch off logging by adjusting the setting in the app. Users can also take advantage of the IP address shuffle feature found in the network security screen. This switches your IP address for a different one at regular intervals.

You can find apps for Windows, MacOS, Android, and iOS. A single connection allows for five devices to connect at the same time and there’s 24/7 live chat support.

BEST VPN FOR AN IRAQI IP ADDRESS:HideMyAss is fast, secure, and offers servers in Iraq. It works with many streaming services and has fast speeds and top-tier encryption. All plans ship with a 30-day money-back guarantee.

Read our full review of HideMyAss.

Why is there only one recommended VPN for an Iraqi IP address?

The fact of the matter is that top-tier VPN providers shy away from offering servers in Iraq. This could be due to the fact that the country’s internet landscape is restricted and monitored, with netizens not given fundamental rights to access the unfettered web.

While it’s impossible to state the reasons why VPN providers shy away from Iraq, it’s very likely that they don’t want to attract the wrath of state authorities.

What about free VPNs? Are they a viable option?

Free VPNs are attractive at first glance because they offer a simple, plug-and-play solution, but they have several disadvantages when compared to paid options. For example, free VPNs won’t offer unlimited bandwidth the way paid providers do. Plus, they usually take on far more users than their servers can support. This results in wait times, network congestion, and a severely limited choice of server options. What’s more, very few paid providers offer Iraqi servers and it’s even more unlikely you’ll find a free VPN that does.

Free VPNs don’t put a premium on user privacy and anonymity. Some free VPN providers have been caught mining user data and selling it to third-party advertisers in order to earn cash. One egregious provider actually piggybacked on idle bandwidth to build botnet armies and attack rival sites. To make things worse, a 2016 survey of free VPN apps found that over one-third contained malware of some kind.

It’s simply not worth it to take on these possible privacy risks just to save a few dollars.

Can I use a VPN to watch Iraqi television?

Connecting to HideMyAss, choosing a server in Iraq, and browsing the web from there on will make it appear as if you’re physically located in Iraq. This means online television streams such as those from local channels Baghdad TV, Nawa TV, Afaq TV, and WAAR TV should be accessible without any problems.

Note that some channels may ask you to sign up in order to obtain a username and password before granting total access. This may involve providing a local address. Check with individual sites if you’re unsure of what to do next.

What’s the current state of internet freedom in Iraq?

We mentioned before how Iraq is sliding towards internet authoritarianism by adopting draconian methods of surveillance. The draft information technology crimes law — also known as the cybercrimes law — has been criticized for blocking freedom of expression in the country.

While the law hasn’t officially been passed yet, its current terminology says the violation of any ‘religious, moral, family, or social principles or values’ would be punishable by one year in prison while ‘harming the reputation of the country online’ could carry a life sentence. That’s highly troubling, especially when you consider how vague the terminology is and how easily it can be twisted around to suit state oppression.

Advocacy body Freedom House adds that Iraq is ‘not-free’ pointing to the lack of an independent media and regular flouting of human rights laws as an indicator that these principles aren’t taken very seriously. In fact, the constitution itself allows for the muzzling of the media and free speech in order to safeguard public order and morality.

Restrictions on the internet have taken place to quell political and social turmoil. In July 2018, the Iraqi government shut down the internet in parts of the country and restricted access to WhatsApp, Twitter, and Facebook to prevent online criticism and calls for protest. It’s possible that this may happen again, and in that case, a VPN can enable you to use your favorite services as normal.

If you’re looking to blog in Iraq, then you may want to read our guide on how to blog anonymously.

What else can I do with an IP address from Iraq?

We’ve gone into some detail about how a VPN-enabled IP address will help you unlock geo-restrictions on streaming sites such as Netflix and Hulu. Another common reason people sign up for a VPN is that it enables them to access their online bank accounts safely and securely.

An IP address from Iraq will come in handy for local residents living or traveling abroad as they seek to engage in money transfers from the Trade Bank of Iraq, Baghdad Bank, and the Commercial Bank of Iraq, and more. For example, if you’re in Dubai but logging on while connected to HideMyAss’ Iraq server, then your bank’s fraud detection algorithms won’t notice anything amiss. This means your account will operate as normal without any need to input more passwords or speak with a customer support agent.

Plus, the encryption features embedded into HideMyAss makes it a worry-free experience when accessing public wifi. These wifi networks are typically found at airports, hotels, malls, and cafes. Hackers and other nefarious entities that want to steal your data are attracted to such hotspots as they’re aware hundreds of users are connected to them at any given point in time. They could also be relatively insecure in terms of internal risk controls, so it’s a good idea to use a VPN first.

Is a VPN my only option? How else can I get an IP address from Iraq?

VPNs are by far the easiest, quickest, and most efficient way of getting an IP address from Iraq. But if you want to know an exhaustive list of options, then there are a couple of other methods. However, these are onerous options and won’t give you the same ease of use and experience that a VPN will.

The Tor browser is one alternative to a VPN. This has the capability of obfuscating your IP address and making it seem as if you’re present in Iraq. Unfortunately, it’s also very slow, so unsuitable for tasks like streaming and downloading. Plus, Tor is attracting a sordid reputation after being recognized as a method for people to access the dark web.

It’s technically possible to leverage proxy servers to spoof your location. However, free proxy servers have data caps, few server options, and unclear privacy settings. Plus there’s no sophisticated cloaking technology, so they’re easily detected and blocked by sites like Netflix. Additionally, they only encrypt your browser traffic so other applications on your device remain unprotected.