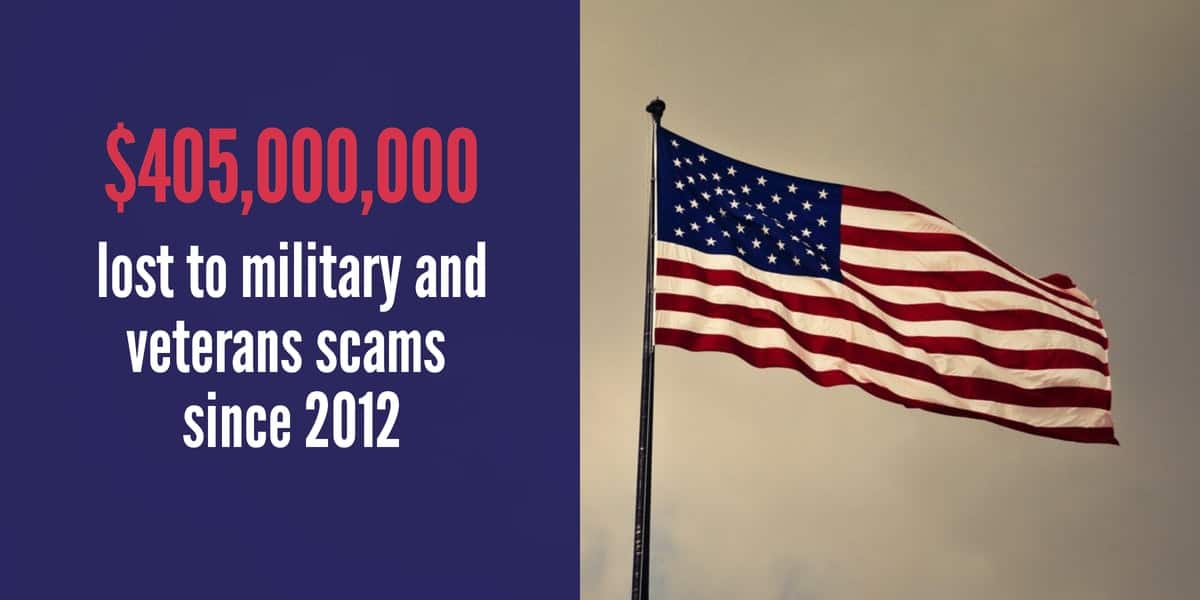 Since 2012, scams that specifically targeted military personnel or veterans affected nearly 1 million people. The damages resulting from these crimes amounted to nearly $405 million.

The remainder of scams/reports noted couldn’t be allocated to a specific force as they targeted more than one or all. It should also be noted that the Army is the largest force, followed by the Navy, with the Coast Guard being the smallest.

The Army received nearly 64% of all the reports and accounted for 51% of the total amount lost. Some of the largest amounts lost by Army members were through impostor scams reported to the FTC. For example, in 2018, 17,172 reports of impostor scams cost a total of $16,177,200.

Number of scams and $ amount lost by military status (since 2012)

Veterans are the most heavily targeted when it comes to scams by military status, accounting for over 60 percent of the reports and over 55 percent of the total amount lost.

Virginia saw the largest number of reports with 70,047. The vast majority of these (70,000) came from a retailer who allegedly “tricked” service members into paying $5 for legal protections (something they would have already had).

The state hit by the biggest financial loss was California – $97,079,975. $92 million of this was the result of a scheme set up by Rome Finance, who promised service members instant finance on expensive electronics but masked the charges and withheld this important information on monthly bills.

Top scam types by numbers reported and $ amount lost (since 2012)

Scams with the largest $ amount lost:

2018 was the biggest year for the number of reported scams with 389,308 in total. 275,000 of these reports stemmed from several phony websites that were set up to “help” kids who wanted to get into the military. However, instead of providing unbiased information, these sites profited from recommendations to for-profit schools that then targeted them to try and get them to enroll.

The biggest loss came in 2014 when soldiers were fleeced for $124,935,715. This was largely a result of the Rome Finance scam that cost soldiers $92 million.

Scams targeting the military vary widely. We’ll review how some of the more common types of scams work and give some real examples of each. Note that a scam might not neatly fit into one category and could overlap with other types of scams.

Impostor scams are the fourth-most reported type of scam and account for the second-most money lost. The impostor can take on a range of roles, from a prospective romantic partner to an official from the Department of Defense.

Romance scams often target deployed members of the military who can’t physically meet potential partners. The scammer will usually pretend to be a woman who gains the soldier’s trust and later asks for money.

Scammers pose as authority figures in the soldier’s military branch or the Department of Defense or Veterans Affairs. They might phish for information that can be used in identity theft or demand some sort of payment.

Affiliation scammers create fake companies and charities that claim to help service members or veterans. They might run ads to lure victims, promising steep discounts or other favorable terms for the military. This is ultimately a bait-and-switch in which the victim ends up being scammed out of money or information. These companies might advertise in military newspapers or magazines, use pictures of service members, use military-sounding names and symbols, and even hire salespeople with military backgrounds.

Employment scams usually target military veterans seeking a job after their careers as soldiers have come to an end.

Scammers will contact veterans looking for jobs to offer them employment, often in a work-from-home environment. Scammers cite the victim’s military career as one of the reasons they were selected. They may even conduct interviews over Skype or Google Hangouts. The scammers often claim to have seen their resume on a legitimate job site like Indeed or ZipRecruiter.

The newly hired victim is then instructed to purchase some necessary work equipment from a third party. The “employer” sends a check to cover the costs. The reality is that scammers run the website where the equipment is purchased. The victim pays for equipment that they never receive, and the check sent to cover the costs bounces.

Another version of this scam hires veterans to receive items purchased with stolen credit cards and re-ship them. The victim might not be aware the items are stolen or what they’re doing is illegal.

Advance fee scams trick victims into paying money to someone in anticipation of receiving something of greater value. The victim actually receives little or nothing in return.

Advance fee scams are common everywhere, the most prominent example being the famous “Nigerian Prince” scam. However, these scams can be tailored specifically for members of the military.

In one case, a scammer posing as a VA official contacted service members who had signed up for a veteran retraining program (VRAP). The scammer promised a large sum of money would be deposited into the victim’s account once they had paid a smaller service fee. In fact, the service fee was pocketed by the scammer and the victim never received anything.

Identity theft takes many forms. Some of the more common crimes include stealing a service member’s benefits or committing tax fraud in their name.

There are numerous reports of family members and significant others collecting money intended for a deceased service member. These include retirement benefits and pensions.

Tax fraudsters file tax returns under soldiers’ names, claiming returns that are far and above what they should be receiving. Once the victim receives their tax return, scammers contact them claiming to be working on behalf of the IRS. They instruct the victim to pay back a portion of the return to a fraudulent account. The victim then gets in trouble with the IRS for filing a false tax return, and the scammer receives the refunded amount.

Similar scams promise favorable interest refinancing, easy-to-get loans, and worry-free investments. The information that victims give up in these scams can not only lead to stolen funds, but stolen identities, as they often include “credit checks” that require Social Security numbers and other vital details.

Charity scams were only included if we knew it directly impacted an active-duty member or veteran. Other charity scams collect monies for veterans etc. but these have an impact on civilians too, so these haven’t been included as we don’t have any clear figures.

There may be some overlap in certain reports to the BBB and the Consumer Sentinel Network, but these are a relatively insignificant exception (a handful of single cases that may have been reported by consumers to both entities).

A scam was assigned to a particular state if we had this information (i.e. the company involved was based here, the force camp was located there, or the information was provided by the consumer affected). Where a case couldn’t be allocated to a specific state (i.e. all of the data provided by the FTC reports), this detail was omitted.

To calculate the monetary loss for the FTC reports, we used the percentage of complaints received per force along with the median amount paid per scam. We also applied the percentages provided to ascertain the number of reports per military status. Often, these percentages needed rounding up/down to provide a whole number. DoD civilians (and dependents of DoD civilians) were removed from the reports from 2012 to 2016 (they aren’t included in the FTC’s 2017 and 2018 reports.

A list of all of the sources and individual figures can be found here: https://docs.google.com/spreadsheets/d/1Mgr9lK_k0GgMhM50bBb5WuV8y8uSP0HfVMpzSA3x58k/edit?usp=sharing