Nearly 100,000 Americans set to lose over $800 million to romance scams this year 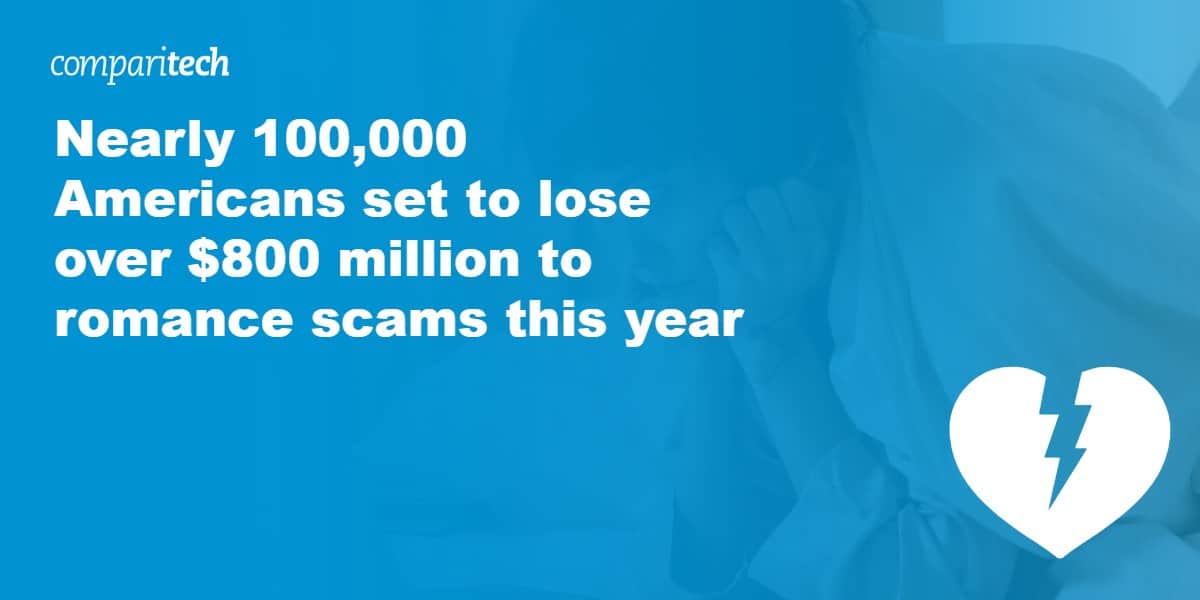 I’m so pleased we met. I love you. I can’t wait to see you. I’ve scheduled a flight for next month.

Finally, you’ve found your dream match. But then…

I’ve had an accident. Can you help me with my medical bills?

My luggage is stuck in customs. Can you submit some paperwork and payments for me?

Unfortunately, our estimates suggest that for nearly 100,000 Americans this year, the saying “If it sounds too good to be true, it probably is” has likely become a haunting, real-life nightmare. Scammed for over $800 million by fraudsters, not only have these victims been left out of pocket, but they’ve also been left humiliated, frightened, and heartbroken.

Why the huge increase?

With the COVID-19 pandemic ongoing, scammers had more reason than ever to prey on those isolated at home (and had the perfect excuse as to why they can’t meet in person). Numerous studies, experts, and surveys have found that an increasing number of people are feeling lonelier than ever amid the pandemic. And that’s provided the perfect inroad for many fraudsters who prey upon those who are looking for someone to talk to.

What’s more, studies indicate that dating sites are at their busiest from the end of December to the middle of February – which could mean that dating scams are set to rise even higher over the last few months.

To get an idea of the extent of romance scams on a state-by-state basis, Comparitech analyzed data from the Internet Crime Complaint Center (IC3), Federal Trade Commission (FTC), Better Business Bureau (BBB), and American Association of Retired Persons (AARP). Using 2020 data and all of the available data for 2021 so far, we’ve been able to create estimates for the entire year to try and understand the true picture of romance scams in 2021.

States with the highest rates of romance scams per 100,000 people

As the above map also shows, the highest rates of romance scams per 100,000 tend to be in western or northeastern states.

States with the highest number of romance scams and losses

The top four states with the highest number of romance scams and losses are:

States with the highest and lowest average loss per romance scam

In contrast, the states with the lowest averages per romance scam were:

Romance scams have increased by 57 percent in 2021 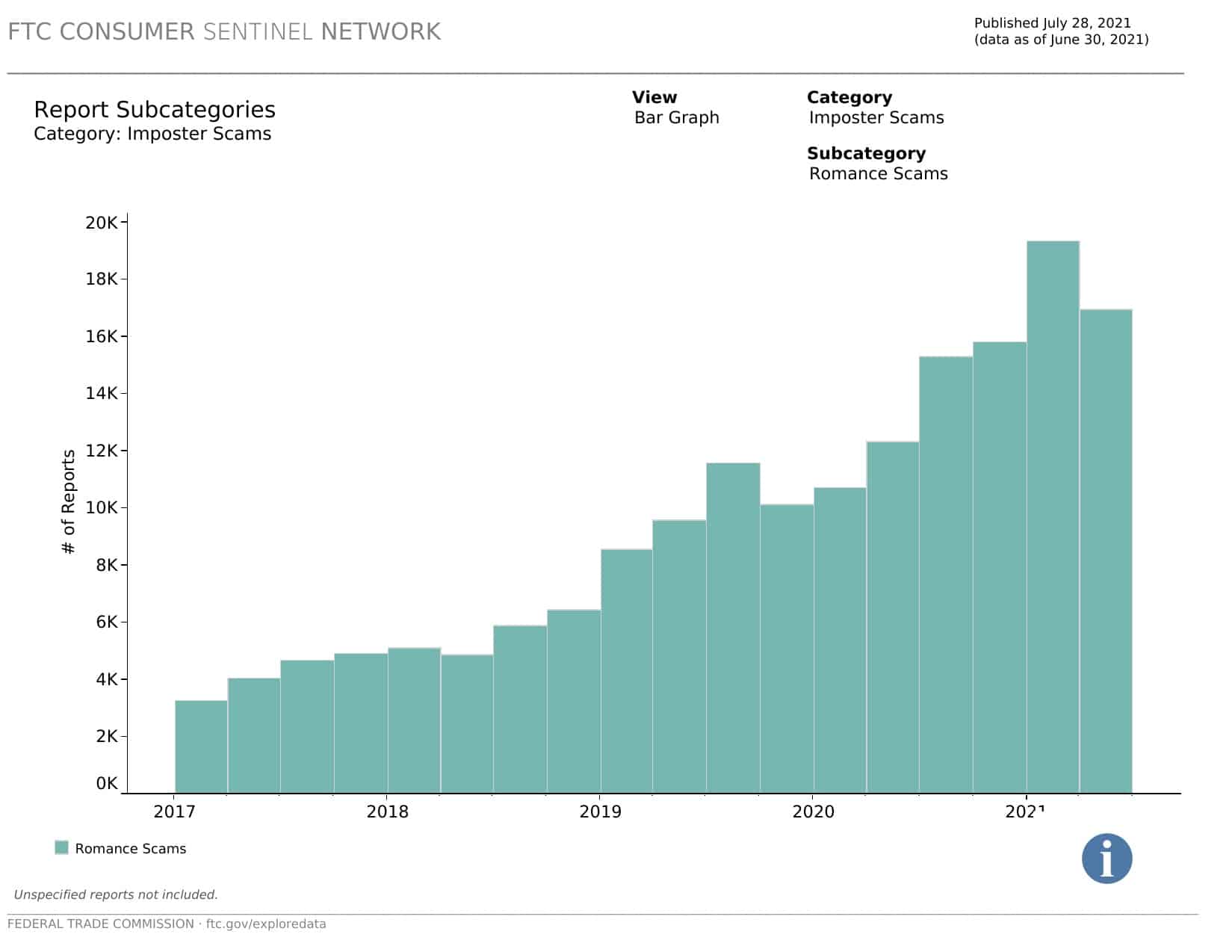 Please note: The total romance scam figures reported by the FTC are always higher than the total of our individual state figures. This is due to some reports not being assigned to a specific state due to lack of location data.

A growing trend is something the IC3 has witnessed, too. 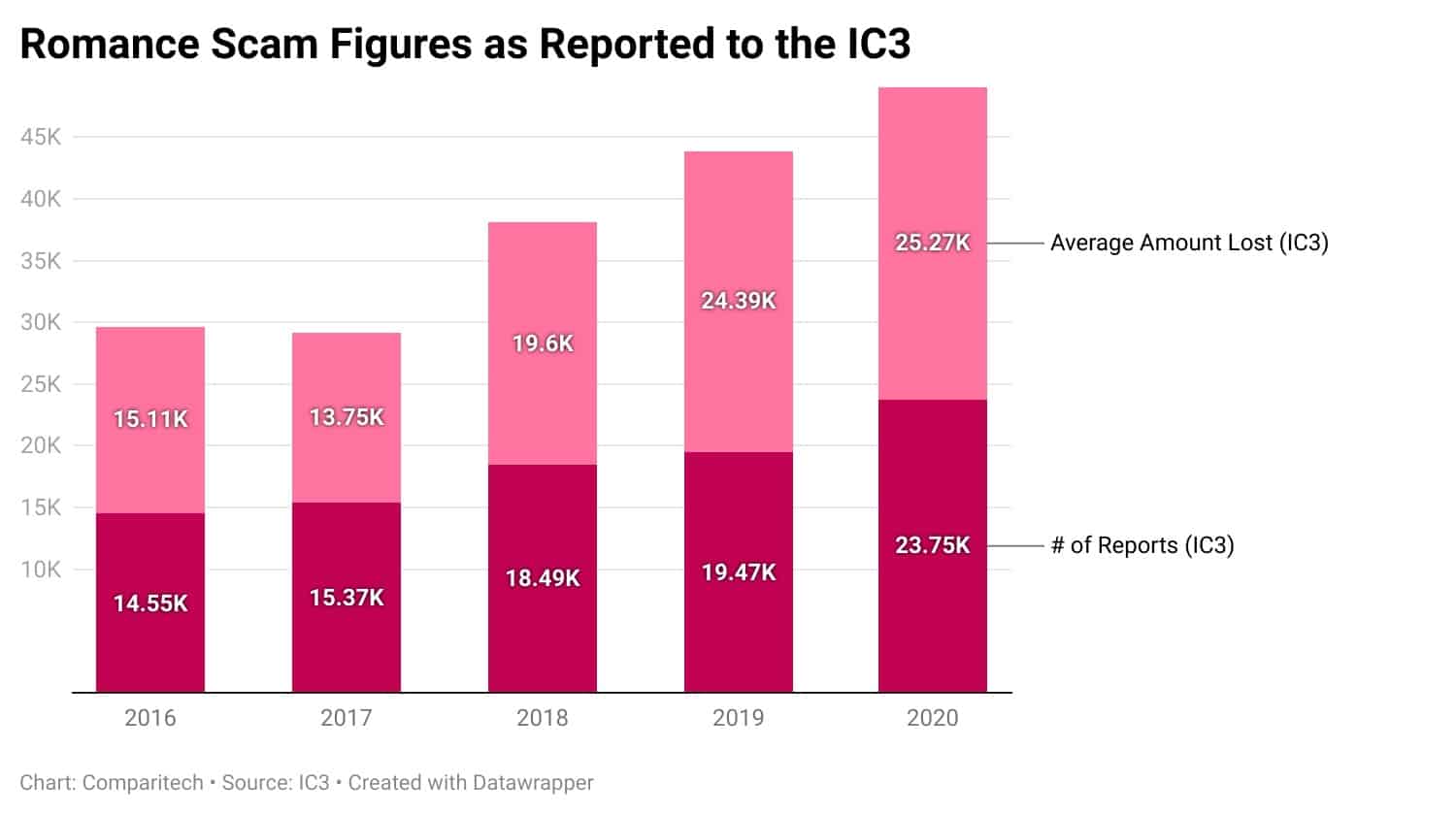 Even though the BBB saw a decline in romance scam reports in 2020 (a decrease of 10 percent from 205 in 2019 to 184 in 2020), the reports so far this year (to mid-October) have already overtaken both 2019’s and 2020’s totals. With 213 reports recorded to date, the BBB has noted a significant increase in romance scams for the year, too. As it stands, the BBB could receive as many as 269 reports this year, which would be a 46 percent increase from last year’s figures.

AARP fits a similar storyline with a slow increase in reported cases from 2019 to 2020 (80 to 122), followed by a huge increase in 2021. With 254 romance scams reported to date (mid-October), the AARP could witness a reporting figure of around 321 cases this year–a 163 percent year-on-year increase.

With all of the reporting avenues noting significant increases in romance scams this year (bar the IC3 which will release its 2021 results in early 2022), 2021 is set to be a record-breaking year for this type of imposter scam.

While the figures we mention above make for stark reading, it’s likely that they’re only half the story with many online scams going under the radar.

Romance scams are highly unreported due to many feeling ashamed of having fallen victim to them and due to how difficult it is to trace the scammers. One survey conducted by the AARP found that 14 percent of US adults had been targeted by a relationship scam and 4 percent were a victim of this type of crime. 57 percent of victims lost money or suffered other financial losses due to these scams.

Even if we allow some room for error and other reports (in previous years, romance scams were perhaps included in another category), we’re still just going to get a fraction of the 4 percent of people who fall victim to these scams each year.

Let’s take a look at how much money could have been lost in each state, based on 4% of the population being a victim of these scams and using 2020’s average loss per scam in each state (based on IC3’s data):

Based on the state data we have available for how much the average victim loses, and factoring in unreported romance scams, we can see that as much as $331 billion could have been lost to these scams (to date).

What are the key warning signs of a romance scam?

If you do meet someone online, even if it seems like a natural occurrence (i.e. some scammers befriend people on apps like Words with Friends), look out for these key warning signs that they may be a scammer:

If any of these apply to someone you’ve just met or certain alarm bells are ringing, protect yourself by:

To get overall figures for all 50 states plus the District of Columbia and Puerto Rico, we used 2020 data from the IC3, FTC, BBB, and AARP, and all of the available data for 2021 from the latter three.

IC3 Data: Data categorized as “Confidence/Romance Scams.” Reports are reviewed and researched before being passed on to federal, state, local, or international law enforcement or regulatory agencies. To estimate 2021’s figures, we used the percentage increase witnessed in each state from 2019 to 2020 before multiplying by the average loss per victim seen in 2020.

FTC Data: As the FTC doesn’t provide state-by-state figures for romance scams (as it is a subcategory of imposter scams), we calculate the percentage of overall imposter scams that relate to romance scams based on the total figures available. For Q1 and Q2 of 2021, this was 6.52 percent. The $ amount lost is derived from overall figures provided by the FTC. A median loss of $2,500 per scam was noted in 2020. This figure was also used for our 2021 estimates.

In order to estimate Q3 and Q4 figures for the FTC, we looked at the percent increases (or decreases) noted by the FTC in the same reporting periods for 2020 (in each state). These were then applied accordingly to gather estimates for the second-half of 2021.

BBB Data: Data categorized as “Romance Scams” and submitted against companies – i.e., fraudulent dating websites, psychics, and romance scammers who ask people to send money to a business. Complaints were investigated by the BBB. Due to data being available up until our reporting period (mid-October 2021), no estimates have been applied to these figures.

AARP Data: Data categorized as “Online Dating Scams.” Help may be provided or cases may be referred to local law enforcement. Due to data being available up until our reporting period (mid-October 2021), no estimates have been applied to these figures.

When discussing the overall figures for the IC3 and FTC, figures may be higher than the total of all the states included in our study. This is due to our study only featuring the 50 states plus the District of Columbia and Puerto Rico. The IC3 and FTC include other areas, e.g. the U.S. Virgin Islands and American Samoa. Equally, some cases don’t have location data so aren’t assigned to a specific state.