How to watch Netflix in China using a VPN

Looking to watch Netflix in China? We explain how VPNs can securely access their home country's library and evade blocks imposed by the Chinese government.
Aimee O'Driscoll VPN AND CYBERSECURITY EXPERT 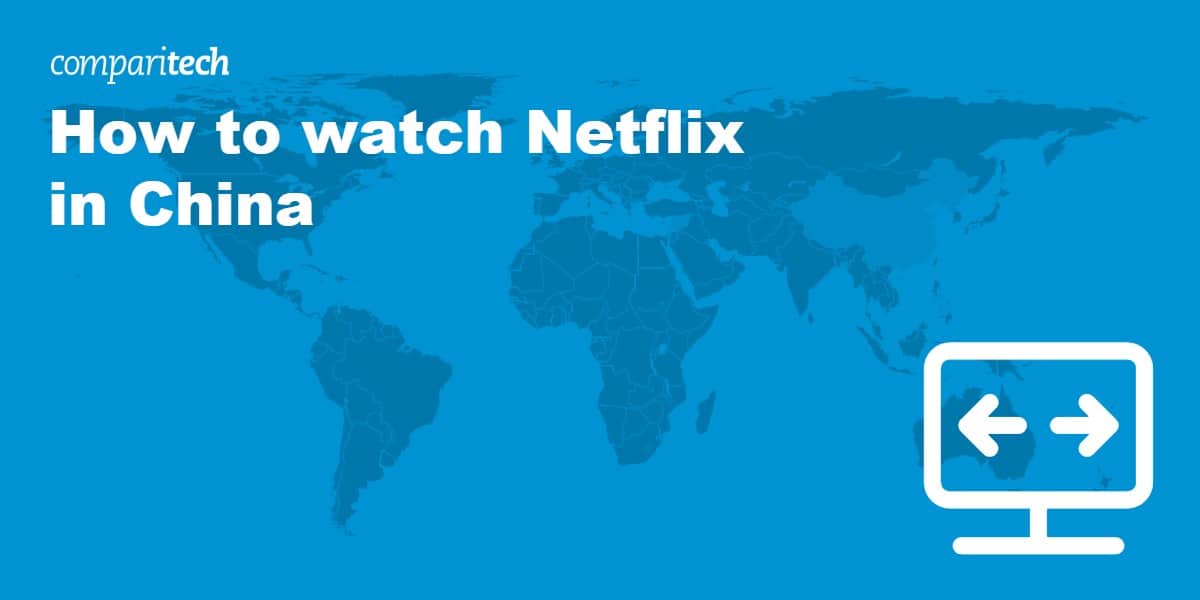 Are you traveling to China and worried about accessing your Netflix? Although most of the world has access to Netflix, the service is still not available in China. So if you want access to your home Netflix library, you will need to use a VPN.

A Virtual Private Network (VPN) will route your internet traffic through a secondary server in another country, so it will appear you’re somewhere other than China. With your location spoofed, you can access content from Netflix and other services you’d use back home, such as Hulu and Amazon Prime Video.

TRY THE TOP VPN FOR NETFLIX IN CHINA RISK FREE

ExpressVPN is offering a fully-featured risk-free 30-day trial if you sign up at this page. You can use the VPN rated #1 for Netflix in China with no restrictions for a month—great if you want to binge your favorite show or are going on a short trip.

How to watch Netflix in China

New to using VPNs? Just follow the steps below. While the VPNs we recommend work in China the VPNs sites will be often be blocked so travelers should sign up before visiting China.

Here’s how to watch Netflix in China with a VPN:

Because most VPN websites are blocked in China, it’s best to get set up and gather troubleshooting information before traveling to the country.

China is notoriously difficult for VPNs, and so each service has to be tested vigorously. Here are some of the criteria we used before recommending the services in this article:

Here’s our list of the best VPNs for Netflix in China:

ExpressVPN is hugely popular in China and is one of the few VPNs that works reliably in the country. It has a ton of server location options with a network spanning 94 countries. Blazing fast speeds make ExpressVPN an ideal streaming VPN. It works well with Netflix US, as well as several other Netflix libraries, including the UK, Australia, Canada, and Japan versions. Looking to securely access other streaming services, like Amazon Prime Video, and Hulu? ExpressVPN can help with those too.

Security and privacy are important when traveling anywhere and especially in China. ExpressVPN has you covered with a strong suite of security features, including military-grade encryption, a kill switch, and leak protection. It keeps no logs of user-identifying data and allows you to sign up with bitcoin and a throwaway email address.

Apps are available for Linux, Windows, MacOS, iOS, and Android. Up to five connections are permitted at a time.

BEST VPN FOR NETFLIX IN CHINA:ExpressVPN is our top pick for watching Netflix in China. It provides fast, reliable connections, works with a ton of streaming sites, and offers unrivaled customer support. A 30-day money-back guarantee makes it a risk-free option.

NordVPN is an excellent budget VPN for users in China. It has a huge network of more than 5,200 servers in 60+ countries. This provider is known for its ability to securely access to multiple Netflix libraries, including the US and UK catalogs. If it can’t connect you to the library that corresponds to your chosen server, it will redirect you to the US Netflix site. This is handy since it means that every server works with Netflix.

NordVPN keeps no logs at all and employs strong encryption standards. Extras include automatic wifi protection and servers optimized for particular tasks such as P2P and double VPN. If you’re having trouble connecting in China, using a server that’s labeled Obfuscated will improve your chance of success.

NordVPN apps can be downloaded for Windows, Linux, MacOS, iOS, and Android. Up to six simultaneous connections are allowed under each plan.

A RELIABLE CHOICE:NordVPN is a great option for Netflix in China. It has a large server network, works with Netflix, and lets you browse freely in China. Plans include a 30-day money-back guarantee.

Surfshark is the best budget choice for Netflix in China. It hasn’t been around for as long as most of its rivals, but the company burst onto the scene with a well-rounded package. It has over 3,200 servers in more than 60 countries and is adept at bypassing the restrictions set in place by the Chinese government. This VPN is fast and great for streaming. As with NordVPN, any Surfshark server will give you secure access to Netflix, defaulting to the US library when others are unavailable.

Security is in the form of strong encryption, along with essentials such as a kill switch and leak protection. Surfshark won’t log any of your data.

Native apps are available for Linux, Windows, MacOS, iOS, and Android. There’s no limit on the number of devices you can connect.

BEST BUDGET CHOICE:Surfshark is a strong contender, especially when you consider it imposes no device limit. Plans include a 30-day money-back guarantee.

Hotspot Shield has been improving its service in recent months, although it has always been renowned for its extremely fast speeds. It provides a selection of more than 1,800 servers in over 80 countries. Plus it works in China and can securely access Netflix and other streaming sites.

You can download software versions for Windows, MacOS, iOS, and Android, and connect up to five devices at a time.

Check out the full review of Hotspot Shield.

PrivateVPN seems like a relatively meek competitor on the surface. It runs a network of just over 200 servers in 60+ countries. However, this service works in China and is well-known for its ability to fly under the radar. Not only that, but it works well with Netflix and sites like Hulu, Amazon Prime Video, and BBC iPlayer.

PrivateVPN doesn’t keep any logs and secures your information with the same level of security its larger competitors provide. Plus it has great speeds and reliable connections.

Desktop clients are available for Windows and MacOS, and mobile apps for iOS and Android. Six simultaneous connections are permitted.

SECURE AND RELIABLE:PrivateVPN is small yet powerful. It can help you watch Netflix in China while providing you with a fast, secure, and reliable connection. Subscriptions include a 30-day money-back guarantee.

How we find the best VPNs for Netflix in China

To ensure consumers select the right VPN for their requirements and enjoy a VPN experience that’s nothing less than excellent, we put VPNs through rigorous testing. During testing, several factors are considered, detailed within our VPN testing methodology guide. Some of the most significant testing factors are included below:

Can I watch Netflix in China with a free VPN?

The chances of you being able to use a free VPN to watch Netflix in China are very slim. In fact, finding one that will work in China or securely access Netflix is unlikely, so discovering one that can do both would take a small miracle.

Netflix has cracked down on VPN usage and free VPNs simply don’t have the resources to spend on finding workarounds. Similarly, they’re unable to develop superior cloaking technology to evade China’s Great Firewall.

Even if you do find a suitable free VPN, you’ll be unsatisfied with the service. These VPNs provide slow, unreliable connections and often bombard users with ads. They are also unsuitable for keeping your data secure and private. Many use weak encryption standards and some track your online activity and sell the data to the highest bidder.

These services also offer next to no support. You could find yourself in China with no access to geo-restricted content and no one to help you.

Opting to pay a nominal fee for a reputable provider is your best bet.

Contrary to some reports, Netflix isn’t actually blocked in China, but rather the streaming platform has never been launched there. It’s possible to access the Netflix website in China, but there will be no library of content for you to view.

Netflix is available in more than 200 countries. However, the Chinese market is extremely difficult to crack, mainly due to strict regulations imposed by the government. Netflix did have a deal with iQiyi (owned by Chinese search engine giant Baidu), whereby some of its content was shown, but that has since ended.

For now, Netflix is producing a growing number of Mandarin titles. While this is reportedly intended to appease the global Chinese population, it may signal that the company is poised for another attempt to enter the Chinese market. However, with iQiyi pursuing aggressive growth, it could still be a long time before we see a Netflix China.

Meanwhile, travelers in China who want to watch Netflix have no choice but to use a VPN to regain access to their home country’s Netflix library.

Using a VPN in China

As mentioned, the Chinese government makes efforts to block VPN traffic within the country. They use sophisticated methods to detect VPN connections, such as Deep Packet Inspection (DPI). Even many VPNs that attempt to hide their traffic can’t avoid these restrictions. As such, you need a VPN with advanced cloaking technology (such as those listed above) that successfully disguise their traffic as a regular internet connection.

A more primitive method used to stop VPN usage is the forcing of ISPs to blacklist the websites of VPN providers. In addition, companies like Apple have agreed not to include VPN apps in their Chinese app stores. This means that once you’re in China, it’s very difficult to download and install a VPN app. If you plan to use a VPN while in China, you should download the software before you enter the country.

Note that although VPNs are banned in China, their use is not illegal. However, there have been reports of the government cracking down on providers of VPNs, including a nine-month jail sentence in a 2017 case.