NordVPN not working with Hulu?

Are you having issues getting NordVPN to work with Hulu? It’s our top pick for accessing Hulu streams, so we’ll take you through some of the most common problems, along with offering various solutions.
James Milin-Ashmore 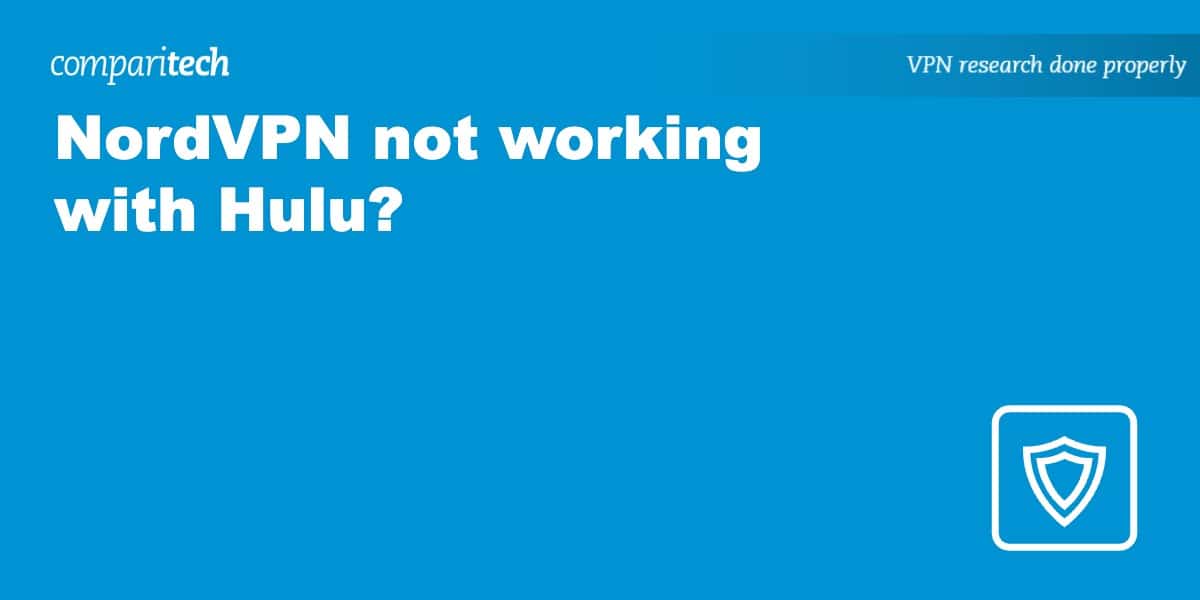 The region-locked Hulu streaming service is only available in the United States, aside from a smaller Japanese offshoot. This can be frustrating for users traveling abroad who find that they can’t access their favorite content from outside the country. Luckily there’s a simple solution. Using a Virtual Private Network (VPN) allows you to connect to the streaming platform and watch content from anywhere in the world.

Not all VPNs are capable of accessing Hulu, but NordVPN is one of the few that can reliably unlock the platform. However, do occasionally encounter problems, such as the following error message: “Based on your IP address, we noticed you are trying to access Hulu through an anonymous proxy tool.”.

In this article, we’ll talk you through the common issues that you could run into while unlocking the service with NordVPN and how to fix them. Plus, we’ll list some other VPNs that work to access Hulu from anywhere and answer some common VPN questions.

Why isn’t NordVPN working with Hulu?

NordVPN has been able to unblock Hulu streams consistently in the past, but it occasionally comes up against minor issues.

Here are some of the most common reasons why NordVPN is not working with Hulu:

How to fix NordVPN not working with Hulu

Luckily there are easy ways to fix all of these issues above. Just follow these steps, and you’ll be watching your favorite content in no time.

Here’s how to fix NordVPN not working with Hulu:

No matter which VPN you’re using, the process for signing in to Hulu outside of the US will be similar to the instructions seen below.

Here’s how to sign in to Hulu with NordVPN from anywhere in the world:

WANT TO TRY THE TOP VPN FOR HULU RISK FREE?

NordVPN is offering a fully-featured risk-free 30-day trial if you sign up at this page. You can use the VPN rated #1 for Hulu with no restrictions for a month—great if you want to binge your favorite show or are going on a short trip.

Which are the best VPNs for streaming Hulu?

Streaming services may block a VPN server without any warning. This is because Hulu is constantly looking for new ways to prevent the use of VPNs to access their content. However, some VPNs are far better than others in terms of accessing services like Hulu consistently.

NordVPN is our pick as the best VPN for Hulu, but we’ve listed a variety of viable alternatives below:

If you want to find out more about these VPNs, check out our article on the best VPNs for Hulu.

Can I use a free VPN to watch Hulu?

It's technically possible to use a free VPN to watch Hulu. However, since many paid VPNs lack the ability to access Hulu, it's unlikely that you'll find a free one that can do so. Plus, if you do find one, it's not likely to be great for streaming since free VPNs tend to have fewer servers overloaded with users. This translates to slower speeds and lots of lag while streaming. Free VPNs may also limit bandwidth or connection speeds.

Then there are the various security risks associated with using a free VPN. A 2020 study looking at iOS VPN applications found that nearly 40 percent leaked personally identifiable information, while others store user data and sell it to third parties. So, we’d be wary of trusting free services with your data.

What can I watch on Hulu?

Hulu has a wealth of content to choose from, including live streams and catch-up. It includes access to Disney+ and ESPN+, Unlimited DVR, movies, shows, and sports, along with 75+ live TV channels. You’ll also be able to watch the latest Hulu Originals.

Will using a VPN slow my connection while streaming?

A VPN will encrypt all data sent to and from your device, which could have an impact on your overall connection speeds. It’ll depend on various factors, but you shouldn’t see much difference while using the fastest VPNs on the market.

For example, Hulu recommends speeds of at least 3.0 Mbps for streaming content from their library, 8.0 Mbps for live streams, and 16.0 Mbps for 4K content.

NordVPN recorded an average download speed of 369 Mbps across all locations and times tested, so it’s more than quick enough for Hulu. The VPN’s North American servers had average speeds of 460 Mbps, which is what you’ll be using to access Hulu.

Why does Hulu block VPNs?

Hulu and other streaming services like Netflix, Amazon Prime Video, and Disney+ are obliged to region-lock some content. Hulu is only available in the US, and broadcasting rights vary depending on the region. For example, a UK broadcaster might have paid for the rights to show Hulu content in that region, preventing Hulu from doing so.

Hulu region locks its content to avoid any potential copyright violations and to protect existing licensing agreements. For this reason, it blocks any international IP addresses that attempt to connect to the service. And it also blocks VPNs in an attempt to prevent people from using a VPN to bypass this restriction.