It’s often difficult to compare one Virtual Private Network (VPN) to another, especially if you’re unfamiliar with all of the jargon they use. To make things easier, we’re pitting two popular VPNs against one another and listing exactly what each offers. This time, it’s NordVPN vs. IPVanish: read on to see which of these VPNs is best for the average user.
Ian Garland Streaming, Kodi and VPN Expert 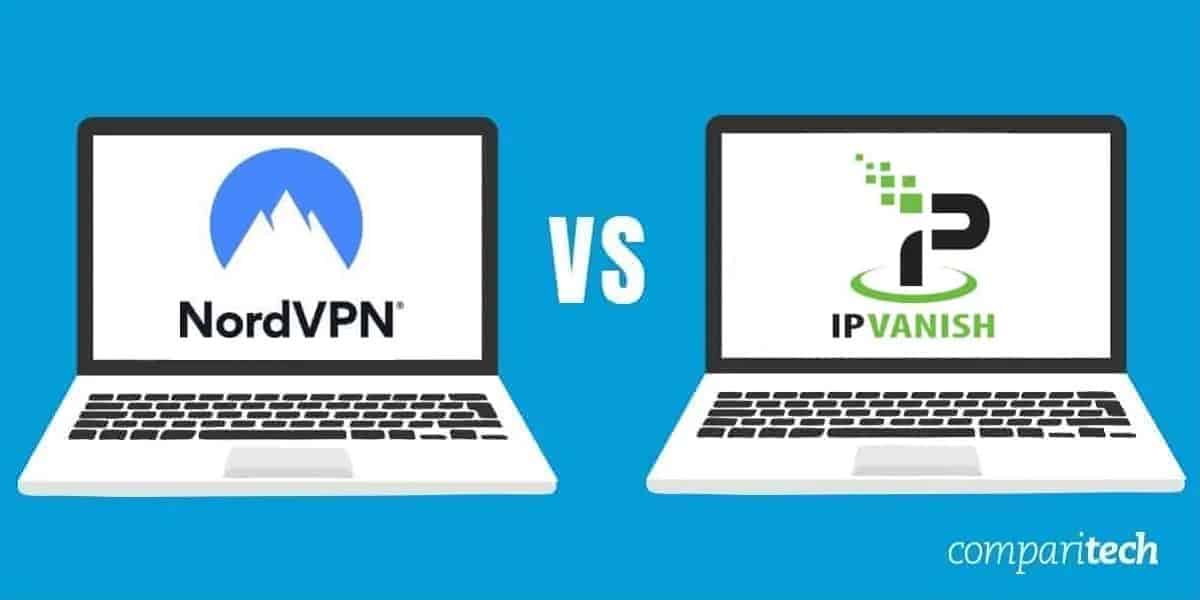 The table above highlights the differences between each company’s approach: NordVPN prioritizes steep discounts for users willing to sign up for longer periods of time, while IPVanish is predominantly for those seeking short-term coverage.

These services are fairly evenly-priced, at least on monthly rolling subscriptions. By choosing a longer subscription period, however, you’ll see the price of each VPN drop significantly, with just $20 between the two over the course of a year. Users willing to commit for even longer can reduce this further with NordVPN, as it offers two years of coverage for $89. This puts it almost in line with IPVanish, which would charge $78 for two consecutive annual plans.

Both services come with a 30-day money-back guarantee. This gives you time to test either service out on all of your devices and decide whether you’d like to continue using it or not. If not, just cancel for a full refund.

Best Deal for NordVPN: Save 68% with a two-year subscription.

Best Deal for IPVanish: Get a 76% discount with an annual plan.

Both IPVanish and NordVPN have strong multi-platform support but there are a couple of differences between the two. NordVPN, for instance, offers a command line-based installer for Linux. IPVanish, on the other hand, has to manually configured.

That said, IPVanish allows users to connect any number of devices at once (compared to NordVPN’s six-connection limit). This means it might be the better choice for people looking to share their account with family, or simply for those with lots of devices to protect. You can even choose to allow certain applications through the VPN, which lets you conserve bandwidth by only encrypting potentially-sensitive traffic.

NordVPN includes a few extra features that give it the edge here, however. For instance, it can block ads and scan for malware automatically, and you can set it to automatically connect whenever you connect to specific wifi networks. There are also browser extensions for Chrome and Firefox, though it’s worth noting that these only encrypt your browser traffic and don’t allow protect P2P networks or other internet-facing apps on your device.

NordVPN is famous for its ability to bypass stubborn geo-blocking. While IPVanish can unblock a decent selection of regional streaming platforms, it struggles to bypass the more stringent geo-restriction measures used by larger, more popular services. As shown in the table above, NordVPN not only unblocks a wider range of services, it also enables users to access a wider range of country-specific Netflix libraries, a feature which is highly in-demand.

Neither of these services can unblock ABC abroad. Rather than any failing on the VPN’s part, this is because ABC has far stronger geo-blocking measures than most regional networks.

China poses a particular problem to VPN providers. Recent updates to the country’s Great Firewall have made it especially difficult to browse privately, and IPVanish admits that its service is unlikely to work in China. It does, however, offer installation guides for users willing to try regardless.

In contrast, NordVPN works perfectly in China. The service’s obfuscated servers require a little configuration required before use but the entire process only takes a minute. Afterwards, you’re free to use the internet as normal. It’s important to note that most VPN websites (including NordVPN’s) are blocked by China’s firewall, so you should plan to install and setup the service before you actually arrive in China.

Both of these VPNs have clean, easy-to-use desktop apps. NordVPN allows users to choose their server either from a list or on a map, and includes a quick-connect button on the main page. There’s a separate tab for settings, and these are neatly organized, making it easy to find whatever you need. 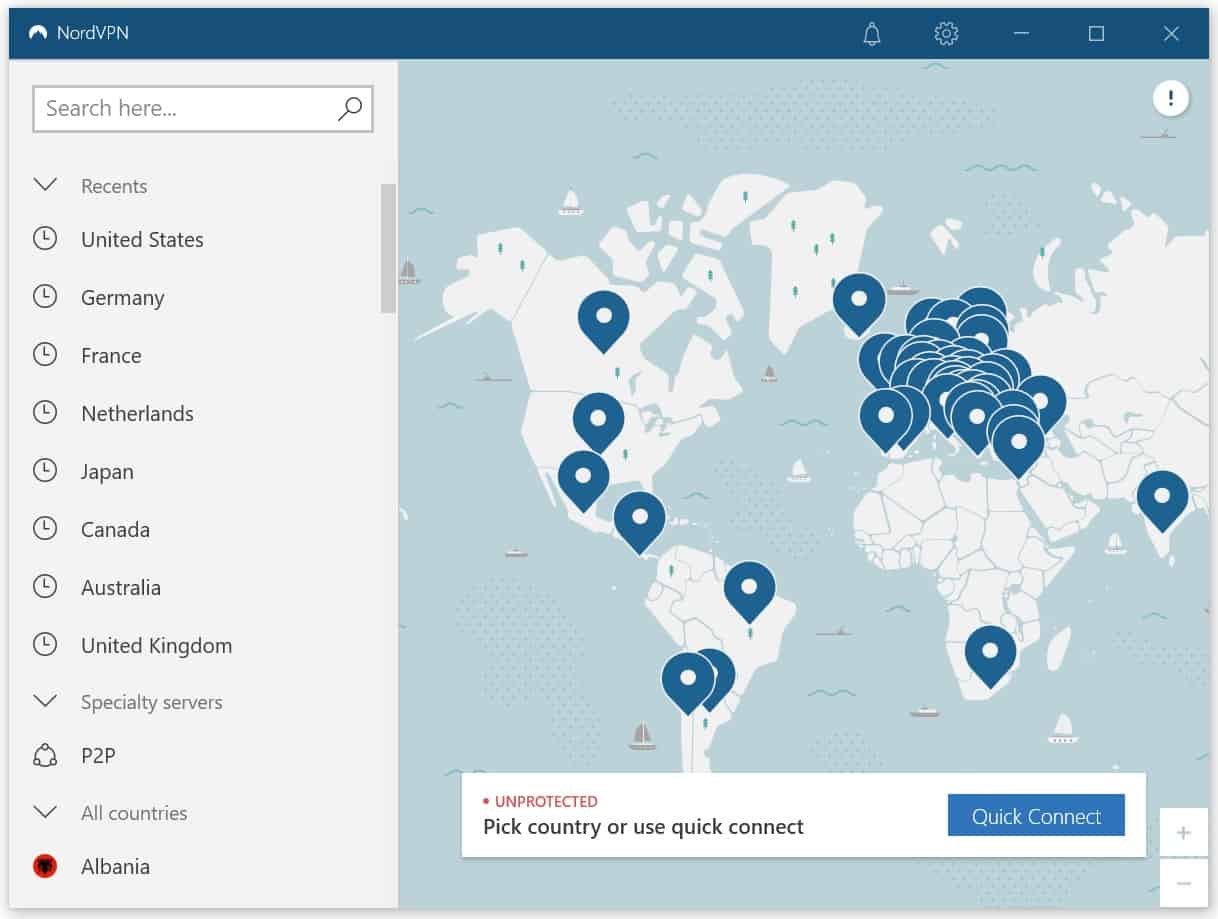 IPVanish’s desktop app gives you slightly more control, but still doesn’t overwhelm the user. Its main page allows you to choose your preferred country, city (where available), and even a specific server. There aren’t as many advanced options, but this does mean that IPVanish is easier for novices to use. 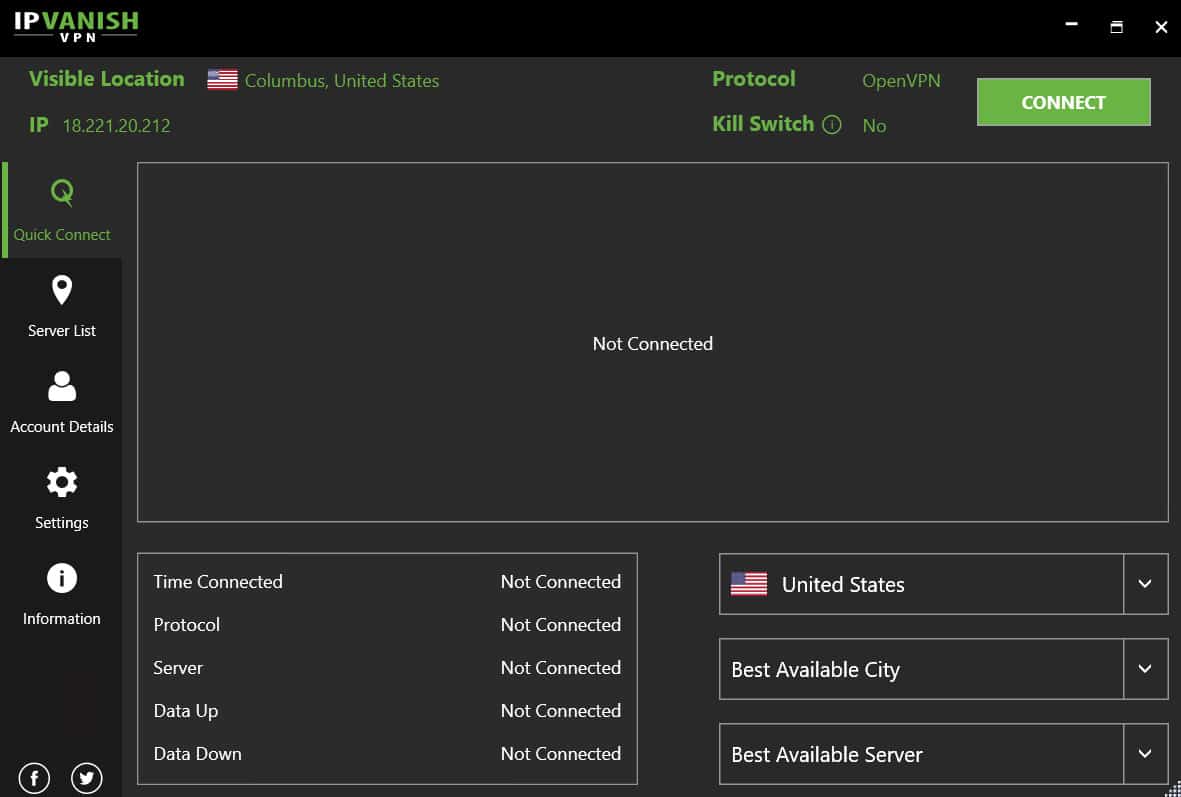 These services both offer exceptional mobile apps. NordVPN allows you to access your favorite servers, as well as those designed for Tor over VPN, P2P, and multi-VPN usage, right on the home screen. There are fewer options to choose from than in the desktop app, but the ability to obfuscate your traffic, protect wifi, and connect automatically remains.

IPVanish’s mobile app is similarly easy to use. Its home screen is simplistic, with a large quick-connect button and server selection menus, while its settings page maintains most of the functionality present in the desktop app. While you can change protocol on IPVanish’s desktop app, only the OpenVPN protocol is available on mobile.

NordVPN has a significant advantage here. It boasts the largest network of any major VPN, and has over 5,100 servers globally. This ensures that users can obtain a fast, low-latency connection regardless of where they are in the world. Further, this is the fastest of any VPN we’ve tested, whereas IPVanish placed eighth. It’s still fast enough for HD streaming, but you might struggle if lots of people are watching at the same time.

While IPVanish covers a similar number of countries, it has a far smaller network. As such, IPVanish is less likely to be able to facilitate access to multiple cities in a given country.

Take a look at the table below to see where each of these VPNs have servers:

IPVanish enables users to connect via the OpenVPN, IKEv2, L2TP, and PPTP protocols. NordVPN, on the other hand, only permits OpenVPN and its own Wireguard-based NordLynx protocol. This is a particularly fast and secure protocol that’s largely responsible for NordVPN’s recent speed increase. Both services use 256-bit AES encryption which is effectively uncrackable, but since NordVPN’s RSA keys are twice the length of IPVanish’s, it’s slightly more secure.

Both offer a kill switch (in their respective desktop apps) which stops all data transfer should you disconnect from the VPN unexpectedly. They each use their own DNS servers too: this ensures that no third party has access to your traffic at any point.

NordVPN has a selection of obfuscated servers designed for use in countries with strict online censorship. These servers use obfsproxy to reshape your traffic, preventing organizations that use deep-packet inspection from realizing that you’re using a VPN at all. IPVanish has a similar feature which allows you to scramble OpenVPN traffic, but this isn’t as effective in countries like China or the United Arab Emirates.

NordVPN is based in Panama, a country with no mandatory data retention laws, while IPVanish operates out of the United States. As the US is one of the Five Eyes countries, theoretically, details of your activities could be shared between the US, the UK, Canada, Australia, and New Zealand. However, if your VPN provider doesn’t keep any logs, this shouldn’t matter since your activities can’t be traced back to you in the first place.

NordVPN keeps no logs whatsoever. Some VPNs log things like your source IP address, timestamps, data volume, sites visited, or the server used, but NordVPN won’t. It even allows you to sign up anonymously, provided you use a throwaway email address and pay via cryptocurrency.

IPVanish has long claimed to be a zero-logs provider, but in 2018, the company provided information as part of a Homeland Security investigation. IPVanish has since changed ownership, however, and claims that it keeps no logs. Currently, this VPN does not accept any form of cryptocurrency.

Both of these VPNs use a shared address allocation system. This means that every user who connects to the same server is given the same IP address. With so much overlapping traffic, it’s

effectively impossible to tell which user accessed a given site. NordVPN allows you to pay extra in exchange for a dedicated IP address, if you’d prefer, but IPVanish has no such option.

Neither service offers specific anti-DDoS servers, although NordVPN used to. Really, any VPN provides some protection against DDoS attacks since the impact is absorbed and spread across an international server network instead of being focused solely on your device. Even if you’re targeted by a large-scale attack, most VPNs automatically detect this and offset any problems simply by switching the server’s IP address.

NordVPN and IPVanish both provide customer support over 24/7 live chat, although NordVPNs service is run by in-house staff while IPVanish’s is outsourced. We messaged both teams at varying times of day and found that both replied promptly and were knowledgeable about the service and capable of answering fairly technical questions.

Each service has a ticket support system and a searchable knowledge base. While tutorials are usually illustrated with screenshots, short video walkthroughs for solving some of the more common problems are available on the NordVPN and IPVanish YouTube channels.

Usually, the easiest way to get help is over live chat. However, we sent three questions via email (at different times each day) to each service in order to see how quickly they could address more complex problems. Below, you’ll find the questions we asked, how long NordVPN and IPVanish took to reply, and whether they provided a suitable answer or not.

Both of these services replied promptly to email enquiries, although they both used pre-written responses to form at least part of their answers. Having said that, the customer support teams are clearly knowledgeable about their products. IPVanish staff even explained step-by-step how to install the service on OpenELEC devices — a platform it doesn’t officially support.

To be clear, NordVPN and IPVanish are both excellent services. IPVanish, for instance, is privacy-conscious, highly secure and very fast, meaning it’s excellent for torrenting. Further, its apps are lightweight and easy to install across a huge range of platforms including the Amazon Fire TV; this is part of the reason this VPN is so popular with Kodi users. However, IPVanish struggles to unblock some of the larger, more popular streaming sites, which is why, in a one-on-one contest, we believe NordVPN comes out on top.

NordVPN’s massive network, high speeds, and excellent unblocking capabilities make it a strong choice for those looking to use geo-blocked services abroad. This service puts a major emphasis on your privacy: it allows you to sign up anonymously but even if you don’t, your activities can’t be traced since NordVPN logs no personally identifiable information at all.

Finally, NordVPN is highly versatile. It has a wide selection of security features, allows you to obtain a dedicated IP address, and even works flawlessly in countries like China, where a huge number of websites entirely unavailable. With apps for all major operating systems and in-house support available at any time, day or night, NordVPN proves it’s a reliable, easy-to-use service with a lot to offer.

Best Deal for NordVPN: Save 68% with a two-year subscription.

Best Deal for IPVanish: Get a 76% discount with an annual plan.