How Many Americans Submitted Complaints Against Robocalls? Analysis of the FTC’s Do Not Call Registry

Robocalls have been on the rise in the U.S. for years, prompting the FCC to launch a new anti-robocalling initiative in June 2019. Ajit Pai, who heads the FCC, has claimed the new policies will help consumers, ‘Stem the flow of scam robocalls,” the initiative has been met with widespread criticism. Much of this hinges on the assertion that the plan “has no teeth;” in other words, while it puts several directives in place, it lacks the ability to actually enforce any of them. Furthermore, it’s unclear how the new technology allowed under the directive will be funded or implemented.

This makes a huge difference to consumers, as Americans already spend an incredible amount of time on their phones. The average phone carrier in the U.S. spends over four hours on a device per day, to be exact, and this massive increase in usage has come along with a big increase in robocalls. These unwanted calls, which range from debt collectors to imposter scams, occurred approximately 26.3 billion times in the U.S. in 2018.

To get a better handle on what these calls are about and who gets targeted, we analyzed data from the Federal Trade Commission to understand better robocalls registered around the U.S. over time. In addition to confirming the findings already reported in numerous studies on the scope and scale of robocalls, we learned about the efficacy of do not call lists, the number of complaints about robocalls, and the biggest states for unwanted, robotic voice spam. Read on to see how your region compares – and what’s going on at the other end of your phone. 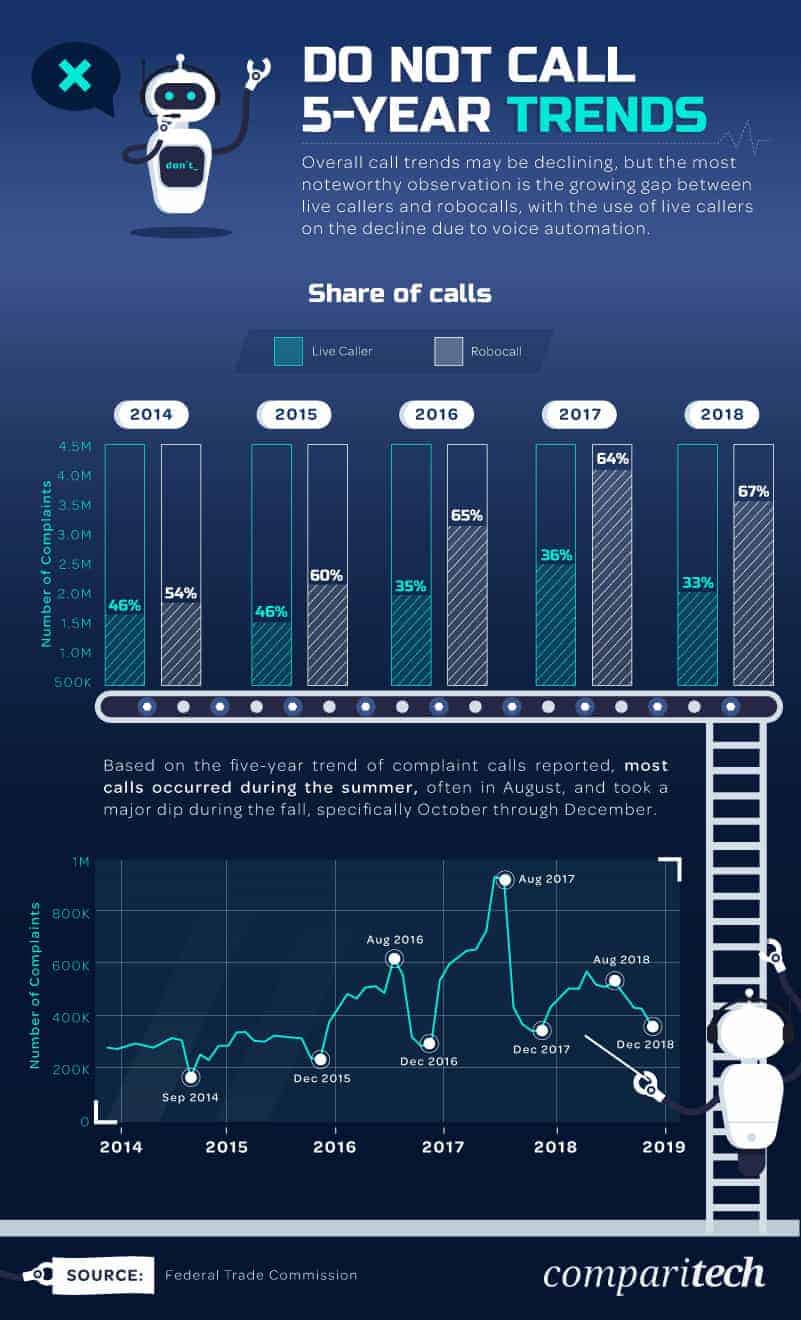 The National Do Not Call Registry is an official government registry that allows consumers to avoid unsolicited sales calls. But even those on the registry might receive a call sometimes, and millions of other Americans who are not on the list deal with telemarketers constantly – in fact, most Americans receive at least one robocall per day.

We examined five-year trends from 2014 to 2018 on both live callers and robocalls to see how they’ve changed in frequency over time – and whether Americans are complaining.

As it turns out, complaints to the FTC about robocalls are generally rising. Robocall complaints grew by 165% between 2014 and 2017, reaching a peak of 4.5 million annually before slightly decreasing to about 3.8 million in 2018. Robocalls were more prevalent than complaints about live callers, possibly because the human element is removed.

But on the calendar of monthly complaints, some months stood out more than others. Most complaints about spam calls occurred during the summer – often in August – before declining during the fall, between October and December. August of 2017, in particular, saw a peak for complaints – 939,000 people reported calls to the FTC.

Spam calls certainly happen everywhere in the U.S., but where are they happening the most? Our analysis suggests that the top states for complaints about spam calls were Nevada, Colorado, Arizona, Oregon, and New Jersey. Users in these states dealt with more than double the robocalls per capita than many of the least-called states, and nearly five times the rate of those received in Alaska. 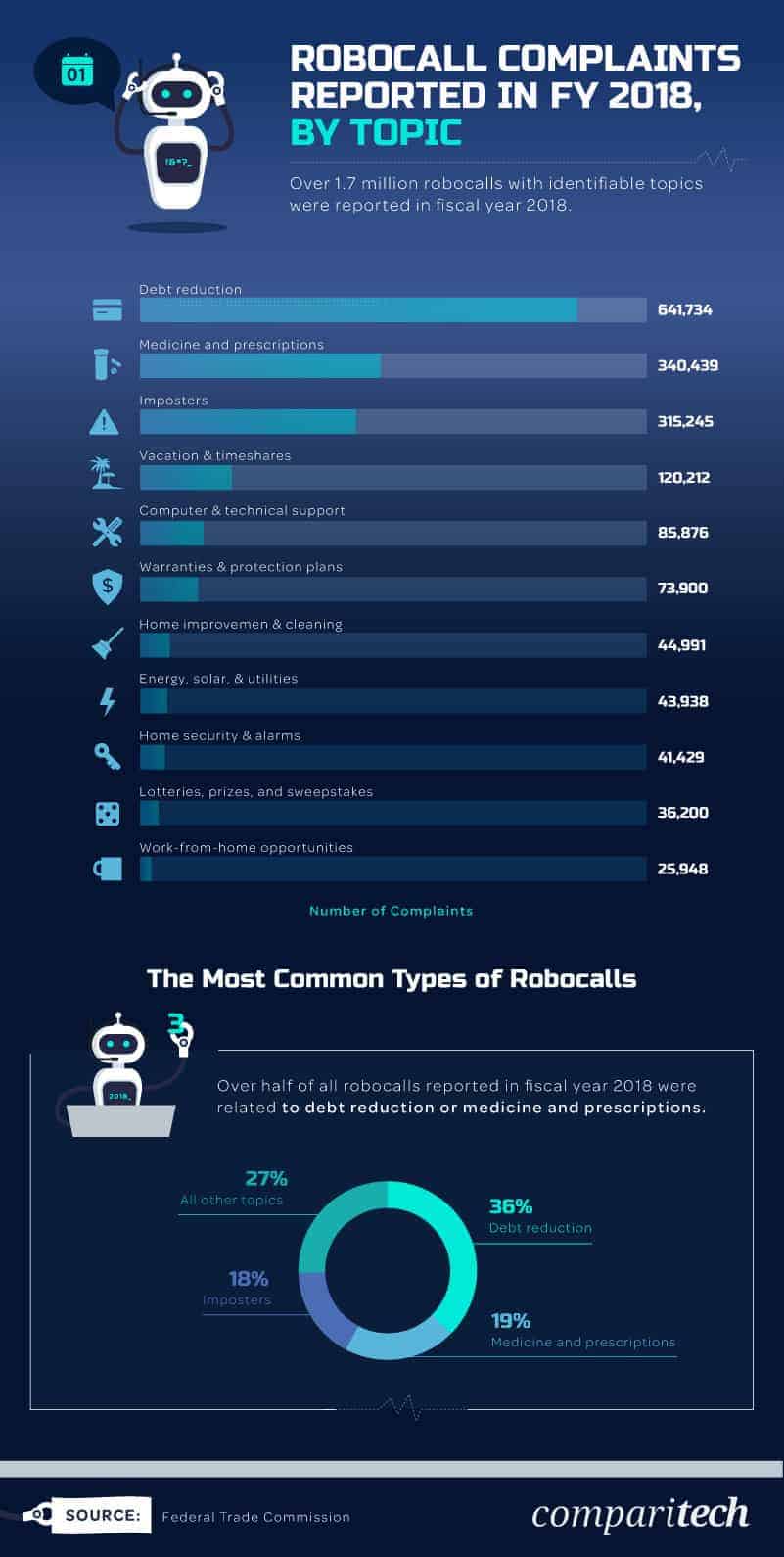 Even spam comes with a topic of conversation, apparently. Of robocalls reported to the FTC in the fiscal year 2018, more than 1.7 million included identifiable topics. By far, the most common topic identified was debt reduction, with more than 641,700 calls discussing it. Calls related to medical care or medical bills, imposter callers, vacations and timeshares, computers and technical support, and warranties and protection plans were also leading topics when it came to spam calls in 2018.

In general, spam calls didn’t appear to have much diversity – the top three topics mentioned made up 73% of all reported robocalls in 2018. And even imposter callers didn’t put in that much effort it seems: Only 20% of calls made by imposters actually involved a live caller instead of a robot.

Robocalls are known to be annoying, disruptive, and frequent – some individuals have reported receiving them as much as six times a day. This point is illustrated by everything from the major increases in FCC complaints to the uptick in Google searches for ‘phone spam’ over the last five years, but this still says little about the nature of the calls themselves or what individuals or entities might be behind the dramatic recent increases.

According to our analysis, robocalls made during a six-week span in 2019 came from 327 unique area codes and 254,236 unique phone numbers. Calls from importers, in which a live caller  or recording pretends to a business, family, friend, or government entity, targeted California, Washington, D.C., and Oregon more than anywhere else in the U.S.. However, complaints about robocalls regarding medicine and prescriptions were most likely to come from Connecticut – a state known for its overwhelming presence of health insurance companies – and Arizona. Complaints about charity calls most likely came from Washington, D.C., and complaints about debt reduction calls most likely came from Maine. 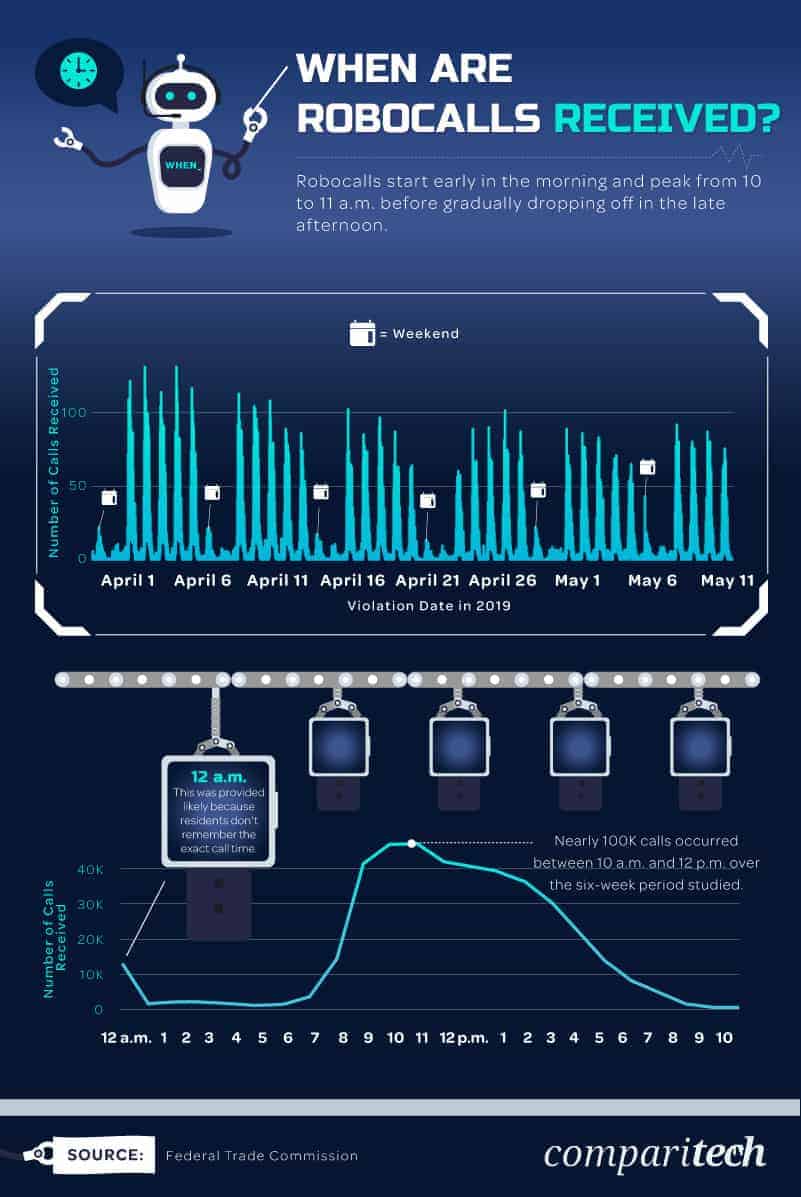 Robocalls are known to bother people frequently and at painfully inconvenient times. However, based on complaint data collected by the FTC, people were much more likely to report robocalls during the week than on the weekend. This could be due to a sharp decline in robocalls, or it could be because those who would normally report robocalls have better things to do with their Saturday and Sunday.

Nevertheless, robocalls tended to start pestering people bright and early. An hour-by-hour look at robocall complaints revealed a steep increase in calls starting at 7 a.m. when people are often waking up or getting started on their commute to work. These calls peaked around 10 to 11 a.m. and then slowly declined in the evening at around 8 p.m. There’s no doubt about it: Robocalls are likely disrupting your sleep, commute, meals, and even your evening dog walk. 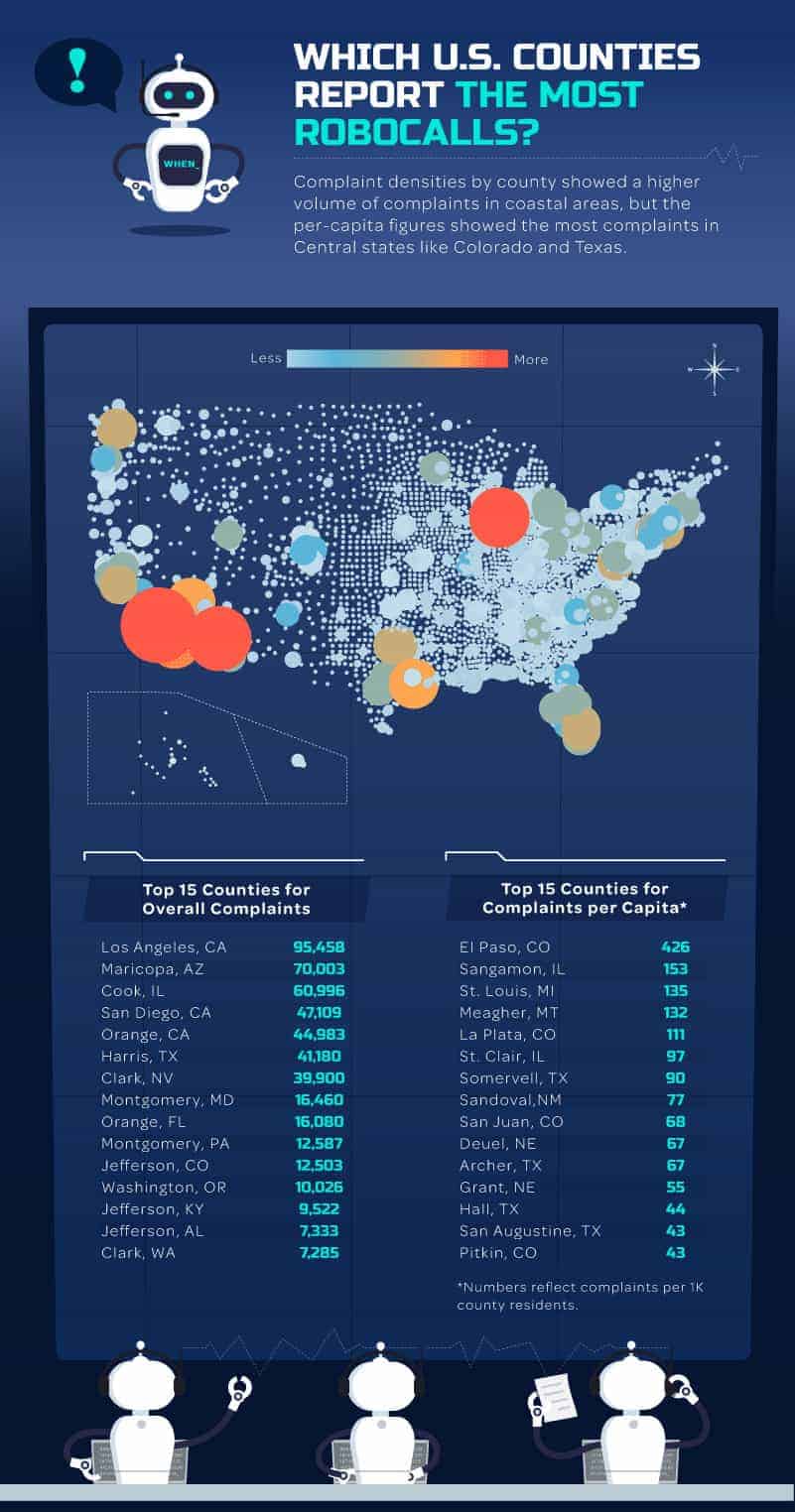 People all around the U.S. might be getting harassed by spam robots, but not everyone is keen on going the extra step to report it. We analyzed FTC data to see which parts of the country were most likely to register a complaint.

Los Angeles, California, was the leading county when it came to the sheer count of robocall complaints with over 95,458 recorded in 2018. Citizens in Maricopa, Arizona; Cook, Illinois; and San Diego, California, didn’t seem too happy either – in each of these counties, more than 47,000 people complained about robocalls. However, when it came to the most complaints reported per capita, El Paso, Colorado, lead the pack, followed by Sangamon, Illinois, and St. Louis, Michigan.

Robocalls are causing Americans to download call-blocking apps, seek revenge on spammers, and even avoid the phone altogether. Perhaps no headline sums up much of the populace’s frustration than that of The Washington Post: “Die, Robocalls, Die.” But even so, robocalls are becoming an increasing part of our everyday reality in this highly automated world.

We examined data from the FTC to uncover the mysteries of where and why this is happening and what we can expect on the phone. Our analysis uncovered the sheer prevalence of robocalling and the possible uptick in dissatisfaction as more citizens report these spam calls.

To learn more about the tech of our time and how it could affect your life, visit Comparitech.com.

The data utilized for this study are public and readily available on the FTC’s website. Two types of data were used for this deep-dive on robocalls. First, the FY 2018 Data Book was used. Second, the daily data log of the last six weeks, spanning March 30 to May 10, 2019, of the Do Not Call Reported Calls Data was used. In most cases, the data were filtered for robocalls only, as live call data were often provided as well.

Robocalls can be overwhelming, and many people don’t know just how common they are or that there are resources to help. If you wish to share our report with those who would be interested and it is for noncommercial purposes, we ask only that you link back to this page so that our authors can be properly credited for their work.