Which government censors the tech giants the most? 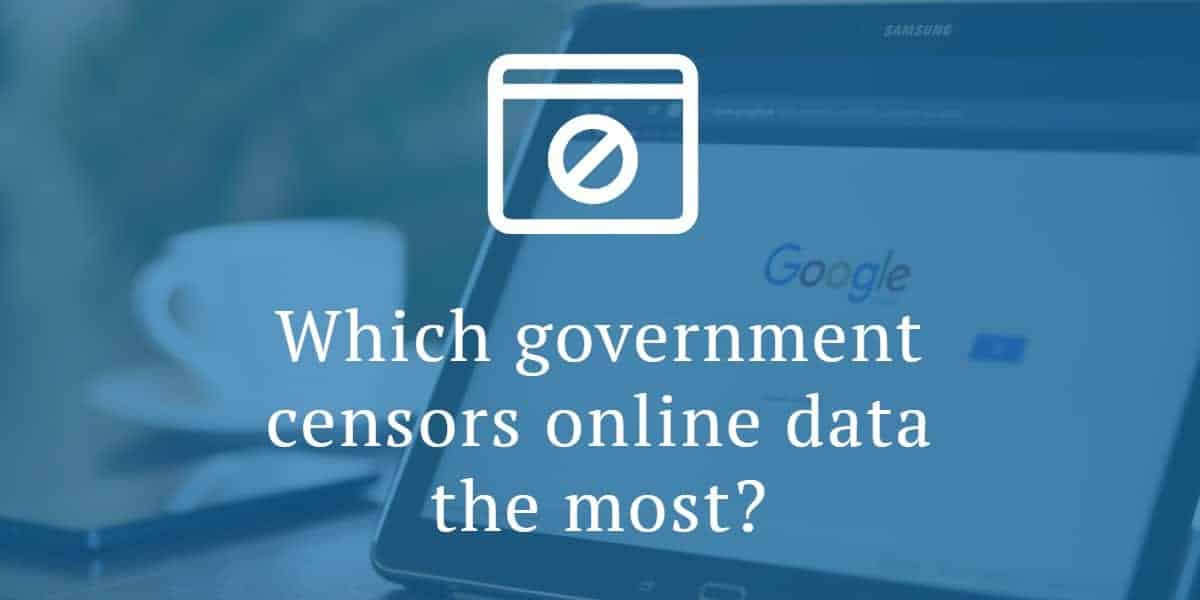 In 2009, Google started recording the number of content removal requests it received from courts and government agencies all over the world, disclosing the figures on a six-month basis. Soon after, several other companies followed suit, including Twitter, Facebook, Microsoft, and Wikimedia.

Here at Comparitech, we’ve collated all of this data to find out which governments censor online content the most and which channels are targeted by each government.

Some governments avidly try to control online data, whether this is on social media, blogs, or both. And surprisingly, China only features in the top 10 for one category. Find out why below.

Below are the top 20 countries based on their overall number of content requests across all channels.

However, these two countries don’t always dominate the top spots across all channels, as we can see below.

Below are the top 20 countries by the number of requests put through to Google from July 2009 to July 2018.

Turkey and the United States also put in a high number of requests, making up 9 percent and 6.91 percent of the overall requests received, respectively.

What kind of content removal requests is Google receiving?

Google also provides information on the reason behind each government request and the product involved (please note: Google only started tracking this from July 2010).

Blogger.com, web searches, and YouTube are all prime targets for these removal requests.

Which year saw the most Google content removal requests?

Despite this big increase, this wasn’t Russia’s biggest year for content removal requests. This came in 2017 when it made 23,823 requests (an 80 percent increase year on year). Again, national security was a top priority here, making up nearly 70 percent of its overall requests. Furthermore, within the first six months of 2018, Russia had made 19,192 content removal requests, suggesting that when Google releases the remaining figures for last year, there will be an even bigger increase in these figures.

This is also true of the overall number of content requests as 2017 was the biggest year for these with 35,793 requests in total. And by June 2018, there had already been 25,534 requests made.

Below are the top 20 countries by the number of requests put through to Twitter from January 2012 to July 2018.

These requests cover the legal demands to remove content received by Twitter. They do not cover requests by government officials based solely on Twitter Rules because the report does not offer a country-by-country breakdown for those.

Below are the top 20 countries by the number of requests put through to Facebook from July 2013 to December 2018.

Oddly, the US doesn’t feature here at all. The report suggests a country might not make the list either because Facebook’s services aren’t available there or there haven’t been any items of this type to report. The US doesn’t fall into the former, but the latter doesn’t seem likely either, especially when you consider the United States’s removal requests across other platforms. Furthermore, there is a case study (like the ones depicted below) for the US, which suggests:

“We received a request from a county prosecutor’s office to remove a page opposing a county animal control agency, alleging that the page made threatening comments about the director of the agency and violated laws against menacing.” Facebook reviewed the page and found there to be no credible threats so it, therefore, didn’t violate their Community Standards. (Oct 2015)

The largest increase in the number of content removal requests on Facebook came in 2015: a 313.37 percent increase over the previous year from 18,481 to 76,395. France made the biggest number of requests in 2015, accounting for nearly 50 percent of all the requests. As we can see from the example above, it’s highly likely most of these related to the terrorist attack in France as the majority of these requests were made in the second half of the year (the attack occurred in November 2015).

Below are the top 10 countries by the number of requests put through to Microsoft from January 2015 to December 2018. As only 19 countries in total made requests to Microsoft since they started reporting in 2015, we have only created a top 10 list here.

Unfortunately, Microsoft doesn’t offer any examples relating to the requests it receives.

Which year saw the most Microsoft content removal requests?

The biggest jump in removal requests on Microsoft came in 2016 when there was a 300 percent increase on the year before. The majority of these requests (418 or 62%) came from China. However, it was in 2018 when China made the most requests (1,645 in total – 44% of its overall requests since Microsoft began reporting).

Furthermore, despite a dip in the number of removal requests in 2017 (a drop of nearly 18% from the year before), there was a significant increase (56%) again last year.

Below are the top 20 countries by the number of requests submitted to Wikimedia from July 2012 to December 2018. Wikimedia’s transparency reports cover all content removal requests received, including those from individuals and companies, not just governments.

What is particularly interesting about these Wikimedia content removal requests is that they are hardly ever actioned. According to the report, the only content removal request accepted was from Ukraine in 2014.  A blogger included a photo of his visa to visit Burma/Myanmar on his website. He had scrubbed his personal details from the image. The same picture later appeared on English Wikipedia in an article about the country’s visa policy. The redactions were removed and his information exposed. Given the nature of the information and the circumstances of how it was exposed, Wikimedia granted the takedown request.

*“Unknown” countries made up 580 of the content removal requests so should be in second place instead of Germany. However, as we don’t have any indication as to what these countries are and cannot compare them, we have omitted them from the top 20 but not from the overall counts.

What kind of content removal requests is Wikimedia receiving?

Which year saw the most Wikimedia content removal requests?

While India takes the top spot for the overall number of content removal requests, as we have seen, the majority of these come from Facebook. Therefore, while the Indian government is clearly censoring Facebook (and is actively censoring other platforms, too), other countries appear to be censoring in larger volumes across all platforms.

These are Russia, Turkey, and France – those in second, third, and fourth place in our overall top 20.

Turkey only seems to drop out of the top four when it comes to Microsoft removal requests (12th) and Wikimedia removal requests (18th), coming second in the Google rankings, top in the Twitter standings, and fourth for Facebook. Thanks to Google’s in-depth report and some of the examples offered by other platforms we can see that Turkey is largely concerned with defamation but also puts forward quite a few requests relating to obscenity/nudity and privacy and security.

France may be the biggest surprise here as it isn’t necessarily regarded as a “politically controlling” country. It ranks 25/100 in the Freedom on the Net rankings and is thought of as being “free” with a 6/35 score for its limits on content. In comparison, Russia and Turkey rank 67th and 66th, respectively, with both being classed “not free”. Russia’s limits on content scored 24/35 and Turkey scored 25/35.

So why does the French government seem to be making so many content removal requests?

Again, if we refer back to the Google report and some of the examples, we can see that national security is a huge priority. Furthermore, we can see spikes in some content removal requests following the terrorist attacks in 2015. For example, France made 37,695 requests to Facebook in the July to December period of that year, a 12,677 percent increase on the first half of the year.

What about China’s lower rankings across every category but Microsoft?

China often does not bother with going through content providers and their in-house reporting mechanisms to censor content. It simply blocks entire sites and apps outright, forcing internet service providers to bar access on behalf of the government. China has banned all of the websites we have used in this comparison, except some of Microsoft’s services, so few censorship requests are required.