CCTV surveillance in the most populated cities in the United States 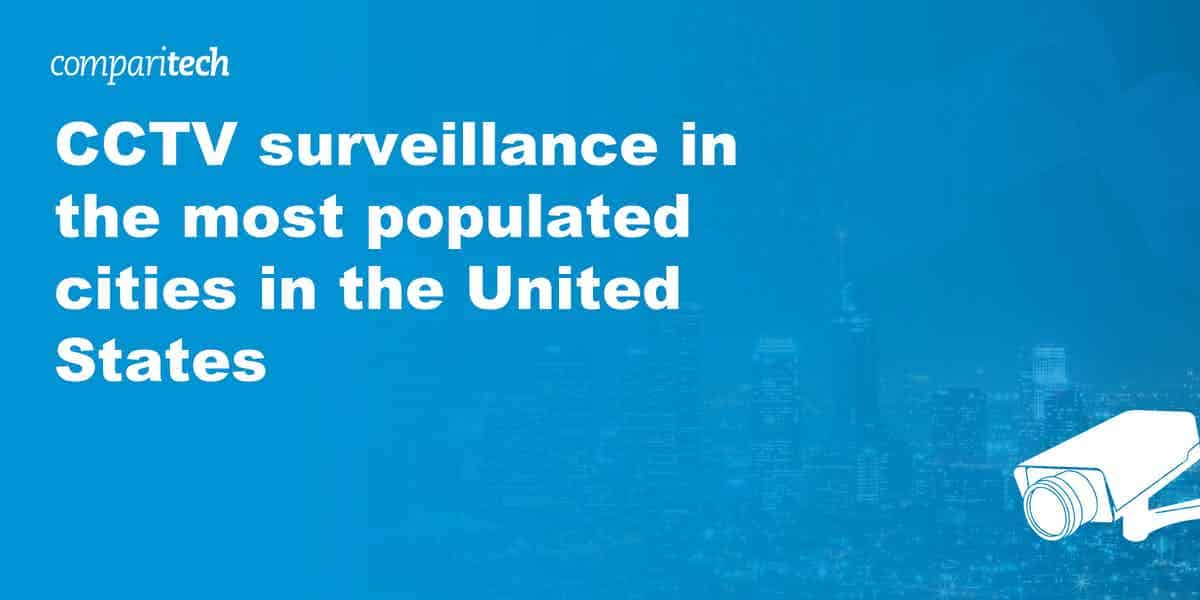 From monitoring traffic to preventing crime, closed-circuit television (CCTV) cameras have a range of purposes. But with increasingly-high resolutions, more remote access to live video streams, and the utilization of technologies like facial recognition and Ring doorbell cameras – just how much is too much when it comes to police surveillance?

To find out which of the top 50 most populated cities in the US are under the most surveillance, we looked at the number of fixed CCTV cameras, the number of cameras accessed through real-time crime centers, the number of private cameras within the police force’s network, cameras on public transport facilities, traffic cameras, and streetlight cameras. We also looked at whether or not the police department in question was utilizing Ring doorbell technology which gives them access to private cameras installed outside the public’s homes. However, these figures were not included in our totals due to unclear figures.

We were able to find data for 39 of the 50 most populated cities (based on Census.gov data), so these 39 are included in our analysis (to see which were omitted, please see the methodology section). Across these we found:

The 10 most surveilled cities in the United States

Based on the number of cameras per 1,000 people, these are the most surveilled cities in the United States:

*Some of the 12,800 cameras available to the Atlanta Police Department through its surveillance camera network include some of the cameras located at the airport. But it also includes public CCTV, as well as school district cameras, traffic cameras, and private cameras shared with the police department. However, even if we only counted the 12,000 in the public transport network (removing the 12,800 within the police’s surveillance network), Atlanta would still be the worst city for surveillance with 23.68 cameras per 1,000 people.

How does Atlanta compare to cities around the world?

To see all of the camera figures, sources, and limitations, visit this spreadsheet.

Please note; San Antonio is the seventh most populated city but has been omitted due to lack of data.

One of the most common arguments for the installation of CCTV cameras is to increase public safety and reduce crime rates. We compared the number of public CCTV cameras with the crime indices reported by Numbeo, which are based on surveys of that site’s visitors.

As you can see from the above chart, there is hardly any correlation between higher camera figures and lower crime indexes. Broadly speaking, then, crime rates aren’t reduced by having more cameras in place.

Comparitech researchers collated a number of resources to get an estimate of the number of public CCTV cameras in use. We focused on the United States’s 50 most heavily-populated cities but omitted any city where we couldn’t find enough data.

Where possible, we have only included public CCTV cameras, including cameras installed on public buildings, cameras used by law enforcement, cameras installed on public transport, and traffic cameras with surveillance capabilities (i.e. automatic number plate recognition). However, in some instances, it may not be clear what cameras are included, meaning some private camera figures may also be included in the totals. We believe airport figures may also be included in Atlanta’s figures. Some transport cameras may also be located outside of the city limits but we have removed any where we feel this to be the case.

Most of the data sources used are from the last few years but, in some cases, only older data sources were found. The dates of the sources are listed in the spreadsheet linked above.