The Russian government restricts access to the internet, preventing users from visiting certain sites and webpages. We reveal which sites may be blocked in Russia so you know what to expect.
Aimee O'Driscoll VPN AND CYBERSECURITY EXPERT 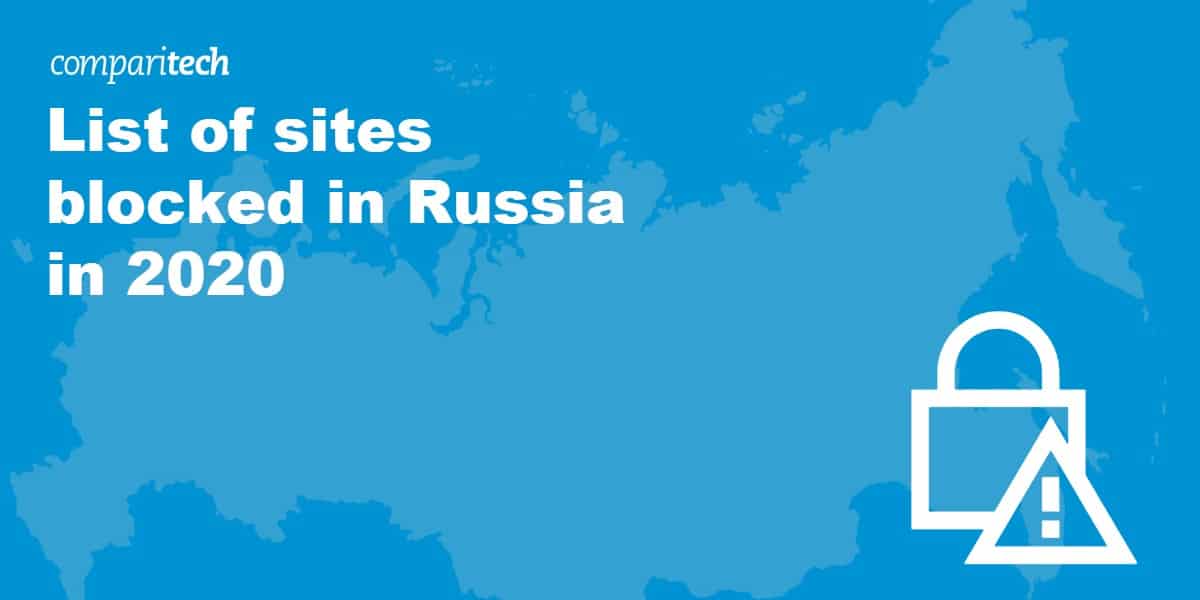 If you’re living in or visiting Russia, you’ve no doubt discovered that many websites and apps are blocked in the country. The list of blocked sites is liable to change on any given day, and sometimes only certain pages of sites are blocked. In 2019, research by internet freedom advocates Roskomsvoboda found that there were almost 440,000 incidents where individuals were confronted with some type of block while trying to access online content.

While the Russian government defends its actions, there are many critics of the restrictions. According to Human Rights Watch:

“Legislators have justified these rules by citing a need to protect state security, the Russian internet, and the privacy of Russian users. In reality, these requirements facilitate mass censorship and blanket surveillance, introduce non-transparent content-blocking procedures and endanger the security and confidentiality of people’s communications online”

No matter the reasons behind the blocks, not having access to your regular sites and apps while in Russia can be frustrating to say the least. In this post, we discuss which sites have been banned in Russia so you can have an idea of what to expect.

Which websites are blocked in Russia?

Many of the website blocks in Russia are unpredictable. There may be seemingly empty threats of blocks for years followed by swift overnight shutdowns. Sometimes sites or apps are blocked for unknown reasons and one site may be penalized for breaking the rules while similar sites aren’t.

That said, there are some standard blocks you can expect. For example, Russia was strict about access to online gambling in the first half of 2020. Almost 35,000 sources violating gambling and lottery legislation were blocked. You can also expect widespread blockages on content related to extremist activity, pornography, suicide, drugs, and alcohol.

Here is a list of some of the most popular sites blocked in Russia:

It’s important to note that even if a domain is accessible in Russia, this doesn’t mean you’ll have access to all content within that domain. For example, you might be able to access some betting sites in Russia, but due to regional restrictions, you may not be able to use your accounts or some specific features. Similarly, while you can access most streaming platforms from within Russia, due to licensing restrictions, you might not be able to stream all the content you would back home.

Here is a rundown of some of the major sites and apps that have experienced blocks or threats of blocks by the Russian government.

While these haven’t been blocked in Russia, there have been threats to that extent. In 2019, the Internet Protection Society warned that blockages against Facebook, Instagram, and YouTube, were being prepared by Russia’s Federation Council. It was reported that a gradual and carefully calculated block would commence and be in full effect by the start of 2021.

While there is still no real sign of even partial blocks, the groundwork may be being laid. For example, in early-2020, both Facebook and Twitter were given fines by the Russian government for failing to comply with the country’s data retention laws. According to those laws, data on Russian users should be maintained on servers located within Russia.

It was previously reported that the companies would be given until October 30, 2022 to comply with the rules, but in October 2020, the government revealed that this extension will not be granted to sites like Twitter and Facebook.

The same data retention laws discussed above were applied when LinkedIn was blocked entirely in late 2016. At the time, there were around six million Russian users of the service. LinkedIn tried to negotiate but in 2017, Russia reiterated that it would not be lifting the ban. LinkedIn is still blocked in Russia.

TikTok hasn’t been banned in Russia, but the app is censored. In September 2020, the Chinese-owned company admitted it took down over 700 videos in the first half of 2020, 300 of those at the request of the Russian government.

The information was disclosed in TikTok’s transparency report, although the reasons behind the removal of the videos were not provided.

Popular instant messaging app Telegram was banned in Russia for over two years. The ban is currently lifted but this may not be the end of the matter.

Russia first banned Telegram in April 2018 when the company refused to share its encryption keys with Roskomnadzor, the country’s telecom watchdog. Handing over the keys would have been in line with Russia’s anti-terrorism laws, providing the Russian government access to users’ private encrypted messages, something Telegram simply wasn’t willing to do.

While the ban was in place, the efforts made to implement it proved messy. Users found ways to circumvent the ban such as through anonymizers and VPNs, and in turn, the government devised ways to block those methods.

Ultimately, Telegram said it improved its tools for combating extremist content. Roskomnadzor acknowledged the company’s willingness to assist in counterterrorism efforts, and the ban was lifted in June 2020.

ProtonMail was the subject of a Russian block in January 2020. This service offers end-to-end encrypted email and is popular among privacy enthusiasts including activists and journalists.

The block was implemented because the ProtonMail service had been used to send bomb threats. The email provider didn’t provide authorities with information about the users associated with the accounts the threats originated from.

ProtonMail argued its case to Russian authorities, noting that any would-be perpetrators could simply circumvent the ban with a VPN or use another provider to send similar threats. The ban was lifted fairly quickly, with most users regaining access after a couple of days.

Netherlands-based StartMail was subject to the same block. While the provider has pleaded its case, the block on StartMail remains in effect.

Want to trade cryptocurrencies in Russia? You may have a hard time. Indeed, it’s difficult to keep track of the intermittent blocks of various crypto-platforms.

Peer-to-peer trading platform LocalBitcoins has been blocked a couple of times in the country, first in 2016, and again in October 2020. There was also a threat to block the service in July 2020. According to Roskomnadzor, the reason for the block is that the site spreads illegal information.

There are many examples of politically-motivated blocks in Russia such as those imposed on opposition websites (including net2020.ru) and independent media outlets (such as the site of news agency Fergana).

In June 2020, a European rights court found Russia at fault for thwarting freedom of expression. Four separate cases related to various websites, including Garry Kasparov’s opposition website (kasparov.ru) resulted in Russia having to pay damages of €10,000 ($11,708) to each applicant.

Tor, TON, and others

Aside from blocking sites, Russia is also cracking down by trying to prevent users from accessing the internet via platforms that are resistant to censorship. This includes anonymizing networks such as VPNs (more on those below) and the Tor (The Onion Router) network. Other networks Roskomnadzor is looking to target include Telegram’s Open Network (TON), Freenet, Invisible Internet Project (I2P), and Zeronet.

It’s unclear how exactly the government aims to do this but a March 2020 notice called for contractors to help with researching and blocking the networks.

The topic of VPNs represents a legal grey area in Russia. In 2017, Russia banned VPNs to “prevent the spread of extremist materials and ideas.” However, the ban doesn’t prohibit their use entirely but rather their use to access illegal content. That said, many VPN websites are blocked in Russia. In spite of the ban and blocks, VPN providers continued to operate servers inside Russia.

That changed quite quickly in 2019 when the Russian government demanded VPN providers comply with data retention laws and provide access to any servers located in Russia. The reason provided was to prevent access to illegal content but handing over server access would also cause major privacy concerns to VPN users. Targeted VPNs included ExpressVPN, Hide My Ass!, Hola VPN, IPVanish, Kaspersky Secure Connection, NordVPN, OpenVPN, TorGuard, and VPN Unlimited.

Refusing to hand over data about their users, many VPNs (including NordVPN) shut down their Russian servers. Now only a handful of VPNs still run servers in the country and enable you to get a Russian IP address. However, many VPNs still work there.

Disclaimer: The contents of this article are not intended to constitute legal advice. We aim to provide you with the most accurate and up-to-date information, but these situations are fluid and liable to change. We do not condone or encourage the use of VPNs or proxies to access content illegally. It’s recommended you consult your country’s local laws for the most accurate information.

Is the internet banned in Russia?

Because of strict internet censorship in the country, many people are under the impression that access to the world wide web is banned in Russia. As of now, this is not true. Aside from many sites being blocked, the internet experience in Russia is fairly similar to that in the rest of the world.

That said, this may not always be the case. In late 2019, Russia announced it had successfully tested an “alternative to the global internet.” This project involves blocking or regulating the points where the Russian internet connects to that of the rest of the world.

Is there Google in Russia?

Yes, Google is available in Russia, although it’s not as popular there as in the rest of the globe. There has been lots of back and forth between Google and the Russian government on various issues, including many examples of Google complying with Russian demands.

Even though it’s accessible in Russia, Google usage is small in comparison to that of Russia’s homegrown search engine Yandex. Similar to Google, Yandex offers a ton of other services including cloud storage, email, music streaming, online payments, maps, news aggregation, and more.

Many users are concerned about their privacy when using a service like Yandex, although the same could be said for Google and similar companies. If you’re looking for a private search engine, there are many alternatives to consider.

Is Gmail available in Russia?

Like Google search services, Gmail is available in Russia. However, it may not be the most popular email service provider, with companies like Mail.ru and Yandex having more users as of 2017.

While VPNs were banned in 2017, there isn’t actually a Russian law that makes them illegal. Indeed, there is a list of “recommended VPNs” provided by the Russian government. That said, you could still be fined for using a VPN in the country or providing VPN services there.