In this article, we'll show you the best VPNs for getting a Russian IP address so you can watch Russian TV channels abroad, such as Russia 1, Match TV and unblock other popular streaming services.
Mark Gill TECH JOURNALIST, VPN AND PRIVACY SPECIALIST 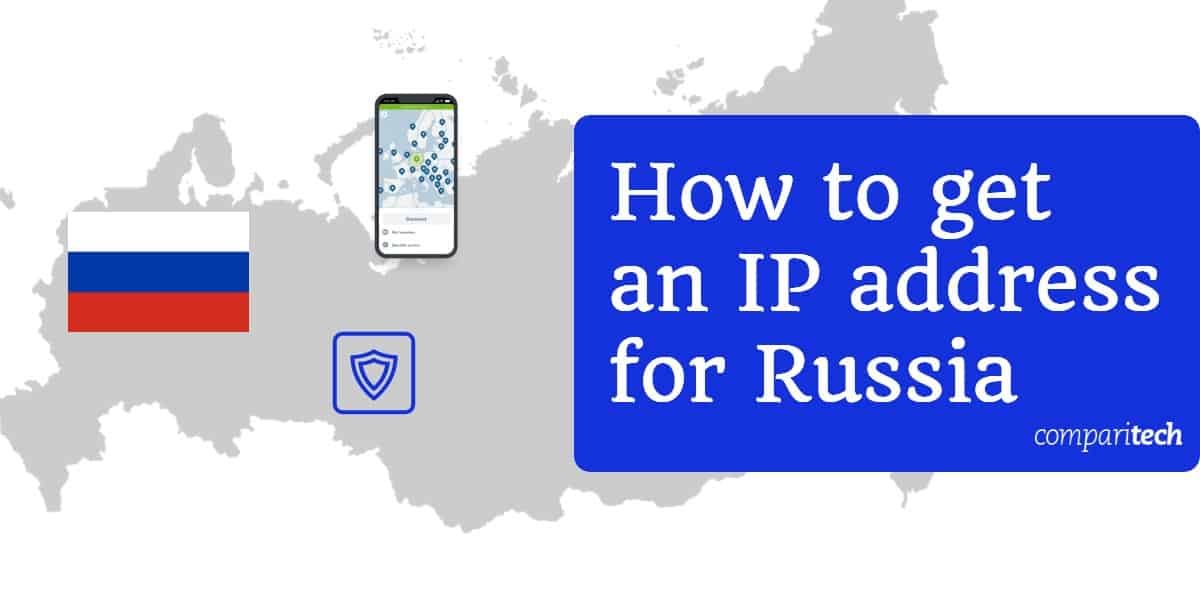 In order to obtain an IP address for Russia, you’ll need a VPN. Short for “Virtual Private Network”, a VPN encrypts your device’s incoming and outgoing traffic and routes it through one of the VPN servers (in this case a Russian server). This hides your true IP address and location, making it appear you’re browsing the web from Russia. This means you can access geo-restricted Russian content and TV from outside Russia.

How to get an IP address for Russia

The process of getting an IP address for Russia is the same as with any other country.

Here’s how to get a Russian IP address:

If you don’t have time to read the full article, here’s a quick summary of the best VPNs to get a Russian IP address:

In 2017, it was reported that President Vladimir Putin planned to ban VPNs in Russia. The aim of this was to prevent Russian citizens from accessing prohibited websites. The news led some VPN providers to remove Russian VPN servers, due to concerns over new data retention laws. It’s for reasons such as this that choosing a Russia VPN can be challenging.

We’ve carried out research in order to find the best VPNs to get an IP address for Russia.

For a VPN service to be considered, it had to meet the following requirements:

The best VPNs to get a Russian IP address

Surfshark is a newer VPN that ticks many boxes. It has over 800 servers in more than 50 countries, including Russia. In our testing of this VPN service, we found it to offer respectable speeds and we were able to unblock and stream Netflix, BBC iPlayer, and Hulu. We didn’t encounter any issues of buffering or lag in our testing of servers. One of the standout features of Surfshark is that it allows an unlimited number of simultaneous connections, which is great for families.

We like the simplicity of Surfshark’s apps, which are quick and easy to navigate. This makes Surfshark an excellent choice if you’re new to using a VPN. Even if you do encounter a problem, you can contact Surfshark’s 24/7 live chat support. One of the key reasons to choose Surfshark for a Russian IP address is that it’s very secure. Based in the British Virgin Islands, this VPN isn’t subject to data retention requirements. Aside from a no logs policy, Surfshark uses 256-bit AES encryption, DNS leak protection and a kill switch.

UNLIMITED CONNECTIONS:Surfshark can be used on unlimited devices simultaneously. It has great security but does have a smaller network of servers. 30-day money-back guarantee.

PrivateVPN is one of the fastest VPNs we’ve tested. A smaller VPN service headquartered in Sweden, it has a network of approximately 100 servers in 60 countries, one of which is in Saint Petersburg, Russia. PrivateVPN’s speed and ability to unblock services such as Netflix and Amazon Prime Video make it a great option for streaming. It’s also well-suited for technophobes thanks to the user-friendly desktop and mobile apps and presence of both ‘simple’ and ‘advanced’ menus.

With PrivateVPN, you can connect up to 6 of your devices simultaneously, all of which can be assigned unique IP addresses. Customer support is available and although the live chat feature isn’t available 24/7, responses are usually quick and extremely helpful. PrivateVPN is a safe VPN to use whether you’re in Russia or abroad. That’s because it has a zero logs policy and uses 256-bit AES encryption to protect your data. It also offered DNS leak protection and a built-in kill switch.

HIGH-SPEED STREAMING:PrivateVPN is fast, which makes it great for streaming Netflix. Its apps are easy to use and it has a zero logs policy. 30-day money-back guarantee.

VyprVPN is a service that prides itself on providing users with plenty of choice. Aside from offering over 700 servers around the world and unlimited server switching, VyprVPN provides more than 200,000 IP addresses. Having tested VyprVPN extensively, we can say that servers are fast and we like that we’re not restricted by download caps and the like. We were able to unblock Netflix and Amazon Prime Video without any issues and overall performance was solid.

When it comes to security, VyprVPN owns and manages its servers. This is in contrast to many VPNs which merely rent their servers from third parties. Headquartered in Switzerland, VyprVPN has been independently audited to prove it’s a no-logs VPN. This is great if you’re concerned about your privacy online, particularly in Russia where censorship and surveillance are an issue. VyprVPN uses 256-bit AES encryption, provides DNS leak protection and a kill switch. Overall, it’s one of the more secure VPNs you can use.

VyprVPN apps are available for Windows, Mac, Android and iOS. Manual setup is needed for Linux and routers.

SaferVPN has a smaller network of approximately 700 servers in 34 countries. However, this includes servers in Russia. It offers fast servers for browsing, streaming, and torrenting. What’s more, this VPN is able to unblock many popular streaming services. This includes the likes of Netflix and BBC iPlayer. With SaferVPN, you get five simultaneous connections, allowing you to secure all of your devices.

This is a very simple service that makes it easy for anyone to connect to a server in Russia for a Russian IP address. The apps are easy-to-use while there’s also the option of browser extensions for added convenience. However, live chat and email support is available 24/7 should you need it. Security-wise, SaferVPN secures your data with 256-bit AES encryption, DNS leak protection, and a kill switch. What’s more, a no-logs policy helps you stay anonymous online.

SaferVPN can be downloaded for the following: Windows, Mac, Android, and iOS. Chrome and Firefox browser extensions are also available. Manual installation is required for Linux and routers.

BEGINNER-FRIENDLY:SaferVPN makes connecting to a server in Russia quick and easy thanks to its user-friendly apps and browser extensions. Unblocks Netflix and BBC iPlayer. 24/7 live chat support, up to five simultaneous connections, and a no-logs policy. 30-day money-back guarantee.

ZenMate allows you to connect to servers in Russia as well as countries such as the US, UK, and Australia. Overall it has a network of around 1,000 servers which are spread across 30 countries. This VPN is generally quick to connect and allows users to have up to five simultaneous connections. With this VPN, you can unblock some of your favorite streaming services including Netflix US.

One of the best things about ZenMate is that it can be used on a wide range of devices. Indeed, it’s one of the few VPNs to offer browser extensions for Chrome, Firefox, and Opera. It’s also worth noting that aside from a 30-day money-back guarantee, ZenMate offers a 7 day free trial without any need for signup. ZenMate’s security features include 256-bit AES encryption, DNS leak protection, and a kill switch. It also states that it keeps a strict no-logs policy, protecting your online privacy.

You can use ZenMate via the apps for Windows, Mac, Android, and iOS. There’s also browser extensions for Chrome, Firefox, and Opera. Linux and routers require manual setup.

7 DAY FREE TRIAL:ZenMate offers a 7 day free trial without the need for signup. It offers servers in Russia as well as the US and UK. Unblocks Netflix US. Connect up to five devices simultaneously via the beginner-friendly apps and browser extensions. 30-day money-back guarantee.

Unfortunately, a Russia VPN ban was announced in 2017. In an effort to prevent Russians from accessing restricted content, President Vladimir Putin signed a law banning VPNs in the country. As such, VPNs are not legal in Russia.

*Disclaimer: While we have researched this topic thoroughly, nothing in our article should be taken as legal advice. Our goal is to provide you with the best information and solutions. Comparitech does not encourage or condone using a VPN illegally. We advise researching your country’s laws and the terms of use for specific streaming platforms before using a VPN to access their content.

Why do I need a VPN for Russia?

Reporters without Borders listed Russia as one of its “Enemies of the Internet” in 2014. What’s more, Freedom House rated Russia’s internet as “Not Free” in Freedom on the Net 2018, scoring the country 67/100 (with 0 being the most free and 100 being the least).

Russian authorities have censored a wide range of online content. Notably, authorities blocked Telegram in April 2018 after the platform’s refusal to hand encryption keys to Russia’s Federal Security Service. In 2016, LinkedIn was blocked in Russia after a Russian court ruled it was in violation of the law regarding foreign-held data.

With authorities in Russia continuing to block websites (including those of VPNs) and even passing legislation that bans VPNs, it’s clear that internet freedom is severely limited in Russia. By obtaining a VPN for Russia, you can not only access geo-restricted websites, but you can also unblock government-censored content. The best VPNs for Russia also protect your privacy, hiding your IP address and activity from your internet service provider (ISP) as well as snoopers.

How can I watch Russian TV abroad with a VPN?

By using a VPN and connecting to a Russian server, you can watch Russian TV in any country as long as you have an internet connection. This is the case even if the content is geo-restricted and only otherwise accessible in Russia. If after connecting to a server you still encounter issues, try clearing your browser’s cookies.

Can I use a free VPN to get a Russian IP address?

While you can use a free VPN to get a Russian IP address, you may find it something of a challenge. That’s because free VPNs are usually of poor quality. Often with very few servers and too many users, they’re subject to all sorts of restrictions such as limited bandwidth. You’ll, therefore, find that free VPNs can be very slow and this makes streaming movies and TV shows quite irritating as there’s plenty of buffering and lag.

However, just as important as performance is security. Internet censorship and mass surveillance are present in Russia and this means a VPN is vital if you want to protect your privacy and anonymity in the country. Unfortunately, free VPNs aren’t very safe. Some free VPNs are infected with malware while others sell your data to third parties. This means it’s vital that you choose a VPN for Russia that has a strict no-logs policy.

Which websites don’t work in Russia?

While a Russian IP address can help you access websites and services outside Russia, it won’t be much help if you’re in Russia. That’s because many sites are blacklisted due to the high level of internet censorship in the country. You’d, therefore, need an IP address of another country (such as the US, UK or Australia, for example) in order to access them. 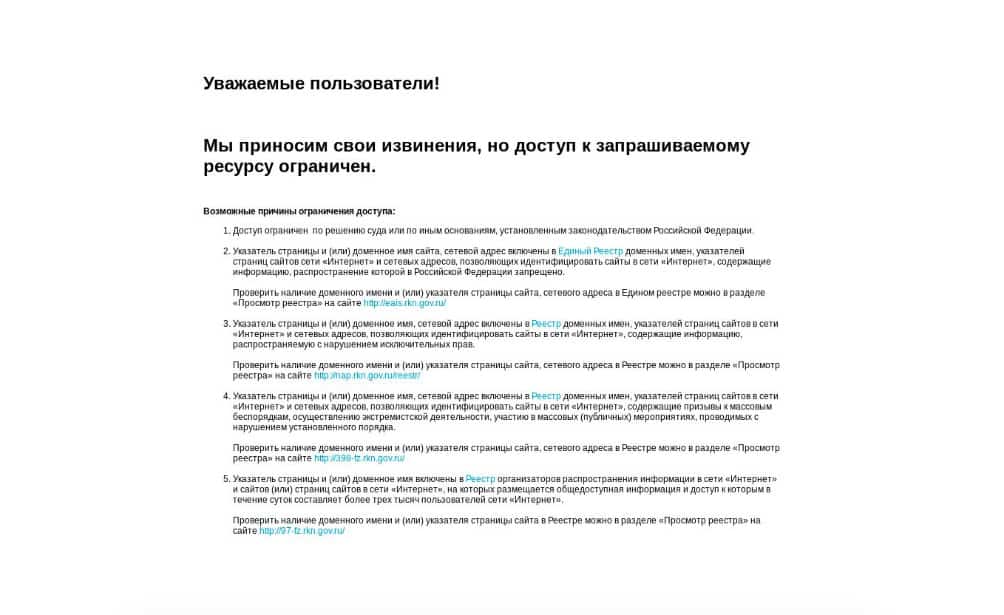 Should you come across a restricted site in Russia, chances are you’ll come across a page with a message that translates as: “Dear users, We apologize, but access to the requested resource is limited.” This is then followed with a list of possible reasons for the restriction.