Since 2018, ransomware attacks on healthcare organizations have cost the world economy $92bn in downtime alone 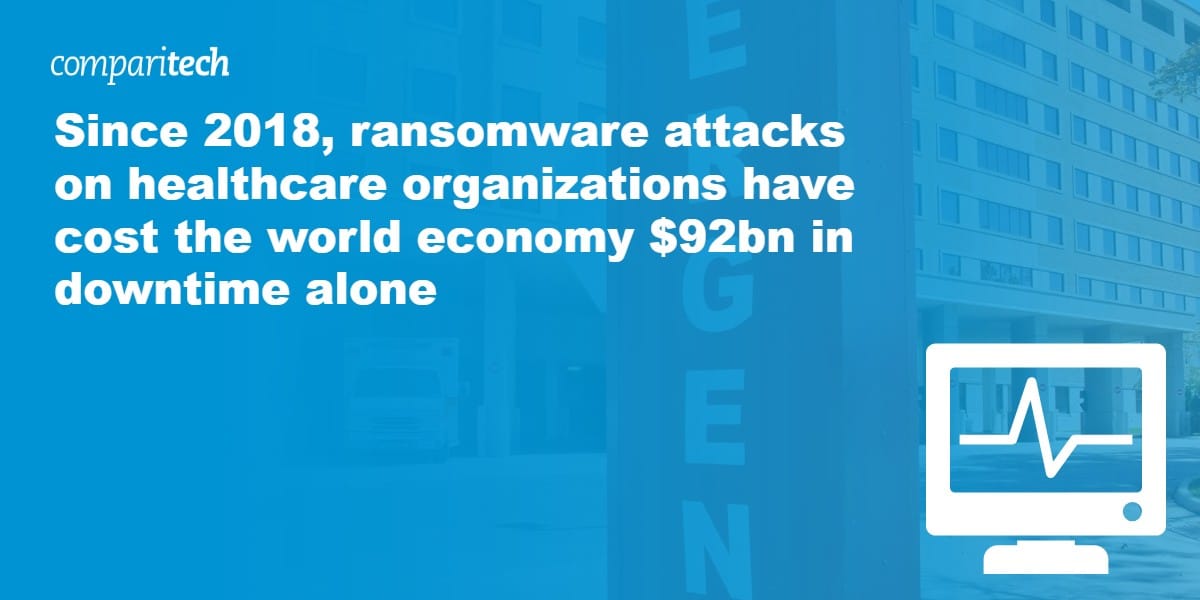 Since 2018, there have been 500 publicly-confirmed ransomware attacks on healthcare organizations around the world. These have crippled nearly 13,000 separate facilities and have impacted almost 49 million patient records.

In total, we estimate the cost of these attacks exceeds US$92 billion in downtime alone.

Ransomware attacks have the potential to cause widespread disruption to any organization. Not only can they encrypt key systems, they can put personal data at risk of theft and exploitation. Place this scenario in a healthcare environment, and the stakes are arguably much higher. Critical systems and patient data may become inaccessible, causing severe–and perhaps even deadly–delays. For example, a lawsuit in Alabama, due for trial this month, suggests a ransomware attack on a hospital led to a baby’s death in 2019.

Below, we explore the extent of ransomware attacks across healthcare organizations around the world. Using data from our worldwide ransomware tracker, our team explored the growing threat of ransomware in the healthcare sector and the true cost of these attacks. However, as we only include publicly-confirmed attacks, our figures likely only scratch the surface.

Note that just because a country may be denoted as having a higher number of attacks than others, this doesn’t necessarily mean it is more “targeted” by attackers. Rather, the awareness and reporting of such attacks may be more in-depth. For instance, data breach reporting tools and regulations in many US states help confirm these attacks. Those same tools and regulations don’t exist in many other countries.

Ransomware attacks on healthcare organizations by month and year

As we’ve mentioned above, 2021 was the biggest year for ransomware attacks on healthcare organizations, accounting for just over 33 percent (166) of all the attacks since 2018. 2020 was also a big year, with 137 attacks noted in total.

Both of these years coincide with the COVID-19 pandemic. With healthcare organizations stretched and under pressure, hackers found ways to exploit weak points, such as tired staff members failing to spot phishing emails containing ransomware.

2022 has seen a dip in healthcare ransomware attacks with 83 noted up until the end of October. While lower, we would expect this figure to rise in the coming months as some attacks are reported months after they have taken place (e.g. when data is published by the hackers or breach notifications are issued to affected patients).

The true cost of ransomware attacks on healthcare organizations

Ransom demands can vary considerably with our figures finding ransoms as low as $900 (disclosed by the Centre Hospitalier de la Tour Blanche à Issoudun in France in its 2019 attack) and as high as $20 million (revealed by Ireland’s Health Service Executive in its 2021 attack). Understandably, many organizations don’t reveal the amounts demanded–especially when they’ve paid the hackers.

We found ransom figures in 40 cases. As well as the HSE one mentioned above, some other large figures were disclosed by:

Based on the figures we do have available, we know:

The above shows us how ransom demands have skyrocketed in recent years. There also appear to be fewer confirmed ransom payments. However, as the awareness around ransomware has grown, companies are likely keeping schtum on what the ransom demand was and whether or not they’ve paid it. Many believe that admitting to paying ransoms leaves them open to further attacks.

This is reflected in the fact that no paid ransom amounts were revealed in 2021 and only one has been revealed in 2022: just over $2 million was paid by Colosseum Dental after hackers wreaked havoc with the systems across over 130 branches across Luxembourg, Belgium, and the Netherlands.

While calculating the cost of ransomware attacks through ransom payments is difficult, there is one aspect from these attacks that is easier to gauge–downtime.

In many cases, ransomware attacks render systems inaccessible for hours, days, weeks, and even months at a time. And in some of the worst cases, systems are completely unrecoverable.

As we have seen above, we were able to find downtime figures for 140 entities. The number of days lost to this downtime was 2,174. Using the averages from these attacks, we were then able to estimate the downtime for all of the known ransomware attacks, calculating that a total of 7,381 days have been lost to downtime on healthcare organizations around the world. This equates to more than 20 years.

In a 2017 study, the average cost of downtime per minute across 20 different industries was estimated to be $8,662. This would therefore mean that healthcare organizations have suffered costs of over $92 billion as a result of downtime alone.

Even though these figures may seem astronomical, they do reflect some of the figures disclosed by healthcare organizations after they’ve been attacked.

For example, Ireland’s Health Service Executive just revealed that it’s spending $2.1 billion to upgrade its IT systems following the attack.  Elsewhere, the 2021 attack on Scripps Health in the US cost over $112 million.

Even though 2022 has seen a dip in the number of ransomware attacks on healthcare organizations, this doesn’t necessarily mean that the threat is any less severe. We’re seeing growing ransom sums and downtime figures. Hackers are perhaps becoming more targeted in their approach, ensuring widespread disruption is achieved so as to increase their chances of receiving the ransom.

Furthermore, there are increasing “double-extortion” attacks in which systems are encrypted and data is stolen. Even if an entity is able to restore its systems quickly from back-ups, the threat of private patient data being published online may still be enough for the company to negotiate with the hackers. And even if a company refuses to pay the ransom demand, the sale of this data can lead to a hefty profit for the hackers.

Another reason for the lower ransomware attack figures (something we’re seeing across all industries in both the US and worldwide), is that organizations are becoming less “open” about being attacked. As people become more aware of ransomware attacks, entities appear to have become less forthcoming in their reporting of such events. This is perhaps due to the stigma surrounding ransomware and also the concern it leaves them open to future attacks.

Using the database from our ransomware attack map, our research found 500 healthcare ransomware attacks in total. From this data we were able to determine ransom amounts, whether or not ransoms were paid, and the downtime caused.

If no specific figures were given for downtime, i.e. “several days,” “one month” or “back to 80% after 6 weeks” were quoted, we created estimates from these figures based on the lowest figure they could be. For example, several days was calculated as 3, one month was calculated as the number of days in the month the attack happened, and the number of weeks quoted in % recovery statements was used (e.g. 6 weeks per the previous example).

Each breach was categorized into one of 17 medical organization types, which are defined as follows: