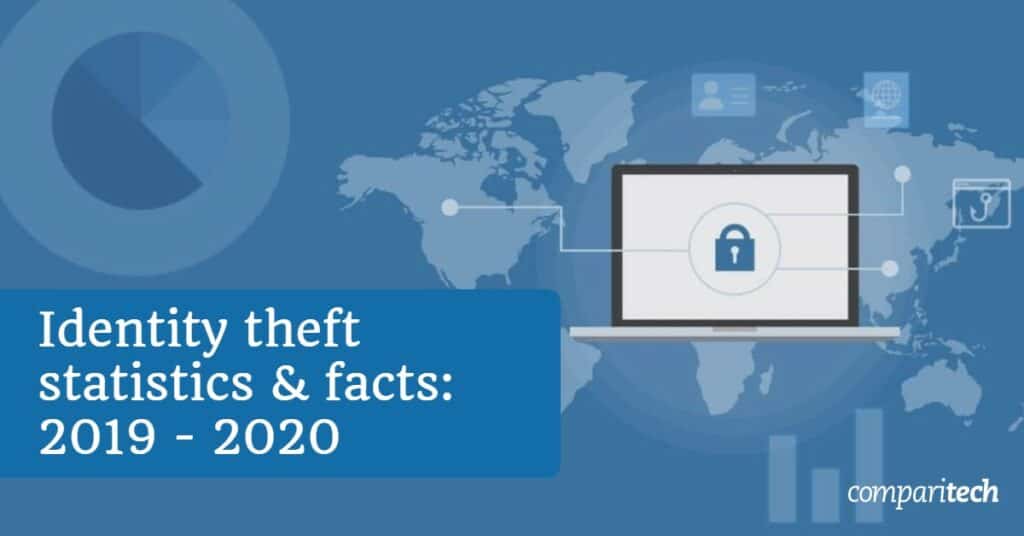 *This list is regularly updated with the latest identity theft statistics for 2019 – 2020 (plus a few earlier stats thrown in). To date, we have compiled over 30 identity theft facts, figures and trends from a wide range of sources and covering a number of different countries.

As the world continues its relentless march toward all things digital, the reams of data we’re uploading to the web are increasingly exposed. Each individual consumer’s personal information now resides on hundreds, if not thousands of servers across the globe. With that fact comes a somewhat obvious result: an increase in identity theft.

Additionally, Javelin Strategy found that children are increasingly the victims of identity fraud. While children have long been a target for Social Security Number misuse and credit card fraud, it appears the impact is growing. The security firm found that over 1 million children were ID theft victims in 2017.

Identity theft statistics have taken center stage among the many stats and facts encompassing the entire realm of cybercrime. While ransomware gains more attention, identity theft remains much easier to pull off and monetize. Social security numbers, credit card numbers, and other personal identity factors can be stolen and sold on the dark web, or used by criminals for quick and easy profit gain.

The following identity theft statistics are categorized to help get a better feel for how and why this threat continues to be a problem for consumers, businesses, and governments worldwide.

1. There were over 9,600 reported data breaches in the US between 2008 and 2019, which help contribute to identity fraud

Alongside the 9,600 reported data breaches in the US between 2008 and 2019, there were over 10 billion records stolen during that time frame. The numbers reveal that contrary to efforts to stem the tide of data theft, thieves are learning new ways to bypass protections. Consumers now face an increased risk of data theft.

Even as the overall number of fraud incidents fell between 2018 and 2019, the total amount of money lost to identity fraud was on the rise. Fraud losses in 2019 hit $16.9 billion last year.

4. Consumers hit with $3.5 billion in losses due to fraud

Javelin Research found that fraudsters are fast in their efforts to take over accounts. The company’s 2020 research on identity fraud reports that 40% of takeovers happen within 24 hours of a criminal’s access to a victim’s account.

7. The overall decline in fraud events is likely due to EMV chip credit cards

The decreasing number of fraud events is highly evident of the impact of EMV chip-based credit cards, which cannot be copied by card skimmers. EMV chip adoption in the US was slow, but by 2018, over 60% of merchants had POS systems in place to accept the chips, while every major card issuer had already switched to delivering cards with EMV chips.

8. Stolen credit card data is often sold on dark web marketplaces for as little as $0.50 per card

Although the cost of losing credit card information can be extensive, those selling that data on the dark web often do so at incredibly low prices. Symantec found single credit cards priced as low as $0.50, and some as high as $20 each. Cards with full details, including CCV numbers, were more commonly twice as expensive, and often run between $1 and $45 per card.

Data from skimmed magnetic is often the most expensive card data on the dark web. The asking price for those can range from $5 to $60 or more.

9. Most people in the US know someone an ID theft victim

Around 10% of Americans have been a victim of identity fraud, 21% of whom have been victimized more than once. Those numbers indicate that if you live in the US, you have likely been a victim of ID theft or known someone who has (whether they’ve admitted to it or not).

In 2017, Cifas announced that identity fraud in the UK is reaching „epidemic levels“ with fraud incidents occurring at a rate of 500 per day. According to Fraudscape’s annual report, things only got worse in 2020, with over 130,000 cases of identity theft reported.

Losses associated with account takeovers decreased from $5.1 billion down to $4 billion by the end of 2018.

11. An average of 4,800 websites are compromised with formjacking code each month

A comparatively new type of cyber attack, formjacking consists of hackers injecting malicious Javascript code that scrapes personal information submitted onto a website via website forms. Once a user submits that information, the malicious code collects and transfers that data to another server.

In its 2019 Internet Security Threat Report, Symantec noted that it detected and blocked 3.7 million formjacking attempts in 2018. This technique seems to be working for hackers, though, since in Q1 2020, Symantec found 7,836 compromised websites, up from 7,663 the previous quarter.

13. Millennials accounted for 33% of US identity fraud reports

Equifax also confirmed that Millennials were prime targets for fraudsters. According to Equifax Canada, nearly half of all suspected fraud applications are for those between the ages of 18 and 34.

14. Identity scams were the most commonly reported scam in the US in 2019, followed closely by imposter scams

The 2019 FTC Consumer Sentinel Data Book reveals that identity fraud accounted for the largest share of fraud reports to the FTC, accounting for 20.33% of all reported scams last year. Imposter scams were a close second, with 20.31% of all scam reports fitting into one of the five types of imposter subcategories the FTC monitors.

15. Social media users are a high-risk group for ID theft

Those who use social media are among the most likely to experience fraud. Javelin Strategy found that individuals who have an active social media presence had a 30 percent higher risk of being a fraud victim than those who weren’t active.

People who use Facebook, Instagram, and Snapchat were particularly vulnerable. Users on these sites have a 46 percent higher risk of account takeovers and fraud than those not active on any social media networks.

16. Millennials are most likely to be identity theft victims

FTC data shows those aged 30-39 are most likely to be identity theft victims. That age group, which comprises some (but not all) Millennials, reported over 170,000 instances of ID theft in 2019. Individuals who fall within Gen X, aged 40-49, were the second most likely to have reported ID thefts, with over 120,000 incidents.

According to the Identity Theft Resource Center, 1.3 million children’s records are stolen every year. Foster children have an even greater risk as a percentage of all children.

Self-reported data to the FTC indicates that over 14,000 identity theft victims were under the age of 19 in 2019. These are similar numbers to what was reported in previous years.

FTC data from 2016 shows a surprising 11% of those who reported identity theft to law enforcement did not want a police report taken.

19. Only 25% of consumers use VPNs to protect their identity

Despite the verified increase in data protection it provides, 75 percent of consumers fail to use a VPN to protect their WiFi connections.

Symantec found that 87 percent of consumers have left their personal information exposed while accessing emails, bank accounts or financial information, another issue that could be mitigated through the use of a VPN.

The lack of personal WiFi protections appears to coincide with the fact that 60% of consumers feel as though their personal information is safe when using public WiFi.

22. Identify theft now accounts for over 20% of all FTC CSN reports

23. Most small businesses store private information that could be exposed

According to a CSID survey, 52% of small businesses don’t invest in cyber risk mitigation, believing that they don’t store any private information. However, 68% at a minimum store email address, which is one potential entry vector for hackers.

CSID also found that 31% of surveyed small businesses are not taking any active measures to mitigate cyber risks such as data breaches and hacking.

Complicating the matter is money and human resources. Nearly 77% of businesses claim they don’t have the personnel to properly secure their records and systems, a 2% increase from 2018. Around 55% indicate they lack the budget to invest in better protection.

25. Many fraud victims don’t get reimbursed for their losses

Experian found 42% of surveyed adults in the U.S. admit to shopping online over public WiFi.

Despite the risks involved, a survey found 79% of Americans admit to sharing passwords. Only 13% of survey respondents were worried about identity fraud, despite the risk. Given 81% of surveyed US adults admit to reusing passwords across sites, many adults could be more vulnerable to ID theft than they realize.

28. Card-related fraud is down in Australia

The Australia Payments Network reports that all while spending on payment cards is up, card fraud is down. Its FY 2019 report indicates counterfeit/skimming fraud fell by 19.2%, lost and stolen card fraud fell by 16.1%, and card-not-present fraud (CNP) fell by 5%.

In its 2018 study The Aftermath®: The Non-Economic Impacts of Identity Theft, the Identity Theft Resource Center examined the emotional impacts that follow from identity theft victimhood. The study found 77.3% of victims report increased stress levels and 54.5% experienced more fatigue and decreased energy.

ID theft victimhood can also erode personal relationships. Over 45% of victims felt they could not trust family members after experiencing ID theft. A further 55% noted newly-developed trust issues with friends.

Although there were just over 14,600 reports related to it, FTC Consumer Sentinel Report data shows identity theft based on fraudulent applications for federal student loans rose 188% between 2018 and 2019.

Identity theft statistics reveal the problem is not going away

Identity theft is increasingly a 21st-century problem. As more data moves off of physical paper and onto Internet-connected servers, the chances of that data getting stolen increases as well. While “malicious outsiders” remain active in stealing data (and by extension, loss of credit card numbers and Social Security Numbers), consumers share a good part of the blame for their lost data. Nevertheless, there are some positives that have emerged in response.

Thankfully, Consumers are getting slightly better at detecting fraud attempts. Javelin Strategy and Research found that online shoppers tended to be quick at identifying fraud attempts. Surprisingly, 78 percent of fraud victims were able to detect fraud within a week’s time.

Still, identity theft prevention appears to be on the rise despite savvier consumers. Data breaches show no signs of decreasing. And unfortunately, consumers still appear to be less than proactive when it comes to securing their private information.