2022 has rolled in, and so has a new bout of ransomware. Here's everything you need to know about the latest trends, facts, and stats surrounding ransomware.
Sam Cook Data journalist, privacy advocate and cord-cutting expert 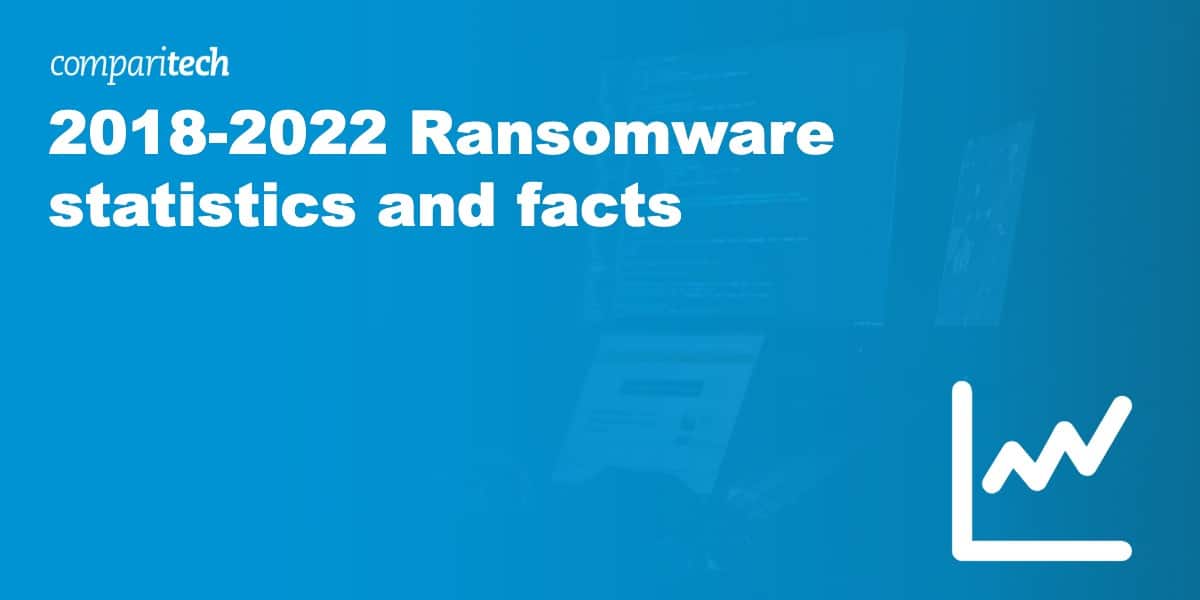 *This article is regularly updated with the latest ransomware statistics for 2018 – 2022. We’ve compiled 35+ ransomware facts, figures, and trends along with a round-up of predictions from industry experts at the bottom of the article.

Once upon a time, ransomware was just a popular buzzword – now it is an all-too-real threat to businesses, governments, and individuals worldwide. The problem with ransomware is twofold:

First, ransomware is designed to completely encrypt a victim’s file system, potentially causing an irreversible loss of data. Second, an increasing number of cybercriminals are utilizing ransomware to extract money out of victims. Some surveys have shown that losses for businesses can average $2,500 for each incident, with businesses willing to shell out millions of dollars to decrypt their data in some instances.

The threat is only growing, as some reports find. Sonicwall, for example, found that this kind of attack increased by more than 100% in 2021 alone. Further, while small-to-midsized businesses were at the largest risk, ransom demands regularly hit seven or even eight-figures. The highest ransom confirmed to have been paid at the moment is $40 million USD by CNA Financial in May 2021. 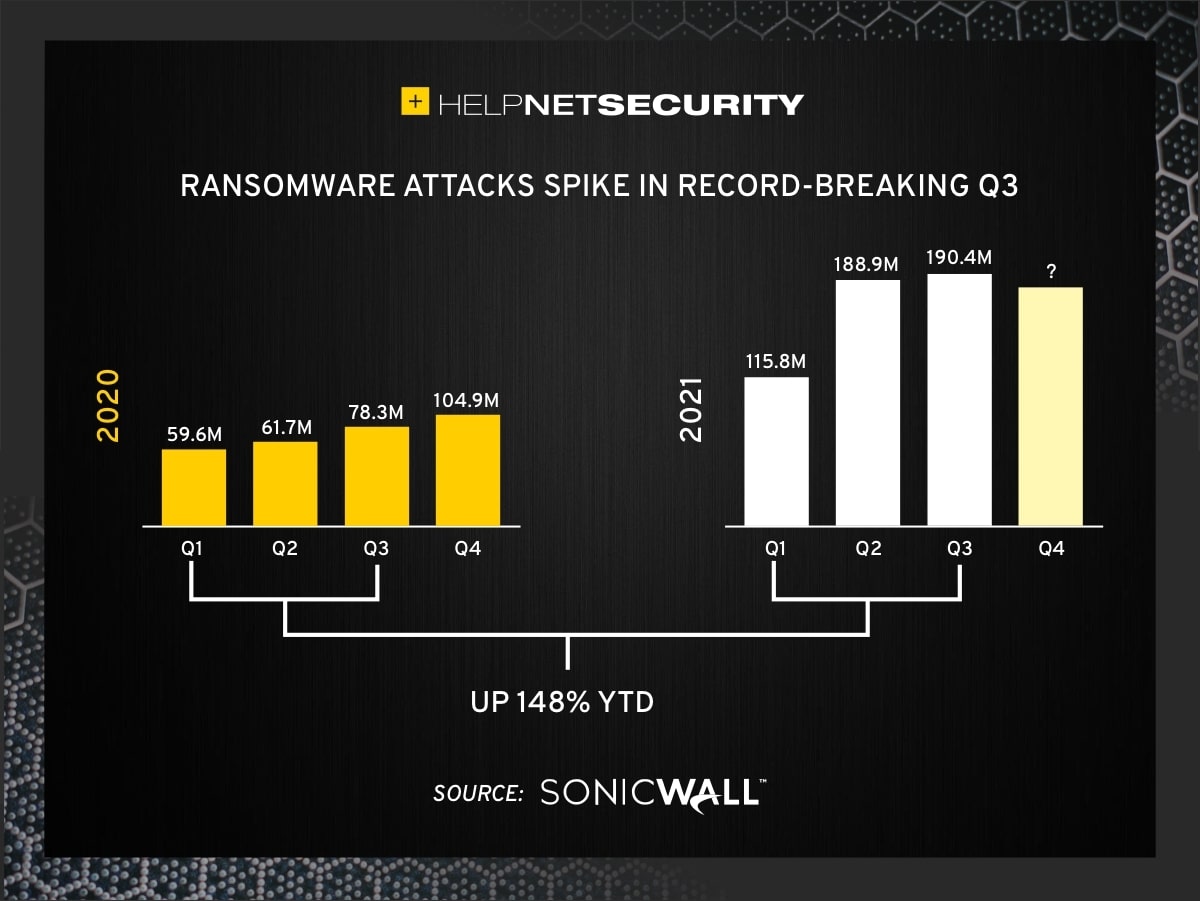 All of this is proof positive that this type of threat continues to be an extremely lucrative venture for cybercriminals, with attackers against all sources (businesses, governments, and individuals) now collecting more than $100,000 per attack.

To get a better idea of what the ransomware landscape looks like, we’ve gathered some of the most interesting facts and statistics from 2018 to 2022 that highlight this ongoing security concern.

According to the 2022 report from VEEAM, 95% of ransomware attacks also attempted to infect backup repositories. This underscores the dangerous nature of this growing threat and highlights how businesses may find themselves in trouble unless they have properly segregated off-site backups in place – preferably with multiple backups in multiple locations.

According to a December 2021 study by Positive Technologies,  companies have a long way to go before they are adequately protected against hacking and ransomware attacks. According to their research, a whopping 93% of corporate networks can successfully be penetrated by hackers, allowing them to deploy ransomware, trojans, spyware, or other malicious exploits.

Only 50% of US SMBs have cybersecurity

Perhaps unbelievably, half of US small and midsize businesses have no cybersecurity in place according to a 2022 study by UpCity. This reveals that startups and SMBs are at extreme risk of ransomware attacks, and must put cybersecurity at the top of their agenda if they want to avoid losing valuable intellectual property, customer data, and other company information necessary for carrying out day-to-day.

Given the whole purpose of ransomware is to extract money from victims, total loss values are often the numbers people care about the most. Between 2018 and 2022, an increasingly large number of businesses, governments, and individuals faced huge losses thanks to these types of virus attacks.

In 2020, CWT, a travel-management company shelled out $4.5 million to hackers holding its data for ransom. While this represents a particularly huge payout, it’s still less than half of the attacker’s initial demand of $10 million. Additionally, the average ransom demand has increased significantly, with attackers asking for $50 million from computer giant Acer in 2021.

These past few years have seen attackers move away from targeting individuals. Instead, it’s become common to target infrastructure, with local governments, hospitals, and universities around the world suddenly facing demands for huge amounts of money. Naturally, these institutions have huge incentive to pay, and while the FBI strongly advises against it, Thycotic’s 2021 State of Ransomware report found that around 83% of victims end up paying.

The highest-profile attack of 2021 was arguably the one on Colonial Pipeline. This provided over 40% of the East Coast’s fuel, but as the ransomware attack left the company unable to bill properly, it was forced to suspend operations temporarily. Even though the company paid a $4.4 million ransom, it took a long time to get everything back online, leading to fuel purchasing restrictions in 17 US states.

This isn’t the only instance of lengthy problems following an attack. In 2019, the Baltimore City government was crippled for over a month. Estimates put the cost to recover at over $18 million dollars, although the cybercriminal behind the malware only demanded $76,000 worth of Bitcoin. The attack reportedly impacted vaccine production, ATMs, airports, and hospitals.

While many chose not to pay the cost for ransomware (and indeed, most security professionals say paying is typically a bad idea anyway), those that do pay up often find their files remain encrypted. After all, placing trust in the good graces of criminals often leads to disappointment.

With current trends, loss values are likely to exceed $265 billion by 2031. Additionally, as well as walking off with more money from ransomware in recent years, cybercriminals also caused far more damage than ever before. 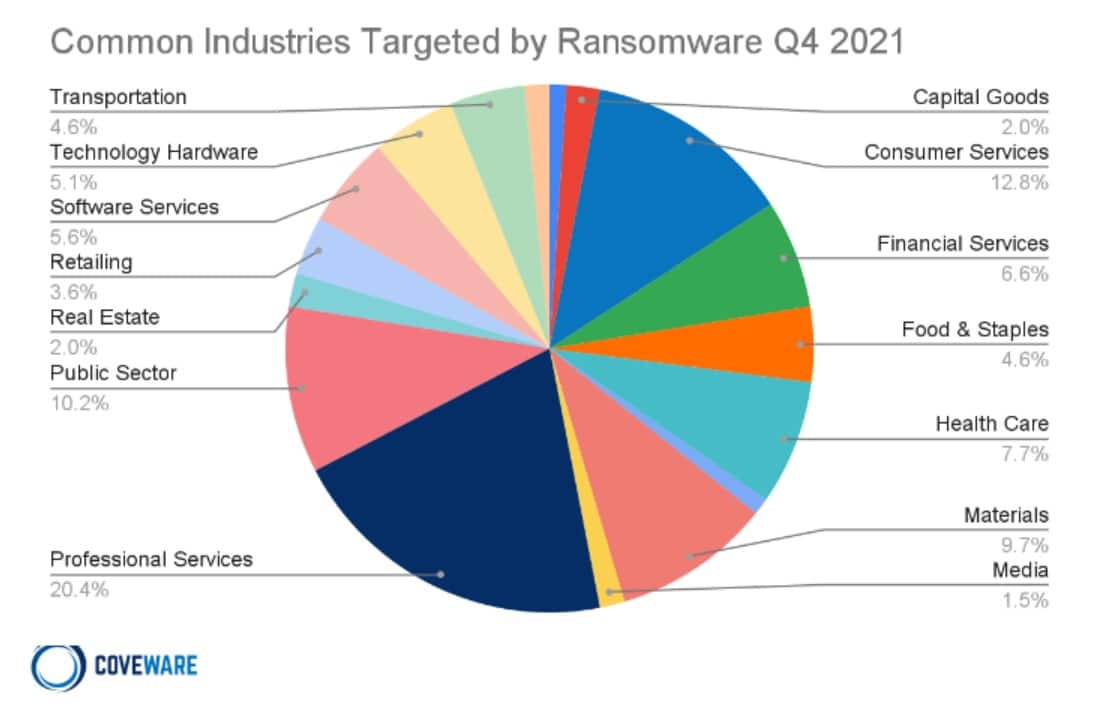 The hard truth about ransomware is that knowing more about the threat doesn’t easily translate to a decreased impact. FedEx is a good example of this. Despite knowledge of the threat for years now, the company saw a $300 million loss in 2017 due to these crippling virus attacks. The loss was not a result of paying the ransom but primarily for the cost of disaster recovery and system downtimes. The company’s lack of cyber insurance highlights the fact that many individuals and even large, multinational businesses have yet to fully grasp the threat.

As for readiness for ransomware and other cyber threats, Sophos reports that local governments are among the least likely organizations to be able to stop their data from being encrypted. Additionally, these are the slowest to recover, with 40% needing a month or more to bounce back. Meanwhile, media, leisure, and entertainment companies are the most prepared, but still only avoided encryption a little over half of the time.

Nevertheless, as more reports roll in, it’s clear that ransomware is now the preferred medium of choice for cybercriminals. As 2022 continues to progress, we’re likely to see reports from major players indicating that year-over-year growth in virus-related ransom threats is increasing at an incredible pace.

That being said, here are some of the ways ransomware hit hard and fast in the past few years.

Ransomware predictions: 2023 and beyond

Unfortunately, ransomware isn’t going anywhere fast. Cybercriminals have learned just how lucrative encrypting data can be, especially thanks to the influx of Ransomware-as-a-Service programs that require no expertise to use. Other forms of security threats still exist, data breaches in particular, but criminals who want to extract an easy buck are regularly turning to readily-available ransomware packages.

So what can we expect in 2023 and beyond? Here are a few predictions.

Ransomware is malicious software that puts a person's data at risk unless they pay a ransom to the attackers. It is important to know how to protect yourself from this type of attack and what to do if you become a victim.

Once ransomware is on your computer, it will encrypt your personal files and demand you pay a ransom to get the decryption key. The attackers will usually give you a time limit to pay the ransom, and if you don't pay within that time, they will threaten to delete your files or publish them publicly.

If you become a victim of ransomware, you first should contact a professional who can help you recover your data without paying the ransom. Some free tools can help you do this, but they are not always successful. If you do pay the ransom, make sure you use a reputable source to buy the decrypt key and only do so after you have verified that your data has been successfully decrypted.

How do people get infected with ransomware?

There are a few ways that people can get infected with ransomware. One way is by clicking on a malicious email attachment. Another way is by visiting an infected website. It is also possible to get infected by downloading a malicious file from a peer-to-peer network or by installing a pirated software program that contains ransomware.

What type of data is at risk in a ransomware attack?

In a ransomware attack, any type of personal data can be at risk. This includes things like photos, documents, and even financial information.