How to watch the 2019 Stanley Cup playoffs online from anywhere

Want to watch the Stanley Cup online? In this post, we’ll explain how to live stream every 2019 Stanley Cup playoff from anywhere with a VPN.
Ian Garland Streaming, Kodi and VPN Expert 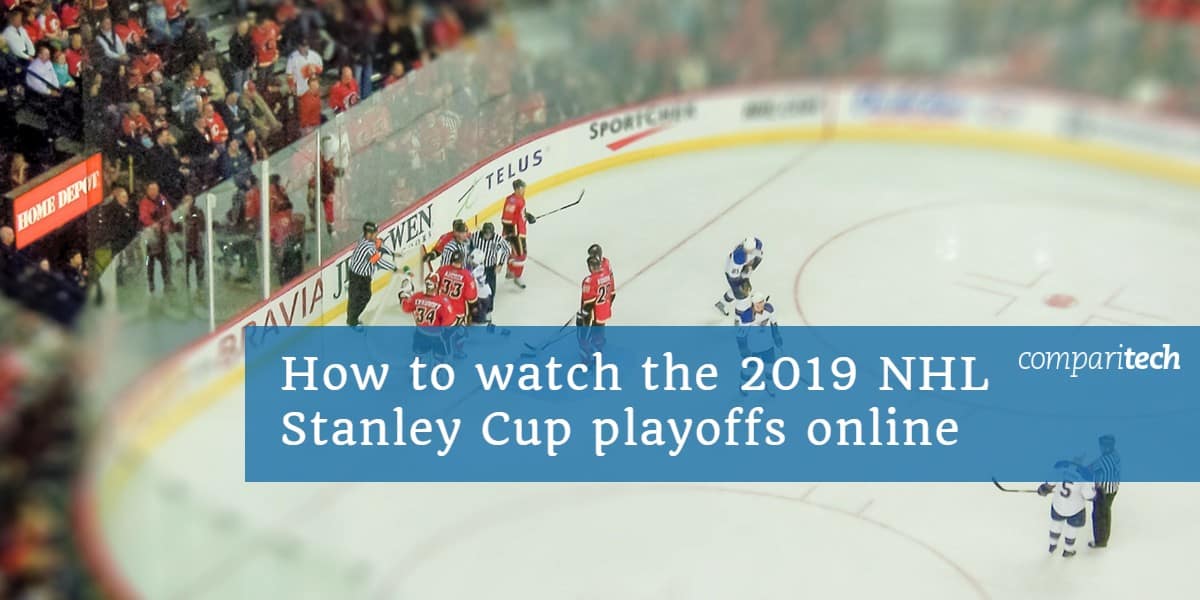 The first two rounds are over, so all that remains is to decide the winners for each conference. The Boston Bruins only need to win one more game against the Carolina Hurricanes to secure their spot in the finals, while San Jose Sharks and St. Louis Blues are more evenly matched. This stage will be over by May 23 at the latest, and the finals will begin early in June. Below, we’ll explain how to watch every Stanley Cup playoff for free, wherever you are in the world.

It’s important to note that we’ll only be recommending official sources. Major sporting events like the Stanley Cup are often available on shady streaming sites, but we suggest you only use properly licensed sources. Official broadcasters have higher quality video and there’s no chance of the stream being taken offline for copyright violation partway through. You can watch every 2019 Stanley Cup playoff for free anyway, so there’s no need to use unauthorized streams.

Most of the streaming services showing this tournament are region-locked. This means that you’ll need a VPN to use them abroad.

Unblocking geo-restricted services is easy, even if you’ve never used a Virtual Private Network (VPN) before. Follow the steps below to bypass regional restrictions and watch the 2019 Stanley Cup from anywhere:

These matches will be broadcast live, which is why we recommend making sure your VPN works well before they begin. This way, if you run into any problems, you should still have time to get help from your VPN’s customer support team and might not have to miss the start of a highly important game.

You can stream every 2019 playoff live on NBC Sports. Start times vary, but you can find up-to-date information on each upcoming fixture in NBC’s live broadcast schedule. Watching online is completely free if your cable TV package includes NBC Sports, but if it doesn’t, or if you don’t have cable, don’t panic; there is another way to follow all of the action live.

NBC Sports allows users to sign in with their DirecTV Now, fuboTV, Hulu with Live TV, PlayStation Vue, Sling TV, or YouTube TV accounts. Better still, each of these services comes with a free trial period that’s long enough for you to stream every playoff fixture. In fact, Hulu’s trial lasts for 30 days, meaning that as long as you cancel in time, you’ll also be able to watch the Stanley Cup finals for free.

The platforms above are all geo-restricted, meaning you’ll have to either be in the US or using a US VPN server to access them. Don’t have a VPN yet? ExpressVPN offers a 30-day money-back guarantee, meaning you can try it risk-free. If you’re unsatisfied or only needed ExpressVPN to watch the Stanley Cup playoffs, you can simply cancel to receive a full refund.

In Canada, Sportsnet and CBC Sports are sharing English-language coverage rights to the Stanley Cup. TVA Sports, meanwhile, is the exclusive French-language broadcaster.

Sportsnet and TVA Sports both allow you to login and stream their games for free if the respective channels are included in your cable TV subscription. If not, you can sign up for a digital subscription instead (both services cost $19.99 CAD per month, and neither offers any trial period). CBC Sports, on the other hand, will show selected fixtures free-of-charge via the CBC Sports app for iOS and Android.

Sportsnet, CBC Sports, and TVA Sports are only available in Canada. As such, you’ll need a VPN to login from abroad.

Premier Sports is the only platform showing the 2019 Stanley Cup playoffs in the UK. If you’d like, you can add these channels to your existing Sky or Virgin TV subscription (and watch online using the Sky Go or Virgin TV Go apps) but the easiest way for most people to stream the playoffs is to sign up for the Premier Player plan. This costs £9.99 per month, but there’s a one-month trial (which Virgin customers usually can’t take advantage of). As a result, you’ll be able to watch every remaining Stanley Cup fixture for free, provided you cancel before the trial ends.

This service is region-locked and can only be accessed from within the UK. However, subscribers can login from abroad by connecting to a British VPN server first.

There’s no need to worry if we haven’t mentioned your country above. NHL.tv will be showing every Stanley Cup playoff game and the entire final stage live in over 50 countries including Germany, Australia, France, Spain, and Italy. Although there’s no free trial, at $4.99 USD (roughly €4.45) per season, this service is very reasonably priced.

How does the Stanley Cup work?

The Stanley Cup format is pretty straightforward. Sixteen NHL teams qualify for the first round, and take part in best-of-seven matches until only four remain from both the Eastern and Western conferences. The winners from round one then repeat this process until there are just two teams left.

These then move into the final round. The first team to win four games wins the Stanley Cup and the players receive championship rings. Note that the tournament ends the moment a team wins their fourth match; in other words, there’s no guarantee that all seven games will be played.

It’s also worth mentioning that these matches cannot end in a tie. If the score is level at the end of play, the teams will play an unlimited number of 20-minute, five-man overtime periods until one scores. This usually only lasts a few periods at most, but there have been two games in Stanley Cup history (Detroit Red Wings vs. Montreal Maroons and Toronto Maple Leafs vs. Boston Bruins) which required as many as six.

Which team is more likely to win?

Unless the Carolina Hurricanes pull off an incredible comeback, the Boston Bruins are almost certain to progress to the finals. However, it’s much more difficult to predict which team they’ll be facing, since the San Jose Sharks and St. Louis Blues have been very close. The Blues will have to be a little more aggressive, though, as the Sharks are currently leading, take more shots per game, and stop around 82% of their opponent’s power plays.

Whoever wins, the Bruins will be happy. Historically, this team have won 63.8% of their games against San Jose and 57.2% against St. Louis. It’s not all about technique on the ice, though; the Bruins are known for their rough, aggressive tactics which drain their opponents more the longer a game lasts. Regardless of whether the Sharks or Blues win, their best bet is to stay calm, keep pressing the Bruins’ goal, and avoid overextending whenever possible.