Looking to watch Grey’s Anatomy season 17 but having trouble with geographic restrictions? In this post, we’ll cover what to expect from the new season, how to stream it online, and how to unblock it abroad by using a VPN.
Mark Gill TECH JOURNALIST, VPN AND PRIVACY SPECIALIST 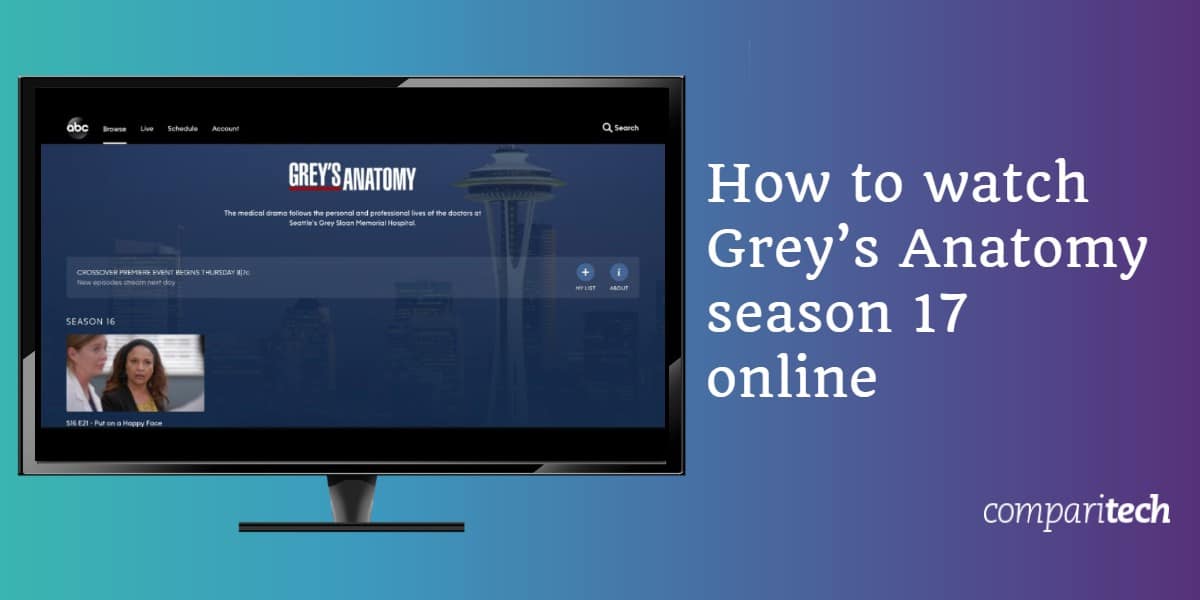 If you’ve been wondering when Grey’s Anatomy will return in 2020 you’re in luck! Grey’s Anatomy season 17 is set to premiere on Thursday, November 12, at 9 PM EST (6 PM PST). Fans of the long-running medical drama series have had to wait a little longer than usual for its return after season 16 production was suspended due to the Covid-19 pandemic. Following a seven-month hiatus, season 17 will kick off with a two-hour season premiere. Take a look below to find out how you can watch this live online.

We’ll only be recommending official sources for watching Grey’s Anatomy season 17. Such is the popularity of the series, there are always plenty of unlicensed streams. The trouble is that these are usually low resolution and face regular interruptions in the form of lag and buffering. Many unofficial sources are even taken offline for copyright infringement. Fortunately, we’ll show you the best ways to stream the show online from anywhere.

Grey’s Anatomy season 17 will only be shown on region-locked platforms. If you’re traveling abroad, you’ll need a Virtual Private Network (VPN) to continue watching via your usual home streaming services.

By connecting to a VPN server, you can change your IP address and make it look as if you’re browsing from another location. One benefit of this is that you can then access websites and content that would otherwise be geo-restricted where you are. This includes ABC and as a result, Grey’s Anatomy season 17.

Here’s how to watch Grey’s Anatomy season 17 online from anywhere:

Grey’s Anatomy season 17 will broadcast live on ABC. That’s why we recommend you test your VPN with ABC ahead of time. If you have any trouble, you can contact your VPN’s customer support who may be able to help resolve the issue in advance of the season 17 premiere.

How to watch Grey’s Anatomy season 17 on US TV

As with all previous seasons of Grey’s Anatomy, Season 17 will premiere on ABC. This means that if you have a US cable TV subscription, you can watch it online by signing in with your TV provider. You’ll need to enter the same cable TV login details (either a username or email address and a password). Once signed in, you’re good to go!

Don’t have cable TV? The good news is that there’s also a way to live stream ABC cable-free. To do this, you’ll need to subscribe to one of the following streaming TV services, all of which offer ABC as part of their packages: AT&T TV Now ($55 USD/month), FuboTV ($64.99/month), Hulu with Live TV ($54.99/month), and YouTube TV ($64.99/month). It’s worth adding that some of these services even include free trials.

Whether you decide to watch Grey’s Anatomy season 17 directly on ABC or via a streaming TV service such as Hulu, you’ll need a VPN to watch outside the US. That’s because ABC is only available in the US. If you’re traveling abroad, simply connect to a US server for a US IP address. All ABC content should then be unblocked. ExpressVPN includes a 30-day money-back guarantee. This makes it a great, risk-free option for use with ABC.

Where else can I watch Grey’s Anatomy season 17?

While season 17 of Grey’s Anatomy will premiere on ABC, we can expect it to air on Sky Witness in the near future. Indeed, this was the case for season 16 which aired in the UK towards the end of its run on ABC. If this is the case and you have a Sky TV subscription, you should soon be able to watch Grey’s Anatomy season 17 at no extra cost. To do this online, simply access the Sky Go app.

There’s also a way to watch Grey’s Anatomy season 17 on Sky Witness without the commitment of a long-term contract. This is possible with Now TV which has an entertainment package consisting of multiple channels including Sky Witness. This costs £9.99 monthly and includes a seven-day free trial. Now TV is only available in the UK so it’s worth bearing in mind that you’ll need a UK IP address to watch it abroad.

What can we expect from Grey’s Anatomy season 17?

The two-hour season premiere of Grey’s Anatomy season 17 will consist of the first two episodes which are titled “All Tomorrow’s Parties” and “The Center Won’t Hold”. Perhaps unsurprisingly as a medical show, Grey’s Anatomy season 17 will address the ongoing Covid-19 pandemic. This comes after the pandemic forced production of season 16 to shut down, cutting it short by four episodes. We can expect hard times as Grey Sloan Memorial and its surgeons’ find themselves on the front line. In a crossover with Station 19, an accidental fire sees first responders from Station 19 bringing patients to the hospital.

Which cast members are returning for season 17?

The big news is that Ellen Pompeo (Meredith Grey), who has been on the show from the very beginning, is back for another season. Indeed all of the show’s leads are set to return. This includes Giacomo Gianniotti (Andrew DeLuca), Jackson Avery (Jesse Williams), Maggie Pierce (Kelly McCreary), Miranda Bailey (Chandra Wilson), Amelia Shepherd (Caterina Scorsone), and Richard Webber (James Pickens Jr.). We’ll also see some new faces including Mackenzie Marsh (Charmed) as a character called Val Ashton.