There are plenty of cheap VPNs but many sacrifice speed or skimp on security while others won't work with your favorite streaming services. These 5 budget VPN services punch well above their weight.
Osman Husain Tech journalist, VPN and streaming expert 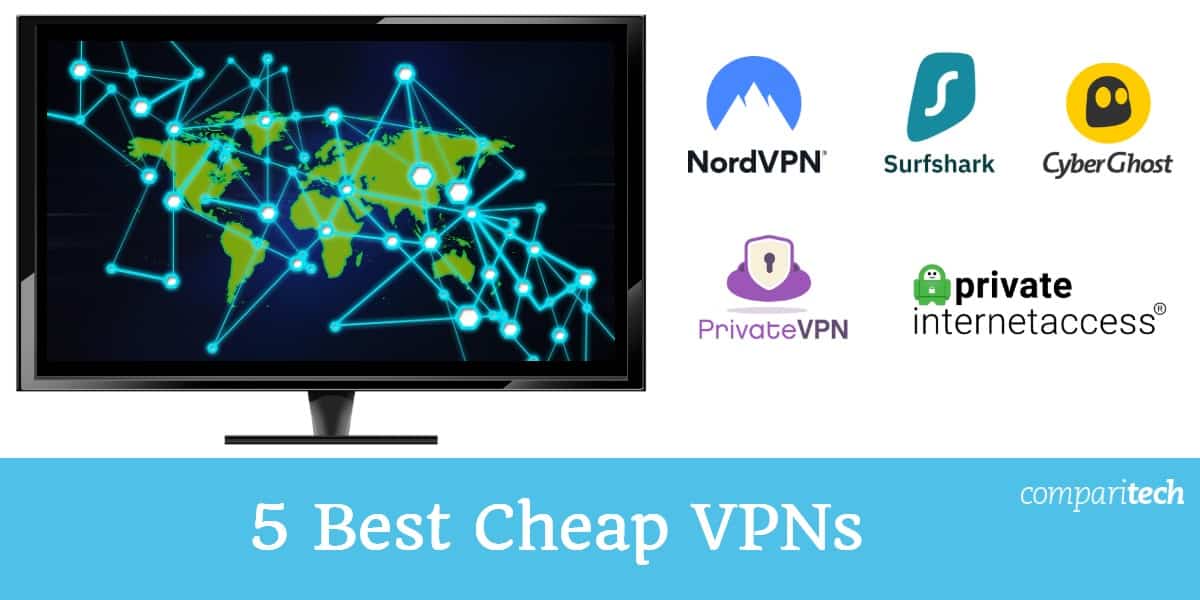 There is no shortage of cheap Virtual Private Network (VPN) service providers, but does a low-cost service mean sacrificing some of the features any good VPN provider should include? Will the cheapest VPNs keep your online activity private? Will they work with streaming services like Netflix, Amazon Prime and BBC iPlayer?

We take a look at 5 affordable VPN services that cut prices but not corners.

VPN services don’t usually cost an arm and a leg (especially if you can make the most of VPN deals) but we understand that there are many users out there on a tight budget looking for cheap, reliable options. Free VPN services don’t cut it because they’ll usually skimp on download speeds and encryption standards.

What exactly is a VPN?

For the uninitiated, a Virtual Private Network (VPN) is a software that helps you stay safe and secure on the web. The service works by encrypting all the web traffic to and from your account and routing it via an intermediary server of your choice. This helps keep nosy surveillance agencies and hackers at a distance and also makes it seems like you’re accessing the internet from a different location.

The latter feature makes it possible to unlock geo-restricted content on streaming services. That’s one of the reasons why foreign expats find a VPN to be an excellent choice for staying in touch with content from back home.

Opting to use a VPN is an excellent choice in the first place, so in this article, we’ll take you through our list of the ones that are inexpensive, reliable, and deliver the most bang for your buck.

We get into plenty of details on each of the providers we feature below, but if you can’t stick around for the whole article, below is our summary of the cheapest VPNs, that still offer quality service and robust online security.

We excluded ExpressVPN, one of our top-ranked VPNs, from this list as it doesn’t qualify as a budget option. While it is a solid option, it is one of the more expensive VPNs on the market. If you are considering ExpressVPN you can save 49% on the cost with this ExpressVPN coupon.

Our ranking is predicated on the following factors:

Our testing found that these are the top 5 cheap VPN service providers:

NordVPN is our top recommendation and a veteran in the VPN space. It’s the fastest VPN we’ve tested, has tons of customizable options, and will appeal to both beginner and power users.

NordVPN boasts a zero logs policy, so it doesn’t track anything you do online. Encryption standards are top-tier – NordVPN uses the 256-bit AES protocol encryption standard by default coupled with 2,048-bit SSL keys. This VPN provider also offers split-tunneling should you require it. DNS leak protection is enabled ensuring safety when connecting to public wi-fi. It operates more than 5,000 VPN servers in 59 countries.

This VPN provider works with a ton of online streaming services and platforms such as Netflix, Hulu, and BBC iPlayer without any problems. Plans come with unlimited bandwidth and torrenting is permitted.

Apps are available for Windows, MacOS, iOS, Linux, and Android. The service allows six devices to connect at one time.

BEST CHEAP VPN:NordVPN is the best low-cost VPN. Great performer for streaming and torrenting. Premium service for a budget price. Strong privacy and security features and allows up to 6 devices to be used simultaneously from one account. Includes a 30-day money-back guarantee making it a risk-free option.

Surfshark is a newer cheap VPN provider that’s great for unblocking Netflix and other streaming services without adding too much onto your monthly bill. It works in China and allows torrenting, too.

Every connection is protected with strong encryption, and Surfshark doesn’t store any logs of user activity or other identifying information. 24/7 live chat support is ready to help.

Best of all, Surfshark allows you to connect an unlimited number of devices, which makes it a great option for a family or group of housemates with a lot of phones and laptops. Apps are available for Windows, MacOS, iOS, and Android.

CyberGhost is an excellent option for beginner users on a budget that want a plug-and-play option without many frills or customizable options.

The company is headquartered in Romania – out of the reach of any mandatory data retention laws. The company abides by a strict no-logging policy to keep your online activities secure. Torrenting is permitted on most servers except those located in the United States, Russia, China, and Singapore.

CyberGhost operates thousands of servers in more than 89 countries, giving you plenty of streaming options. CyberGhost makes it easy to unblock your favorite streaming sites like Netflix and BBC iPlayer by selecting the specially optimized servers for torrenting, right from the app.

Apps are available for both Linux, Android, and iOS as well as desktop support for Windows and MacOS. A maximum of seven devices can connect simultaneously.

PrivateVPN is a relative newcomer in the industry and doesn’t offer the expansive server network that’s a hallmark of players like NordVPN. But the service is cheap, easy-to-use, and packs a punch when it comes to speed and stability.

PrivateVPN doesn’t have many servers, but it does unblock more international Netflix libraries than any other VPN we’ve tested. It also unblocks other geo-restricted sites like BBC iPlayer and Hulu.

There are apps for Android and iOS as well as desktop apps for Windows, MacOS, and Linux. Torrenting is permitted, and one user can connect up to six devices at any time.

GREAT SPEEDS:PrivateVPN is a good family choice. Download speeds were surprisingly good at this end of the market. Could do with having more servers. 30-day money-back guarantee.

Here’s our in-depth review of PrivateVPN.

PIA offers a pretty diverse range of server locations – there are 3,272 of them spread across 25 countries including many in the Western hemisphere. Torrenting is permitted on all servers.

A user may connect up to five devices with a single account. PIA supports Android, iOS, Windows, MacOS, and Linux. Unfortunately, it doesn’t always work with Netflix.

Read more in our review of PIA.

Will free VPNs do the job?

Users short on cash might be tempted to go for a free VPN service. They’re present on the internet and don’t require you to fork over your credit card details – luring and enticing users who think they’re getting the real deal.

We recommend you proceed with caution. Many such ‘free’ services have been caught indulging in fairly abhorrent practices such as forcefully injecting tracking cookies, mining your data, and selling it to third-party advertisers. It’s a handy reminder of the fact that when the product is free, usually you end up being the product.

Other VPNs might be freemium which means that even if they don’t steal your data, they’ll definitely subject you to download caps, bandwidth throttling, and a small selection of servers (usually only one or two). They’re not bothered with robust encryption either, so there’s a continued risk of being exposed.

After all, such companies are registered businesses too. They need to make money to pay for salaries, office space, and server maintenance. Our recommendation is to avoid these traps to stay safe. Cough up a few dollars each month – it’ll be worth it.

There’s no clear cut answer to this: some do, some don’t. It’s worth bearing in mind that usually, if dedicated IP addresses are available, you’ll have to pay a little extra each month to get one. Additionally, you’ll often only have the choice of a few different countries.

On a tight budget? You should note that many cheap VPNs offer access to static IP address servers as part of a standard subscription. The only difference between these and a true dedicated IP address is that other users have access as well; it’s not just you. As such, these servers are still at risk of being blacklisted due to the high amount of traffic they generate.

Every VPN is different in terms of their security features, speeds, and network size. Some cheap services might offer port forwarding, while others won’t. This is a pretty advanced feature, though, so it’s worth asking yourself whether port forwarding is something you really need.

Unless you’re hosting a game server or are experiencing incredibly slow speeds, we’d actually advise against using port forwarding. This is because you’re effectively opening up your device to external connections: this is useful for things like accessing your PC remotely, but it does give attackers another avenue for compromising your system.

Can I use a cheap VPN for Netflix?

Although cheap VPNs tend to work fine with Netflix, free VPNs are a terrible choice. Netflix (and most other streaming services) can identify and blacklist these in a heartbeat since there’s so much traffic coming from such a small number of IP addresses. What’s more, because of the strain on the network, your speeds are often too slow to even stream standard-definition video.

Are cheap VPNs secure and reliable?

Major VPN providers pride themselves on their security features and they know that if their apps gain a reputation for unreliability, their customers will simply switch to a different service. For these reasons, you can expect secure, reliable connections from the vast majority of paid services.

Free VPNs are a whole other matter. These usually don’t undergo the same kind of rigorous security testing before release, and may come with vulnerabilities that actually make your device easier for attackers to access. Further, a surprisingly high number of free VPNs fail to include even basic encryption, making them effectively useless from a security standpoint.

If you’re paying for a VPN, it’s highly unlikely that you’ll face any kind of bandwidth or speed cap. These tactics are usually employed by free services as a way to generate revenue and reduce strain on their (often very limited) networks. Should you find a paid VPN that limits the amount of data you use, it’s best to run the other way; after all, any privacy tool that restricts how often you can stay safe online isn’t worth signing up to.

Should I be using a VPN at home?

Your home network might be protected but unfortunately, when it comes to technology, nothing is ever 100% secure. By encrypting your data, a VPN ensures that even if your network is breached, an attacker still won’t be able to see what you’re doing online.

Realistically, it’s a good idea to get into the habit of using a VPN everywhere you go. If this seems like too much hassle, you can configure many major services to connect automatically when your device turns on or when you use a public wifi network.