How to watch Marvel movies on Netflix

Planning a superhero movie marathon? We’ll explain which Marvel movies are on Netflix, which library each movie is in and let you know how to stream every Marvel movie online.
Ian Garland Streaming, Kodi and VPN Expert 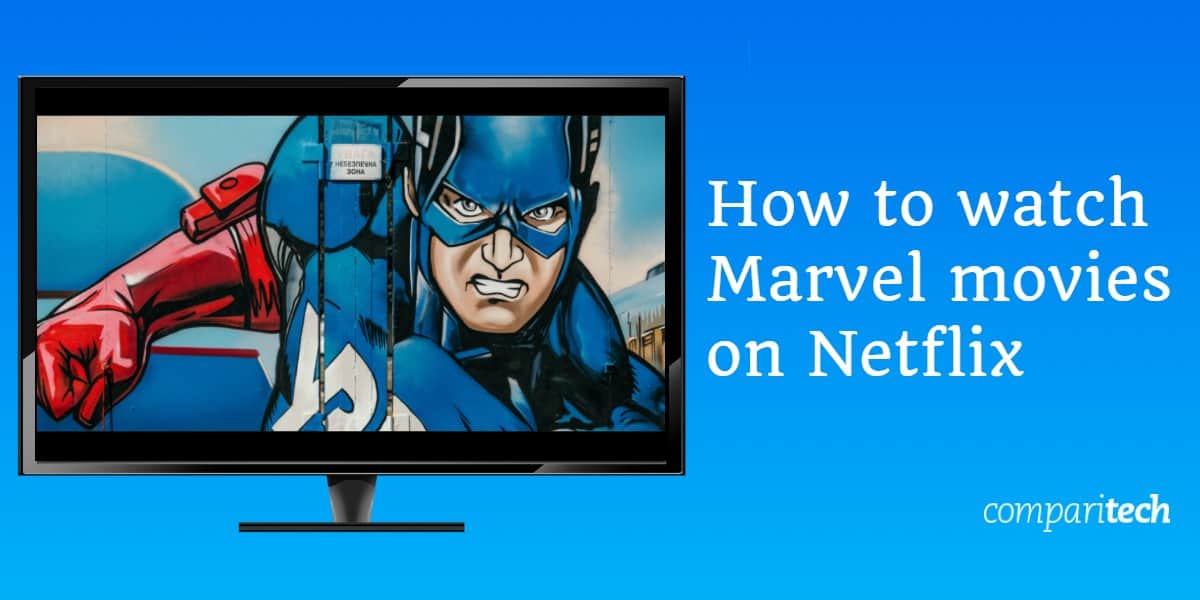 Netflix used to be the home of Marvel movies. However, many left the service with the launch of Disney+, and as a result, major titles like The Avengers and Black Panther are now only available in a handful of Netflix libraries, predominantly Netflix Germany and Switzerland. On the plus side, it’s still possible to access these if you’re traveling abroad; you just have to connect to a VPN server in the appropriate country.

Netflix, like most geo-restricted platforms, uses your IP address to tell which country you’re in. However, in connecting to a VPN, your IP address is hidden and replaced with that of your chosen server. In other words, using a British server makes Netflix think you’re in the UK. Better still, VPNs also encrypt your traffic, keeping your activities hidden from your Internet Service Provider (ISP), hackers and any other snoopers.

How to watch Marvel movies on Netflix using a VPN

It’s really quite simple to unblock Netflix using the right VPN. In fact, you can do it in a matter of minutes. Below is a short, four-step guide to streaming Marvel movies while traveling abroad.

Here’s how to watch Marvel movies on Netflix:

Choosing a VPN can be tricky. After all, there are so many different specifications to consider, and a seemingly endless stream of services all looking to grab your attention. That’s why we’ve created a list of criteria to separate the best from the rest, and you’ll find this below. As an additional benefit, these criteria ensure you’re guaranteed a versatile VPN, whichever you pick.

If you’re short on time, check below for a brief guide to the best VPNs for watching Marvel movies. Otherwise, just scroll down for a closer look at each.

You’ll find more detailed reviews of the best VPNs for Marvel movies below:

ExpressVPN is a fantastic choice for anyone who wants to stream Marvel movies online. It has 3,000+ servers in 94 countries, allowing you to unblock more than 10 regional Netflix libraries, including Netflix Germany, Hong Kong, and Singapore as well as other services, like Disney+. What’s more, it boasts fast, reliable speeds, meaning you won’t have to worry about lag or buffering. If you have lots of devices to protect, don’t worry: ExpressVPN allows up to five simultaneous connections.

This service comes packed with security features. First there’s DNS, IPv6, and WebRTC leak protection, plus 256-bit encryption that ensures your data can’t be read by snoopers. There’s even a kill switch that stops sending data if your connection drops, meaning you never have to browse unprotected. ExpressVPN refuses to log any data that could identify you. For even greater privacy, users can pay in Bitcoin. Staff are on-hand 24/7 (via live chat) to address any issues you might have.

BEST VPN FOR MARVEL MOVIES:ExpressVPN is our top choice for streaming Marvel movies on Netflix. It’s very fast and unblocks more than eight regional libraries without compromising on security. Best of all, ExpressVPN offers a 30-day money-back guarantee so you can try it risk-free.

For more information, check out our complete ExpressVPN review.

NordVPN is known for its strong unblocking ability. In fact, with access to over 5,400 servers in 59 countries, users will not only be able to watch Marvel movies on Netflix UK, Canada, and Japan, they’ll also be able to unblock Disney+. This service doesn’t limit your bandwidth and its speeds are second to none, so you can stream as much as you like, without any noticeable buffering.

NordVPN apps are available for MacOS, Linux, Windows, Android, and iOS devices. Further, this service can be manually configured for use with supported internet routers.

BEST BUDGET VPN:NordVPN is a highly affordable service that somehow manages to provide exceptional speeds, cutting-edge security and privacy features, and the ability to unblock Netflix from anywhere. It also includes a 30-day money-back guarantee.

Take a look at our full NordVPN review.

Surfshark has more than 1,700 servers in 63 countries, as well as strong unblocking ability and absolutely no connection or bandwidth limits. These features, coupled with its generally solid speeds, make it a strong choice, especially if you’d like to share your VPN with family. As well as unblocking around half a dozen Netflix libraries (including Netflix UK, Canada, and Japan), Surfshark works with Disney+, Amazon Prime Video, and many similar services.

Your data is kept hidden at all times using powerful 256-bit encryption, DNS and IPv6 leak protection, and a kill switch. That’s not all: there’s also a built-in ad-blocker and malware-scanner, plus a NoBorders mode that helps you bypass even the most stubborn geo-blocking. Surfshark is a zero-logs provider, so it can’t reveal your activities under any circumstances. Need help? Live chat-based support is available around the clock.

STREAM WITHOUT LIMITS:Surfshark takes the stress out of streaming Marvel movies online. With high speeds, strong security, and no connection limits, you’ll be able to watch anywhere, without worrying about if it’s safe to do so. All plans come with a 30-day money-back guarantee.

CyberGhost makes it as simple as possible to watch your favorite heroes in action. It unblocks several regional catalogs, including Netflix Germany, which is the library with the most Marvel movies. Further, this service boasts a huge network (6,600+ servers in 90 countries), consistently high speeds, and unlimited bandwidth. This means that you shouldn’t have any performance issues, even during evenings or weekends.

As all of this VPN’s security features come pre-configured, you don’t have to do anything to take advantage of 256-bit encryption, a kill switch, and protection against DNS and IPv6 leaks. To sweeten the deal even further, it blocks ads, malware, and trackers automatically. CyberGhost doesn’t keep any logs that could be traced back to you. Further, it operates a 24/7 live chat help desk so you’ll never be more than a few moments away from support.

Why not check out our full review of CyberGhost?

PrivateVPN is among the fastest VPNs we’ve tested, which means it’ll allow you to stream Marvel movies in the highest possible quality without any lag or buffering. With roughly 150 servers in 60 countries and impressive unblocking abilities, it’s a strong choice whether you want to access Netflix, Disney+, or just about anything else. Users can connect up to six devices simultaneously.

This VPN boasts a wide array of security features such as IPv6 and DNS leak protection, a kill switch, and effectively uncrackable encryption. It also offers a stealth mode for getting around especially difficult geo-blocking measures. Better still, PrivateVPN follows a strict no-logs policy, meaning your privacy is in good hands. Finally, if you’re having problems, you can contact support over live chat and email.

PrivateVPN has Windows, MacOS, Linux, Android, and iOS apps. What’s more, it can be manually installed on supported routers.

EXTREMELY FAST:PrivateVPN combines high speeds with strong security features and a no-logs policy to create a service that’s ideal for streaming. As if that wasn’t enough, this VPN offers a 30-day money-back guarantee and works with more than half a dozen Netflix libraries.

Take a look at the complete PrivateVPN review.

Hotspot Shield is a speedy provider offering unlimited bandwidth and access to around 1,800 servers in over 80 countries. As you might expect, these characteristics make it popular with people who like to stream. This service unblocks several regional Netflix catalogs and even works with tricky platforms like Amazon Prime Video, so you’ll never be short on things to watch.

This service doesn’t disappoint when it comes to security. In fact, thanks to its 256-bit encryption, DNS leak protection, automatic wifi protection, and kill switch, you won’t have to worry about snoopers, even when on public networks. Hotspot Shield deletes all identifiable data once your session ends, all but guaranteeing your privacy. Support is available day and night via email or live chat.

Hotspot Shield provides apps for Linux, MacOS, Windows, iOS, and Android. If you’d prefer, it can also be manually configured for use with select network routers.

WATCH ANYWHERE:Hotspot Shield gives you the freedom to stream Marvel movies on Netflix, whichever country you’re in. It’s quick, reliable, and security-conscious, plus it offers a generous 45-day money-back guarantee.

Interested? Why not check out the full Hotspot Shield review?

IPVanish is a fast, reliable VPN that’s capable of unblocking Netflix US and Japan, as well as Disney+. It has roughly 1,500 servers in 60+ countries, which means you shouldn’t have any performance issues, even during evenings or weekends. Further, while many services limit the number of devices you can connect, IPVanish is happy for you to secure your whole household simultaneously.

When it comes to security, users have plenty of tools at their disposal. There’s a kill switch, 256-bit encryption, and DNS leak protection for a start. Also included are a local traffic blocker and a feature that scrambles your data, hiding the fact that you’re using a VPN at all. IPVanish doesn’t keep any logs, making it ideal for anyone who values their online privacy. Customers can contact support staff at any time via live chat or email.

IPVanish apps are available for Windows, MacOS, iOS, and Android. The VPN can also be manually installed on Linux systems and supported home routers.

SPEED AND SECURITY:IPVanish is a fast, privacy-first service that keeps no logs and allows you to secure all of your devices at once. It works well with Netflix US and Disney+, plus it offers a 30-day money-back guarantee.

We take a closer look at this service in our full IPVanish review.

Which Marvel movies are on Netflix?

Netflix doesn’t have as many Marvel movies as it used to, with most having moved to Disney+, but there are still enough to keep you occupied for a while. What’s more, Disney is reportedly hesitant to put its more adult-focused titles (like the Deadpool movies) on Disney+. Accordingly, there’s definitely potential for a kind of two-platform approach as far as new releases are concerned. Below, we explain which Marvel movies are available on Netflix as well as which libraries they’re included in.

Here are the Marvel movies on Netflix:

How to watch all the Marvel Movies in Order

There are multiple orders you can watch the Marvel Movies in, you can choose to go by release date and start with Iron Man or chronologically and start with Captain America: The First Avenger. You may even want to opt for the spaghetti order and base which film you watch next on the credit clip at the end of each film. Below we’ve listed all the Marvel films which are not on Netflix can be found on Disney+ so you can get started with your Marvel marathon.

Here’s a full list of the Marvel movies that are not on Netflix but are on Disney+:

Note: Deadpool 2 is not available on either platform, but it is on Hulu. Additionally, outside of the US, you can rent it on services like Amazon Prime Video, Google Play, or YouTube.