How to Stop Robocalls and Spam Calls in 6 Easy Steps

Are you asking yourself why you get so many spam calls? Find out how to stop robocalls and spam calls with the simple steps we offer in this extensive phone spam blocking guide.
Sam Cook Data journalist, privacy advocate and cord-cutting expert 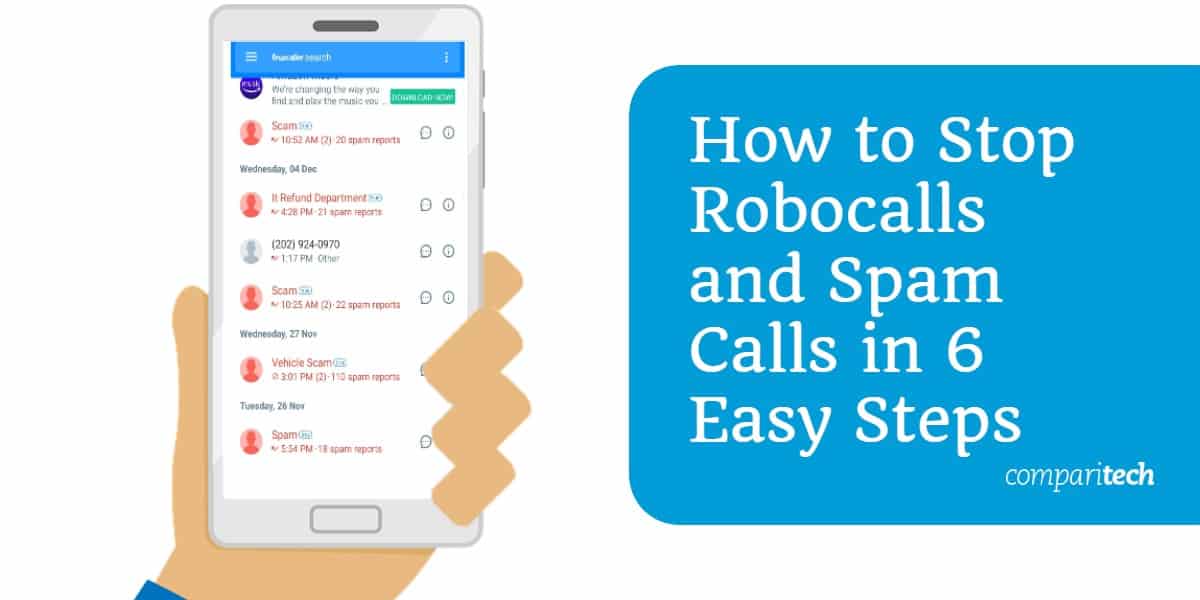 Chances are high that if you have a mobile phone, you’re also regularly buffeted with robocalls and spam calls. Despite numerous federal and local government attempts to legislate away a distinctly technological problem, spam calls and robocalls won’t stop anytime soon. And since our overwhelming dependence on mobile phones also isn’t slowing down, your best option is to take measures into your own hands. There are several steps you can take to help stop robocalls and spam calls from reaching your phone, most of which take only a minute to set up.

Why am I getting so many spam calls on my cell phone?

In its 2018 report annual report, robocall blocking software company Truecaller found Americans receive an average of 18 spam calls per month. For some Americans, the situation is much worse. I did an analysis on the state of my own phone spam, for example, and found I average around 2.4 calls per day, which is more than 45 per spam calls per month.

How to stop robocalls and spam calls

If you’ve been suffering regular spam calls and robocalls then there are a few steps you can take to reduce the number of calls you receive. Below are 6 ways you can prevent or reduce spam calls, plus guides to the best spam call blocking apps on the market.

There are a handful of anti-spam methods you can try, but few are as effective as installing a robocall or spam call blocking apps. These apps are designed to identify spam calls using a variety of different methods, including publicly-available spam number listings, user-tagged spam numbers, and artificial intelligence that detects and tags numbers that are likely to be spam.

Most spam blocking apps come with a variety of features, including caller-ID notifications of scam numbers, auto-blocking features, and even call recording features that allow you to record and share your scam calls.

There’s currently a long list of apps available for both Android and iOS devices that claim to be able to block spam calls, as well. However, a few are notably more trustworthy than the rest.

Here are the basics for Robo Shield:

Robo Shield has done an impressive job getting its name out there. It’s risen in the ranks among robocall and spam call blockers thanks in no small part to the fact that it works. That may seem like a minimum requirement, but anyone who’s tried some of the many free call blocking apps on the market can attest to the fact that this is a service that’s quite easy to get wrong. 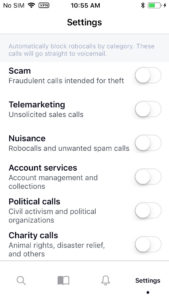 The key features offered by Robo Shield include:

The biggest downside of this service is the price. At $12.99 per month, Robo Shield is a distinctly premium service. However, the inclusion of other beneficial services, including VPN, password management, and identify theft protection, may make it just the service you need to maximize your privacy protection.

Unequivocally the best option for Android users, Truecaller has been my go-to spam call blocking app for several years. It’s also one of the most trustworthy and highest-ranking spam call apps available on both Android and iOS and offers both an ad-supported free and paid option. The app has over 500 million installs, making it one of the most-used in this space.

Here are the basics for Truecaller:

Truecaller has refined its spam blocking app over the several years that it’s been on the market. It’s currently one of the most respected spam call blockers available thanks to how effectively it works and because it doesn’t place its core features behind a paywall. And as the only free option on our list (most free options have very limited features and tend to perform poorly), it’s one robocall blocking app everyone should consider. 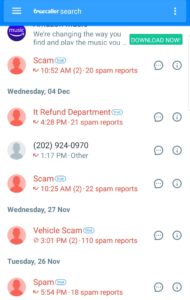 For free, this app provides the following features:

The Premium and Gold options vastly extend the features available from this app. If you choose to subscribe, you’ll get:

As a regular user, I’ll attest to the fact that Truecaller free may be all you need from this app. That said, some of the premium features may be interesting to you, but they’re also altogether unnecessary based on what you’ll most need out of the app.

RoboKiller is perhaps the quirkiest option on the list, but also one of the most popular you’ll find. The app removes spam calls using some unique methodology that routes spam numbers, answers them, and then records a spam “fingerprint”. From there, it adds that number to the spam list and blocks all further calls from that number for you and everyone else using the service.

Here are the basics for RoboKiller:

Why are the Android reviews so poor, you ask? It’s all in the expectations. Android users tend to prefer free apps and are often more critical of paid apps, especially when those apps don’t work as expected. However, many of the negative Android user reviews relate to being charged a subscription fee at all.

RoboKiller’s Android functionality is also still fairly limited. The app has some additional device-specific requirements that cause it to fail on many lower-end Android devices. Additionally, RoboKiller requires you to have a phone running on a cell phone carrier that offers “Conditional Call Forwarding”.

Because of the aforementioned call forwarding it does as a core part of its blocking methodology, it doesn’t work with down-market services (specifically, mobile virtual network operators like MetroPCS and Cricket Wireless) that purchase space on major service networks with limited network features.

RoboKiller is best experienced on iOS devices running on a top-tier mobile network, which is reflected in the good iOS App Store reviews. 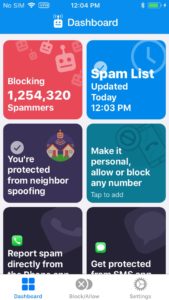 As stated, this option has a unique approach. RoboKiller deploys what it calls “answer bots”. These bots route your calls to a different location using Conditional Call Forwarding, where they’re answered and recorded by RoboKiller. The goal is to not only ID or fingerprint the number and caller but to also waste their time. So, instead of just having the call blocked and allowing the scammer to move on to the next victim, RoboKiller imparts a bit of payback even as it blocks numbers for you.

Dozens of apps claim to block spam. Some even come in the form of physical devices designed to protect your landlines. The best thing you can do is to test out a few to figure out which options best suit your needs. Most paid apps have a free trial, while the free apps (all ad-supported) can all be downloaded with little to no hassle.

Just make sure to focus on apps that look trustworthy based on app reviews.

2. Ask your service provider for a new phone number

One way to reduce your phone spam calls is to get a new number. Every mobile phone provider has a database of numbers that it owns, and that it assigns to new subscribers. As a standard practice, most phone service providers recycle unused numbers.

You can request a new number from your service provider at any time. Some providers will even let you pick or create your own number, with some limitations.

When requesting a new number, see if you can get a number that’s never been used before by your service provider. Your provider may or may not honor that request. It’s also possible your provider only has recycled numbers in its database. Either way, there’s no harm in asking for some fresh digits.

3. Use a Google Voice or other VoIP number

The benefit here is that you can give all of your trusted contacts your Google Voice number and leave your regular number for spam callers. That way, you’ll always know you can pick up the phone when a number comes through Google Voice.

Alternatively, you can use your Google Voice number to sign up to websites that require a number for registration. This can help reduce the potential that your real number gets stolen in data breaches and could reduce the number of robocalls and spam calls you receive to your phone. You can also set it up so that calls to your Google Voice number don’t appear on your phone, meaning you can completely avoid them.

You can also apply this principle to other VoIP services and apps, such as Burner, Text Free, or 2nd Line.

The biggest limitation of this route is that you’ll need a data connection to get phone calls from these VoIP services. For those in and around cities, this is not going to be a problem. However, if you live in a more rural community, you may find your notably poor data connection (if you can get one at all) don’t make VoIP a viable option.

Several countries have attempted to pass laws banning unwanted phone calls, including by establishing “do not call” lists and registries. Consumers can voluntarily submit their phone numbers (landline and mobile) to these “do not call” lists. Businesses and organizations must regularly access these lists and may face stiff financial penalties for making unsolicited marketing or sales calls to registered numbers.

Depending on where you live, you may want to submit your number to one of the following national “do not call” registries:

Don’t see your country listed? Many countries currently lack a nationalized “do not call” registry. The above list is not exhaustive, however, so you may need to do some individual research to determine if your country currently has a registry.

A note on “do not call” lists

Most robocalls and spam calls are now generated by scammers who digitally mask their true identities behind Voice over Internet Protocol (VoIP) services. Scam callers care very little about the legal repercussions associated with official “do not call” registries, and actively employ technologies to hide their real numbers and locations. And in fact, some robocall and scam call operations may collect the public data from these registries and target those individuals who have signed up.

We say this to help readers understand that the national “do not call” lists can have an impact, but they will never completely eliminate robocalls and scam calls. In fact, you may even increase the number of scam calls you receive, especially if your number has never been listed online anywhere or has never been part of a data breach.

Nevertheless, if you’re receiving a large number of unwanted robocalls and spam calls from official businesses, your country’s “do not call” registry may be an effective way to reduce some of the unwanted calls you receive.

Mobile service providers have struggled to keep up with scam callers, and especially those scammers who are spoofing numbers to get past caller ID. Thankfully, some service providers are starting to employ artificial intelligence within their networks to block calls.

US phone users may also be happy to know that the Federal Communications Commission (FCC) passed a rule in early 2019 that allows phone services to automatically block robocalls. This rule change opens up that option for service providers to take a more active approach.

Every major US telecom service now offers built-in call blocking, including Verizon Wireless, AT&T, and T-Mobile. If you’re on a mobile virtual network operator (MNVO), such as Ting, FreedomPop, MetroPCS, or Mint Mobile, which purchase space on the major networks, you may not have access to those provider-based services.