ABC Kodi addons: How to watch ABC on Kodi legally

Kodi is a great way to organize your media, with addons for just about every purpose. In addition to streaming movies, anime, and sports, it can even be used to access major cable channels like ABC. Below, we’ll explain which Kodi addons are best for streaming ABC and walk you through the setup process.

There are many addons that offer access to ABC’s content, but the majority of them don’t use licensed sources, and as such, aren’t legal. That said, there is still one legitimate ABC addon for Kodi, and it’s completely free to use.

Did you know that your service provider can see exactly what you get up to online? This is how they’re able to limit your speeds whenever you stream, and to make matters worse, many ISPs sell details of user activities to advertisers. The good news is that you can prevent both of these problems with a Virtual Private Network (VPN).

That’s why we recommend NordVPN. This is one of the fastest providers on the market and it follows a true zero-logs policy, meaning it can’t reveal your browsing habits to anyone. Better still, it offers a wide range of security tools and apps for all kinds of devices including Windows, Mac, iOS and the Amazon Firestick.

Below, we’ll list official Kodi addons that offer ABC streams. All of the following addons use official sources and best of all, they’re all free to use. 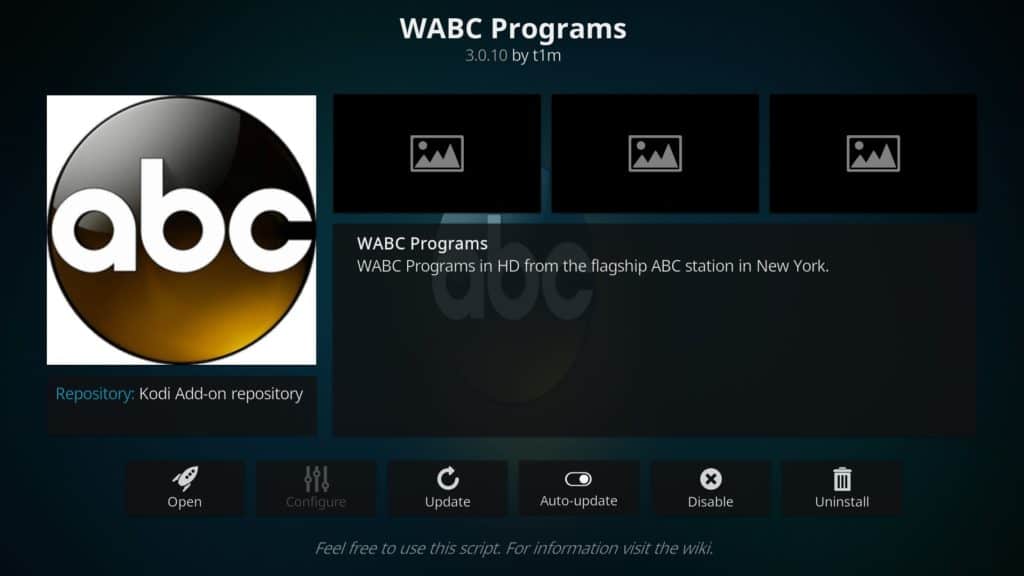 Update: at the time of writing, WABC Programs is experiencing some problems due to recent changes in the way ABC’s site works. We anticipate that these issues will be ironed out fairly soon but keep an eye on the addon’s forum page for the latest info.

The WABC Programs addon is the easiest way to watch on-demand ABC content. It displays every available title on a single page, making it easy to use Kodi’s search function to find something specific. There are no customization options, so it really is a case of “what you see is what you get.”

The library appears to be organized alphabetically, but towards the bottom, it starts to get considerably less straightforward. There are duplicate folders, videos with titles like “Vdka4087511,” and in one case, an inaccessible folder with no name whatsoever. Despite these anomalies, the first half of the library works as you’d expect, so there’s really no need to go this far down the list in the first place.

There’s a good mixture of old and new content on here, with classics like Flashforward and America’s Funniest Home Videos alongside more modern releases such as Marvel’s Agents of Shield. Content is updated frequently, as evidenced by the availability of up-to-date Good Morning America episodes. This is because the content is scraped right from ABC’s official website.

ABC’s content is only available from within the US, so you’ll need a VPN to watch from overseas. ABC’s region-locking isn’t infallible, though, as NordVPN still works.

The WABC Programs addon can be found in the official Kodi addon repository.

Unfortunately, not all addons use official sources for their streams. Below, we’ve listed some of the most popular third-party Kodi addons that are frequently recommended on less than reputable forums. It’s important to note that this is not an endorsement; it can be difficult to tell if an addon is legitimate or not, and the list below is intended to remove any doubt.

Can I stream other cable channels on Kodi too?

The official Kodi repo includes addons for a surprisingly large number of TV channels, not just ABC. For instance, you'll find addons for streaming Adult Swim, Cooking Channel, PBS Kids, and NBC to name a few. There are also lots of European and Canadian channels to take a look at, such as CBC, BBC, and Mediaset.

What kind of content can I watch on Kodi?

Kodi is extremely versatile, and part of this is thanks to its vibrant addon development scene. People have created addons for all kinds of content, whether it's live TV, sports, cartoons, anime, or movies. In short, whether you're looking to stream a high-profile boxing match or an indie documentary, you should be able to find it in the official Kodi repo.