Kodi builds are a great way to get specialized skins and customized settings without having to do the hard work yourself. Here are the best Kodi builds that will give you a wholly unique Kodi experience.
William Elcock

The best Kodi builds of 2022 are listed right here!

The Kodi media player is a high-powered but bare-bones media player that’s greatly enhanced by its thriving addon infrastructure. You can install addons one-by-one, or just install a Kodi build that includes a library of popular addons and a unique skin (or theme) that changes Kodi’s look and feel.

If you’re new to Kodi, a build can reduce the time it takes to get up and running and save you a significant amount of time and frustration if you’re trying to install Kodi on a streaming device like the Amazon Firestick, Apple TV, Android, iPhone, or Raspberry Pi.

There are hundreds of Kodi builds available across the web and while we haven’t tested everything that’s out there, we have managed to find a few that really stand out. It’s worth mentioning that we’re predominantly looking for aesthetics and usability, since most builds aren’t exactly well-organized or pleasing to the eye.

The best Kodi addon builds for 2022 include:

SPECIAL NOTE: Kodi builds can put you at risk if you install the wrong ones or allow them to install and update addons without your knowledge. We highly recommend you ONLY use these builds for the skins, customization options, and legitimate addons they include, and that you delete any infringing addons you find within them.

The best thing to do when starting with a build is to have a fresh Kodi installation. You can download a fresh installing at kodi.tv/download. A fresh install will help prevent any issues with installation conflicts between the build installation and other add-ons you may have already installed.

Warning: your Kodi streams are not secure

Kodi addons tend to scrape streams from online sources, so your ISP can track you and see exactly which sites you’re pulling from. Not only that, but some addons stream content from P2P networks, meaning your IP address is visible to anyone else who’s sharing or downloading the same file. There is a way to stop this, though: connect to a Virtual Private Network (VPN).

Among the best options we’ve tested for Kodi build users is NordVPN. It’s extremely fast and packed with security features, as well as a verified no-logs policy. With dedicated apps for almost every platform including Amazon Fire Stick, it’s a great choice for anyone hoping to securely stream Kodi.

Reader deal: NordVPN is offering our readers 60 percent off the price of a two-year plan. For alternate choices see our list of the best VPNs for Kodi.

When we talk about the “best” builds below, what we mean are the builds that have the best user interface for Kodi and provide the best overall experience. These are also the builds everyone is talking about, meaning we’ve only listed builds that are heavily user-approved. We also walk you through how to install each Kodi build below. 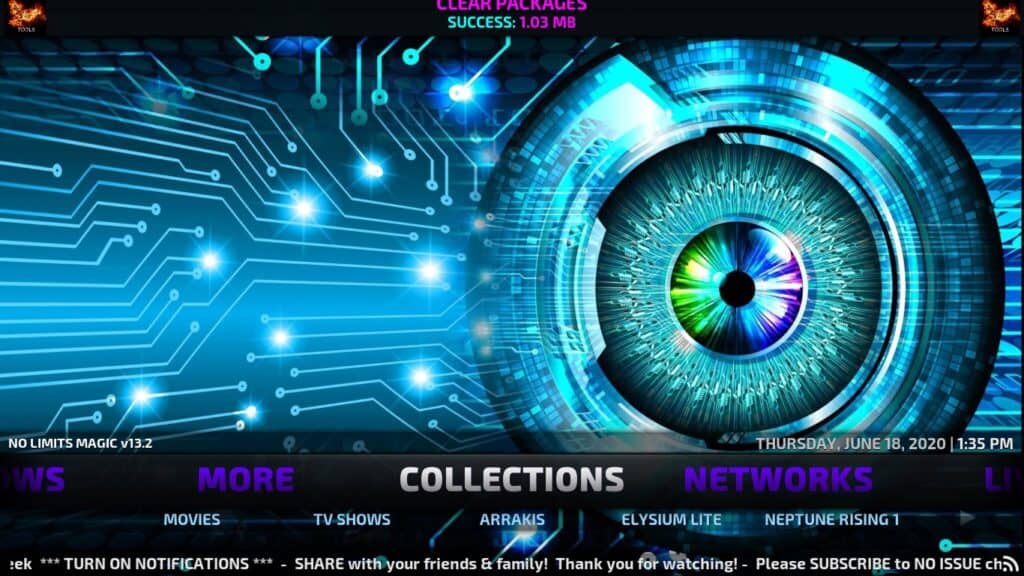 Installable from: No Limits Wizard

The Kodi No Limits Build comes in several flavors, which include versions that have adult sections and those that don’t. You can also install a Lite or Full version of the build, so the download size can vary depending on the version you choose.

Unlike some other builds, Kodi No Limits Build lets you install over top of your current build so you don’t have to completely erase or delete addons that are already installed. However, note that installing a build on top of another build might break something in the installation, so it’s a good idea to do a fresh install.

Inside, you’ll find sections for TV Shows, Movies, Sports, Live TV, and more. Kodi No Limits Magic runs on the Aeon Nox SiLVO skin, which you can download and install separately from the developer. If all you’re looking for is that great Kodi skin without having to go through the process of deleting unwanted addons, we recommend installing the skin instead of the build. 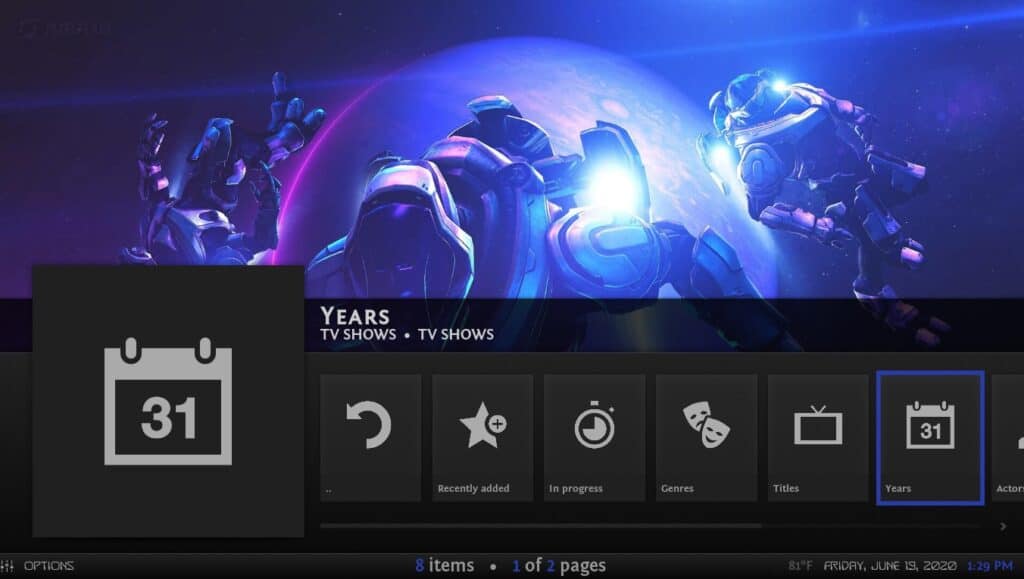 MisFit Mods Lite is one of the most attractive Kodi mods around. Delivered with a rather explosive loading screen, the entire theme is designed with a heavily specialized format that makes it easy to access the best features that Kodi has to offer.

You’ll find this build in the MisFit Mods Wizard. If you’re installing it on a limited-resource device, like the Amazon Firestick, make sure you choose the “Lite” version, as indicated in the title of this section. The build can be slow to load even with the Lite version because of all of the thematic modifications, so make sure you’re using the one best suited for your device. 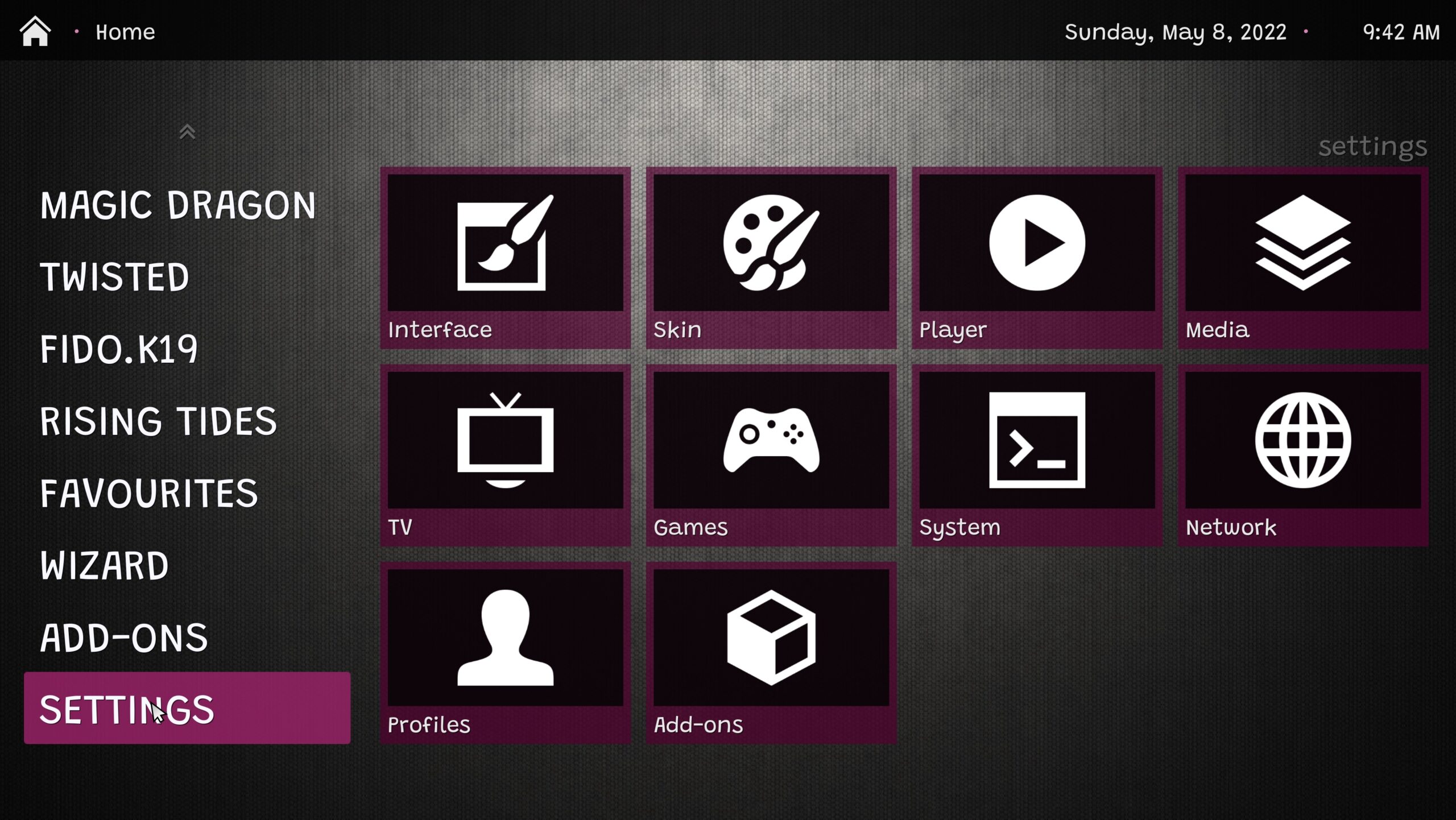 Doomzday actually has quite a few different builds available, but we’re focusing on The Small Build today. It’s nice and lightweight, with a subtle design and just a few addons included (although you’ll want to delete these since they’re all copyright-infringing). This build is pretty customizable too; its menus can be horizontal if you’d prefer, and plenty of wallpaper addons are supported in case you get bored of the metallic effect. 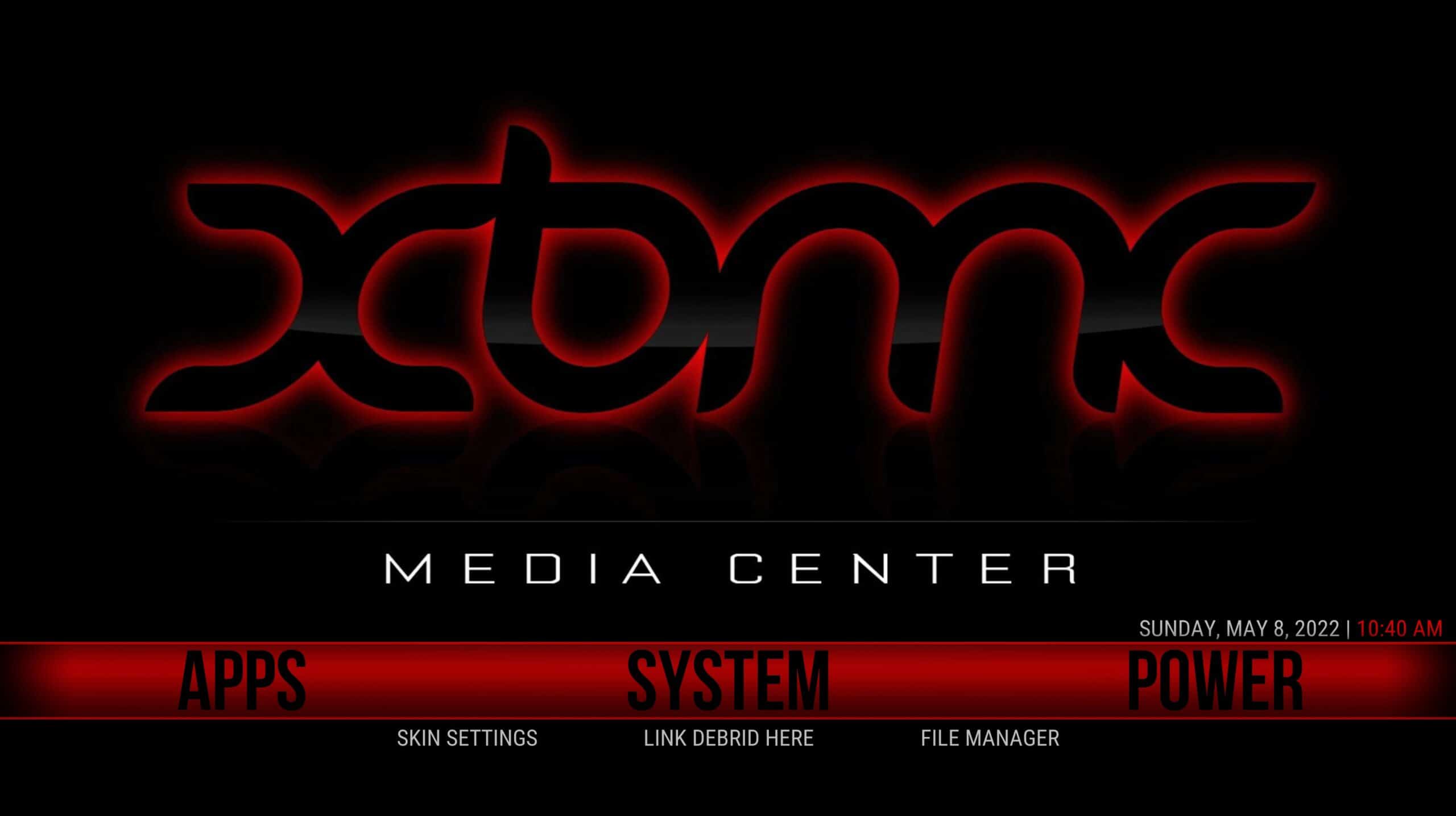 Breezz Lite earns a spot in our list for how remote-friendly and customizable it is. Not a fan of the red color scheme? No problem: just switch colors in the skin settings menu. You can also choose to rename any of the upper menu items, change which content your addons show, and give each item a custom background. There are only a handful of copyright-infringing addons included, so it’s quick and easy to remove these and start over fresh. 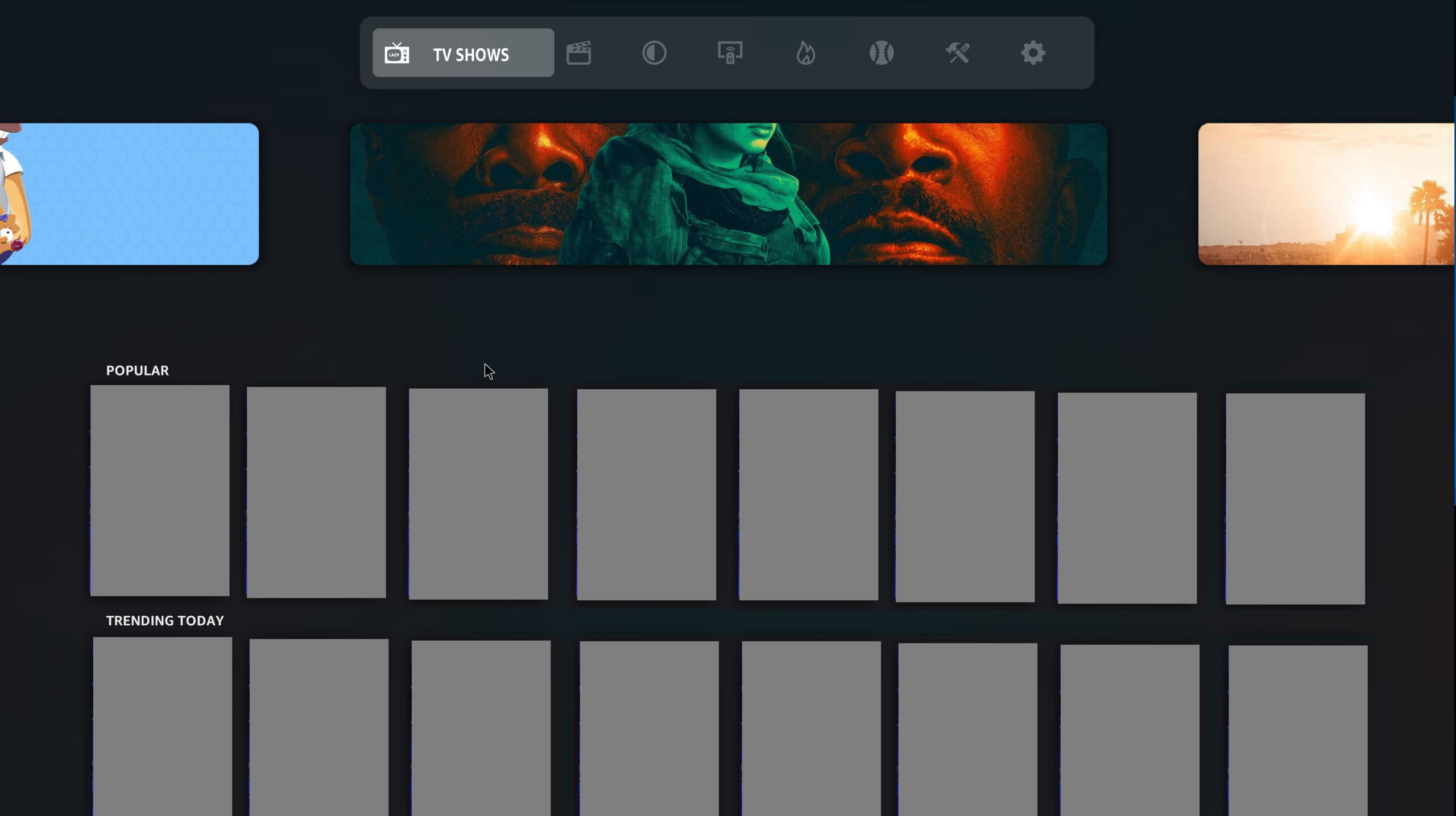 This build could almost pass for a video-on-demand service thanks to its clean design, neatly organized tabs, and the drop-down info panel that appears whenever you hover over a title. Naturally, you can customize the display to change the colors or move certain elements around if you’d like.

There are a few copyright-infringing addons that you’ll have to remove but on the plus side, this build can be installed over another, meaning you can keep all of your existing addons.

How to install a Kodi build

How to delete unwanted pirate add-ons

The main reason you’re installing Kodi builds is to get the extra features not typically located in a bare Kodi media center install. However, builds often include a variety of copyright-infringing addons. Thankfully, you can delete these and replace them with legitimate TV addons pretty easily.

This process will look different in different builds, as the skins change how your Kodi looks and feels. Nevertheless, you can follow this generic process with almost any build:

Your unwanted addon will now be uninstalled from your Kodi build. Note, however, that this will not actually delete the unwanted addon entirely. If you want to completely remove an addon, you will need to find the zip file for the build you installed, open it, and delete the appropriate plugin.

Unfortunately, when you download a Kodi build, there’s no way to really know what addons or addon repositories are getting added to your Kodi installation until after the build is installed.

All of the builds on this list have been tested and deemed safe at the time we tested them.

However, it’s worth remembering that your build zip file may have been updated or hijacked to include addons or programs you don’t expect. In other words, you may unintentionally install malware during the process.

This happened to one Kodi user and tester, who posted a warning about it on the popular third-party Kodi Reddit forum, /r/Addons4Kodi. That user found that he had installed a cryptocurrency coin mining trojan while testing different builds.

We recommend running an antivirus program on any device you use with Kodi. That’s because once-popular addons, such as GAIA and Bubbles, have previously been hijacked, spreading malware without users’ knowledge. Luckily, there are many free, high-quality antivirus apps for Windows, Mac, and Android devices.