What is Containerization in Networking?

Until very recently, containerization was an obscure technology, only known to a few specialists. Today, however, the methodologies of containerization have become mainstream and every networking professional needs to understand what the term means.
Stephen Cooper 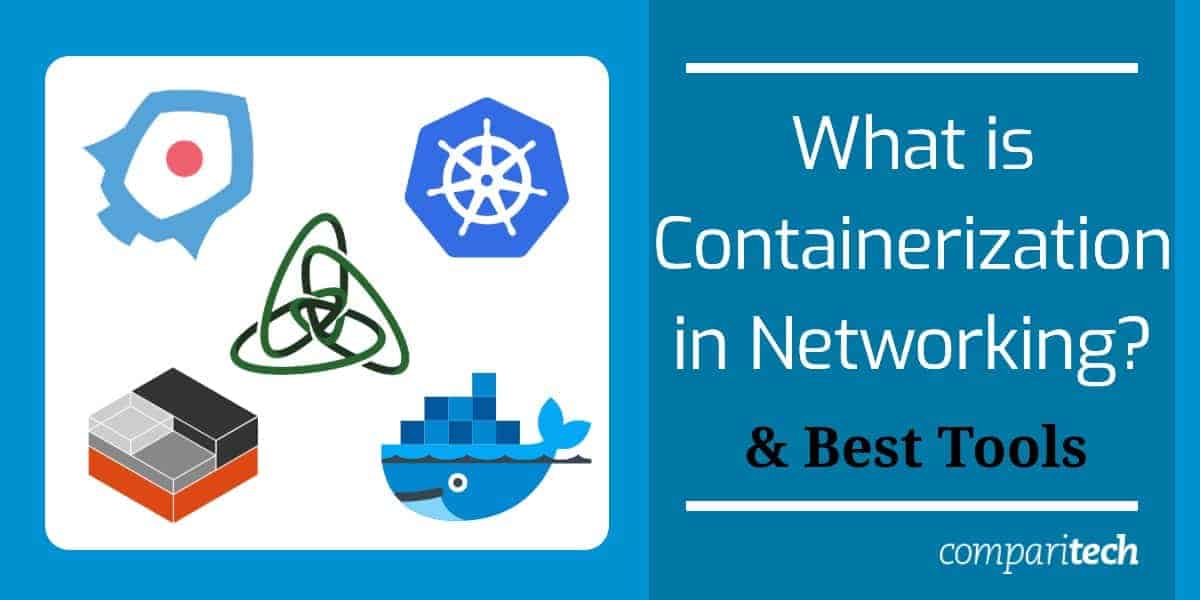 Containerization is a form of virtualization that helps transport the delivery of apps over a network to user endpoints.

A standard Virtual Machine (VM) provides an application written for a different operating system the support that it needs to run. In virtualization, the operating system needed for the application floats on top of the actual system running the host machine, enabling the incompatible application to access required resources on the machine.

The difference between VMs and containerization

VMs create separate identities for one host, enabling one computer to be represented to the outside world as though it were many physical machines.

You don’t need to install that extra layer of the virtual operating system on the receiving machine permanently. This makes a containerized application much more portable because it removes the requirements for pre-installed software, services, or operating systems on the target computer. Containerized applications can even be run on bare metal hosts and remote or cloud servers with unknown environments.

The proximity of the operating system services to the applications that need them within the container also means that containerization delivers faster response times to end users than a virtual machine. There are far fewer fetches across the network needed for a delivered containerized application to operate than a remotely accessed VM.

Bring your own device (BYOD)

Applications can be made available over the network for staff to access on their own devices. The container acts as an immunizer, creating a barrier between the corporate application and the user-owned device. However, this mediation has to be managed properly because the container does get access to the device’s kernel.

Nonetheless, containerization provides a security benefit for the organization delivering the application because it removes the need to give direct access to the network to the user. This reduces the risk of virus infection to the corporate infrastructure in BYOD environments.

Containerization is also useful for software license control because the application can be easily withdrawn from use at any time. As the application was never actually installed on the remote device, it can be suspended should the owner of the device leave the organization or if the device gets stolen.

Communication between applications running in separate containers can be enabled through APIs, so the amount of integration and coordination or, at the other end of the scale, isolation, can be controlled.

Containers can be withheld, which makes it easier to track and control access to software from remote devices. This is a very useful tool for providers who make their software available from the cloud on a subscription basis. Essentially, the container creates a temporary partition on the host device and that partition can be suspended by the provider.

The ability to deliver software to incompatible devices without the need to install supporting services is particularly useful to cloud services because it expands the method of delivery for an application beyond the use of browsers for access.

Where do I get a containerization software?

There are many containerization systems available and many of them are free to use. This list details the best systems that you could try.

Docker is the most famous containerization system. Whereas most containerization environments are only made for Linux, this package will also run on Windows. Better yet, the system is an open-source project and is absolutely free to use. There are paid versions. The free option is called the Community Edition. You have to download the code for Docker CE from a GitHub repository. The software can be installed on Fedora, Ubuntu, CentOS, and Debian Linux and it is also available for Mac OS and Windows 10.

LXC is short for Linux Containers. This is one of the oldest containerization systems and is still very influential, although it has been overtaken in popularity by Docker. LXC pre-dates Docker by three years.

As the name suggests, this system is only available for Linux – it is already bundled into Ubuntu. You need a Linux 3.8 kernel or newer in order to create LXC containers.

LXC is completely free to use. However, with only a command-line environment, it is not as easy to learn as Docker, which goes a long way to explain why Docker became the star of the containerization world. 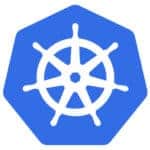 Kubernetes is probably the only alternative to Docker that stands any chance of becoming the number one containerization system. It is an open-source project that was created by and is managed by Google. So, this system has a lot of clout behind it. This system is part of the Google Cloud family of products.

You create containers through the Google Kubernetes Engine (GKE). This is a cloud-based environment, but you can get an installed version to run on your own hosts, which is called GKE On-Prem. As an open-source project, the code is available for anyone to create their own version of the tool. This proliferation has occurred through integrations with front end tools, rather than through forks of the original code. Among variants, you will find the Azure Kubernetes Service, which is available on the Azure cloud platform.

The rkt name of this containerization system is pronounced “rocket.” This is another open-source project that was started up in 2014 with the aim of providing a replacement for Docker in the wider containerization system called Container Linux, which is not to be confused with Linux Containers (LXC). The rkt system installs on Linux and is designed as a method for delivering applications from cloud-based services.

Originally called CoreOS Linux, Container Linux is a lightweight operating system and CoreOS rkt is a containerization system that delivers Container Linux over networks. It can also be used on ArchLinux, Fedora, NixOS, CentOS, Ubuntu, and openSUSE.

OpenVZ is an abbreviation for Open Virtuozzo. This system was devised in 2005, making it older than LXC. This containerization package runs on Linux. The Virtuozzo part of the name comes from the forerunner of this system, which is still available today. Virtuozzo was developed by a private company and was the first implementation of containers. This environment was released in 2000 and a free, open-source version of the technology was made available as OpenVZ.

As with any virtualization system, containers can be difficult to monitor. Performance impairment in the delivery of containers could be due to a failure in any one of a number of layers in the network stack. So, you need a comprehensive monitoring system to ensure consistent delivery. We recommend Paessler PRTG and the SolarWinds Server & Application Monitor for this task.

What should you look for in a containerization system for your business?

We reviewed the market for container packages and container monitoring software and analyzed tools based on the following criteria:

With these selection criteria in mind, we looked for containerization systems and container monitoring tools that will improve security and reduce costs and time. 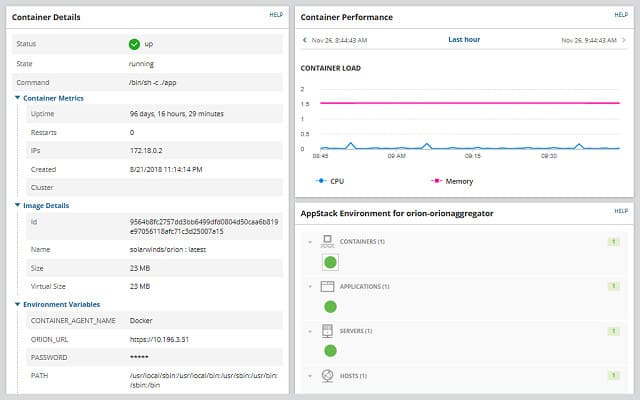 The SolarWinds Server & Application Monitor (or SAM) is suitable for keeping track of the health of all types of virtualizations, including containers.

The console of the tool includes visualizations of live traffic data and has a specific section for monitoring containers. The Server and Application Monitor is part of a suite of IT infrastructure management tools, which all fit together because they were built on a common platform, called Orion. You can improve your network visibility by installing the Network Performance Monitor to complement the Server and Application Monitor.

SolarWinds Server & Application Monitor installs on Windows Server and you can get it on a 30-day free trial. 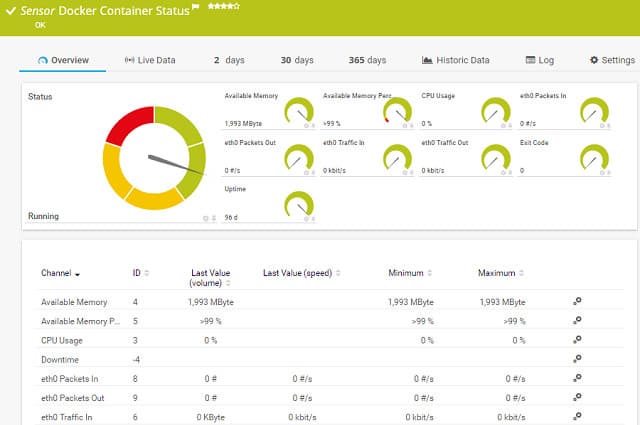 PRTG by Paessler is a three-in-one monitor covering networks, servers, and applications, so it has all of the elements that you need in order to identify which supporting layer might be about to slow down your container performance. The package includes a useful “sunburst” status chart, which displays all the stack layers that support an operating end-user application.

The PRTG system runs on Windows Server and it is a collection of monitors, which are called “sensors.” The bundle contains a very wide range of specialized sensors and one of those is the Docker Sensor.

Paessler offers PRTG on a 30-day free trial and there is also a free version of the system, which has a limit of 100 active sensors.

If you haven’t had to consider containerization yet, then the field that is most likely to introduce you to the need for the technology is probably Mobile Device Management (MDM). Containerization is a great option for the delivery of applications to mobile devices, which can easily be lost or stolen. Containers also offer a good solution to running your corporate apps on user-owned devices. 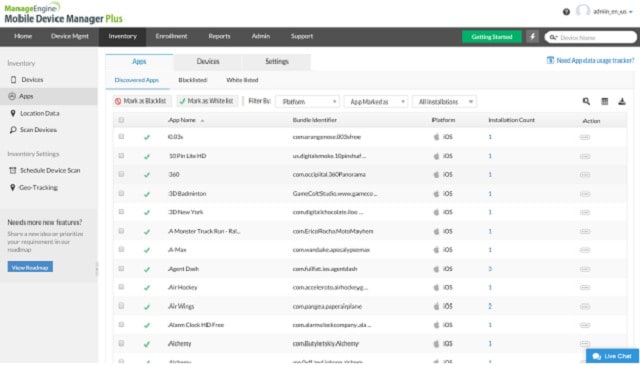 Containerization is just one of the useful tools contained in Mobile Device Manager Plus from ManageEngine. The tool deploys containerization for data access through its mobile content management system and also its mobile application management. This is particularly necessary if your business uses a BYOD model. The containerization of corporate data and services ensures that the user’s own apps and data are kept separate from business functions.

The system is free to manage up to 25 devices and there is a 30-day free trial for the paid plans. ManageEngine Mobile Device Manager Plus installs on Windows Server and Linux. Devices under management can be running Android or iOS. 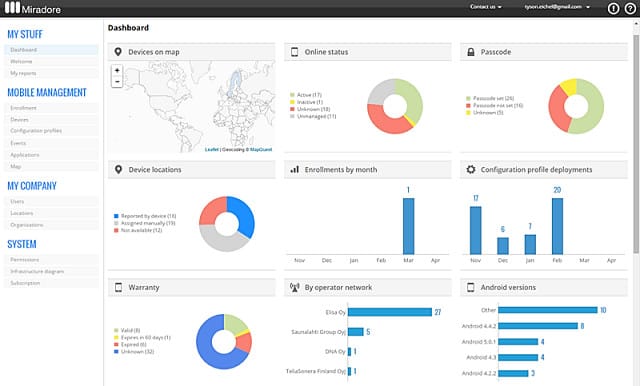 As the name suggests, the Miradore Online Device Management system is a cloud-based platform. So, you don’t need to bother installing or maintaining software on your premises in order to use it. The service is available in four service levels, with the lowest being free to use. The paid plans are very reasonably priced and are charged per managed device per month, so you can get started monitoring a small team’s mobile devices and add on subscriptions as your company expands.

Mirador uses secure containers for all of its communications with Android devices. The system is also able to manage mobile devices running iOS.

Although difficult to conceptualize, containerization could be the answer to your infrastructure requirements for the delivery of services to remote devices. Hopefully, after reading this page, you are in a better position to start on your containerization adoption strategy.