A guide to message switched networks 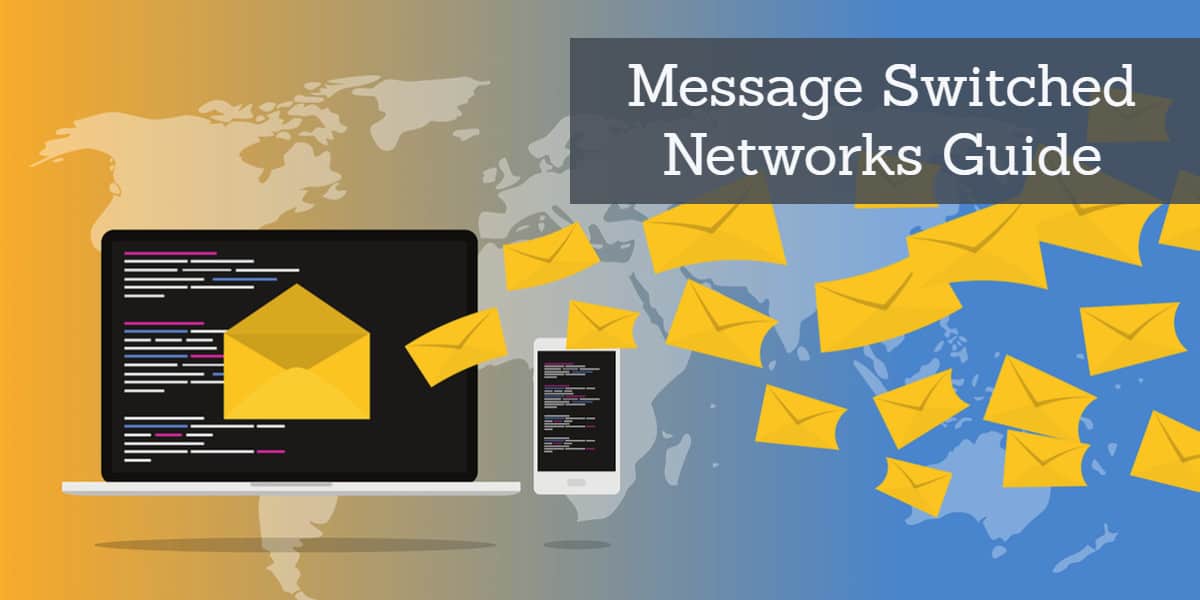 You may have heard of message switching and wonder whether to implement it for your company’s network. This brief guide explains what message switching is and why you probably won’t end up using it on your LAN.

There are three connection management types:

Each of these systems is a progression, so circuit switching came first, then message switching, and then packet switching.

Circuit switching is the oldest form of network and it dates back to the early telephone system. In circuit switching a path is created between two endpoints by a physical circuit. For example, those old “switchboards” that you sometimes see in black and white movies were circuit switched networks. The operator used short cables that had plugs on each end. The switchboard contained an array of sockets. A line from each telephone in the building terminated at a socket in the switchboard, so when the operator plugged a lead into two sockets, a bridge was created that linked the two lines together temporarily. As phone systems advanced, the circuit connection mechanism became electronic, but the methodology of making a temporary connection to complete a circuit still held true.

Message switching was an efficiency improvement that arose as an advancement in circuit switching. Rather than focusing on creating temporarily fixed links between two endpoints, the message switched network is made up of a number of routing devices that forward on messages along different branches of a network. So, when data is sent from one point, it first goes to the switch to which that device is connected. The switch forwards on the data, either directly to a connected recipient, or through another intermediate switch.

As an electronic system, rather than a mechanical one, the message switching methodology included some advantages over the circuit-switched network. “Store and forward” capabilities meant that communications could still progress even if a segment of the network was congested. The forwarding of messages through several segments on the network reduced the amount of cabling needed to link all data terminals together. This created a number of trunk routes in the networks down which messages from many different sources could travel.

The benefits of message switches also translated as disadvantages for a voice system. This is because the storage of data at switches, and the delays caused by access waits for shared medium, meant that interactive communications could not be carried fast enough. This strategy, however, was very well-suited for the telegraph system and was also a great boon to early email networks.

Early data networks were well served by message switching. As the price of PCs and other digital equipment, such as printers, started to fall, the number of endpoints attached to a typical business network began to increase. This increased demand put a strain on the message switching infrastructure. Data streams were sent in their entirety, so the prospects of sending video, or even digital images over a message switched network made communications really slow and networks became extremely expensive. As each message had to be stored temporarily on a switch, those switches needed a lot of memory. This was at a time when storage space was very expensive. Also, the length of time it took for a switch to receive an entire message, store it, establish a link to the next switch along and then send the entire message before dealing with the next incoming message meant networks became very slow.

Despite the fact that technological development kept improving cable quality and thus increasing transfer speeds and capacity, the message switching solution could not keep pace with demand at a viable price. The system was improved by packet switching.

Messages sent over a data network could be very long. Such data streams tied up the network cable on trunk routes and created transmission delays. The switches had to store messages for longer periods while waiting for access to the cable.

Data travels over network cable as an electronic pulse. When electricity is applied to a wire, it possesses the medium’s entire length all at once. A network cable is not like a motorway, you do not push a signal down it and send another signal along while the first signal is further down the wire. This is because signals don’t move. Both signals would occupy the entire length of the wire at the same time, their signals would merge, making their data meaningless. This situation is called “collision.”

In order to avoid collisions, a network card has to listen for a silence in the wire. With message switching, that silence took a long time to come. So, it was decided to split messages up into smaller chunks. This gave many devices a chance of getting a short amount of time on the wire without having to wait too long for a turn. The message needed to be reassembled by the receiver to get back to its original length. So the data segments needed to be accompanied by administration information that explained how to reassemble the message.

The need to associate administration data with the transported data gave rise to the concept of the “packet.” Message switching had already used the packet idea to put routing information on the front of messages. In packet switching, that header can also carry the packet’s sequence number, enabling the receiver to reassemble the message in its proper order. These packet identifiers also enabled receivers to spot when a packet went missing. Simply by sending a message back to the sender, the receiver could get that missing segment re-sent.

The most noticeable aspect of message switching that email still uses is the “store and forward” concept. When you send an email, the protocol that the messaging system uses never delivers the email to the end recipient. Instead, the Simple Mail Transfer Protocol (SMTP) marks the recipient’s associated email server as the final destination. It is the responsibility of the recipient’s mail client program to go and check for any waiting mail on the email server. This task is typically performed by the Post Office Protocol (POP) or the Internet Message Access Protocol (IMAP).

Interactive and high-data traffic applications such as Voice over IP and video streaming services broke the back of message switching. This finally made it clear that only packet switching could continue to keep up with the traffic demands of modern business applications and internet entertainment services.

Hardware continues to fall in price and collective provision of services through centralized points based in the Cloud continue to make more facilities available. However, although packet switching made data transfer quicker and more efficient, it has done nothing to reduce the constantly increasing traffic volumes that many networks experience.

In order to keep on top of your network bandwidth provision, you need to work out how to improve your network optimization. You also need to monitor your network equipment and watch network traffic patterns with bandwidth analyzers.

Although message switching helped improve networks for a while, the technology eventually became overwhelmed, got replaced, and is now obsolete.

Do you remember message switched networks? How do you keep an eye on the bottlenecks caused by traffic overcapacity at network switches? Leave a message in the Comments section below to share your experience with the community.