How to live stream Bellator Dublin (Queally vs Henderson)

Want to watch Bellator Dublin live online? We’ll let you know which networks are showing Bellator 285 in your country and give you a rundown of what to expect from the Queally vs Henderson fight.
Ian Garland Streaming, Kodi and VPN Expert 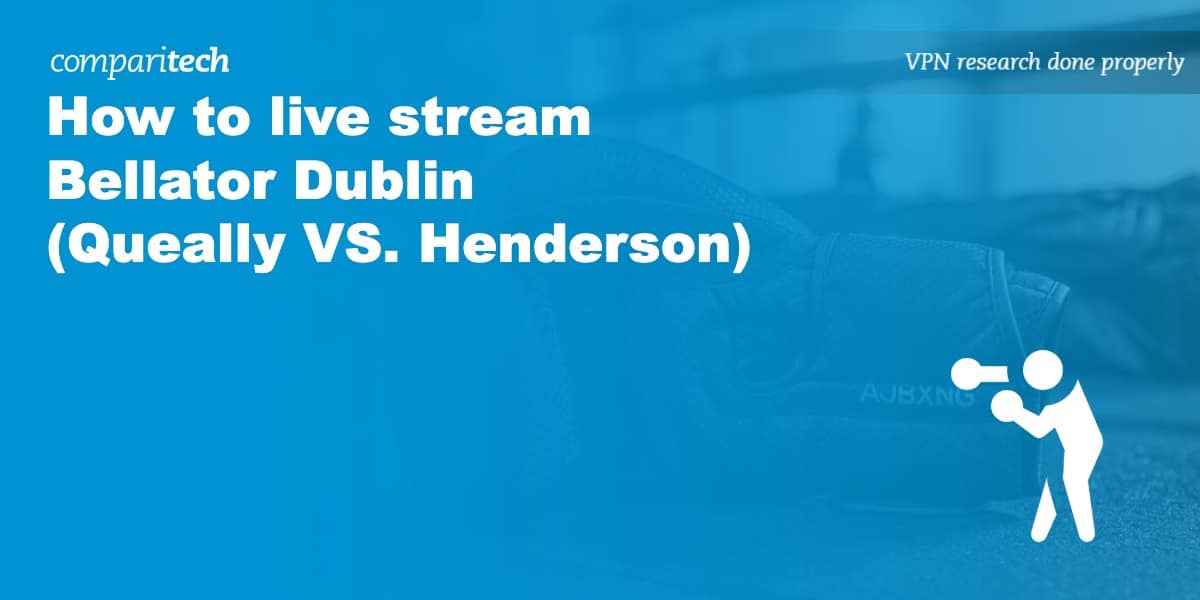 It doesn’t happen often but when Bellator hosts an event in Ireland, they’re always memorable! Bellator 285 is the latest in the Bellator Dublin series, and it’s coming to you live on September 23. The preliminary matches will begin at 17:30 BST (12:30 ET / 9:30 PT), with the main events starting at around 21:00 BST (16:00 ET / 13:00 PT). While the biggest fight is Queally vs Henderson, the rest of the card is equally interesting, and we’re about to explain how you can watch the whole thing online.

We only recommend watching official Bellator streams. These provide the highest-quality video, are far more reliable than unlicensed streams, and don’t have any chance of landing you in legal trouble. Besides, in most places, you can watch Bellator 285 for free anyway, meaning unofficial streams are effectively pointless.

All of the streaming services below are geo-blocked. You’ll need a Virtual Private Network (VPN) to regain access if you travel outside of your home country.

How to stream Bellator Dublin online from abroad

VPNs encrypt your internet traffic, hiding your activities from snoopers and protecting against ISP throttling. However, they can also help you use your favorite services from abroad. Here’s how to stream Bellator 285 from anywhere in the world:

Bellator Dublin will be shown live, which is why we strongly suggest testing your VPN before it begins. After all, nobody wants to miss part of a high-profile event because of technical trouble. Remember: the VPNs mentioned above all offer free 24/7 live chat, which makes resolving problems quick and easy.

NordVPN offers a fully-featured risk-free 30-day trial if you sign up at this page. You can use the VPN rated #1 for streaming live MMA with no restrictions for a full month. This is perfect for fight fans hoping to stream matches while traveling abroad.

How to watch Queally vs Henderson for free on UK TV

BBC is the official home of Bellator MMA in the UK. That’s great news for us, because the network’s streaming service, BBC iPlayer, is completely free to use. Bellator 285 will be broadcast live on BBC Three, with an on-demand replay coming shortly after the event finishes. What’s more, fans can rewatch older bouts as well, going all the way back to Bellator 255.

There are a couple of minor caveats, though. First, users have to create an account before they’re able to stream anything. During this process, you’ll be asked for a British postcode, but any will work; it doesn’t actually have to be yours. Secondly, UK law requires you to have a TV License in order to use BBC iPlayer – even if you’re only streaming on-demand content.

BBC iPlayer only works in the UK. Despite this, you can access it while traveling with the help of a British VPN server. NordVPN offers a 30-day money-back guarantee, allowing you to try it risk-free. If you’re unimpressed or just don’t need it once the event is over, simply cancel to receive a full refund.

Where else can I watch Bellator Dublin online?

Not in the UK? Don’t panic: Bellator Dublin will also be shown in a handful of other countries. Here’s how to stream the Queally vs Henderson fight where you are:

American fans can stream Bellator 285 live on Showtime, or wait until the following day to watch it on-demand. Here’s the best part: Showtime normally costs $10.99 USD per month but it comes with a 30-day trial. In other words, you can sign up, watch Bellator Dublin for free, then cancel to avoid being charged. You could also use the Showtime Anytime app if your cable TV plan includes this network.

Showtime is region-locked and isn’t normally accessible outside of the US. You can  continue watching as normal while abroad by connecting to an American VPN server.

The main card of Bellator 285 will air at 06:00 AEST on September 24. As always, this event will be shown on Network 10, meaning fans can stream it live on 10play. Don’t worry, you won’t have to stay up late to watch it, since it’ll be added to this service’s on-demand library shortly after the final bell.

Users will have to create an account before watching. This doesn’t cost anything but it does take a few minutes so be sure to do this ahead of time. Looking for something to keep you going until fight night? 10play doesn’t carry every prior Bellator event, but it does have an extensive catalog that goes as far back as Bellator 170.

10play won’t even let you visit its website if you’re outside of Australia. You can always use a VPN to get around this while on vacation abroad, though.

Who’s the favorite: Queally or Henderson?

At the time of writing, Benson Henderson is the strong favorite and it’s pretty easy to see why. To begin with, he has a small height and reach advantage, plus he’s five years younger than his opponent. You could argue that with age comes experience but Henderson actually has more pro fights (and wins) under his belt. The biggest problem Queally faces is that Henderson is exceptionally versatile, equally adept at winning by KO, submission, and decision. Meanwhile, only three of Queally’s bouts have ended with a stoppage, and the rest have been won on points.