How to watch Bellator ES 7 (McCourt vs Ruis) live online 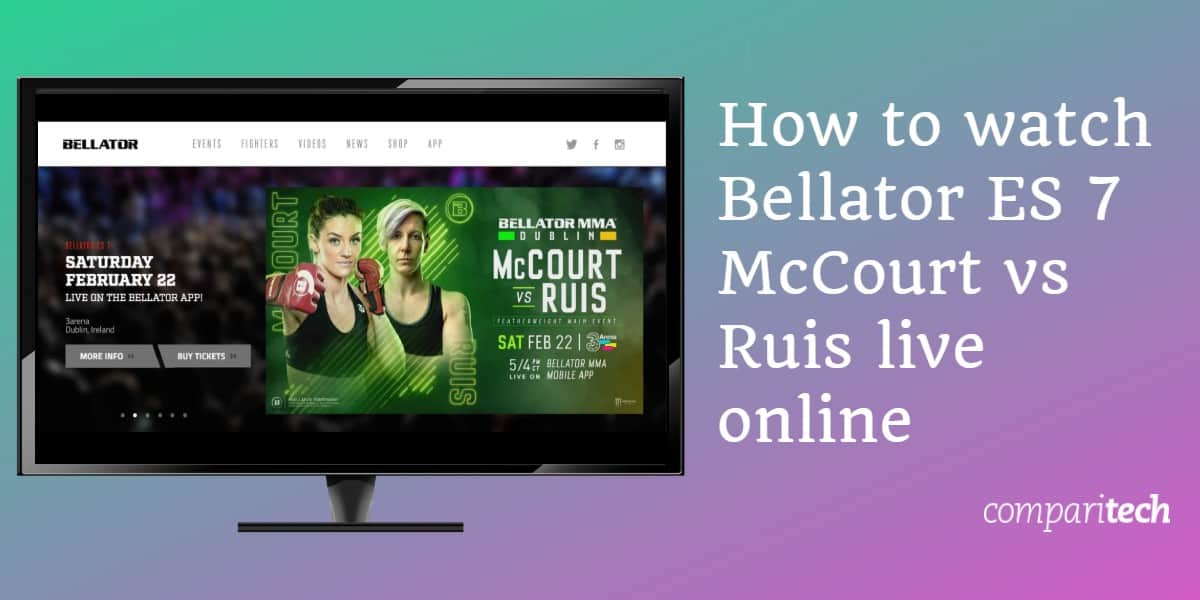 Bellator ES 7 will be rolled into Bellator 240, with both events taking place consecutively at the 3Arena in Dublin, Ireland, on February 22. Although the European Series main card fights will begin at around 5 PM EST, they won’t be broadcast in the US until a few hours later. In total, there will be 21 fights, so MMA fans certainly have a lot to look forward to.

It’s important to recognize that we’re only recommending official sources. While unlicensed streams may be available, these are prone to being taken offline for copyright violation, and are often plagued by laggy, low-resolution video. With several legitimate ways to watch Bellator ES 7 online, there’s really no need to use shady third-party streams.

This event will only be broadcast on region-locked streaming platforms. As such, if you’re traveling abroad and looking to watch on your usual services, you’ll need a VPN.

VPNs enable you to use geo-blocked services from abroad by replacing your IP address with that of a server in another country. This is much simpler than it sounds; juts follow the steps below to watch McCourt vs Ruis as normal while on vacation.

Here’s how to watch Bellator ES 7 (McCourt vs Ruis) live online from anywhere:

Remember that Bellator ES 7 will air live. For this reason, we strongly recommend spending a few minutes running through the steps above ahead of time. This will ensure that you won’t have to miss anything due to unexpected technical problems.

How to watch Bellator ES 7 on US or Canadian TV

This event actually starts at 11:30 AM EST but it won’t be broadcast live. Instead, Paramount Network will broadcast coverage from 3 AM the following day, while DAZN will sneak in a few hours earlier and begin airing Bellator ES 7 at 12:30 AM.

If you live in the US, it’s possible to stream McCourt vs Ruis online via the Paramount Network website. If you get this channel as part of your cable TV package, fuboTV, or AT&T TV Now subscription, just enter your provider details to start watching right away at no added cost.

Looking to watch Bellator without cable or an over-the-top subscription? Paramount Network also offers a 24-hour free pass. Better still, you don’t even have to provide payment information or create an account to take advantage of it.

If you live in Canada or just want to watch Bellator ES 7 as soon as possible, DAZN is your best bet. It costs $19.99 USD (or $20 CAD) per month. DAZN also offers a 30-day free trial in Canada, but unfortunately, this isn’t available to users in the US.

Both of these platforms are geo-restricted, and DAZN has particularly powerful VPN detection features. That said, ExpressVPN was able to access the US version of the site at the time of writing. ExpressVPN comes with a 30-day money-back guarantee which allows you to try it risk-free. If you’re unimpressed, you can just cancel after the fight to receive a full refund.

Where else can I stream Bellator ES 7 live?

Bellator’s European Series won’t just be shown in North America. Read on to find out how you can watch McCourt vs Ruiz wherever you are in the world.

This event will air exclusively on Channel 5 at 10 PM GMT. Here’s the problem: this network’s online streaming service, My5, doesn’t actually let you watch live TV. So, if you’d rather not stay up to watch Bellator ES 7, don’t worry: it’ll be added to the on-demand library shortly after airing.

The good news is that you can stream McCourt vs Ruis live on TVPlayer.com. This platform is completely free to use, but before you can watch anything, you’ll have to create an account. Both My5 and TVPlayer are region-locked, so if you’re traveling outside of the UK, you’ll need a VPN to access them.

Didn’t see your country above? Don’t panic; Bellator actually has a fairly extensive list of international broadcasters. It’s worth noting that not all of these will be showing Bellator ES 7, though; Spike isn’t broadcasting the fight in Australia, for instance. Additionally, not all broadcasters will allow you to stream the event online. It’s best to research your local source ahead of time to avoid disappointment on fight night.