How to watch the NCAA College Football 2021-2022 postseason online 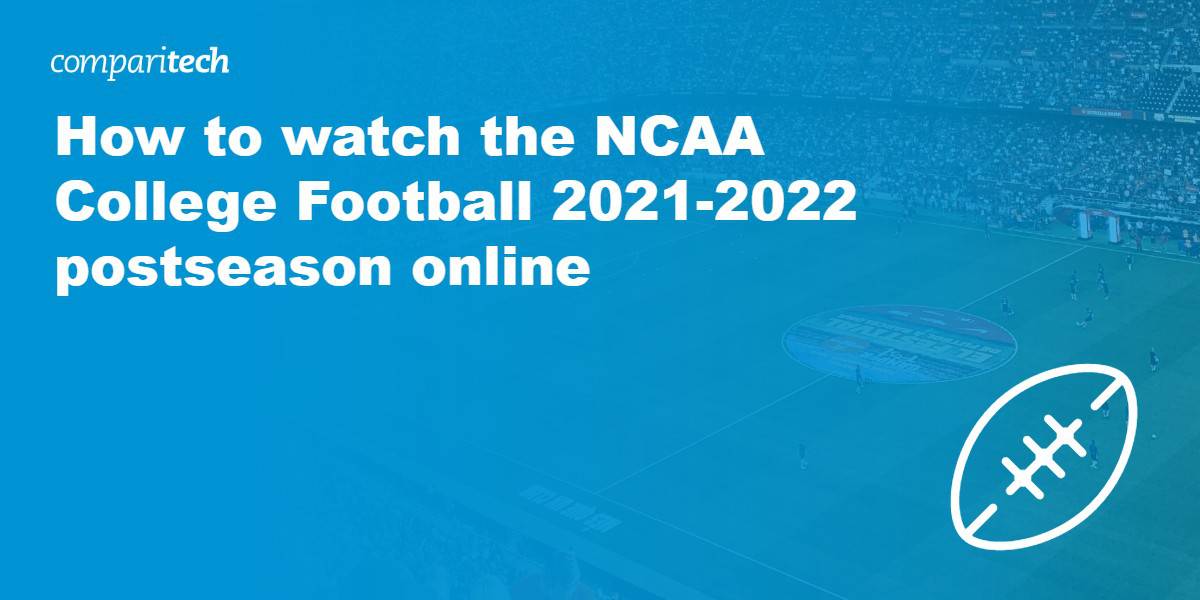 The NCAA College Football 2021-2022 post-season is finally here! Fans can look forward to the Cotton Bowl and Orange Bowl on December 31, four semifinal fixtures on New Year’s Day, and the College Football Playoff National Championship on January 10, 2022. Unfortunately, streaming rights are split across nearly a dozen different services. Not to worry, though: we’ll show you how to live stream most 2021-2022 NCAA College Football postseason games online.

Update: The 2021/22 Cotton Bowl, Orange Bowl, and NCAA Championship will all be available on ESPN. For those making their way outside the US this year, we’ll offer some suggestions on how to watch via your usual services online while traveling abroad (with or without cable).

How to watch NCAA College Football online from anywhere

Here’s how to watch the NCAA College Football live streams using a VPN:

You may find that some services block VPN connections on certain browsers, such as Chrome. In order to get NordVPN or other VPNs to work while using some web browsers, try logging out of the browser, as well as clearing your cache, browsing history, and cookies.

NordVPN is offering a fully-featured risk-free 30-day trial if you sign up at this page. You can use the VPN rated #1 for streaming football with no restrictions for a month. This is perfect for following your favorite team while traveling abroad.

Where to watch NCAA College Football

NCAA College Football is a uniquely American experience. As a result, there are very few streams for games that exist on services outside of the US. However, you will find that some of the broadcast options are free, with your only blockade being geographic content restrictions that can be bypassed through a VPN.

In the US, your best option to watch as many games as possible will be through ESPN, ABC, CBS, CBS Sports Network, Fox Sports, NBC Sports Network, Pac-12 Network, and SEC Network. No one streaming service carries all of those channels (not even traditional cable), but we’ll detail out where you can get them.

In Canada, you can catch a large number of games through Sportsnet Now,  DAZN, TSN, and a few others.

In general, only the US and Canada have major online services where a significant number of broadcasts can be viewed.

As stated, the broadcast rights in the US for NCAA College Football are extremely complex. While the NCAA does not implement many blackouts, many games simply aren’t available outside of their respective regions.

A few major broadcasters will be carrying most games, and you can watch most games throughout the year if you take the time to explore streaming options. Additionally, only a select few broadcasters have rights to the NCAA College Football Championship and Bowl games. Once the playoffs and championships begin, your viewing options will get much easier to handle. Until then, here’s a long list of where to go watch different regional games.

From this list, the primary options you’ll want to access are ESPN, CBS Sports, FOX Sports, SEC Network, Pac-12 Networks, Stadium, and Big 10 Network. No streaming service carries all of these options except traditional cable. Getting them all through traditional cable would be exceptionally expensive, though. That said, the following streaming services will give you the most coverage:

Some of the networks mentioned above will have free streams available online. You can access the following NCAA conferences both live and on-demand for free:

You’ll also be able to catch some games on a few local TV channels over-the-air. A good OTA antenna and receiver should allow you to watch games in your area broadcast on available networks where broadcast agreements exist.

Importantly, these free options can be accessed via a VPN if you’re traveling outside of the US.

You can get Sling TV for as low as $35 per month to get a selection of the above-mentioned networks. If you opt for the Sling Orange + Blue subscription, however, you’ll get 3 ESPN channels (ESPN, ESPN2, ESPN3), FOX Sports 1 and FOX Sports 2, ACC Network, and NBC Sports.

For an extra $11 per month, you can also add an extra sports package to Sling TV that includes SEC Network, SEC Network+, Pac-12 Networks, and ESPN U. Bringing Sling TV’s channel coverage up to 10 separate options, this makes Sling TV the single best option for US NCAA sports fans.

The sports-centric streaming service fuboTV is going to be a great option for anyone that wants some of the smaller conferences. For $64.99 per month, fuboTV provides FOX Sports 1 and 2,  Pac-12 Networks, CBS Sports Network, and Big Ten Network.

Google’s YouTube TV service is one of the better options for anyone looking to catch as many NCAA football games as possible. For $64.99 per month, you’ll get a load of channels that includes Big Ten Network, SEC Network, ESPN, ESPN2,  ESPNU, CBS Sports, Fox Sports 1, and Fox Sports 2.

Hulu with Live TV is an option to consider, as well. Through Hulu with Live TV, you’ll get ESPN, ESPN2, ESPNU, ACC, Fox Sport 1 and 2, Big Ten Network, CBS Sports Network, and SEC Network. The cost comes in at $64.99 per month.

ESPN’s new streaming service was maligned for not carrying a large number of events. However, you can use it to help access some college football games. The cost is just $6.99 per month.

Stick with us here. DAZN US currently only offers fighting sports like MMA and boxing. However, DAZN Canada provides Pac-12 Networks games. From our testing, a VPN like ExpressVPN will let you bypass DAZN’s geographic content blocking and works to get you DAZN Canada streams — including Pac-12 Networks NCAA College Football games. This makes it one of the cheapest options to explore.

Canadians get to enjoy a selection of NCAA College Football games. Those living close enough can pick up some matches using OTA antennas. Outside of that, a few streaming services will be carrying some, but not all, of the many games that span the NCAA conferences.

Your options to watch NCAA College Football in countries outside of the US and Canada are slim. However, a VPN will work to bypass most of the websites and services mentioned above. Especially for US residents, you can even sign up to a DAZN US account, then use a VPN to get Pac-12 through DAZN Canada. Presumably, this option should work for anyone with a DAZN account in other countries as well, such as the UK or Germany.