How to watch Premier League Darts online from anywhere

Ready for the biggest darts championship of the year? We’ll explain how to live stream Premier League darts online, even if you’re traveling abroad at the moment.
Ian Garland Streaming, Kodi and VPN Expert 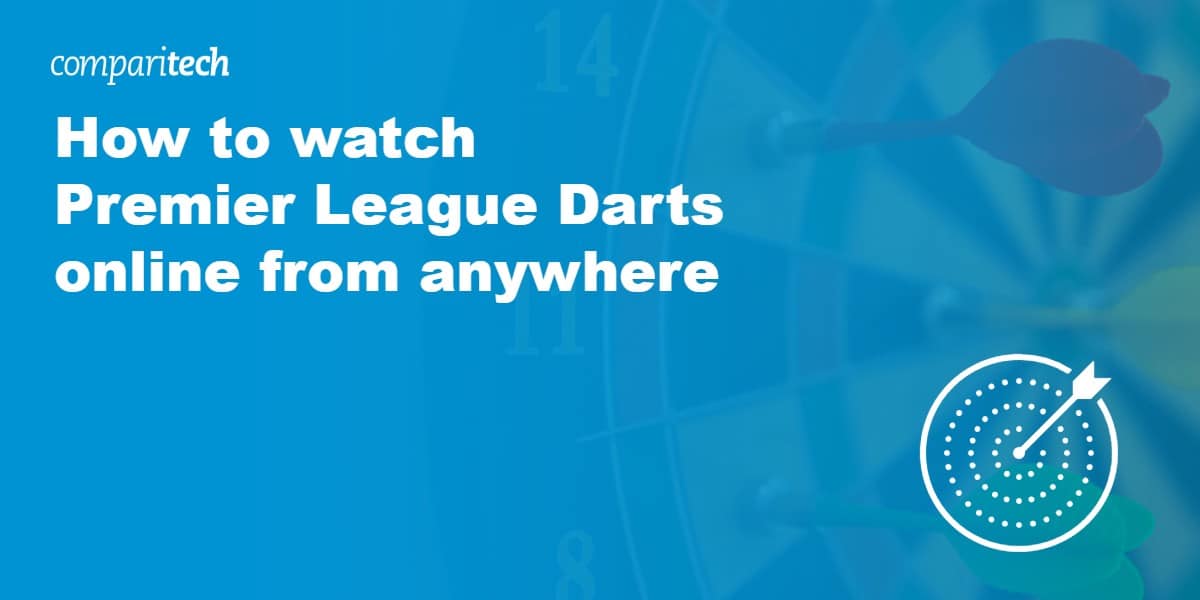 The 2022 darts Premier League officially begins on February 3 and will run until May 26. With 17 exciting nights of action featuring the UK’s best darts players, there’s plenty to look forward to. Better still, you can stream every moment of the action online. Below, we’ll let you know how to watch Premier League darts online from anywhere.

We advise sticking to official sources when streaming sports online. Although third-party streams can seem more convenient, they’re rarely of the same quality and are known for dropping out at the worst possible moment. Besides, there are plenty of ways to watch legitimately without breaking the bank, and we’ll run you through these a little later.

Note that the Premier League will only be shown on region-locked streaming services. This means that if you’re traveling, you’ll likely need a Virtual Private Network (VPN) to watch on your usual channels.

How to stream Premier League Darts online from abroad

VPNs are tools that enhance your online privacy by encrypting your traffic and making it look like you’re somewhere else in the world. However, we can take advantage of this second feature to regain access to our usual services while traveling.

Here’s how to stream Premier League Darts from anywhere:

These events will be broadcast live, so we strongly encourage you to make sure your VPN works as expected ahead of time. This way, there’s no chance of missing the action due to last-minute technical trouble. Remember: all of the VPNs above provide 24/7 support over live chat, making it as easy as possible to get help.

NordVPN offers a fully-featured risk-free 30-day trial if you sign up at this page. You can use the VPN rated #1 for streaming darts with no restrictions for a full month. This is perfect for anyone hoping to catch the sport’s biggest matches while traveling abroad.

How to watch Premier League Darts online on UK TV

Every Premier League darts match will be shown live on Sky TV, specifically Main Event and Arena. If you’re already a subscriber, simply log into the Sky Go app to stream each event at no added cost.

Luckily, it’s also possible to watch Premier League darts without cable. You’ll need a Sky Sports Pass on Now TV, though. These cost £33.99 per month with a one-week free trial. Alternatively, you can sign up for the mobile pass – this lets you stream five channels live (including Arena) on your phone or tablet for just £9.98 per month. Given that only the first night of the Premier League is on Main Event, this is easily the cheapest way to watch live.

Don’t mind waiting a little longer to watch each match? In that case, you could sign up for a monthly PDC account. This allows you to stream the entire tournament on-demand, and only costs £4.99 per month or £49.99 per year.

The services above are all geo-blocked. You can, however, connect to a British VPN server to access them while traveling. NordVPN comes with a 30-day money-back guarantee that lets you try it out completely risk-free. If you’re not impressed, just cancel for a no-questions-asked refund.

Where else can I watch Premier League Darts online?

The good news is that this event will be broadcast just about everywhere in the world, including the US, Canada, Australia, Germany, and France. As long as you’re not in the UK or the Netherlands, you can stream every fixture live with a PDC subscription. These cost £9.99 (USD $13.39) per month or £59.99 (USD $80.42) annually, and unfortunately, there’s no free trial.

Remember: if you’re traveling in the UK or the Netherlands, you can connect to a VPN server in your home country to regain access to your usual content abroad.

What are the changes to the Premier League format?

The first (and easiest to explain) change is the prize money. This year, it’s increased to a cool million pounds.

So what else is new? Well, in previous years, this tournament has followed a standard round-robin format. However, things are significantly different this year. Instead, the eight players will take part in a full knockout competition every single night. Winning the night earns players five points and a £10,000 bonus, while coming second grants three points, and finishing in the semi-finals earns two. After all 17 nights of the contest have been played, the player with the most points wins overall.