How to watch Britain’s Got Talent (Series 14) online abroad 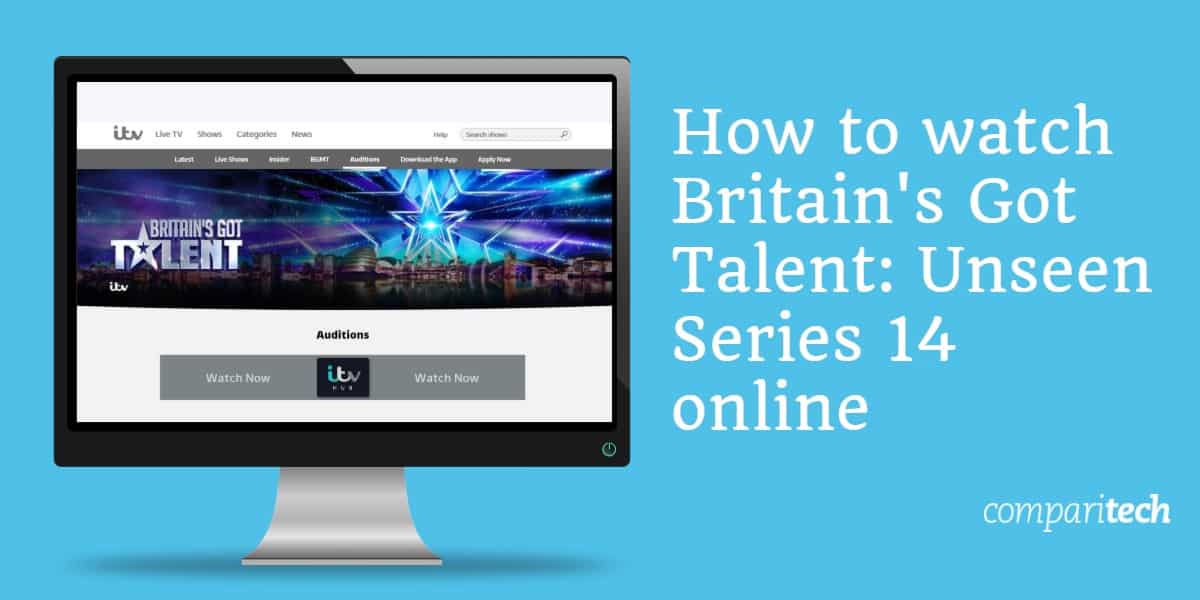 The second half of Britain’s Got Talent season 14 will begin Sunday, September 6 at 6:30 PM BST (10:30 AM PST / 1:30 PM EST). There’ll be one episode a week at first, but in the past, this has increased as the competitions draws to a close. Below, we’ll explain how you can live stream Britain’s Got Talent from anywhere in the world.

It’s important to note that we’ll only be recommending official sources. Britain’s Got Talent is a hugely popular show, and as such, will likely be available on unlicensed streaming sites. But there’s really no benefit to using these as they often offer very low-quality video, and there’s always a chance that your stream will be taken offline partway through. You can watch Britain’s Got Talent season 14 for free anyway, so there’s no need to resort to unreliable, unauthorized streams.

You’ll need a VPN to watch Britain’s Got Talent on your usual services if you’re traveling outside of the UK.

How to watch Britain’s Got Talent abroad with a VPN

It’s actually quite simple to access region-locked platforms from abroad with a VPN. Just follow the steps below to unblock and stream Britain’s Got Talent from anywhere.

Here’s how to watch Britain’s Got Talent online from anywhere:

Britain’s Got Talent season 14 will be broadcast live. For this reason, we strongly recommend testing your VPN with the steps above well before the show begins. By doing so, you leave yourself plenty of time to contact customer support if anything doesn’t work as expected. This also means that you’re less likely to miss the beginning of an episode.

ITV will be showing season 14 of Britain’s Got Talent live. This means that you can watch it completely free of charge on ITV Hub and TVPlayer.com. Whichever service you decide to use, you’ll have to create an account first, however. During registration, you’ll be asked to provide a UK postal code, but don’t worry, as this isn’t used to verify your location. You can simply enter any British postal code, verify your email address, and start streaming immediately.

One of the great things about ITV Hub is that it makes new episodes available on-demand shortly after they finish airing. As such, if you miss an episode or have plans when Britain’s Got Talent is on, you can easily catch up. You should note that these episodes are only available for a short time, though.

British law requires you to have a TV license if you watch anything online at the same time as it’s showing on TV. This is often accidentally overlooked as neither ITV Hub nor TVPlayer.com consistently tells the user this. Further, neither service actually checks whether you have a license or not, instead relying entirely on an honor system.

Both of the streaming services above are region-locked and only available in the UK. You can still access them from abroad by connecting to a British VPN server. Don’t have a VPN? ExpressVPN offers a 30-day money-back guarantee so you can use it to stream Britain’s Got Talent risk-free.

Where can I watch international versions of Britain’s Got Talent?

Britain’s Got Talent will only be shown in the UK, but several international spinoffs are due to begin airing shortly across the world. Take a look below to find out where you can watch your country’s version:

America’s Got Talent season 15 is currently airing. Just like with previous seasons, it’s showing at 5 PM PST / 8 PM EST on NBC. If your cable package includes NBC, you can log in and start watching immediately, but if not, you can still catch the latest episodes on-demand a few hours after they end.

If you’d prefer to watch season 15 live, you could also sign up for fuboTV, Hulu with Live TV, Sling TV, or YouTube TV. These services range from $25–50 USD per month, but each includes a free trial period so you can see if they’re right for you. Most of these platforms require you to have a payment method linked to a US address, so while it’s difficult for foreign users to sign up, American residents who are currently in other countries can register as normal.

The above services are only available in the USA. This means that you’ll have to connect to one of your VPN’s American servers to access them from other countries.

There are dozens of international Britain’s Got Talent spinoffs, so many in fact that it can be hard to keep track of them all. Luckily, there’s a full list of regional Got Talent versions on Wikipedia — this will allow you to see not only when new seasons will air in your country, but also which channels they’ll be on.

Can I watch previous seasons of Britain’s Got Talent online?

Unfortunately, you can’t watch most older seasons of Britain’s Got Talent online. No major streaming service carries seasons 1-13, and you can’t even purchase these individually on the Google Play Store or iTunes, making it almost impossible to stream them legitimately.

How does Britain’s Got Talent work?

This show follows a fairly standard talent-show style format. Initially, performers audition in front of a panel of four judges. If a majority of judges like the act, the contestant progresses to the next stage. If not, they’re eliminated from the competition. Additionally, each judge has a golden buzzer which allows them to instantly put the performer in question through to the semi-finals, but this can only be used once per season.

Next up is are the live semi-finals. Viewers vote on which act they think was best overall, and the judges choose between the contestants in second and third place. The two chosen performers are then accepted into the finals, where the viewers decide once and for all who wins.

While Simon Cowell was a judge on the first half of the season, he’s had to be replaced following a serious back injury. Now, Amanda Holden, Alesha Dixon, and David Walliams will be joined by Ashley Banjo, part of Diversity, a dance group who won Britain’s Got Talent back in 2009.