How to watch Modern Family Season 11 online from anywhere

Looking to watch Modern Family season 11 online? Read on to find out how to live stream Modern Family from abroad (outside of the US), with a Virtual Private Network (VPN).
Ian Garland Streaming, Kodi and VPN Expert 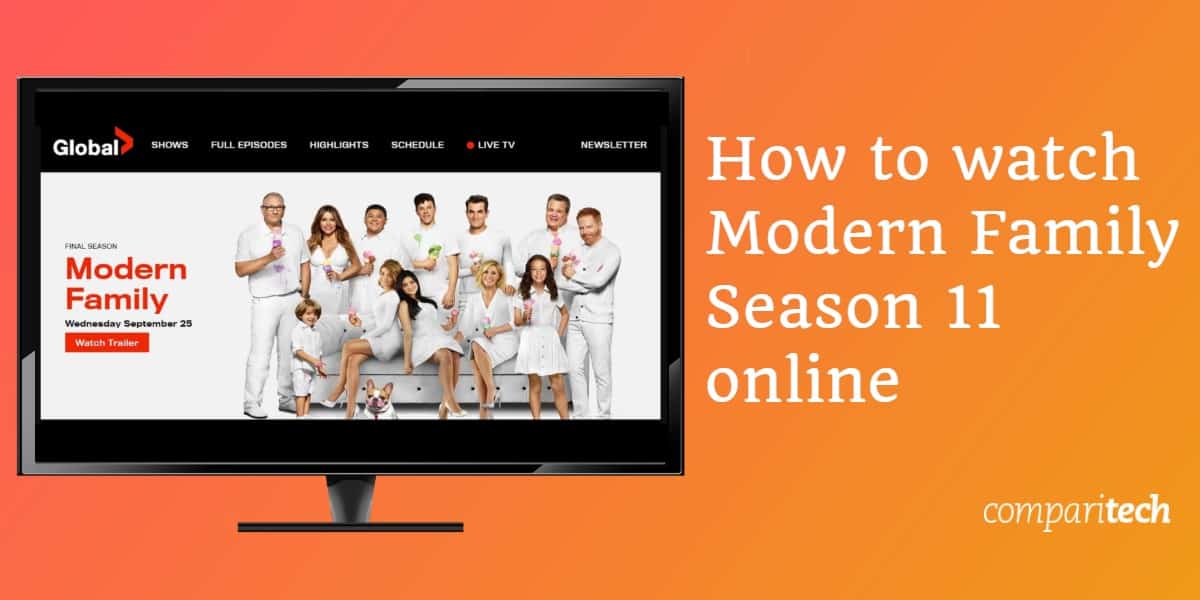 The Modern Family season 11 is set to premiere at 9 PM EST (6 PM PST) on September 25. It has been hinted that there’ll be 18 episodes in total, slightly fewer than previous seasons, and as ever, new episodes will air on ABC. Don’t worry if that channel isn’t available in your country; below, we’ll explain how to live stream the new series of Modern Family from anywhere.

You should note that we’ll only be recommending official sources. Given this show’s popularity, unauthorized streams are almost inevitable, but we advise against using them. Even putting aside the laggy, low-resolution video, third-party streams are frequently taken down for copyright violation. Luckily, there are several legitimate ways to watch the new season of Modern Family online, so there’s no need to resort to shady, unlicensed streams.

Modern Family will only be shown on region-locked streaming services. As a result, you’ll need a VPN to watch from abroad.

It’s actually quite simple to unblock geo-restricted services abroad. Connecting to a Virtual Private Network (VPN) tunnels your traffic via an intermediary server in a location of your choice. It switches your IP address to make it appear that you’re in your chosen location, enabling you to bypass geo-restrictions. Follow the steps below to watch Modern Family season 11 from anywhere.

Here’s how to watch Modern Family season 11 online from anywhere:

New episodes of Modern Family will air live, so it’s important to make sure your VPN works properly ahead of time. This way, if you encounter any issues, you’ll have plenty of time to get help from your VPN’s customer support team.

Modern Family has fans all over the world, so it’s only natural that its final season would be broadcast in multiple regions. Take a look below to see which networks are showing Modern Family where you live:

American fans can stream the new season of Modern Family live on ABC. If your cable TV package already includes this channel, you can simply sign in to the ABC website and start watching at no added cost. It’s also possible to watch Modern Family season 11 live without cable, although you’ll need a Hulu, PlayStation Vue, or YouTube TV account.

One week after new episodes air, they become freely accessible, even if you don’t have a cable subscription or any of the above services. As such, if you don’t mind being a week behind, it’s possible to stream Modern Family season 11 online for free.

ABC is only available in the US and this service has exceptionally strict geo-restriction features. This means that most VPNs simply won’t let you watch from abroad. However, we can confirm that at the time of writing, ExpressVPN and PrivateVPN can unblock ABC. This service comes with a risk-free 30-day money-back guarantee meaning you can try it out and claim a full refund if unsatisfied.

Global will broadcast Modern Family season 11 across Canada. This service allows you to log in and stream live TV at no added cost if you have a cable TV subscription, but unfortunately, doesn’t offer any kind of online-only pass.

Similar to ABC, Global allows you to watch full episodes without signing in if you’re prepared to wait a week. However, new episodes of Modern Family will only be available on-demand for seven days and there are no details on how you’ll be able to watch after they’re removed from Global’s library. For this reason, it’s best to catch up as soon as possible if you’re watching on-demand.

Global is region-locked, which means you’ll have to be in Canada or connected to one of your VPN’s Canadian servers to access it.

Good news for Indian Modern Family fans: the first episode of season 11 will be added to Hotstar on September 26, just one day after it airs in the US. As this is a Star World show, though, you’ll need a Hotstar Premium subscription. These cost ₹299 per month or ₹999 per year.

Hotstar is geo-restricted and will only include Modern Family as part of its Indian library. Further, this service actively blocks most VPNs. At the time of writing, it was possible to watch Hotstar from abroad using Surfshark.

At the moment, there is no UK release date for Modern Family season 11. However, if history is anything to go by, British fans could be in for a significant wait; season 10, for instance, only reached the UK five months after it premiered.

When season 11 does arrive, it’ll almost certainly be broadcast on Sky One like every season before it. If you’re already a Sky TV subscriber, you can log in to the Sky Go app and start watching immediately. Otherwise, your best bet is to sign up for Now TV: this allows you to stream Sky One (and several other channels) live for £7.99 per month.

Sky Go and Now TV are only available in the UK. However, you can access them as normal from abroad by connecting to a British VPN server.

What can we expect from season 11 of Modern Family?

Details are still scarce as to the actual plot of season 11, although we do know that this will be the final series. Additionally, it has been confirmed that at least part of it will revolve around Haley and how she adjusts to life with twins.

Other than that, all we know is that most (if not all) of the main cast will return for at least a cameo sometime during the upcoming series. Simply put, fans will just have to wait and see what happens.