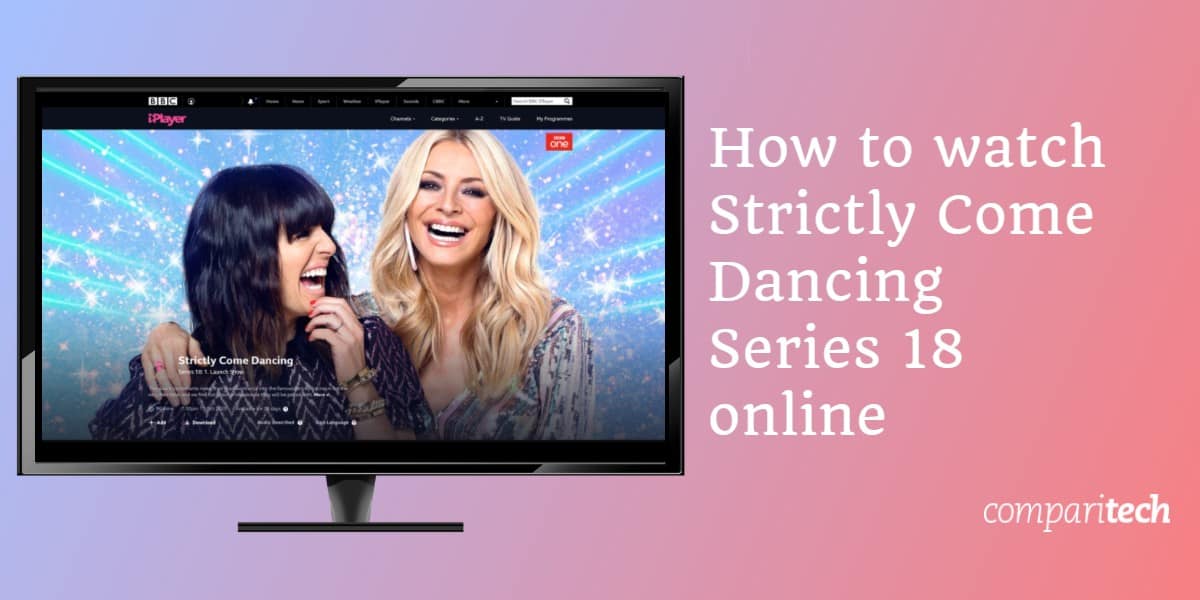 Strictly Come Dancing’s 18th series began on October 17 and will air at 7:25 PM BST every Saturday and Sunday for nine weeks afterward. While some things have changed this year due to the pandemic, there’s a lot that’ll remain the same too. Below, we’ll explain how you can catch every moment of the action live, from wherever you are in the world.

This post will only be recommending official sources. Popular TV shows almost always have unlicensed streams, but these come with several disadvantages. Firstly, they’re usually low-resolution, and second, they run the risk of being taken down partway through for copyright violation. Since Strictly Come Dancing can be watched completely free, there’s nothing to gain by using unofficial streams.

Trying to find out how to watch Strictly Come Dancing in the USA, Canada or anywhere else outside the UK? You’ll be happy to know you can watch Strictly while abroad but you’ll need the help of a VPN to access your streaming services back home.

How to watch Strictly Come Dancing abroad with a VPN

New to VPNs and not sure how to get started? Don’t worry, unblocking geo-restricted services from abroad is very straightforward.

Here’s how to watch Strictly Come Dancing online from anywhere:

To ensure you don’t miss anything, we recommend performing the steps above before Strictly Come Dancing airs. This way, if your VPN doesn’t work as expected, you’ll have plenty of time to contact customer support for help. BBC iPlayer has particularly advanced geo-restriction features, but even if it updates and blocks your VPN, support should be able to direct you to a working server.

Strictly Come Dancing airs on BBC One in the UK. The good news is that you can watch new episodes for free on BBC iPlayer. Bear in mind these are only available for three months, you won’t be able to stream previous seasons.

It’s also worth noting that UK law requires you to have a TV License in order to watch Strictly Come Dancing via BBC iPlayer. This is easy to accidentally overlook, though, as the platform only displays this information in a popup and doesn’t have any verification in place to check that the user is actually allowed to watch. During registration, you’ll also be asked to enter a UK postcode, but this isn’t used to check your location.

While older seasons of Strictly Come Dancing aren’t included in any major streaming service, you can still watch some of them online if you’re willing to pay. Amazon, Microsoft, and iTunes currently offer the last few seasons for £12.99 each, and select episodes from season one are available on the Google Play Store. There is currently no way to stream seasons 2-13 online.

Remember: BBC iPlayer is geo-blocked and only available in the UK, so you’ll need a VPN to access it abroad. Don’t worry if you haven’t got one yet: ExpressVPN comes with a 30-day money-back guarantee, which means you can try it risk-free and simply claim a refund if it fails to impress.

How to watch your country’s version of Strictly Come Dancing

The success of Strictly Come Dancing led to numerous regional spin-offs. Below, we’ll explain how you can watch your country’s version:

More than 40 countries have (or have had) their own version of Strictly Come Dancing. There are far too many to cover individually here, but if your country isn’t listed, you might find it in the list of international Strictly Come Dancing variants. This list also tells you where you can watch and if the show is still running or not.

Can I stream Strictly Come Dancing with a free VPN?

Free VPNs can seem appealing at first glance, but in reality, they have significant flaws. First and foremost, they’re unsuitable for streaming live HD video. These services often struggle to accommodate vast numbers of users, so you can expect long loading times and choppy playback, if the video starts at all. Additionally, the BBC’s geo-restriction measures are especially advanced, with most free VPNs incapable of unblocking BBC iPlayer at all.

You might ask yourself how a free service can afford to maintain its network. Many free VPNs generate income via ads, but you make the company money whether you click them or not. By storing tracking cookies on your system, these services can harvest a wealth of data about you, which can then be sold to the highest bidder. This is exactly the opposite of what a VPN is intended for, and by sharing your information, free VPNs actually undermine your attempts to remain anonymous online.

Unfortunately, there’s no easy way to tell if you’re using a legitimate VPN or just a Trojan. In 2015, a study showed that of 283 free VPN apps for Android, almost 40% included malware, and 18% didn’t encrypt any user traffic whatsoever. This is a relatively small sample size, so we can reasonably assume there are many more dangerous apps out there. Even well-known free VPNs have been known to act shady, with one in particular caught selling its users’ idle bandwidth to help run a botnet.

The best way to protect yourself online is to use one of the best VPN services that always put user privacy first.

Who are the Strictly Come Dancing season 18 cast?

As ever, this year’s Strictly Come Dancing pairs celebrities with professional dancers to see which couple can impress the judges (and general public) most consistently. Take a look below to find out exactly who’s taking part in season 18.