Kaspersky vs Webroot: Which is best?

Trying to decide between Kaspersky and Webroot? This comparison looks at the pros and cons of these two leading antiviruses and explains which might be best for you.
Steve Adams 15+ years experience in the tech, privacy and security space 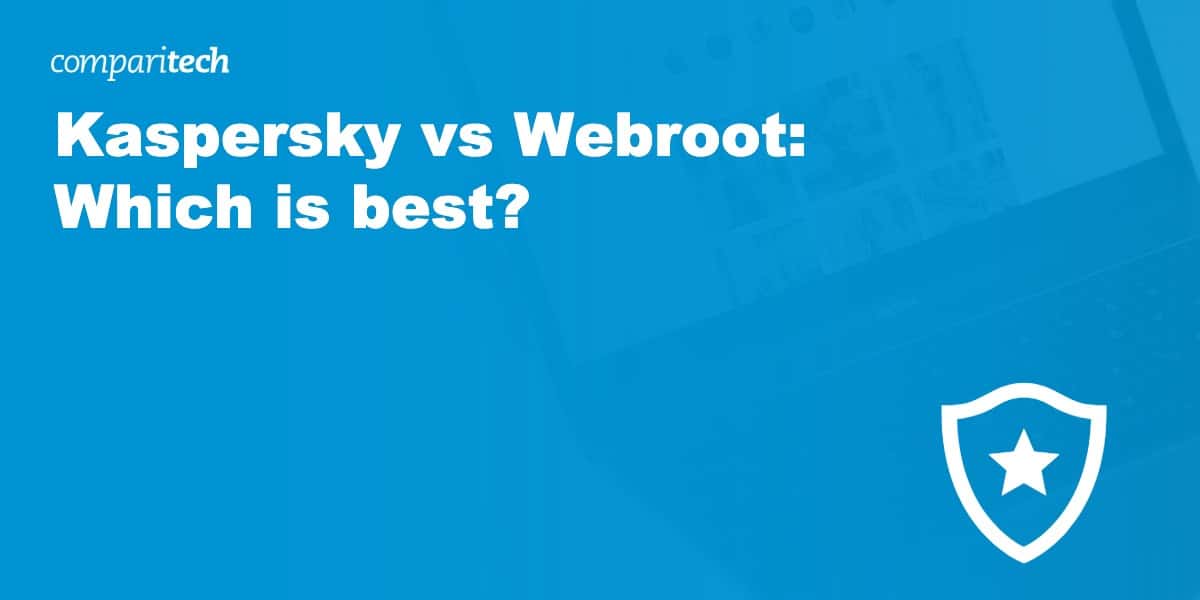 To help you decide which is best, I performed my own malware protection tests that gauge how well each antivirus software blocks common threats. To verify my findings, I took a look at tests conducted by leading antivirus testing websites. I also looked at pricing, performance, and other perks to see which antivirus comes out on top.

Kaspersky and Webroot take different approaches. Kaspersky uses a traditional style of antivirus software protection, whereas Webroot uses a cloud-based solution. The latter method can speed up scanning and provide greater efficiency for your device.

Don’t have time to read the full comparison? I’ll give you the quick version here. Webroot is my winner. It has outstanding security features and recorded some outstanding system performance results. Webroot’s product isn’t just an antivirus scanner; it’s a whole package to keep you safe online.

Read on for the full in-depth analysis.

BEST DEAL FOR KASPERSKY:Save 70% on all Kaspersky packages and protect up to 10 devices at the same time.

BEST DEAL FOR WEBROOT:Save 40% on Webroot Antivirus and VPN for the highest levels of protection for your device and internet connection.

In 2019, Webroot and its parent company Carbonite were acquired by OpenText, a global leader in Enterprise Information Management. Webroot secures businesses and individuals worldwide with threat intelligence and protection for endpoints and networks. It’s a market leader in cyber resilience for businesses of any size and offers a range of home antivirus products.

Kaspersky is well-recognized in the antivirus world, protecting more than 400 million users. It was founded in Russia in 1997 and has since helped to fight a range of sophisticated threats. Despite its impressive portfolio, many people are wary of the company itself due to alleged links with the Russian government.

Not all antivirus software is low-cost, and some of the highest tier packages from providers like Norton can set you back hundreds of dollars per month. 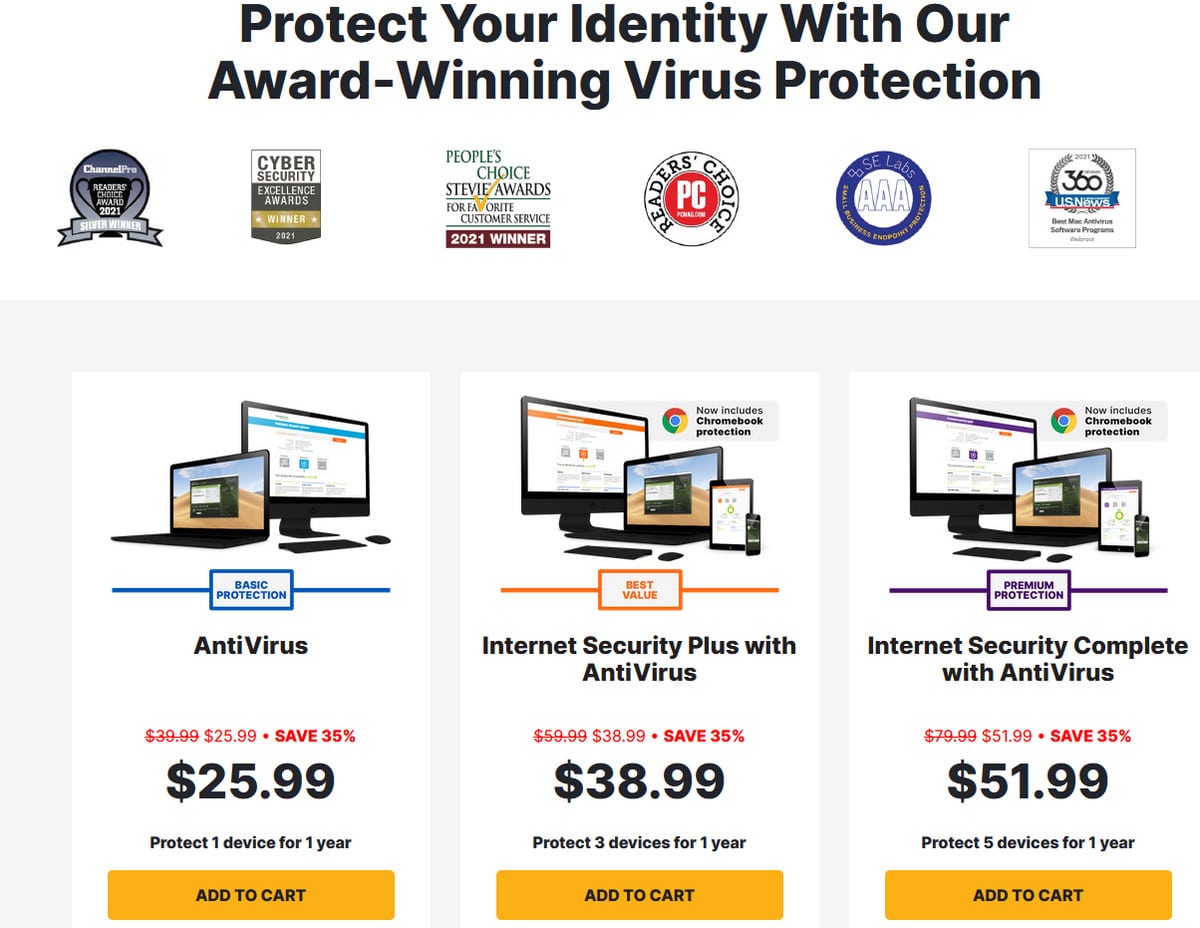 I’ll weigh up the affordability of the package and what you get for your money, including the protection it offers you. The table below highlights the products and packages offered by Kaspersky and Webroot.

Kaspersky offers a free version (Security Cloud), which protects against the most basic threats. If you want more than just the basic level of protection, you can get additional features at an extra cost. The Total Security package costs $89.99 per year and will protect up to five devices.

Webroot only offers three packages to its users, providing less flexibility than Kaspersky. Webroot Security Complete is the most expensive package, coming in at $79.99 (GBP £57.97) per year, which is lower than the price of Kaspersky’s top-tier product.

With the discounts applied, Kaspersky’s top package comes in at almost half of Webroot’s plan for the first year.

What if you’re not satisfied with the product after installing it? Kaspersky will give you your money back within 30 days from purchase. Webroot offers a 70-day money-back guarantee giving you the option to test out the software for longer.

If you’re looking at protecting more than just a Windows PC, both work with all the major operating systems which include Windows, Mac, and Android devices.

Kaspersky successfully identified and blocked all EICAR samples. It then detected all three live samples, immediately deleting them after they were unzipped. Webroot managed to block all live samples automatically, but it allowed all of the EICAR samples in real time. It’s clear that Kaspersky is the winner here. 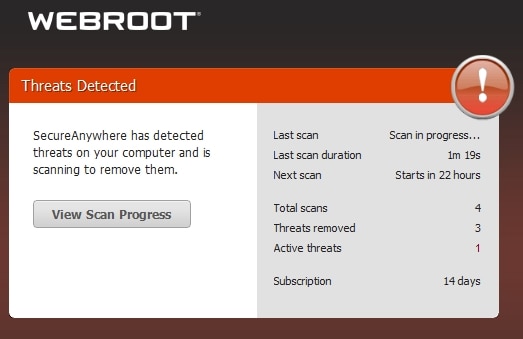 Now for some independent tests. AV-Test does real-world testing and looks at protection against zero-day malware threats. During the most recent tests in May and June 2020, Kaspersky recorded a perfect 100 percent protection score in both months. Webroot was not included in this test, so I could not compare the results.

AV-Comparatives conducts reliable independent antivirus tests. I started with the most recent real-world protection test from February to May 2020. The results show Kaspersky earned a very impressive 99.9 percent protection rate. Again, Webroot was not included in these tests.

AV-Comparatives also undertakes a false alarm test, which records if anything is incorrectly flagged as a threat. Kaspersky had no false alarms, registering yet another impressive result.

As Webroot was not included in any of the online tests from leading websites, I can’t compare results.

PC performance is often overlooked when deciding which antivirus software to buy, but it’s essential to do your research to make sure that a particular software doesn’t slow your device down. I did some tests by running full and quick scans with both software. The data collected during the scans is cited in the table below.

As shown, Kaspersky took more time to perform a full scan at 227 minutes, compared with Webroot’s 72 minutes. Remarkably, Webroot took just one second to complete a quick scan. This is impressive, but not that surprising. Webroot’s goal is to be the leader in speed when detecting threats, and quick scans only look at the areas of a device where malware is most commonly found.

To summarize, Webroot uses fewer system resources when the programs are not running a scan (as seen in the control numbers in the tables above).

During scans, the numbers are much closer and there’s not much to choose between the two programs’ performance. Both are very fast and allow me to run tasks while a scan is in progress.

From my own tests, it’s clear that Webroot is more efficient in the quick-scan setting. Kaspersky’s full scan was more thorough, scanning 2,100,000 items compared to only 11,938 in Webroot’s full scan mode.

AV-Comparatives’ performance test has some useful data that allows me to further analyze speed and PC impact. The test shows how an antivirus impacts PC performance during eight common tasks:

Each task is given a rating between very fast and slow. The latest test from April 2020 gives Kaspersky a very fast rating for all of the above common tasks, confirming my own findings. Webroot is not included in the recent lab tests, so it’s harder to fully compare both programs here. Based on my own results, it’s too close to call and both perform equally well.

While the antivirus scanner itself is important, additional features should factor into your decision too. With most of us using the internet for online payments and other activities involving sensitive information, any extra security is welcomed. Below, I’ve highlighted what you can expect from each product and picked out a few of my favorite features.

Weighing up these features, Webroot offers a couple of interesting tools, including LastPass and the handy 25GB of online cloud storage. Kaspersky contains lots of important features to help you stay safe, no matter what you’re using your device for. Kaspersky has the edge here as it offers more features that everyday PC users can benefit from.

Signup and installation are simple for both Webroot and Kaspersky. Webroot lays out all of the information on one webpage, where you can add your bank and customer information easily. It also shows you your discount and gives you the option to amend how many devices you want to protect. The only thing I don’t like is that it automatically adds a software CD at a charge of $9.99 (GBP £7.23). If you do not want this, click the x button to remove the item.

Kaspersky’s signup page shows your discount and allows you to upgrade to more devices and add expert installation. This is a preferred method for offering extras compared to Webroot’s as it’s not automatically added to your basket. The auto-renewal is toggled on by default, so if you’re not planning to renew, then turn it off to avoid a surprise in a year’s time.

The useability of the software is important, especially with the number of additional features each antivirus comes with. I have included screenshots of the main dashboard that you’ll be greeted with when opening up the software. 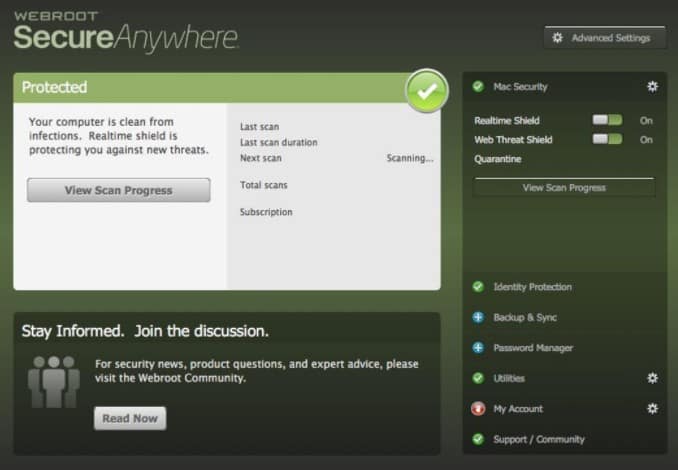 Webroot’s design is simple, with a green colorway that looks a bit dated compared to other modern interfaces out there. The main screen shows the protection status of your device, when your last scan was performed, and when the next one is due. On the right-hand side, you’ll find additional features including backup and a password manager. This makes navigation to different tools fairly easy, although the links to these important features could be given more prominence. 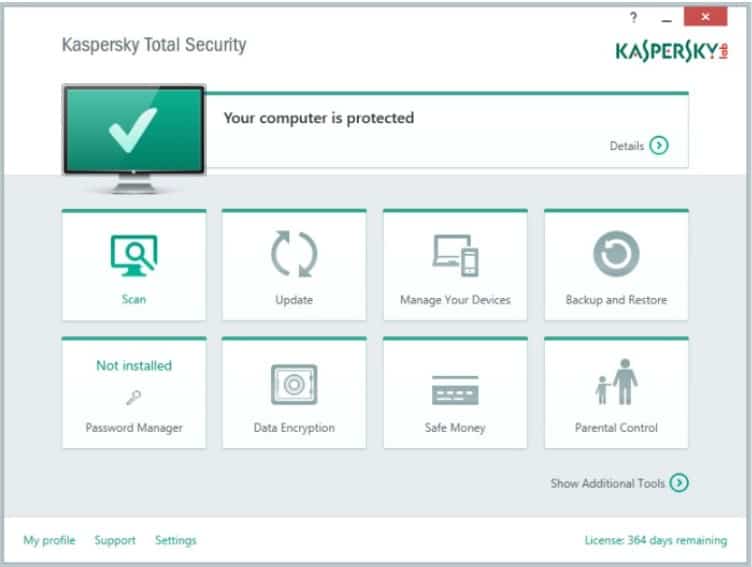 Kaspersky’s design is clean and minimalistic. Each additional feature comes with an associated thumbnail, providing a visual idea of what each does. You can easily navigate to the features and see how long you have left on your subscription.

If you can’t solve a problem, it’s important to have dedicated support to guide you. Webroot has an FAQ section and ticketing system on its website, or you can contact support through phone or the company’s social feeds. 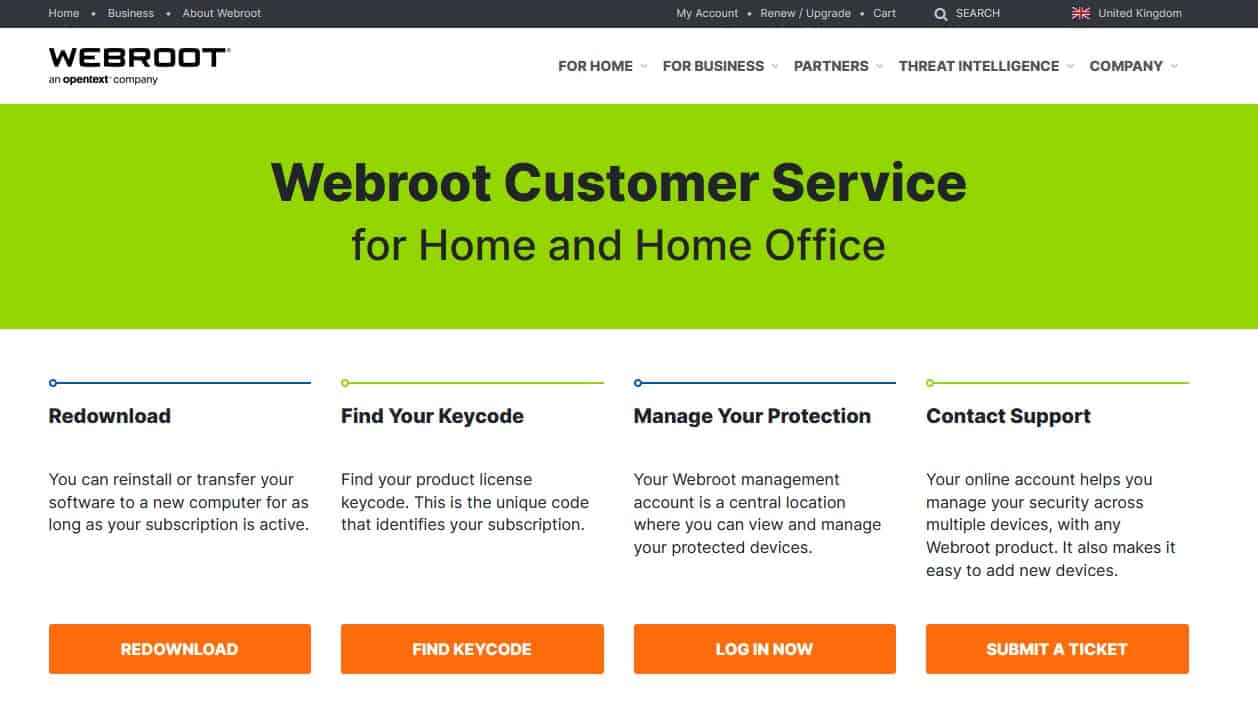 Kaspersky has a great support hub with videos and other useful information that will hopefully answer your query. Alternatively, you can call between the hours of 7am and 1am, seven days a week, or reach a representative via email or online chat.

If you missed the big reveal at the start of this article, let’s recap; Webroot is my chosen winner for antivirus vs. Kaspersky. Webroot has the lowest impact on PC resources I’ve ever seen, making it stand out right away – no one wants antivirus software that introduces unnecessary system lag. Webroot’s rapid quick scan technology is an interesting and valuable feature, alongside its performance optimization options to speed up your device and secure data encryption to protect your files from unauthorized access.

Webroot doesn’t overcomplicate its security packages, with attractive prices for new subscribers. Its user interface is basic but effective, and customer support options are plentiful for most users.