Watering hole attacks explained and how to prevent them 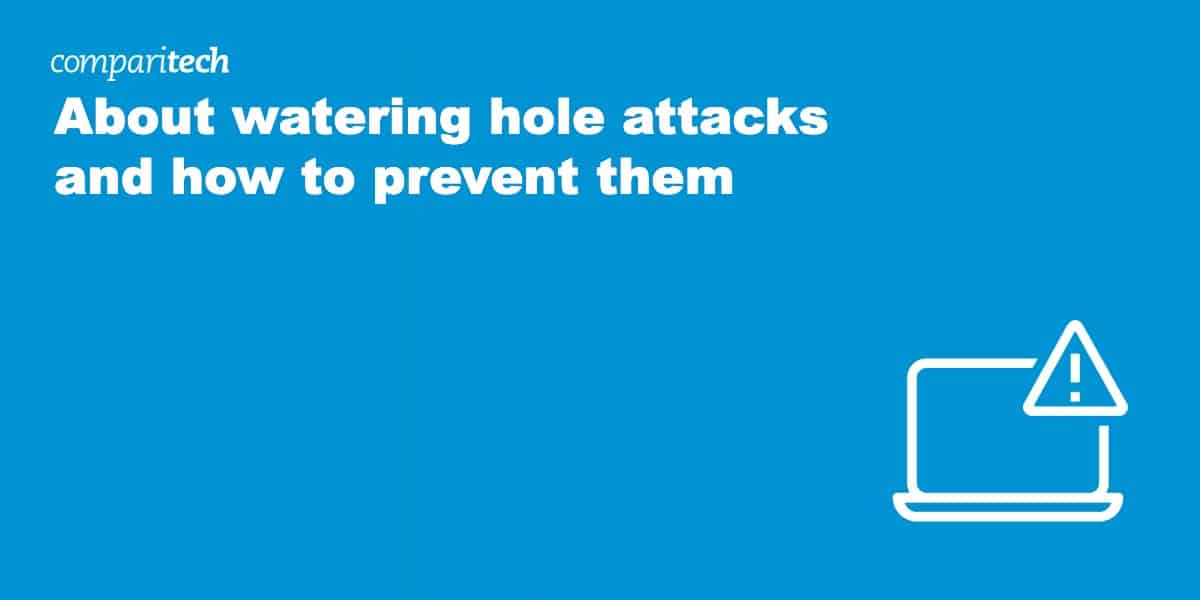 A lot of online attacks have cool technical names, like SQL injection or cross-site scripting attacks. The online attack we’re talking about today doesn’t. It’s called a watering hole attack, but it’s more of an attack strategy than a specific exploit. And while it doesn’t have a cool name, it still leads to a pretty sophisticated attack that can do a lot of damage. This article will look at what watering hole attacks are, how they work, and what you can do to prevent them.

What is a watering hole attack?

Watering hole attacks are similar to spear phishing attacks. They seek to achieve the same goal: persuading an unsuspecting victim to perform an action that will compromise their sensitive information. In a spear phishing attack, this would typically mean sending the victim a targeted email or instant message, prompting them to open an attachment or click on a link in order to compromise their information. In a watering hole attack scenario, there’s no need to lure the victim into compromising themselves.

A watering hole attack is a targeted online attack strategy. The attacker targets an organization and either guesses or observes which websites members of the organization frequently visit. The attacker then infects one or more of these sites with some form of malware, typically via a zero-day vulnerability. Sooner or later, an organization member’s device will become infected, at which point the attacker may gain access to their device and potentially to the organization’s network. As is the case with many, if not most, online attacks, the goal here is to steal personal information, banking details, and intellectual property and gain access to sensitive corporate systems and assets.

Sometimes, however, the attacker will combine both strategies (spear phishing and watering hole attack) to up their odds of success.

The name ‘watering hole attack’ is derived from a predation strategy used by many animals in the wild. The strategy consists in stalking its prey as it drinks from a watering hole, waiting for the opportune moment to attack.

What are zero-day exploits?

A zero-day exploit is a method used by an attacker to exploit the vulnerability and compromise the system. Zero-day exploits are quite severe and have a high success rate because the software vendor will not be aware of them, nor will the public.

You remember the infamous Sony hack, right? It was due to a zero-day vulnerability.

In late 2014, Sony Pictures fell victim to a zero-day vulnerability found on its website. While not much is known about the actual exploit used, The New York Times reports that the hackers used a spear phishing attack that embedded malicious code inside company emails. Clicking the link triggered the attack, exploiting the zero-day vulnerability in Sony’s website.

The attack managed to take down Sony’s network and access extremely sensitive information the company was holding, such as upcoming movie titles and details, the organization’s business plans, and emails and the email addresses of senior Sony executives. Much of the breached information was disseminated over the internet.

How do watering hole attacks work?

In some watering hole attacks, the victim’s device is infected with malware without them even realizing it. This is known as a drive-by attack. If the victim has a high level of trust in the site they’re visiting (or believe they’re visiting), they may well be comfortable downloading files from that website. But they might unwittingly download a Remote Access Trojan (RAT), which would give the attacker remote access to their device.

In 2013, attackers were able to successfully compromise Facebook, Twitter, Microsoft, and Apple’s systems. This was part of an extensive watering hole operation that compromised websites that the employees of the above companies frequently visited. One of the exploited websites in this operation was iPhoneDevSDK.com. Visitors to the compromised websites were served with drive-by downloads of exploits for a zero-day vulnerability found in the Java browser plug-in that ran on both Windows and macOS.

From 2017 to 2018, a Chinese hacker group called LuckyMouse was behind a bold cyber espionage campaign. The campaign targeted a large national data center in central Asia with watering hole attacks to try and gain access to sensitive government information and assets. Members of LuckyMouse successfully injected malicious Javascript code into official government websites that the data center employees frequently consulted. That resulted in the victims being infected with a Remote Access Trojan, providing the attackers with remote access to the compromised systems.

In 2016, the International Civil Aviation Organization (ICAO), an organization with ties to and in frequent contact with the United Nations – the target of this attack – to define civil aviation standards and regulations, fell victim to a watering hole attack. This attack was also attributed to the LuckyMouse hacker group. This time, the group was able to compromise two ICAO servers and the domain administrator and the systems administrator accounts. At least one of the UN’s member states’ websites, Turkey, was compromised after the ICAO cyber-attack – within 30 minutes.

In 2017, hackers managed to insert malicious code in the yet unreleased update of CCleaner, unbeknownst to its software developers as they were coding the new version of the program. Because of this, the code was nonetheless signed by Piriform’s (CCleaner’s parent company) digital certificate, certifying that the update was from a legitimate CCleaner software developer. When unsuspecting users updated their software, they downloaded the malware-laden version and unwittingly compromised their devices. CCleaner is a tool used to clean unwanted “junk” files from Windows and macOS computers. Piriform estimates the number of affected users at 2.27 million.

In 2019, the Holy Water Campaign was deployed, a broad watering hole attack targeting Asian religious and charity groups. When victims visited one of the compromised websites, they were prompted to update the Adobe Flash Player on their device. As you may have guessed, initiating the download triggered the attack, leaving the victim with an infected machine. The motive in this attack remains unclear to this day.

How to prevent watering hole attacks?

By definition, you can’t protect yourself from a zero-day vulnerability exploit. You can’t defeat what you don’t know exists. However, there are ways to mitigate the risks.

Set up and perform regular vulnerability scans. Again, this may not protect you against zero-day exploits because the vulnerability scanner vendor won’t be aware of it either. And scanning alone will never be enough in itself. Still, it’s worth doing for the ability to patch the vulnerabilities it does find and will also help in hardening your web server.

Make sure to install security patches as soon as you can. Updated software is one of the best defenses against all types of online attacks. But a security patch won’t do much for you if an attacker crafts an exploit before the security update is applied. The longer the delay in applying the security update, the higher the risk of a zero-day attack occurring.

This is a big one, and it applies to more than zero-day exploits. Don’t trust user input on your website/application. If you require user input perform input validation to prevent malformed data from entering your system and potentially compromising it.

Opportunistic watering hole attacks may be discovered by web gateways that detect known attack signatures. But more often than not, these advanced attack vectors from sophisticated cybercriminals will require more dynamic security solutions that can detect, monitor, and block malicious activity and prevent users from accessing suspicious websites.

The following best practices will help organizations prevent their networks and users from falling prey to watering hole attacks:

Use a secure web gateway

It’s recommended to set up a secure web gateway (SWG). An SWG filters out web-based threats and enforces acceptable use policies. With an SWG, users first access the SWG instead of directly connecting to a website, which then connects them to the website, weeding out and blocking any offending network traffic. This helps ensure that members of the organization can browse the internet securely. It also helps prevent malware or rootkit downloads and blocks access to malicious sites – which is crucial in avoiding watering hole attacks.

Keeping your systems and software updated and installing operating system patches as soon as they are available is essential in mitigating watering hole attacks and any other type of online attack. Updated software is your best bet in defending against the latest known software vulnerabilities in the applications you use online.

Treat all traffic transiting over your organization’s network – especially third-party traffic – as untrusted until it’s validated as being legitimate. Not only will this enhance your organization’s resistance to many kinds of online threats, but it’s always good to be aware of what’s happening over your network. It also enables you to detect irregular traffic patterns.

These common-sense measures will help users avoid watering hole attacks and many other online threats.

So those are the ins and outs of watering hole attacks. The attack itself is, once again, more of a multi-pronged strategy than a specific vulnerability and exploit. And because it tends to rely on zero-day vulnerabilities, you’ll want to do everything you can to limit your chances of having one crop up in your systems. But, unfortunately, your protection will never be 100%. The best you can hope for is better odds. And to do that, you should put as many of the above tips as you can into practice.