What are a zero-day exploits and vulnerabilities?

Software vulnerabilities are quite common but if even one of them turns out to be a zero-day, the damage could be massive. We look at what zero-day exploits are and what you can do about them.
Marc Dahan Specialist in online privacy 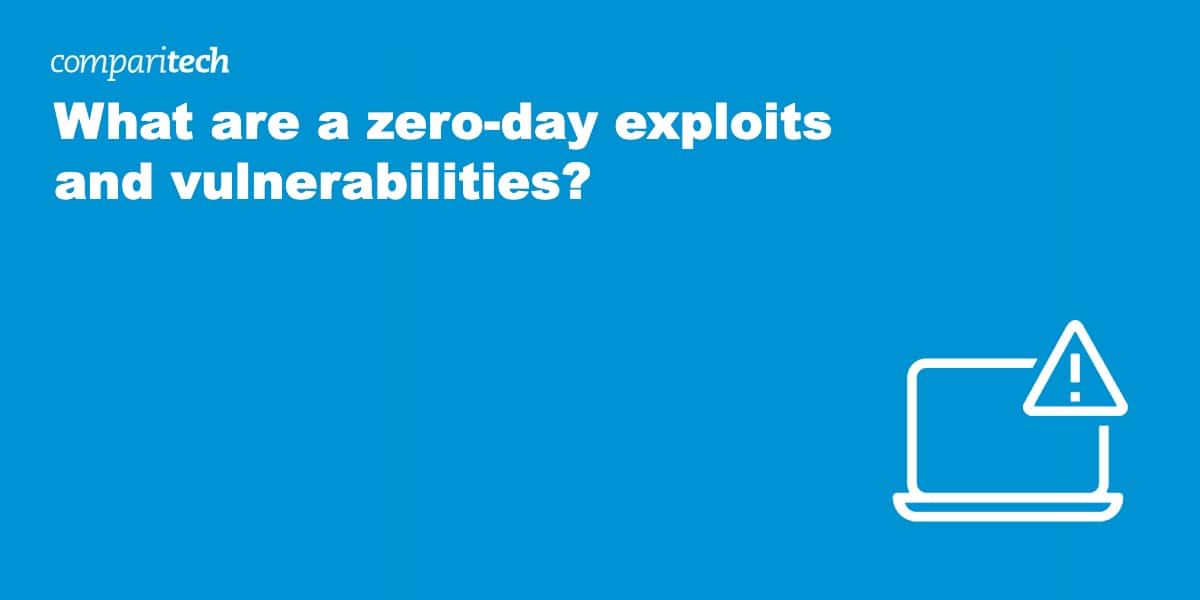 You’ve probably heard the expression “zero-day” before. The term was initially coined to describe pirated media (music, movies, software, games) in the early days of file-sharing. Pirated media was referred to as a “zero-day” when made available on the same day or before the official release. It is made public zero days after it is officially released.

A zero-day exploit is quite simply an attack that exploits the zero-day vulnerability to compromise a user, system, app, network, etc. And by the time the vendor becomes aware of it, they have zero days to fix it, as it’s already been actively exploited.

How do zero-day exploits work?

Bear in mind that it can sometimes take years for organizations to realize their code hosts a zero-day vulnerability – or worse, that they’ve fallen victim to a zero-day attack and were unaware of it.

What do zero-day exploits target?

A zero-day vulnerability can be found in anything that was coded (software) and in the components that support the code (hardware). Anything that resembles a computer (and let’s face it, what isn’t a computer today?) can contain a zero day.

A zero-day attack can exploit vulnerabilities in a wide variety of systems, such as:

IoT devices are particularly problematic since users typically have minimal access or control over them. IoT device users need to rely on the vendor to issue firmware updates and security patches. There’s not much you can do on your own with those devices (including your connected car).

Consumer routers face the same issue. These off-the-shelf devices tend to be used for years, if not decades, and software patches for these devices are incredibly rare. Many vendors would rather focus on producing and selling the next-generation model rather than spending their time and resources ensuring the security of existing devices.

In December 2021, Google’s Chrome browser was found to be vulnerable to a series of zero-day exploits. While Google quickly issued updates, it did not disclose the nature of the vulnerabilities it found. That was to prevent them from being exploited further before users had time to update. Nonetheless, it was revealed that the vulnerability originated from a bug in the V8 JavaScript engine used by the Chrome browser.

In May 2021, Apple’s iOS and iPadOS were revealed to be vulnerable to two zero-day exploits. Both of the vulnerabilities affected the operating system’s browser engine, Webkit. Webkit is the default backend for web browsers running on the platforms. Hence, third-party browsers were also affected. The exploit allowed for the execution of arbitrary code on the device after it processes maliciously crafted web content – that’s Apple’s way of saying a malicious URL. Both the vulnerabilities have since been patched.

In April 2020, a zero-day vulnerability was found in Zoom‘s popular video conferencing platform. The vulnerability affected Zoom software on both PC and Mac. The attackers injected code into the machines of users who clicked on a malicious URL sent to them through the application’s built-in chat functionality. Zoom issued an update that patched the vulnerability a few days after the disclosure.

In 2019, Microsoft Windows was found to be vulnerable to a zero-day privilege escalation attack. The targets were various government institutions in Eastern Europe. The zero-day vulnerability was exploited through a phishing attack. If the unsuspecting users clicked a malicious link or attachment, the attacker could compromise the user’s machine and escalate its local privileges. That allowed the attacker to run arbitrary code, install applications, and modify data within compromised applications. Microsoft quickly rolled out a security patch after the vulnerability became public.

In 2017, a Microsoft Word zero-day vulnerability was exploited to download the Dridex banking trojan onto victims’ machines. When users of Microsoft Word opened the maliciously crafted document, a prompt was displayed to “load remote content” to display the document properly. If the users clicked the button to allow the remote content, it would trigger the download of the banking trojan. Once installed, Dridex could do many things, such as deleting files or setting up its own virtual network. Another of its tricks was its ability to infiltrate web browsers, detect when a user is on an online banking web page or application, and inject malware or key-logging software to steal the user’s login credentials.

And let’s not forget Stuxnet: one of the most famous examples of a zero-day attack. Stuxnet was first discovered in 2010 when it was found to target Iran’s uranium enrichment plants in an attempt to derail its nuclear program. Stuxnet was initially found on USB thumb drives and quickly spread through Microsoft Windows computers. The Stuxnet malware targeted computers running programmable logic controller (PLC) software, which used Siemens’ Step 7 software. Step 7 is used by industrial computers serving as PLCs to automate and monitor electro-mechanical equipment. Once a Windows machine running Step 7 was found, Stuxnet would start sending damaging instructions to the electro-mechanical equipment controlled by the PC. Stuxnet would also send false feedback back to the main controller as that was happening. Those monitoring the equipment had no idea something was wrong until the equipment started to self-destruct.

How to detect zero-day attacks

The nature of zero-day vulnerabilities means that they’re detected once it’s too late (i.e., once they’ve already been exploited). While, by definition, you won’t be able to prevent the attack, here are a few things you can do to shorten your response time:

Again, this won’t save you from a zero-day attack, but cutting down your response time can significantly reduce the damage if such an attack were to occur.

How to prevent zero-day attacks

The main characteristic of zero-day exploits is being unknown (or known but currently unpatchable) rather than being a specific type of attack. Because of that, defending against zero-day attacks requires casting a wide net with general measures rather than targeted ones. Here’s how you can skew the odds of avoiding zero-day attacks more in your favor. But remember, nothing is 100% here.

So there you have it. Zero-day vulnerabilities and exploits are nasty business. And because you can’t specifically defend against them because they’re by definition unknown (or known but currently unpatchable), you need to rely on general security practices, like the ones above. They won’t protect you 100% of the time, but they’ll definitely reduce the odds of your organization falling victim to an attack. And all of the practices listed above are things you should be doing anyway.